10 Of The Weirdest ‘Star Wars’ Products Ever Made 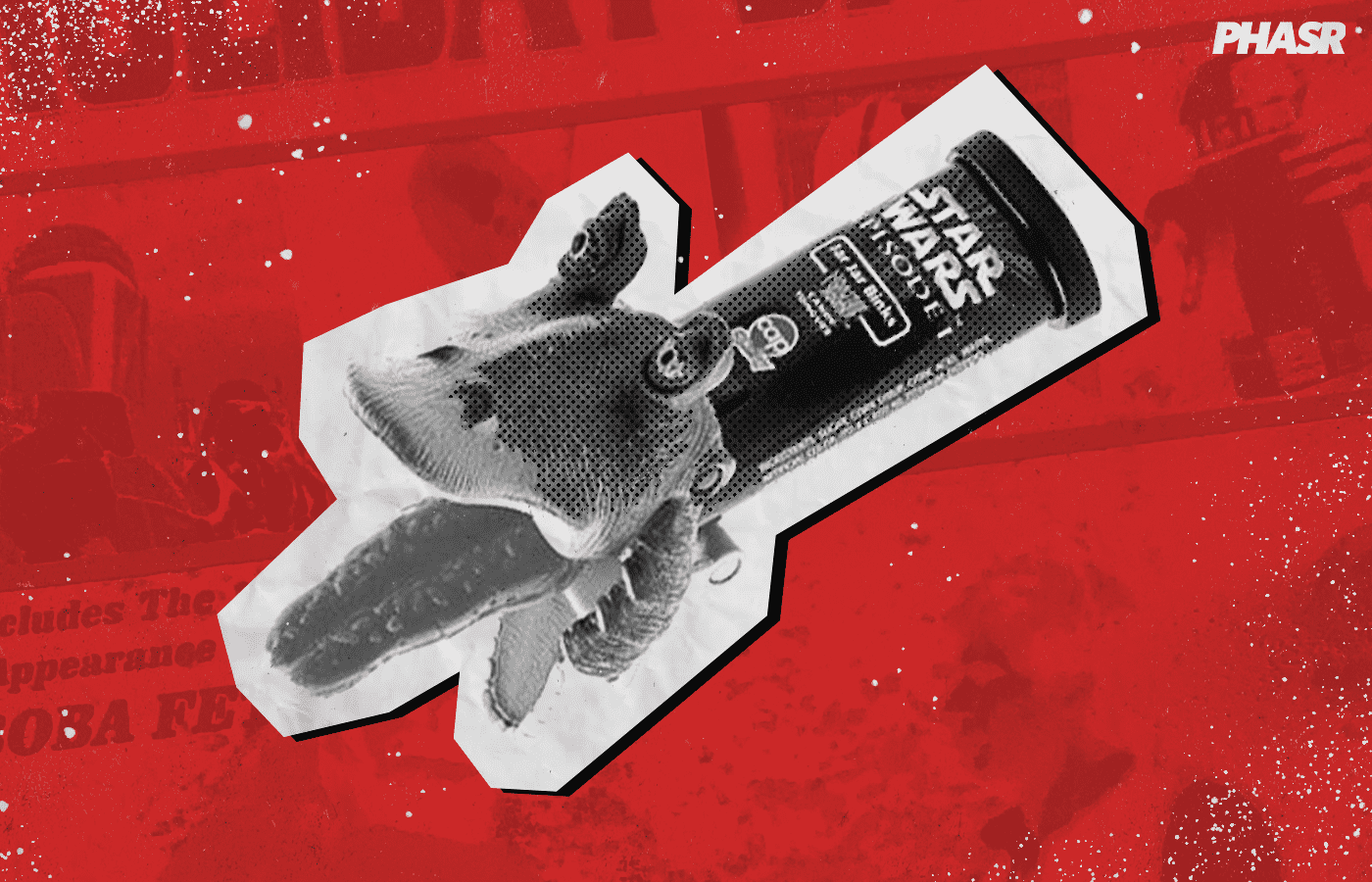 It goes without saying that Star Wars is one of the biggest franchises on Earth. With such a massive franchise though comes a dedicated fanbase. People love to show off their passions with t-shirts, bumper stickers, enamel pins, Funko POPS, and more. One thing that doesn’t get enough recognition in the Star Wars fandom is all the weird merch they’ve received from companies over the years.

Today we’re diving into the trash compacter of ‘A New Hope’ to show you some of the most bizarre and awful Star Wars merch ever made. From trading card misprints to poorly executed slippers, we’re covering it all. Fasten that seatbelt and hold on because these are the ten weirdest Star Wars products ever made!

Topps company released a series of trading cards to tie into Star Wars: A New Hope. The cards feature information about characters throughout the film with plenty of colorful details. Within this set of cards though is something entirely unexpected. On the front of card number 207, protocol droid C-3PO (Anthony Daniels) is seen emerging with what looks to be an anatomically correct droid dong.

In 2007, the official Star Wars website explained that the image was nothing more than a mishap. According to the Lucasfilm-endorsed explanation, a piece of the costume became loose at the precise moment the photo was taken, lending the character the appearance of mechanical arousal:

“…[It] appears that the extra appendage is not the work of an artist, but rather a trick of timing and light. The untouched archive photo shows the image just as it appears on the card. The current theory is that the instant the photo was snapped, a piece fell off the Threepio costume, and just happened to line up in such a way as to suggest a bawdy image. The original contact sheets from the photo shoot attest to this. They are not retouched in any way, yet still contain the same image. Whatever the real explanation is, the ‘mischievous airbrush artist’ scenario simply doesn’t fit.”

The Jar Jar Binks lollipop is infamous amongst Star Wars fans. Jar Jar was perhaps the most unfortunate thing about Star Wars Episode I – The Phantom Menace but Lucasfilm thought they had another Chewbacca on their hands. Companies took their chance at merchandising the character in some of the most bizarre ways, one of which ended up with you French kissing the most maligned Star Wars character to date.

The internet hasn’t forgotten about this misstep in merchandising either. We highly recommend searching ‘Jar Jar lollipop’ on Twitter when you need a little pick-me-up. To quote Twitter user @HelloGreedo: “You aren’t a real #StarWars fan if you never sucked on this Jar Jar lollipop.”

RELATED: The Book Of Boba Fett Season One Review

Do you ever feel like violently crying in the shower? Well, now you won’t be alone while you do it. Introducing the Darth Vader showerhead. This very real and still very available-to-purchase shit post of merch will scream to others how much you’re into Star Wars. It’s the perfect way to turn your shower into your own empire. And you’ll find the many features of this shower head impressive… most impressive. It has a rubber grip designed to reduce slipping, a comfort control lever that adjusts water pressure, and 3 spray settings.

We’re not even going to describe this one but instead please enjoy the copy featured on the back of the box:

Chains cannot restrain your smoldering sensuality even when the most despicable scum in the galaxy surround you. Whether you’re on a daring rescue mission or are being held captive by a nefarious slug/gangster, your regal bearing lets the world know that despite appearances, you’re no one’s servant. Fearless and inventive, Slave Leia Perfume includes floral top notes of white peach, lily, bergamot, heliotrope and raspberry that dry down to a warm sultry mix of cashmere woods, musk and night-blooming jasmine. Slave Leia Perfume: More powerful than a thermal detonator yet more comfortable than a metal bikini!

There are definitely some strange product tie-ins for certain films. Sometimes you’ll see a movie-themed basketball, a water bottle, maybe even a bag of chips. But have you ever seen a movie-to video game tie-in advertised on an airplane’s vomit bag? Maybe having your video game associated with people getting sick isn’t the exact message you want to willingly put out there.

Want to create one of the grossest scenes in Star Wars history where our main hero guts an animal to stop himself from freezing to death? Yes? What’s wrong with you. Well now you can with this high-quality sleeping bag that looks just like a Tauntaun, complete with saddle, printed internal intestines, and a plush lightsaber zipper pull. 100% Polyester construction. One size fits all. Enough room for adults; plenty of space for kids.

Have you ever wanted your pet to look as big of a nerd as you are? Well, let me introduce you to the Bantha dog costume. You can guarantee your dog seeking its revenge on you this May 4th when you put them in this highly detailed piece of licensed Star Wars merchandise. Even the dog in this photo isn’t quite sure about it. Just don’t be surprised when they go to the bathroom on your favorite rug.

Kill it, kill it with fire. These absolutely cursed slippers will make any Star Wars fan want anything else on their feet, even Wookie Crocs. We’re not even sure if this is Yoda, it looks like some other life form wearing Yoda’s flesh. Regardless, these slippers are made of soft material and will deliver all-day comfort with a lightweight and breathable feel. Made in collaboration with the official Star Wars brand, your little Jedi can rest easy knowing they’re getting the real deal.

Ever feel a little sluggish in the morning? I’m going to hell. Get a head start with this Jabba-inspired coffee mug. You’ll be scared by the look of it way before the caffeine hits your system, we guarantee it. It’s also microwave safe, so please don’t try to blow it up.

What’s The Weirdest Piece Of Star Wars Merch On This List?

What piece of Star Wars merch is going to haunt you for the rest of your days? Let us know on social media!