12 Ounce Mouse is a completely underrated masterpiece of avant-garde psychological horror and no; you cannot change my mind. 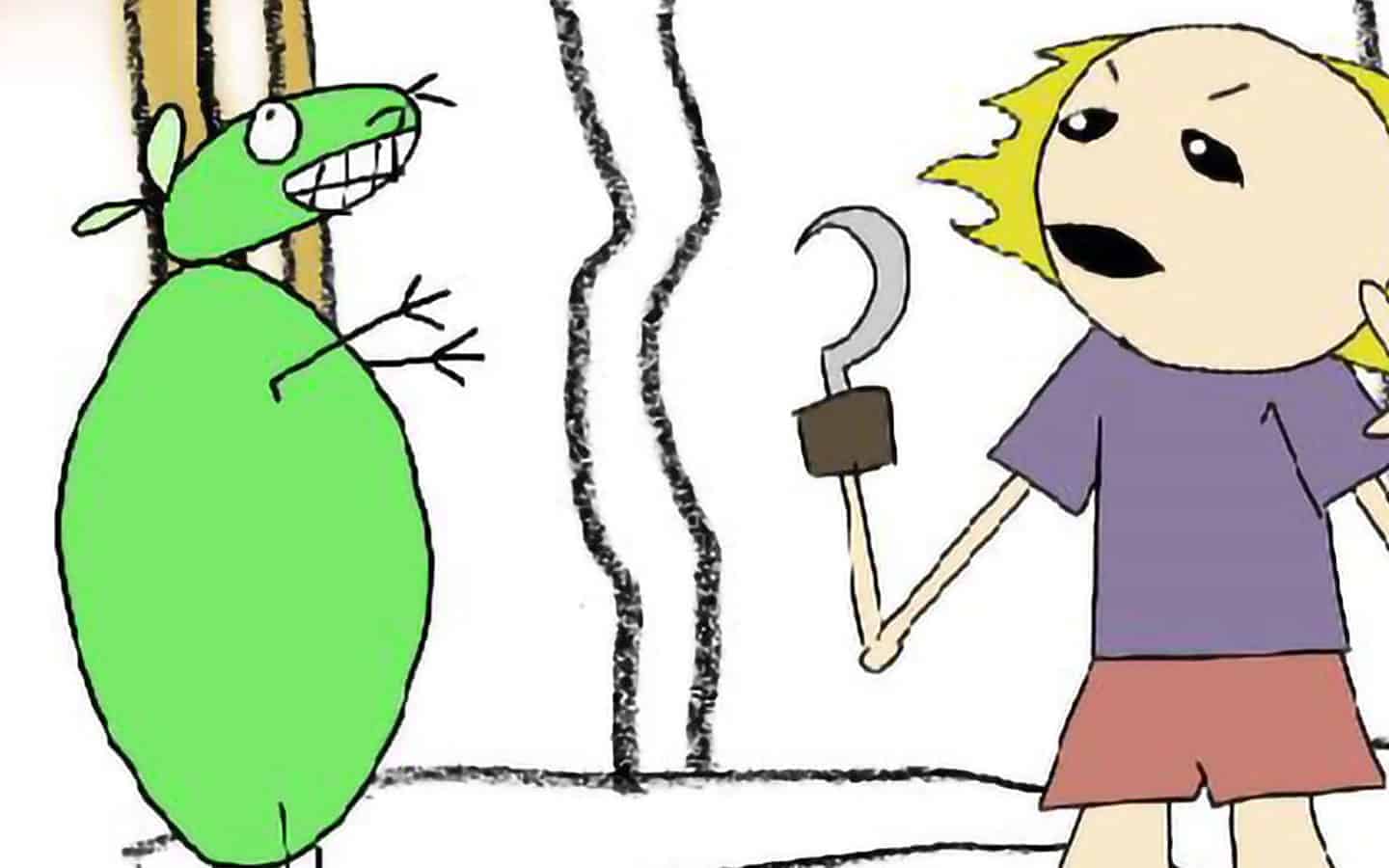 You cannot change my mind about this.

In this era of endless show revivals, an unsung masterpiece of a late-night comedy show has finally seen a second coming. Fifteen years after its last episode; one of the most maligned shows on Cartoon Network’s late-night programming block, Adult Swim, was infamous for its atrocious art style, even among a network that features shows about Southern hillbilly squids and giant talking food monsters from New Jersey. I’m talking about the 2005 release, called 12 Ounce Mouse. The series has made a triumphant return for its third season, available on the Adult Swim website now, so long as you have a cable television provider.

12 Oz Mouse (or 12 Ounce Mouse, spelled both ways) follows the exploits and antics of a poorly-drawn, lime green mouse known as Mouse Fitzgerald (I know how it sounds thus far, but bear with me). Mouse spends his time robbing banks and breaking into the local Guitar Center to play a mean solo on a stolen bass. When he’s not doing these things, Fitz is probably busy shooting at planes or breaking out into an offbeat melody.

All of the aforementioned things occur in the first episode alone, and in this chaos, the show very quickly establishes the rules of this town; there are no rules.

Mouse even ends the first installment by trying to shoot his employer, and when that doesn’t work, immediately attempts to pistol-whip him before returning to his seat when all of his efforts are in vain. 12 Oz Mouse delves into levels of insanity on par with regular Adult Swim programming at a rapid-fire pace.

But, within the timeframe of only a handful of episodes, an interesting shift in the tone of the show occurs. Sometime during his boozing, Fitz comes to the realization that something is horribly wrong in paradise; he is unable to remember the past, his past, beyond the nondescript city he calls home, and he is plagued by a manner of cryptic dreams. In some of them, he is a husband and a father to a newborn baby-girl mouse.

In these memory fragments, he seems like a happier mouse. He expresses concern over his newborn child’s weight (“Is she [the baby] supposed to be that small?”). In another memory, he is at the beach with his family. And, overall, in these glimpses into a different life, he seems like a much better person, a far cry from the character that’s perpetually drunk and constantly robbing local businesses. It’s implied in one of the flashbacks, that he was drugged, kidnapped, and forced to undergo a number of brutal experiments, snatched from his previous life and drained of his memories; and Fitz soon discovers that everything around him is a very elaborately-constructed simulation.

And by the end of the first season, Mouse Fitzgerald has undergone a character arc, from lawbreaking public nuisance to antihero, and starts taking things into his own hands to make his triumphant return to his wife and child.

After the initial hump of the first few episodes, the show really gets the ball rolling, changing from a comedy to a horror-comedy-drama. I’d go so far as to draw comparisons to this, and director David Lynch’s Twin Peaks, in terms of both shows possessing surrealist elements, while others have likened it to the 2015 HBO hit True Detective, citing both shows mysterious, seemingly disconnected dialogue.

Mouse: I know. No one knows who you are. Congratulations.

Besides its abysmal art direction, I’d argue that the show is, in part, much maligned because of the precedent set by other Adult Swim works; Squidbillies, Aqua Teen Hunger Force and Robot Chicken, three of the network’s most well-known shows that were released around the same time frame as 12 Ounce Mouse, do not follow a running plot—meaning, each episode has no bearing on the next. The content of these works often rely on comedy without any rhyme or reason, and Matt Maiellaro, the creator of Mouse, allegedly intended to pull the show in the same direction, before deciding on a plot after the second episode. But, unfortunately, many wrote off 12 Ounce Mouse, thinking it would follow in the footsteps of its forefathers, a random comedy for the sake of being a random, awfully designed comedy, without giving it the time of day.

To draw from an example: in a video released by popular film critic Mr. Enter critiquing the first episode of the series, he is immediately, like most people, turned off entirely by the atrocious art style, and the non-sequitur, random sounding dialogue, and decides the show is nothing more than drivel aimed at mocking post-modernist works.

And don’t get me wrong; there are a lot of elements thrown into the show that are absolutely nonsensical. When he’s completely drunk, Mouse will break out into song; he flies around in a spaceship; there’s a man that farms corndogs and plays the acoustic guitar with a hooked hand, and a peanut-shaped cop that is perpetually hitting a blunt whenever he’s on screen.

There’s a giant robot shaped like a corndog that’s programmed to wipe out the city, and mini robots shaped like bowties used for as a weapon to core out the chests of whatever unfortunate victim wears them. And, to an extent, the show really is just a big, obvious, middle finger from Adult Swim and Matt Maiellaro to sense. But the underlying plot that presents itself is far too interesting to abandon, even if the art style looks like something haphazardly doodled in a Chili’s dinner napkin.

Adult Swim and The Rise of Surreal Horror

What is surreal horror, exactly? Surrealist works are defined by certain fundamental traits, which include: an interest in the dream or nightmare state, and characters who are act free of moral or logical restraints.

Therefore, surrealist horror is defined mainly as horror that comes from something out of a nightmare—horror that does not abide by logic, or the laws of the universe as we know them. Surreal horror is something that comes straight from your deepest dreams, and rarely are explainable things, and movies like this David Lynch’s Eraserhead, the 1977 release House (Hausu) directed by Nobuhiko Obayashi and David Cronenberg’s Videodrome are all examples of surrealist horror.

This new age of surreal horror has amassed millions of devout followers, and Adult Swim has certainly been at the forefront of this revival—Too Many Cooks, Unedited Footage of a Bear, and This House Has People In It, are examples that immediately come to mind, the starter essentials for anyone interested in modern horror surrealism.  In Too Many Cooks, we are treated to a generic, 90’s sitcom opening becoming more and more deranged, as each character is hunted down by a serial killer. In Unedited Footage, an extra in a decongestant commercial must go toe to toe with her own doppelgänger. And in This House Has People, an unassuming suburban family must confront a situation straight out of their worst nightmares when one of them gets stuck in the floor. None of these shorts, all of which have gained cult followings, are far cries from the plot of 12 Ounce Mouse.

The Adult Swim big three are only the beginning of an extensive, popular genre; the works of Alan Resnick (specifically alantutorial), and the web series’ Petscop and Marble Hornets are two more examples of surrealist horror works, with dream-like, illogical aspects to their stories. Entire youtube channels with followings of millions, like Night Mind and Nexpo, are dedicated to deep, sometimes hours-long explanations where they try to piece together some kind of meaning from surrealist works.

And with the rise of this type of media, that appeals to the curious side of humanity, keeping us on edge in anticipation of what will happen next, it was only a matter of time before 12 Ounce Mouse finally found itself in the limelight once more, with a growing fanbase excited for the show’s return.

While the first season is primarily surrealist, psychological horror, as Fitz begins to question his sanity, eventually devolving into the existential crisis of realizing that his world is not real, the second season is primarily devoted to Fitz and the other characters fighting their way out of this world. The third season takes place after the thirty-minute special released in 2018—where Fitz is thrown back into another faux-reality after escaping the first one, and if the teaser is anything to go by, we may be seeing glimpses of a wider, fleshed out universe that our lime-green protagonist will be forced to navigate.

Personally, not only am I excited for the return of drunk mouse antics, but I also urge fans of psychological horror to at least sit through the first couple of episodes of the first season, available on the Adult Swim website. It picks up immediately, and the maligned animation of the show quickly becomes tolerable, and then integral to the plot—it helps drive the feeling of being trapped in a nightmare. It’s certainly not for everyone, but I fully subscribe to the belief that 12 Ounce Mouse is a completely underrated masterpiece of avant-garde psychological horror and no; you cannot change my mind.