Here are thirteen ghastly books about horror movies and why you need to read them! 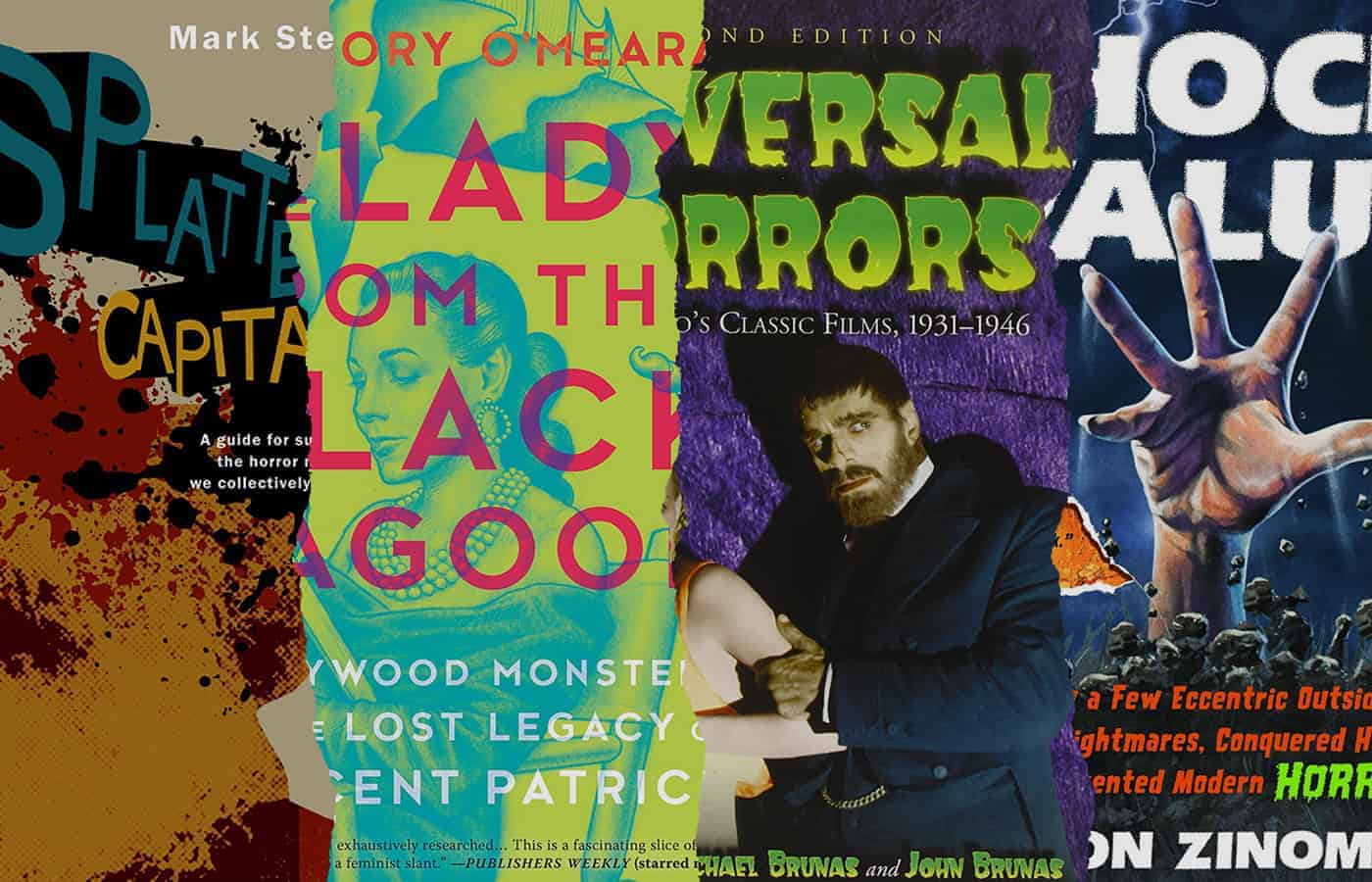 Here are thirteen great books about horror movies and why we love them to death!

It wasn’t until the early 1990s when cable television was easily accessible in my hometown. Many people had satellite dishes where I grew up, but my parents refused to have one of those ugly things (this was before the small, compact window-mounted models) in the yard. Because of this, my first exposure to horror films was actually through a book.

By the late 1980s, most of the old horror hosts were long gone. If you did not have cable or a well-stocked video store, there was no way to see classic horror films. My local public library, however, was well stocked in the Crestwood House Monster Series.  When I was four years old, I checked out the volume on Frankenstein Meets the Wolf Man. On the last page of each Crestwood House monster book, King Kong appears and says “I suggest you read about my friends!” I took him up on his offer and I have been hooked on horror ever since.

I enjoy reading about horror films almost as much as I enjoy watching them. This list of books about horror movies is the result of decades of reading about horror. Before I begin, I would like to give a couple of disclaimers and explain how I organized the list. The list is broken into three sections: surveys of genre history which cover multiple decades, books that primarily focus on horror films from the 1920s to the early 1960s, and books that focus on the last fifty years of horror cinema.

The Monster Show: A Cultural History of Horror

Nearly thirty years after its publication, The Monster Show: A Cultural History of Horror remains the greatest one-volume history of the first century of horror. This made our list of greatest books about horror movies because Skal takes the reader through the Jazz Age, silent thrillers of Tod Browning and Lon Chaney, and ends with Silence of the Lambs. Along the way, Skal intertwines film, history, and American culture to show how horror has reflected our deepest and darkest fears. The book covers the seventies and eighties golden age of horror cinema, yet it is a much better source for the forty years between the Silent Era and the “Monster Boom” of the 1960s.

Horror Noire: Blacks in American Horror Films from the 1890s to Present

Jordan Peele’s Oscar-winning film Get Out led to an explosion of interest in horror with African-American themes. Coleman’s book, published a few years before Get Out seemed to anticipate this new emphasis on Black studies in horror. In 2019, Shudder adapted Coleman’s book into an excellent documentary. In the original book, Coleman traces the portrayal of Black Americans in horror, from the racist images of the Jim Crow Era to the more varied representations in the late 2000s. Coleman focuses on some of the little-known “poverty row” horrors of the 1930s like Chloe, Love is Calling You,  infamous “Blaxploitation” seventies horror films like Blacula, 90s cult favorites such as Candyman, and many more. Horror Noire is one of the most important books about horror movies and about horror criticism as a whole.

No other writer has as many great books about the horror genre as Skal. Screams of Reason traces the hybrid genre of sci-fi horror from Mary Shelley’s Frankenstein to the disastrous 1996 production of The Island of Dr. Moreau. Like The Monster Show, the book intertwines horror movies and history. Skal shows how examples of real-life “mad science” such as conspiracy theories, quack medicine, and apocalyptic religions are reflected in horror pop culture. This book is a great examination of horror’s relationship with our collective fears regarding science and technology.

The Art of Horror

The Art of Horror is a large coffee table art book that is an essential part of any horror-head’s bookshelf. The book contains hundreds of horror related images gathered from movie posters, book covers, paintings and other sources. The book is organized by topic with chapters dedicated to subjects such as mummies, H.P. Lovecraft, slashers, and vampires. Each chapter begins with an introduction by luminaries of the genre. Jones also edited a sequel entitled The Art of Horror Movies which is not quite as essential as The Art of Horror.

Horror! The Definitive Companion to the Most Terrifying Films Ever Made

This book has been sold under a few different titles. My copy is actually titled Horror! 333 Films to Scare You to Death, but the text is mostly the same. Horror experts Newman and Marriott compiled the greatest list of essential horror movies ever made. This book is an ideal starting point for a new horror fan. If you are a self-styled horror aficionado who does not want to miss any hidden gems, this is a great book. Horror! lists the must-see films for each decade, stopping at the 2000s. Most of the book consists of Newman and Marriott’s short movie reviews, but they make occasional detours to discuss specific horror film topics.

An Illustrated History of the Horror Film

Originally published in 1967, An Illustrated History of the Horror Film was one of the first serious critical surveys of the genre. The book remains one of the greatest overviews of the first fifty years of the horror film. Clarens was an erudite critic and his insights on the genre have held up in the fifty-three years following their original publication. His chapters on Georges Méliès and the German expressionists are stellar. His later chapters, which focus on the Italian and British films of the late 1950s and early 1960s, are also excellent.

There have been many books written about the Universal horror films of the 1930s and 1940s, but legendary horror historian Tom Weaver’s Universal Horrors is the definitive work on the subject. At nearly six hundred pages long, this is a textbook-sized guide to the world of Universal Monsters. The book contains production histories for each of Universal’s horror films made during the fifteen years covered by the book. Weaver gives in-depth looks into famous films such as Dracula and Frankenstein while also covering lesser-known films like The Mad Ghoul and the Inner Sanctum series.

This book covers horror from the 18th century to the 1980s, but I am including it in this section because the bulk of the book is composed of Twitchell’s analysis of the great classic horror icons: Dracula, Frankenstein, Mr. Hyde, and the Wolf Man. His last chapter, “A Modern Bestiary” focuses on other horror staples like zombies and serial killers. Twitchell gives each member of the monstrous menagerie a psychosexual modernist interpretation. Dreadful Pleasures is one of the first books to deeply examine the symbolic significance of horror cinema.

The Lady from the Black Lagoon

This book is a biography of Millicent Patrick, the designer of the Gillman of Creature from the Black Lagoon. O’Meara mixes autobiography, biography, and social history to tell Patrick’s story. Not only does the book offer a look behind the scenes of one of the greatest monster movies of the 1950s, but it also shows the challenges faced by women working in the Hollywood studio system. The Lady from the Black Lagoon also touches on O’Meara’s own experiences in the present-day horror community. The book shines a spotlight on one of Hollywood’s great monster makers while also drawing attention to issues still present in horror fandom and filmmaking.

Shock Value chronicles the transformation of the horror genre in the ten years between 1968 and 1978. The main players in Zinoman’s history include Wes Craven, John Carpenter, Dan O’Bannon, and Tobe Hooper. Zinoman writes about the creation of such famous films as Rosemary’s Baby, The Exorcist, The Texas Chainsaw Massacre, and The Last House on the Left. During the late 1960s and early 1970s, these shocking films changed the genre forever and made the horrors of Hammer Films and William Castle seem quaint by comparison. Shock Value is the definitive recounting of how this change happened.

This text is one of the first book-length explorations into the “folk horror” sub-genre. Scovell gives special attention to the “unholy trinity” of folk horror: The Wicker Man, Witchfinder General, and Blood on Satan’s Claw. Scovell also writes about folk horror tropes which pop up in other films like Peckinpah’s Straw Dogs and in television shows like Doctor Who. Modern horror filmmakers such as Ben Wheatley, Ari Aster, and Robert Eggers have helped bring about a renaissance in folk horror. Scovell’s book illuminates the themes and iconography that defines the sub-genre.

Men, Women, and Chainsaws: Gender in the Modern Horror Film

It is impossible to overstate the importance of this book in the field of horror movie criticism. Clover, a Scandinavian literature expert, forever changed how the 1970s and 1980s horror films were perceived. Clover examines the complicated depictions of gender in slasher movies, supernatural possession stories, and ultra-violent “revenge” films. The now-familiar term “Final Girl” originates in this book. Before this book, the critical consensus around horror (specifically slashers) was that they were nothing more than misogynistic exploitation films catering to audiences’ worst natures. Clover does not completely disagree with that assessment, but she demonstrates that the interactions between audience and film are much messier than once believed. Gender and sexuality remain one of the most important topics in horror and this book still influences how we think about horror films.

In this short book, Mark Steven demonstrates that gore-filled horror films are fantastic teaching tools for exploring the inherent contradictions in capitalist systems. He notes how the relationship between Marxist theory and the slasher film has existed since Soviet filmmaking pioneer Sergei Eisenstein perfected the editing techniques which made the slasher film possible. Steven notes how films like The Texas Chainsaw Massacre, Blood Feast, Dawn of the Dead, and Videodrome all reflect the disposable nature of workers under American capitalism. Steven also writes about the relationship between colonialism and Italian cannibal classics like Cannibal Holocaust and Cannibal Ferox.

This list is meant to give the reader insight into the history of horror films and to provide analysis into many of the most important topics in horror criticism. It is not meant to be definitive. This list is meant to be a starting point. These books cover films from the silent era to the late 2000s. Hopefully, I can update this list with works on movies like Get Out, Midsommar, Raw, and other great horror films of the 2010s.