A Horrifying History of Halloween Horror Nights: 30 Years of Fear 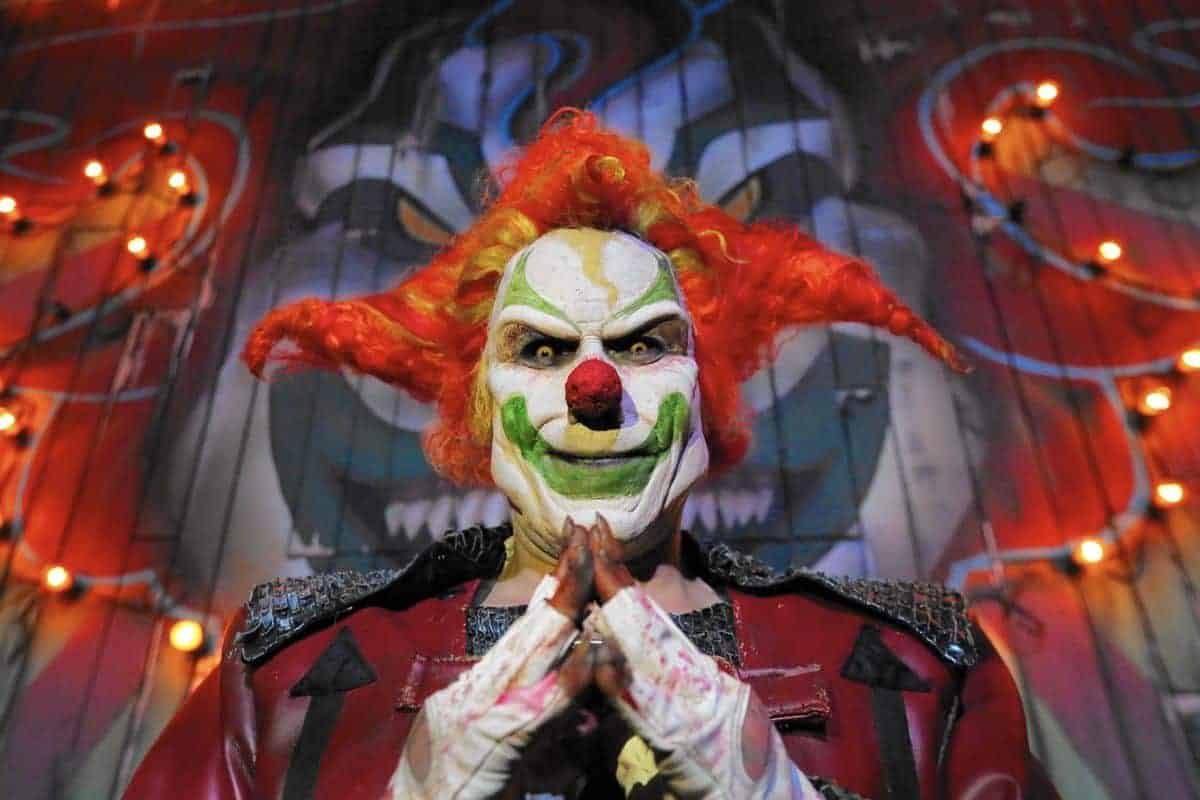 The 2020 Halloween season is upon us. Spirit Halloween locations have begun to open, the craft stores have started to prepare for our favorite time of year, and ordinarily, we’d be getting ready for the opening weekend of Universal’s Halloween Horror Nights. Unfortunately, we’ll have to wait a while longer for Halloween Horror Nights 30, but this gives us a perfect excuse to look back and reminisce on the last 29 years of terror.

What sets Halloween Horror Nights apart is both the creative flavor the event has developed over the years and the resources Universal Orlando has at its disposal. Being a film studio, the parks are able to take advantage of their soundstages to produce incredibly detailed and elaborate sets to bring a wide cast of characters and stories to life. Universal has created an ensemble of their own for the event, as well as licensed out some classic films to adapt to haunted attractions including The Exorcist, John Carpenter’s The Thing, and An American Werewolf In London, just to name a few. But this wasn’t always the case. Horror Nights started out much smaller and with a totally different name.

Halloween Horror Nights started out in 1991 as “Fright Nights at Universal Florida”. Fright Nights only ran for 3 nights at the end of October and had only one house – The Dungeon of Terror. The event featured Universal’s Classic Monsters and Beetlejuice, and a slew of shows. The next year brought a bigger event and the new name – “The Second Annual” HHN. 1992 saw the return of the Dungeon and added The People Under the Stairs, the very first movie-based house.  It also marked the beginning of what would become a staple of the event: Bill & Ted’s Excellent Halloween Adventure.

Bill & Ted’s began as a tie-in to promote Bill & Ted’s Bogus Journey but was so popular and beloved by the fans and creative team that it ran from 1992 all the way until 2017. It was a half-hour-long comedy show that parodied pop culture from the previous year, the show served as a great comedic relief and a break throughout the night. Bill & Ted was consistently a bright spot because the actors would ad-lib and swap jokes around, which always made it rewarding to see the show as many times as possible throughout the year. It was a huge highlight because of all the talent behind it and it’s still sorely missed.

Halloween Horror Nights V in 1995 gave the event its first mascot character, The Cryptkeeper from HBO’s Tales from the Crypt. He was prominent in marketing and was featured in that year’s take on the Dungeon of Terror. This mascot format was a way to give the event a face, and in doing so would pave the way for the golden years of the event with the introduction of some all-new characters created just for HHN.

Between ’95 and ’99, the event featured “icons” in the form of artwork to represent the event (a gasping mummy, an eyelid-biting demon), but for the 10th anniversary of the event in 2000, the creative team wanted to try something different. They set out to design a character specifically for Horror Nights who could not only represent the event but take things to the next level.  It’s said the creative team surveyed day guests in the park to find out what they were afraid of, and the number one response… was clowns.

Jack the Clown is the first original Horror Nights Icon and is practically synonymous with the event. He’s loved by fans and the creative team and regularly reappears, especially during anniversary years. Jack was given an elaborate backstory that was released as part of the marketing and theme of HHN X in 2000; he was a murderous clown in Dr. Oddfellow’s traveling Carnival.

Once the police started to notice the string of disappearances lined up with the carnival’s shows, Jack started to get worried. He confessed his dark secret to Oddfellow but instead of helping him, he had Jack killed and his body hidden away in the House of Horrors. Years later a documentary crew finds the dark ride and once inside stumbles upon a large box painted like a toy with one letter filling each side, J-A-C-K. The cameraman turns the crank on the side, and out pops Jack’s decomposing corpse on a spring.

The theme for Halloween Horror Nights X was that Jack’s story had become an urban legend and Universal was using it to promote the event, going as far as to buy the supposed real House of Horrors and props to use in the park, including the box Jack was trapped in for so many years. When setting up for the event, an employee turned the crank to test the legend and unleashed Jack on Universal Studios for the very first time.

Jack is an incredibly fun character. He’s sadistic, twisted, egotistical, and I feel he really embodies what Horror Nights is. It’s a month-long gory, spooky, fun Halloween party. Having a ringmaster character like him pulling all the strings just ties everything together so well.

Naturally, Jack was a huge success. In the following years, Universal continued to create a new Icon whose story would set the stage for the year. Following in Jack’s bloody footsteps would come: a Caretaker who would show us the darker side of the Islands of Adventure, a Director who wanted to put real fear on film, with you as the star, and a Storyteller who told us of a dark fantasy realm ruled by a bloodthirsty Queen. These original four celebrated Halloween Horror Nights’ Sweet 16 in 2006 when each returned and brought their own haunted house with them.

There continued to be new Icons created until 2012, along the way we met a vengeful theater Usher, the urban legend of Bloody Mary brought to life, a two-faced Lady Luck, and even Fear himself. Even Jack’s sidekick, Chance, had her time in the spotlight – as a recurring character returning to take the reins. It’s always a treat to see what Universal can do with some of your favorite horror flicks, but the Icons give Halloween Horror Nights its unique identity.

Once Upon a Time in Ohio

Beyond the Icons themselves, there is a wide cast of macabre characters and stories and much of them are tied to the town of Carey, Ohio. Throughout the years, Carey has been a hotspot for supernatural and bizarre occurrences and goings-on. If a haunted house isn’t based on an existing movie or TV series, it typically will be set in the fictional town.

Carey is home to a haunted theater, an overrun mental asylum, a psychiatrist’s office run by Bloody Mary, a homicidal late-night horror host, a butcher shop run by cannibals, a paranormal investigation agency, and has a sewer full of mutant creatures.  Just to name a few. Why Ohio? It’s an homage to a member of the Creative team, they grew up in the real Carey.

The unique houses that are set in the town tend to be the fan favorites; several of them have had follow up houses or have been built on by Scarezones in the streets. Aside from speculating which big movie will be the next landmark haunted house, these unique stories and characters are what keep the fans rabid in the long gap between November and the first announcements for next year’s event.

Halloween Horror Nights have left quite a mark on the locals. It’s not unusual to see HHN t-shirts out and about, even during the “off-season”. I’ve even seen several costumes of the Icons at events and conventions. Year after year, the event gets bigger and gains a bigger following. The bigger the fanbase, the more people discover and fall in love with Jack and his cohorts. There’s now a roaring fan art community and dozens of online boards discussing potential content for upcoming years, coverage of new merchandise, and just hopes and dreams for the future.

Sadly, we won’t have a 30th anniversary this fall, but luckily that doesn’t mean there’s no terror taking place in Universal Orlando this year. Despite the cancellation of the event this year, Orlando has still opened their Tribute Store – a one-stop shop for HHN swag. The highly detailed shop has become a tradition in the last few years and is a very elaborate tribute to the event and its atmosphere. Since the parks were already in full swing for the 30th before they pulled the plug for this year, there was already a full line of merchandise at the ready with some classic artwork from the event’s long history.

True to form, many of these pins and posters are tricky to get your hands on because despite the popularity of the Icons there’s typically not much in the way of merchandise. So for this big anniversary, they’ve finally rectified that, and it’s a testament to how big the event has become that they can’t keep them in stock.  They’re even offering face coverings with Jack’s face on them! All it took to get Icon merch was a global pandemic.

Halloween Horror Nights means a lot to a lot of people. From the casual haunters who attend every October to the die-hards who start discussing what this year could bring in February. For me, it’s a big Halloween party. It’s a living horror flick that you’re a part of.  It’s a 6-week celebration of monsters, the macabre, and all things spooky. HHN continues Universal’s Legacy of Horror that began with the movies in the ’20s; it pays homage to the roots and builds on them while constantly growing and adapting.

Through the characters and stories it’s told throughout the years, the event has now left a legacy of its own. It’ll be a long wait for 2021, but at least we can still look back to what sets Horror Nights apart and reminisce on the screams Universal has given us over the years.