A Legacy In Light (Sabers): A Star Wars Celebration 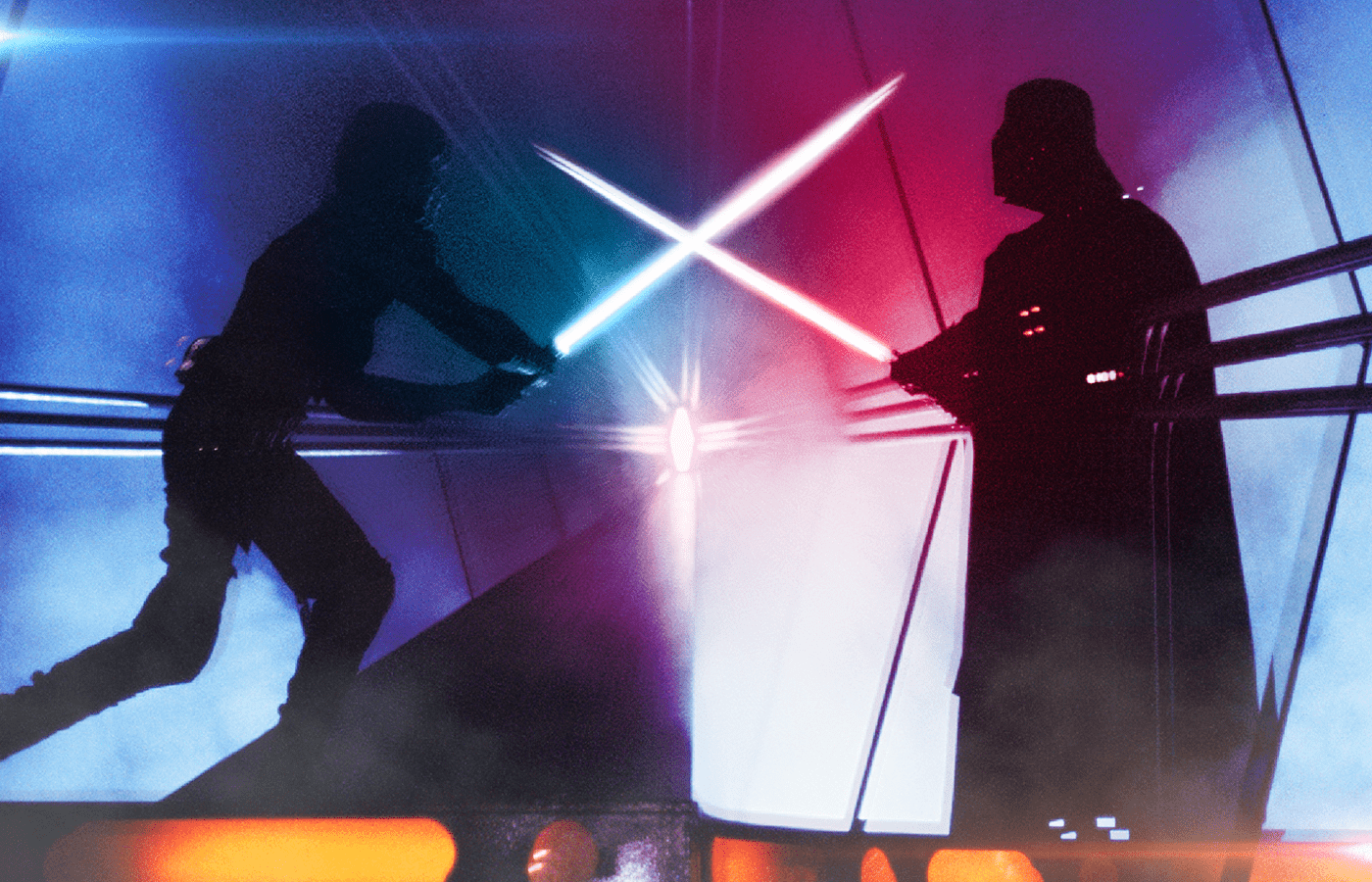 The History of Lightsabers in Star Wars

It’s May the Fourth, which for us nerds can only mean one thing… it’s Star Wars Day! There’s almost nothing that screams “Star Wars” louder than a lightsaber, an elegant weapon from a more civilized age. So to celebrate we thought it’d be fun to search the galaxy and round up some of the coolest sabers from our favorite Jedi, Sith, and everyone in-between. We also smuggled a few fun facts along the way. So grab some blue milk (or green milk) and let’s punch it!

Back in 1999, Darth Maul blew us all away when The Phantom Menace revealed that lightsabers could have two blades. Since then, it’s become a regular choice of force-users and even a heavily featured gameplay mechanic in the Jedi: Fallen Order video game.

“We had this big arena fight scene with all these Jedi, and I was like ‘ I want to be able to find myself in this scene.’ I said to George, ‘You think I can get a purple lightsaber? I’m like the second baddest Jedi in the universe.’”

In Attack Of The Clones, Mace Windu’s saber was the first new color since Luke’s green blade in Return Of The Jedi. Mark Hamill got an upgrade because the green would show against the blue sky above Jabba’s barge better than a blue one. But Mace Windu’s unique color was Samuel L. Jackson’s idea. Legend has it, George Lucas was reluctant to give him a purple blade but eventually gave in.

Darth Talon is a Sith Lady featured in the Star Wars: Legacy comic series throughout its 50-Issue run. If you haven’t seen her in Star Wars media, you’ve likely seen her through either cosplay or fan-art because despite her relatively low exposure, she is a fan-favorite villain. Her lightsaber hilt is thought to be made of Yorik Coral, a living alloy, with a very organic look.

Count Dooku’s trademark curved lightsaber hilt was designed to be elegant and sophisticated. A reflection of Dooku himself, these elements were chosen to reflect Christopher Lee. The hilt’s curve allows for more finesse and precise moves, favoring a single-handed stance.

Asajj Ventress has been a Nightsister, a Jedi, a Sith, and a Bounty Hunter. Her blade is as unique and versatile as she is, two curved hilts that are able to connect into a unique staff – reflective of her skills under Dooku’s teaching. As well as those of Sith before her.

An ancient version of the Jedi weapon, The Darksaber was forged in Beskar by the first Mandalorian Jedi Tarre Vizla. After being reclaimed from the Jedi Order many years later by Clan Vizla, the unique conventional-sword-shaped blade became a symbol of power and unity for Mandalore.

As a youngling during the Clone Wars, Kanan Jarrus survived the Jedi Purge and went into hiding. While evading the Empire, he stored his lightsaber on his belt split into two parts to avoid recognition. Kanan’s story is not unlike Jedi: Fallen Order’s Cal Kestis, but Kanan’s remains the only saber to disassemble without separating into 2 lightsabers.

Originally red in color due to being owned by a Sith, Ahsoka Tano’s dual-wielded white lightsabers were the first white-bladed sabers to ever be shown on film or television. After purifying the kyber crystals with the force and thus changing their color, Ahsoka crafted this pair of sabers (one single blade, and one shoto) to be used and brought with her everywhere and signified her loyalty to neither the Jedi nor the Sith. They were after this time seen in television shows such as Rebels and The Mandalorian.

After leaving Luke’s Jedi temple, Kylo rebuilt his saber into the uniquely cross guarded blade we see throughout the sequels. Explained as harnessing a fractured kyber crystal, the crossguards are a result from adding vents to prevent the hilt from overheating. Mixed with added wiring and access panels cut in, the result is a kitbashed flair favoring function over style.

After losing his 2nd lightsaber, Obi-Wan Kenobi builds his iconic hilt, which we see in A New Hope. We see Obi wield this blade as Alec Guinness in ANH, and later as Ewan McGregor in The Revenge Of The Sith. It’s also the one featured with its animated counterpart in The Clone Wars. Luke used its design as a framework for his second saber in Return Of The Jedi as a tribute to his master.

RELATED: 10 Of The Weirdest Star Wars Products Ever Made

Which favorite of yours didn’t make the list, and why is it Anakin’s? Tell us on social media! May the force be with you, always.