A Quiet Place: The Internal and External Struggles of a Parent

The survival of our species can only be found through communication. 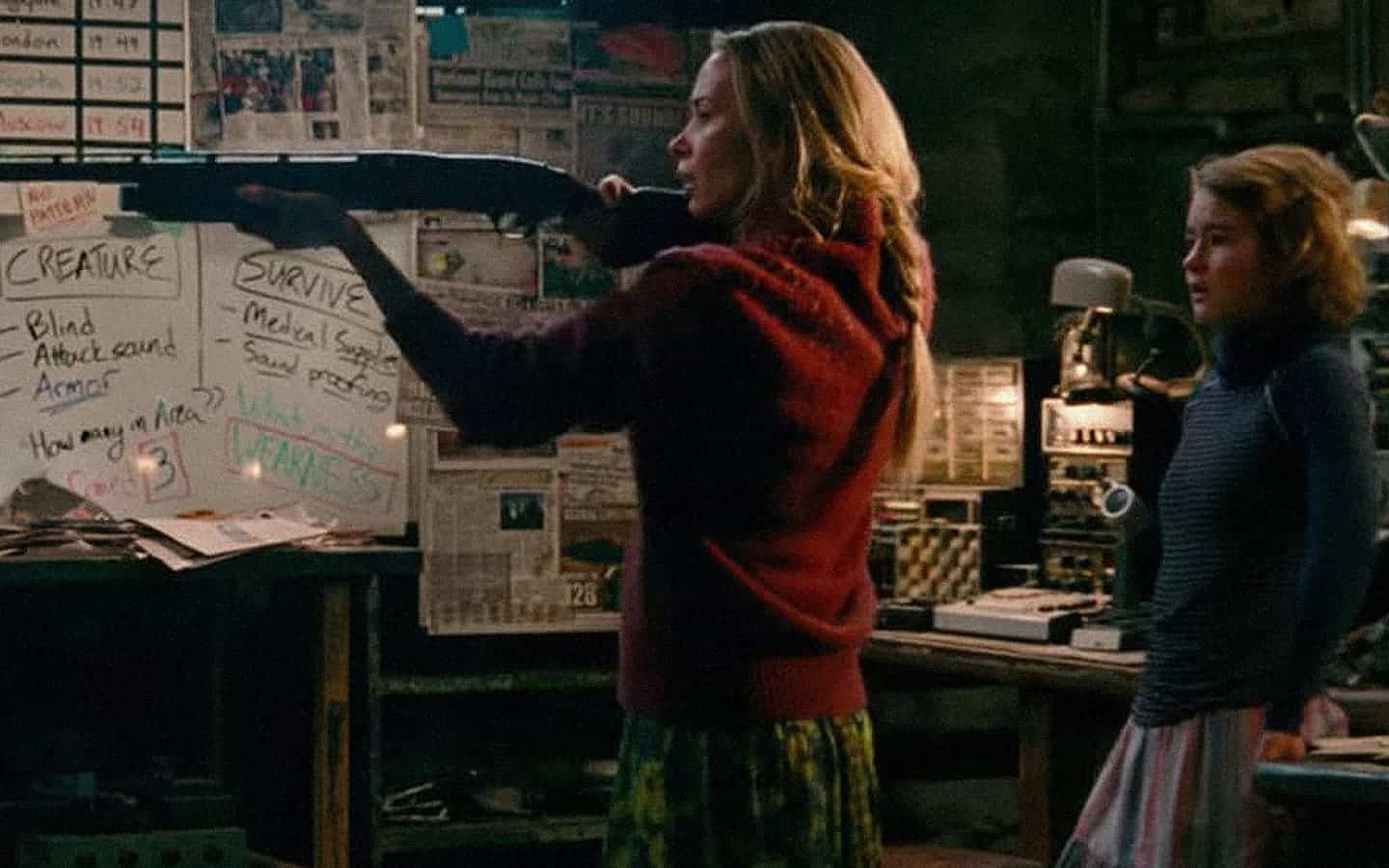 The survival of our species can only be found through communication.

Let’s imagine we’re watching a nature documentary. A beautiful landscape is in the background. A white sheet blankets a band of penguins, or a hunting pack of hyenas scavenging their way through a dry desert. Whether it’s land, sea, or air – it’s up to you.

And just as Benjamin Franklin guaranteed us two things in life, death, and taxes, there’s one guarantee in these types of documentaries. Primal instinct is what causes a cat to stay quiet when picking it up from the back of its neck. Just like how its mother would do if danger is present. Or why a baby stays quiet when holding them close to your chest: the instinct of self-preservation.

According to the dictionary, self-preservation is a natural or instinctive tendency to act so as to preserve one’s own existence. It’s inside all of us. Even Blake Snyder covers it in his screenwriting book Save The Cat. I’m paraphrasing here, but he mentions how primal instinct is something everyone can relate to such as survival, hunger, sex, fear of death, and protection of loved ones. In this case, it’s self-preservation. And what’s the way animals and humans preserve life? By creating it and continuing their species. By raising a family. By surviving as a family.

Now let’s go back to that awesome natural scenery you have in your head. These families of whatever species you thought of, they stick together. How is this possible? How have so many species stayed alive for over 1,000 years?

Through communication, which is where animals are superior to humans. Instead of body language and verbal communication like us mere humans, animals communicate through a variety of different techniques. For a quick example, a rhino’s excrement tells others if their sick or ready to mate, while an African Mole rats bangs their head against the earth like some sort of morse code.

What happens to a family who can’t fully communicate with each other? And in this case, chooses not to? Even before John Kransinki got a hold of the script, the original screenwriting duo Scott Beck and Bryan Woods said in an interview…

“we didn’t start writing it till we knew what the theme is meaning it’s about broken family communication and the fact that even if there weren’t aliens that descended upon the earth this family wouldn’t still be able to communicate after this tragedy they have been suffering of a lost family member.”

Behind the monsters and the tension, there’s a story of a struggling family. And it begins with the incredible cold opening.

How the Cold Opening Incites the Film and Its Theme

The cold opening goes as follows:

Silence. The still of a small deserted town. Sand trails depict different paths. Leaves dance between the rustle. A pair of feet dash inside a lonely local liquor store. A family is revealed rushing within it. The middle son is sick. The youngest wants to play. The father Lee, played by John Krasinski, signs to the youngest that he can’t. It’s too dangerous. But the oldest of the three siblings, Regan played by Millicent Simmonds, disobeys her father and the youngest gets the toy. Once the family leaves and further down the road the catastrophe happens.

Both parents stupidly walk in front of the line followed by the sick son, the deaf daughter, and the youngest playing with his new prize possession. A fun sound emits from the toy. Then death.

So why did I spend so much time on this intro where on the script it’s 7 pages out of 84? It’s because this cold opening does two important things.

First, it shows the world exactly what it is. Going into this movie trailer blind I had no idea what the hell it was, except that it’s a horror film starring Jim and produced by Platinum Dunes. That’s pretty much all I needed to get my butt into a chair. So you can guess just how excited I got when the monster came and snatched up the boy. Within minutes we learn there’s some sort of an apocalypse, a family who signs to each other, and a monster who attacks sound.

The second thing this cold opening does is inciting the incident for the theme as well. This will be the cause of the family’s future problems.
The miscommunication within a broken family.

After this ordeal, the film skips forwards. We focus on Regan laying down. In the screenplay, Regan is showed as pretending to be somewhere else until the readers see she’s holding the toy shuttle. The toy shuttle is in bold lettering stating its significance. She quickly hides it upon hearing someone approaching.

We get to see how the family is living off the land in this post-apocalyptic, post-traumatic scenario. Everything here has a purpose. Once the film covers the family, the last one to come into the shot is Lee played by John Kransinki. Now I’m going to read to you the description that was given in the screenplay. It reads as follows:

LEON ABBOTT (LEE), 38. LEE too has changed, though much more obviously. He has lost weight on his strong farmer frame, he wears a beard and his sunken eyes indicate that he hasn’t slept well… in a long time. The next couple off scenes reveal the farm and the way the family had been living since the accident. Carefully placed sand and alerts through lightbulbs. While Lee lights the fire to signal the surrounding neighbors he takes out a hidden box. The contents in question is a picture of his lost son.

Ok, so the writers made sure the theme is prevalent. Here’s an example in the script:

Through the mirror, the two of them looking silently at each other for a moment too long… it is heartbreaking.  REGAN pathetically gestures “eating”. As LEE nods, trying to muster a polite smile we can see very clearly… something is broken.

After this set up, it’s clear that even if these noise hunting monsters weren’t afoot, the communication between the family would still be minimal. Regan feels responsible for the death of her little brother as well as losing the love from her father.

So when I first watched this film the biggest takeaway I got from it was what I’m explaining here. The miscommunication between a family. But upon my most recent rewatch my son had already been born. There’s another thing I didn’t catch until now which still supports the current theme and that’s the struggle of parenting. The role of a parent is simple yet so complex. All we have to do is prepare our kids for the outside world. Only the world is filled with so much danger and in this case literal and figurative monsters. This was also in Krasinki’s and Blunt’s mind when they were added onto the film because their second baby was born a few weeks prior.

As we witness the struggle of Lee and Regean, no matter what has happened he still tries to help her by trying to create a working hearing aid. Only she doesn’t see it this way. All she sees is Lee taking the son, Noah, out for survival training while she stays at home with the mom, Evelyn. Keep in mind Noah is petrified to go outside while Regean is willing. But to Lee her hearing loss is too great of a risk. Again this is Lee trying to continue the self preservation of his family.

About 40 minutes into the film we get out the first piece of actual dialogue. In the script, the writers show its importance by writing in bold letters “This is the first piece of dialogue we here”. And just what is it that breaks the silence between this family: a scream of relief and joy followed by some necessary exposition. Not only does it show us how to deal with the monsters later, but we also see the kid’s perspective on their father.
If Lee blames Regean for the death of the youngest (Because she does). If he still loves her (Because she doesn’t think so).

And during this Regean is off continuing the shrine she made for her lost brother. The one she blames herself for. This leaves Evelyn’s character alone in the house which leads to the most intense sequence of the film. The scream of childbirth.

The first scream happens with the old man. A howl of pain. His dead wife lies in front of him. Gutted like a fish, motionless…the both of them. The anguish flows through the man. For a quick second millions of thoughts runs through his head. But each internal battle ends on the same path, to be alongside his wife. Not even death will do them to part. His suicidal howl lasts only a couple of seconds, but the cracking of trees and branches are instant yet they feel like an eternity for what’s to come. This scream is one for death.

The following one is a couple scenes later. Evenlyn’s water broke. She’s alone. And she can’t make a sound. Only she does with the inconvenient nail faced upwards. She crashes down creating a ruckus that could be heard miles away in a silent environment. The monsters rush towards the noise. Luckily for Evelyn, Lee has created a defense system for this specific situation: the fireworks. As they begin to go off the monsters follow the sound and Evenlyn releases a gut-wrenching scream.

A scream filled with pent-up physical pain. An external wound from a nail and the internal trauma happening within her body. A scream of birth.

Following this tense sequence is the heart of A Quiet Place. The climax that is both emotionally painful to watch, but cathartic all the same. Just like how Dani released her inner turmoils through her wails in Episode 2. Lee bellows the last scream full of love.

He sacrifices himself for the love of his children. For the love of his daughter. This breaks the silence between the two. His final words directed towards Regan. Fixing the miscommunication that has torn this family apart. This allows for self-preservation to continue peacefully through the chaotic post-apocalyptic world. Although the world is in shambles, the love of the remaining family continues strong.

Have You Watched A Quiet Place?

We hope you enjoyed our breakdown of A Quiet Place. Did you see the film? What did you think? Let us know on social media!