The Day the Earth Stood Still: A Warning From Out of Space

This Sci-Fi masterpiece’s messages have never been more relevant. 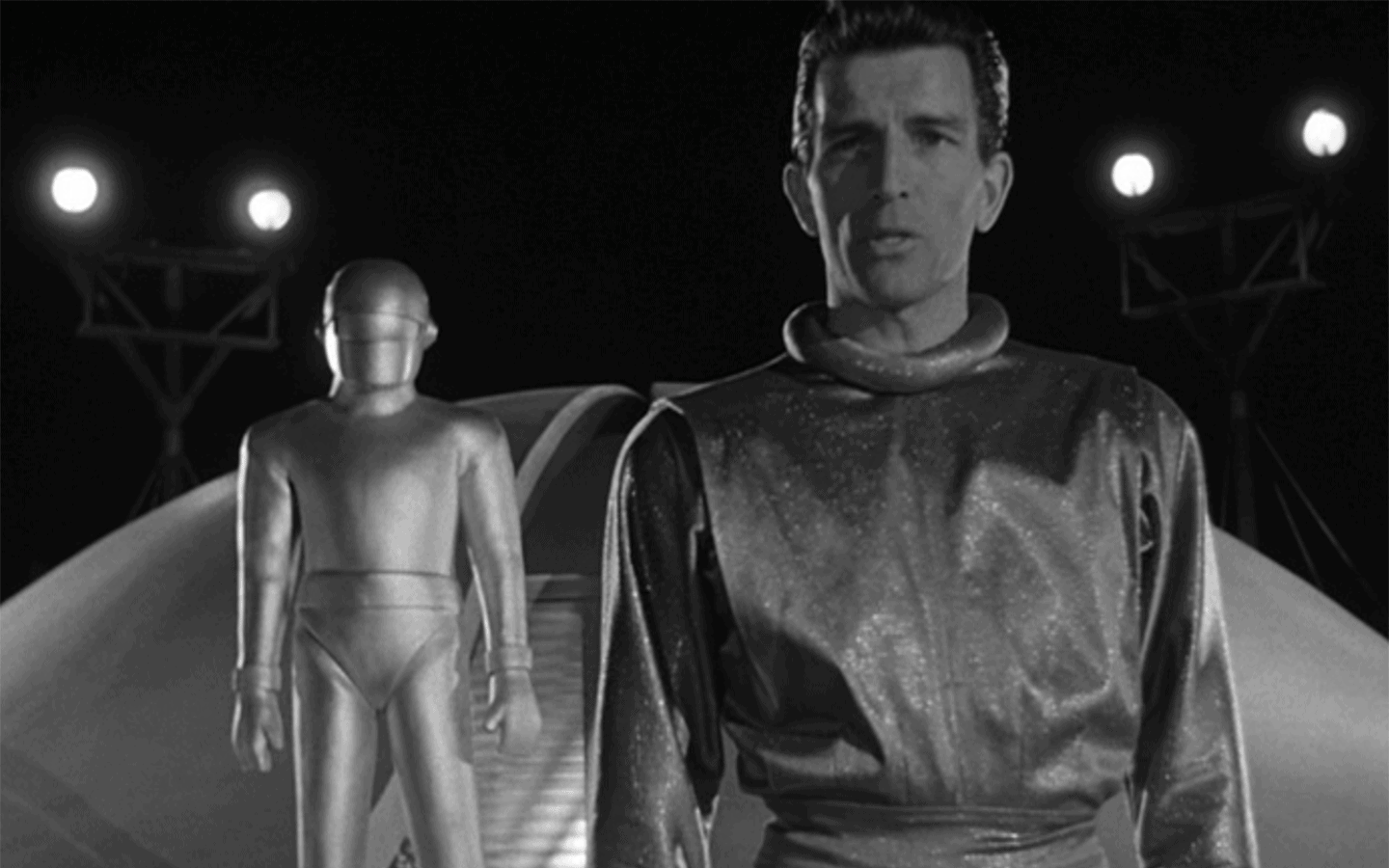 This Sci-Fi masterpiece’s messages have never been more relevant.

The Day the Earth Stood Still (1951) is more than a retro sci-fi flick (though it does feature a monstrously sized guy in a special effects suit). It was arguably the first studio tentpole film if not the first one in the Science Fiction genre. Masterfully directed by Robert Wise and written with great finesse by Edmund H. North, The Day the Earth Stood Still is based on the short story, Farewell to the Masters by science fiction author, Harry Bates. This amazing shortlist of creative individuals isn’t what makes the film so remarkable.

It’s the fact that this is one of the first cautionary science fiction films, made during a time where it was better to follow the line of nationalism and fear; rather than to speak up about matters that would trouble the conscience of any reasonable person. It even takes on biblical undertones at times. Such as when it speaks to humanity’s destructive nature, in similar fashion to when Cain is warned about his anger with his brother Able and told, “…sin is crouching at the door, and its craving is to dominate you, but will you get the mastery over it?” Sadly many of us know how that story turns out.

In a similar fashion, the film’s protagonist, Klaatu (Michael Rennie), is sent as an emissary to Earth by a collective of wiser, more advanced societies to warn humanity that their current behavior has set them on a trajectory to destroy themselves, as well as other neighboring species through their development of both atomic energy and rocketry. The warning urges that, if we don’t change our ways, this coalition will destroy humanity, rather than allow us to proliferate into space and threaten other civilizations. To further drive home the conviction of these civilizations, it’s revealed that Klaatu’s robotic companion and protector Gort (Lock Martin) is a member of an intergalactic police force trusted with the protection of these alien species as well as the power to wipe out any and all that would threaten the peace.

Why is The Day the Earth Stood Still so effective at delivering it’s messages?

It is a piece of storytelling that exists in the audio-visual medium. It features real broadcast journalists of the time appearing as themselves (much in the way that Larry King and Soledad O’Brien have done in more recent science fiction films). This aids in grounding the fantastic tale of the first contact with extraterrestrial intelligence in a manner that lets the audience become steeped in a sincere warning, based on science and extrapolation, in a compelling and captivating way. Film is the perfect medium for presenting these ideas since audio-visual stimuli are processed in the same area of the brain that processes emotion.

Cinema Touches the Proverbial “Heart” of a Viewer

The addition of science and technology just outside our grasp ratchet up the “cool factor,’ in effect sweetening what could be a bitter pill to swallow. The Day the Earth Stood Still might not be the first film to do this, but it is the first to do so in a way that demands the film be taken seriously. It isn’t just another, “spaceman movie”, but a genuine piece of critical cinema; crafted with such artistry that it is not overly preachy, but still impels the viewer to consider our actions from an external point of view. We have to ask, what would our interplanetary peers, or perhaps betters, think of our behavior?

Notwithstanding the still very real threat of atomic obliteration, we’re encouraged by the earthly experiences of Klaatu to think about our propensity for aggression. The movie also spends quite a lot of time demonstrating why humanity is so poorly prepared to join a greater interplanetary society. Emphasis is placed on the tragedy of war, humanity’s often violent response to fear, and the tendency of humankind to oppress each other for power and material gain. These things don’t make people inherently evil, but nonetheless dangerous in the minds of the extraterrestrial coalition.

We’re shown these traits make people like government leaders, the military and even average people such as Tom (Hugh Marlowe), dangerous to Klaatu, even costing him his life at one point in the story. As a normal person with little power in the world, Tom suddenly has the power to help or doom Klaatu, and thus all of humanity. When his girlfriend Helen (Patricia Neal) points this out to him, we discover Tom’s, and thus humanities, darker nature through his response to her pleas to listen to her; “I don’t care about the rest of the world.”

This moment perfectly highlights our unwillingness to acknowledge that it isn’t some rival nation or political ideal that imperils our planet and all life on it, but humanity and our stubborn refusal to work together. As the film progresses, it becomes increasingly frustrating to watch the organizations established to help people cope with and respond to new circumstances and potential threats completely mishandle first contact with Klaatu. As he describes them, the “childish jealousies and petty squabbles” of human governments could have easily cost the people of earth their lives at numerous points in the story.

Fortunately, in addition to these cautionary examples, we are presented with role models in the forms of Helen, Bobby (Billy Gray) -Helen’s elementary-school aged son- and Professor Barnhardt (Sam Jaffe), a presumed astro-physicist. While Bobby and Helen are presented as ordinary people, they help Klaatu to see that not all of humanity is bad, but do deserve to live and thrive. While Bobby shows youthful curiosity and innocence, it is Helen and Prof. Barnhardt that eventually understand that Klaatu is truly on a mission of peace and that humanity, as a people, must take Klaatu’s warnings seriously and be willing to make necessary changes. It is Helen who proves to be the true hero of this film, making small but significant changes in her thinking to aid Klaatu in trying to escape the Earth. Their willingness to cooperate and help Klaatu are not the only admirable qualities of these characters though. They are also curious, open-minded, and guileless. It is these qualities, which Klaatu realizes many humans have the potential to possess, that inspire Klaatu to keep Gort from executing interplanetary justice upon humanity immediately.

These contrasting groups of humans show that while humanity could be a terrible threat, we are also quite young. And with youth, comes hope. It is this hope for our young species that drives Klaatu to give us the chance to grow and change when he states, “Your choice is simple. Join us and live in peace or pursue your present course and face obliteration. We shall be waiting for your answer.” The film ends with Klaatu staring hopefully into a crowd of world representatives, waiting for a response to this ultimatum, then leaving the decision to humanity.

Klaatu is Speaking to Us. The Audience. Humanity!

And it is this cinematic tradition that is the most beautiful facet of science fiction, the ability to make introspection interesting, entertaining, and less painful. Have we learned the lessons Klaatu tried to help us to learn? Can we see where each group of people made choices and came to their conclusions? How would the rest of the solar system respond to our answer, and is there still time to change our ways? Will we be like Cain and slay our proverbial brother with our violent innovations?

I would hope we choose not to be like Tom, who makes self-interested, jealous, and short-sighted choices at every turn. Tom is a fool. Or like the hot headed generals that shoot first and ask questions later. Or worse yet, political leaders that know the best course of action to take, but lack the conviction to rise to the occasion and make the right choice. Rather, let us be like Bobby, who observes the world with innocent wonder; like Helen, who responds to Klaatu’s warning clear-headed and decisively; or like Dr. Barnhardt, approaching problems with curiosity, cooperation, and credulity.