Aesthetics of the Universal Phantom Films

Whether the story is set in an opera house, a rock show, or a high school auditorium, the phantom’s narrative is inherently theatrical. 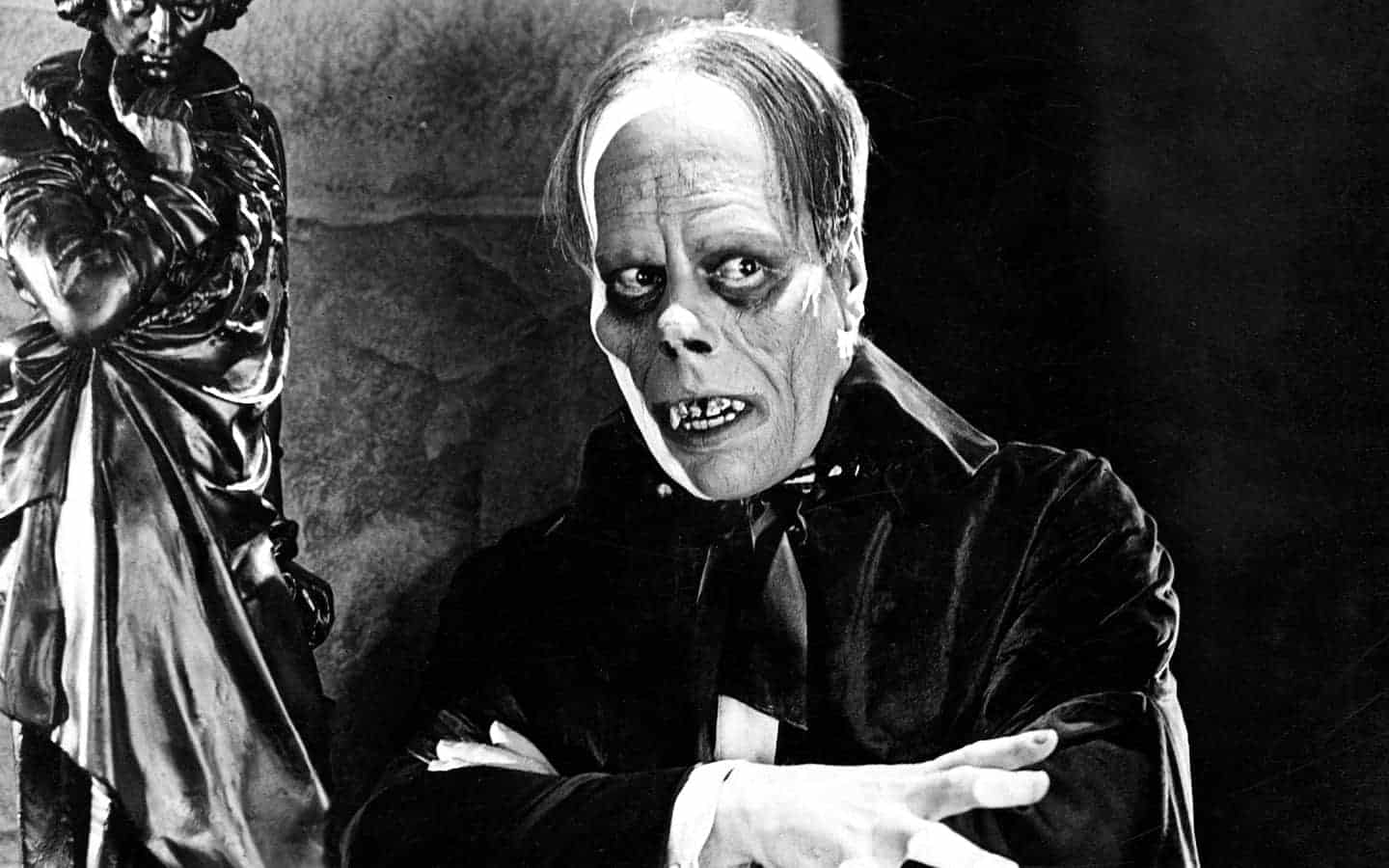 Whether the story is set in an opera house, a rock show, or a high school auditorium, the phantom’s narrative is inherently theatrical.

With its lavish sets and masked characters, adaptations of Gaston Leroux’s 1910 novel The Phantom of the Opera, or Le Fantôme de l’Opéra in its original French, all share a similar sense of the dramatic. Without fail, its titular villain is both monstrous in his lascivious and controlling desires, as well as tragic in his deep isolation. Whether the story is set in an opera house, a rock show, or a high school auditorium, the phantom’s narrative is inherently theatrical.

He is simultaneously abandoned by and forever trapped within show business. Perhaps this attachment to the theatre is what makes me love the Phantom so much. As a former theatre kid, I’m pretty much trained to drool over everything that Phantom adaptations stand for – the over-the-top characters, romantic music, elaborate set pieces, rising starlets, gaudy capes and, of course, the masquerades.

Two of the earliest filmic adaptations of Phantom were produced by Universal Studios: the 1925 silent movie starring Lon Chaney, and the 1943 technicolor film starring Claude Rains. The films tell the same basic story of a masked composer haunting the Paris Opera House through the use of different aesthetics. The two films center around the horrors that stalk the darkened corridors and underbelly of the Paris Opera House, but while the 1925 film is bleak and ominous, the 1943 Phantom is largely full of color and excess.

Rupert Julian’s silent masterpiece The Phantom of the Opera features a particularly dark and grisly adaptation of Leroux’s original novel. The film lures its audience to peer behind the glamour and richness of the Paris Opera House stage, and therefore primarily works by juxtaposing its pretty on-stage scenes with the horrifying world that exists backstage. The audience quickly learns that someone – or something – is haunting the Opera House. This haunting presence belongs to the Phantom, a psychotic and isolated former composer who immediately falls in love with Christine Daae, the understudy for diva Carlotta, once he sees her on stage.

The Phantom seduces Christine by concealing his physical appearance through a number of theatrical tricks (including a one-way mirror) and claiming to be a mysterious “master” who can help her to achieve fame and glory as an opera star. She follows him into his secret home within the tunnels below Paris, where she eventually – and dramatically – rips off his mask, revealing a grotesque face beneath. The rest of the film plays as a fairly basic cat-and-mouse narrative, with the Phantom constantly pursuing Christine, who seeks the help of her gallant lover the Vicomte Raoul de Chagny, and the Paris police.

The 1925 film almost obsessively reenacts the discovery of something threatening lurking beneath an otherwise pristine or neutral surface. This fixation is accomplished primarily through the visual aesthetic of the film, rather than just the actual content of the Phantom story. At the film’s beginning, the audience is told through a title card that the Paris Opera House is built upon “medieval torture chambers” and “hidden dungeons, long forgotten.”

Uh oh. Are your horror-fan-senses tingling?

Following the confession of this gothic foundation, the audience is shown a number of dizzyingly beautiful shots of the exterior and interior of the Opera House, as well as of a ballet performance occurring on the stage. This is almost immediately juxtaposed with a scene backstage as the shadows of the ballet dancers previously seen onstage, scurry through the wings before they are visually frightened by something off camera. The camera switches from their shadows to the bodies of the ballet dancers themselves, just as they are confronted with and terrorized by a mysterious shadow suddenly appearing within the mouth of a monstrous set piece, causing both the real world and the fictitious one produced by the opera stage to become bewilderingly mixed.

The backstage is nowhere near as heavenly as the Opera House stage and exterior would suggest, however, it’s not until the end of the film that the Opera House’s gothic origins fully reemerge. The Phantom himself behaves as an agent of vengeance, both for himself as he tries to wreak havoc on Paris for not getting his way and for feeling abandoned by society, as well as for the dark history of Paris that seems to lie forgotten. During the movie’s conclusion, the Phantom opens the medieval torture chamber for business once more, trapping Raoul and Inspector Ledoux inside a terrifying room of mirrors that threatens to bake them to death.

Along with physically torturing the two men, the Phantom enacts psychological torture against Christine Daae, who he forces to “choose” between two horrible options: either she marries the Phantom and Raoul will be freed, or, if she refuses to marry the Phantom, then the entire opera will explode, killing everyone instantly. In an effort to make this torturous decision even more theatrically gothic, the Phantom instructs Christine to turn one of two enlarged insects to solidify her choice: turning the grasshopper will blow everything up, while turning the scorpion signifies that she accepts the Phantom’s marriage proposal. I guess you could say that the 1925 Phantom is your grandparents’ torture porn film.

Perhaps the most famous moment, however, of discovering something sinister lurking beneath a carefully contrived surface is realized in the moment when Christine removes the Phantom’s mask. This scene is paced expertly: Christine carefully reaches out to remove the mask as the Phantom unknowingly continues to churn out tunes on his organ. It’s one of those moments common to horror cinema- the hero or heroine takes advantage of a moment of distraction to take off the killer’s mask rather than escape. Come on, Christine, you’re better than this! Run!

The 1925 Phantom, however, performs this moment with an eerie twist: rather than immediately return the mask to his face, the Phantom moves closer to Christine, forcing her to get a better look at his horrifying visage. The camera momentarily takes on Christine’s perspective, causing the audience to watch as the Phantom’s face goes from blurry and somewhat distant to all-too close-up. We are made complicit in Christine’s deadly curiosity, and the Phantom points at the camera as he moves ever closer, accusing us of our voyeurism.

Famously, Lon Chaney designed his own make-up for his performance as the Phantom. He may have done too good a job, as the methods and tools he used to transform his face into one resembling a skull actually caused him some pain. According to the film’s IMDB page, Chaney used egg membrane to make his eyes cloudy, attached fish skin to his nostrils with spirit gum to tilt his nose upwards, pumped up his cheeks with cotton and collodion, glued back his ears, and used a “wire-and-rubber device” in certain shots which sometimes cut into his nose, causing him to bleed. I sincerely hope that Lon Chaney was paid well for his work in this movie because I don’t know how much money I would need to be given in order to stick egg membrane into my eyeballs.

Overall, we might define the aesthetics of Rupert Julian’s The Phantom of the Opera as grisly, dark, and exceptionally gothic. It’s a surprisingly modern film, both in its fearless display of horrific images and situations, as well as in its fascination with the voyeuristic impulse to see behind the curtain and beneath the mask.

Lubin’s technicolor Phantom of the Opera (1943) offers quite a departure from Julian’s 1925 film. In this retelling of the story, a pit violinist named Erique Claudin (played by the great Claude Rains) falls obsessively in love with the operatic soprano Christine Dubois and helps her in her career from afar. Unfortunately for Claudin, he is eventually fired after spending twenty years working for the Paris Opera House, later murders a music publisher, and gets his face burned with acid.  A number of crimes and mysterious appearances of a Phantom soon begin to plague the Paris Opera House, and Christine’s two lovers, opera singer Anatole and police officer Raoul, must work together in order to solve the mystery once the Phantom’s fixation on Christine becomes apparent. The film concludes when Claudin is unmasked as the phantom and buried alive in his secret lair, and Christine refuses to choose between her two lovers, instead enjoying her newfound fame.

Just by glancing at this Phantom’s use of technicolor, it’s easy to see that this film operates within a very different aesthetic from one featured in the 1925 Phantom. Everything is full of color and light, even when the Phantom appears to kidnap Christine or terrorize the people of the Opera House. As a result, despite the fact that this Phantom also works to reveal the darkness beneath the opulence, it winds up becoming more invested in the romantic and lavish world aboveground than it does with the anger and vengeance planned by Claudin in the labyrinthine corridors below.

Of course, it’s hard to argue against Lubin’s interest in showcasing the opulent Opera House and all of its dazzling costumes. It’s objectively gorgeous. In fact, the film won two Academy Awards in connection with its beautiful look, one for Art Direction and the other for Cinematography. The auditorium and stage of the Paris Opera House used for the film was the same set used for the 1925 Phantom and was supposedly haunted. Unfortunately, Stage 28, once the oldest remaining film set in the world, was demolished in 2014 in order to expand Universal Studios Amusement Park.

Despite the overwhelming glamour of the 1943 Phantom, the Phantom remains a figure of obsession and revenge. A passionate composer and musician, when he is fired by the Paris Opera House after a twenty year career, Claudin is understandably upset. The only thing his employers offer him in compensation is a season ticket. Throughout the film, the audience is repeatedly reminded of the ways in which performers are expendable. Christine is warned against focusing too much on her career as opposed to marriage due to the fact that her looks and talent will eventually fade, making her unemployable.

Through these moments, the audience begins to see behind the curtain and into the darkness of show business; however, the movie never strays so far into the darkness as the 1925 Phantom ventures. By the end of the film, Christine is able to happily enjoy her career and the two men, rather than grow angry at her for not choosing or jealous of each other, become good friends. As a result, the 1943 Phantom often feels like it may be better categorized as a romance or even a comedy than a horror film. Still, there are moments that echo the dismal horrors of the 1925 Phantom, such as the continuous presence of shadows and the pretty brutal Phantom make-up worn by Claude Rains.

With its chase scenes moving amongst curtain rigging, poisoned chalices, and robin’s egg blue phantom masks, the 1943 Phantom fully embraces its theatrical focus. Everything is done in excess – and it’s mostly a lot of fun to watch.