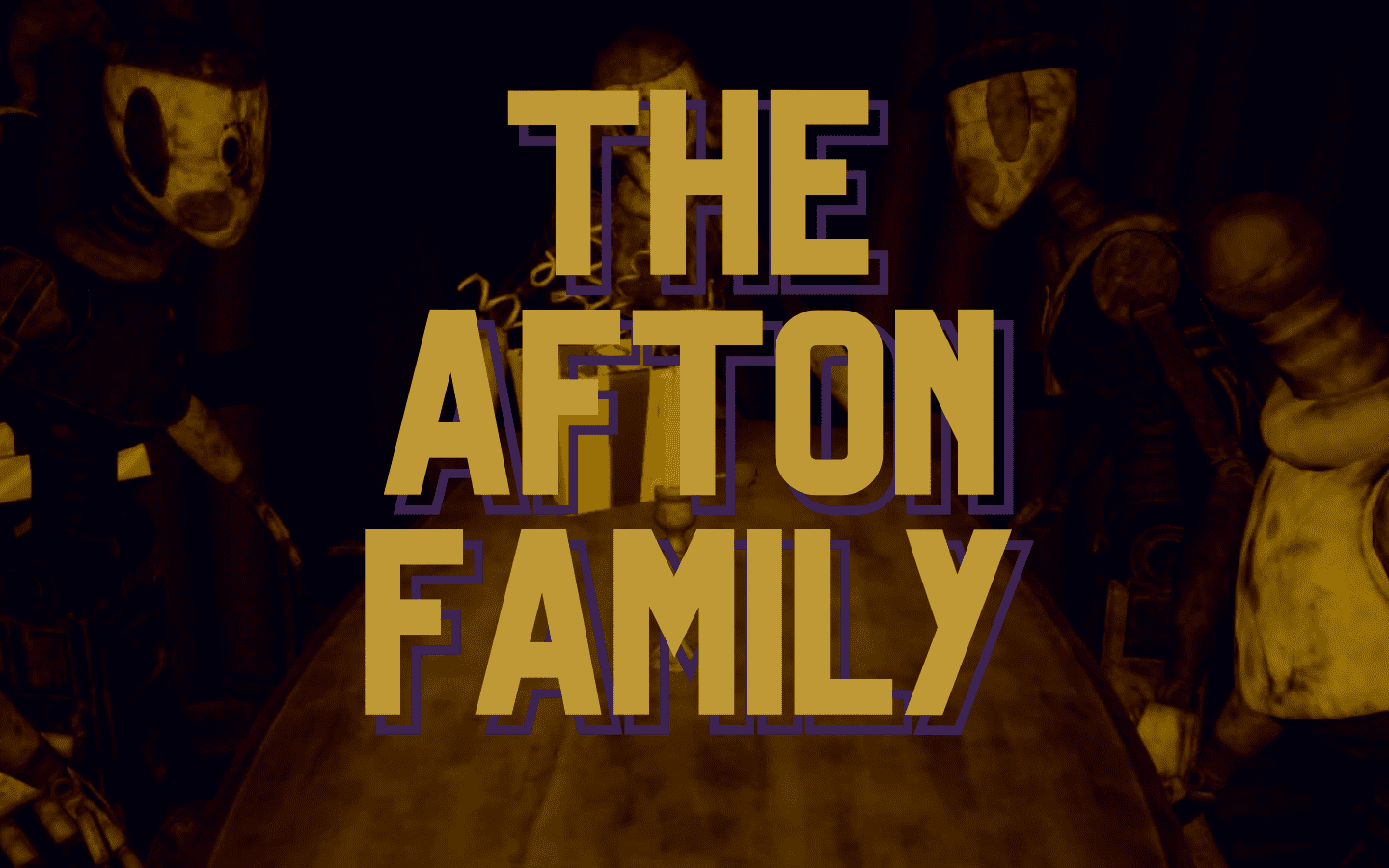 Who Is The Afton Family In Five Nights At Freddy’s?

Today, I want to go over the lore of the Afton family members, and how each of them fit into the overall Five Nights At Freddy’s story.

William Afton is the main antagonist of the Five Nights At Freddy’s series. He is responsible for the creation of many animatronics meant to capture children. At first, William Afton was thought to be your run-of-the-mill serial killer. However, as the stories in the games progressed, it seems that William Afton may be searching for the key to immortality.

As many FNAF fans will tell you, William’s children have died due to his creations. This adds a layer of depth to this evil character. He may be on this rampage in an effort to find out how to bring his children back. To me, William Afton always felt more like an immoral mad scientist than a straight-up killer.

William takes on many forms through the Five Nights At Freddy’s games. As a normal human, he is known by the community as ‘Purple Guy’. This is due to his purple appearance in the older games’ 8-bit minigames.

After being confronted by the souls of his victims, William’s body is crushed inside his iconic Spring Bonnie spring lock suit. His soul then begins possessing the suit. This iteration of William Afton is known as Springtrap.

As Springtrap, William spends years trapped in the secret back room of one of the pizzerias. This changes when employees from the horror attraction ‘Fazbear Frights’ uncover his body. Springtrap is now free to roam and create terror once again.

After Fazbear Frights mysteriously burns down, Springtrap roams around until the opening of the Freddy Fazbear’s Pizzeria Simulator location. During this time, William’s suit has deteriorated and he is forced to repair himself. This version of William Afton is known as Scraptrap.

After the Freddy Fazbear’s Pizzeria Simulator location burns down, Springtrap as we know him is no more. However, his life essence comes back as a computer glitch when a newly formed Fazbear Entertainment scans old circuit boards into their new computers. This version of William Afton is known as Glitchtrap.

Glitchtrap finds a way to mind-meld with innocent people. Vanny, the antagonist of Five Nights At Freddy’s Security Breach, is under Afton’s control. She then rebuilds him in the underground lair of the Pizza Plex. This version of William Afton is known as Burntrap.

To be honest, not a lot is known about Mrs. Afton. That said, these kids had to come from somewhere.

However, there are a few clues to Mrs. Afton’s identity in the games. Many people believe that the ballerina animatronic Ballora contains the soul of Mrs. Afton.

Ballora sings a song, which many people believe represents Mrs. Afton’s sorrow for losing her children:

Why do you hide inside your walls
When there is music in my halls
All I see is an empty room
No more joy, an empty tomb
It’s so good to sing all day
To dance, to spin, to fly away

In FNAF Security Breach, there is a table set up for a family dinner. Sitting at the table are staff robots that are dressed up to resemble the Afton family. The robot representing Mrs. Afton bears resemblance to Ballora.

Elizabeth Afton is the daughter of the Afton family. She is murdered by the Circus Baby animatronic. Circus Baby was programmed by William Afton to count the number of children in the room. If there is only one child, an arm comes out of Baby’s torso and pulls the child into her body.

Elizabeth, obsessed with Circus Baby, wanted to play with her. Being the only child in the room, Circus Baby brings Elizabeth to her demise. Elizabeth then begins possessing the Baby animatronic.

During the events of Sister Location, Michael Afton heads to William’s underground bunker in search of Elizabeth. He finds her. Well, he finds Baby.

Baby, as well as the other Funtime Animatronics, are looking to escape the bunker. They come together to form a new animatronic called Ennard. The animatronics trick Michael into going into the Scooping Room. Michael’s insides are then scooped out, and Ennard escapes using Michael’s corpse as a skin suit.

When Michael’s body begins to deteriorate, Ennard leaves his body. Around this time, Baby is kicked out of the Ennard amalgamation and once again becomes her own animatronic.

Much like Scraptrap, Baby must rebuild herself. During the events of Pizzeria Simulator, Elizabeth is known as Scrap Baby. While Elizabeth’s soul is seemingly released at the end of PIzzeria Simulator, some fans speculate that she has a role to play in Security Breach.

RELATED: The Lore Of Baby From Five Nights At Freddy’s Explained

Michael Afton is the older brother in the Afton family. When we first meet him, he is a bully to his younger brother, Evan. Michael uses a Foxy mask to scare his brother, who is already afraid of the animatronics.

This bullying comes to a head when Michael and his friends jokingly put Evan into the mouth of Golden Freddy. Evan’s tears cause Golden Freddy’s spring locks to malfunction, and the animatronic crushes his head.

After the death of his brother, Michael Afton begins to learn more about his father’s dark deeds. As he puts the pieces together, he begins to travel to the different Freddy’s locations.

As stated previously, one of these locations is William Afton’s underground bunker. It is there where he gets his insides scooped out and replaced with Ennard.

After Ennard decides to leave Michael Afton’s body, Michael reanimates. He now roams the Earth as an undead human.

Michael then takes a job at the Pizzeria Simulator location, where he must fend off his father and sister. As many of us know, the Pizzeria Simulator was actually a trap set up by William’s business partner, Henry. Henry sets the location ablaze and everyone burns to death in the process…at least that is what we know so far.

RELATED: The Lore Of Vanny From Five Nights At Freddy’s Explained

Evan Afton, also referred to as The Crying Child, is the younger son in the Afton Family. He is scared of the animatronics. This may be due to his sister’s death at the hands of Baby. He also may have stumbled upon some of his father’s dark doings.

Evan is bullied by his brother, Michael. He eventually dies when Michael stuffs him into Golden Freddy’s mouth. While there is much speculation around Evan’s role in the series, the current consensus is that Evan shares possession of Golden Freddy with the vengeful spirit known as Cassidy. There are also some theorists that believe Gregory in Security Breach is a reincarnated version of The Crying Child.

Who Is Your Favorite Afton Family Member?

We hope you enjoyed our breakdown of the Afton family in Five Nights At Freddy’s. Who is your favorite character? Let us know on social media!