Tonia Ransom has been lending her voice and giving a whole new platform to black authors of short horror stories. 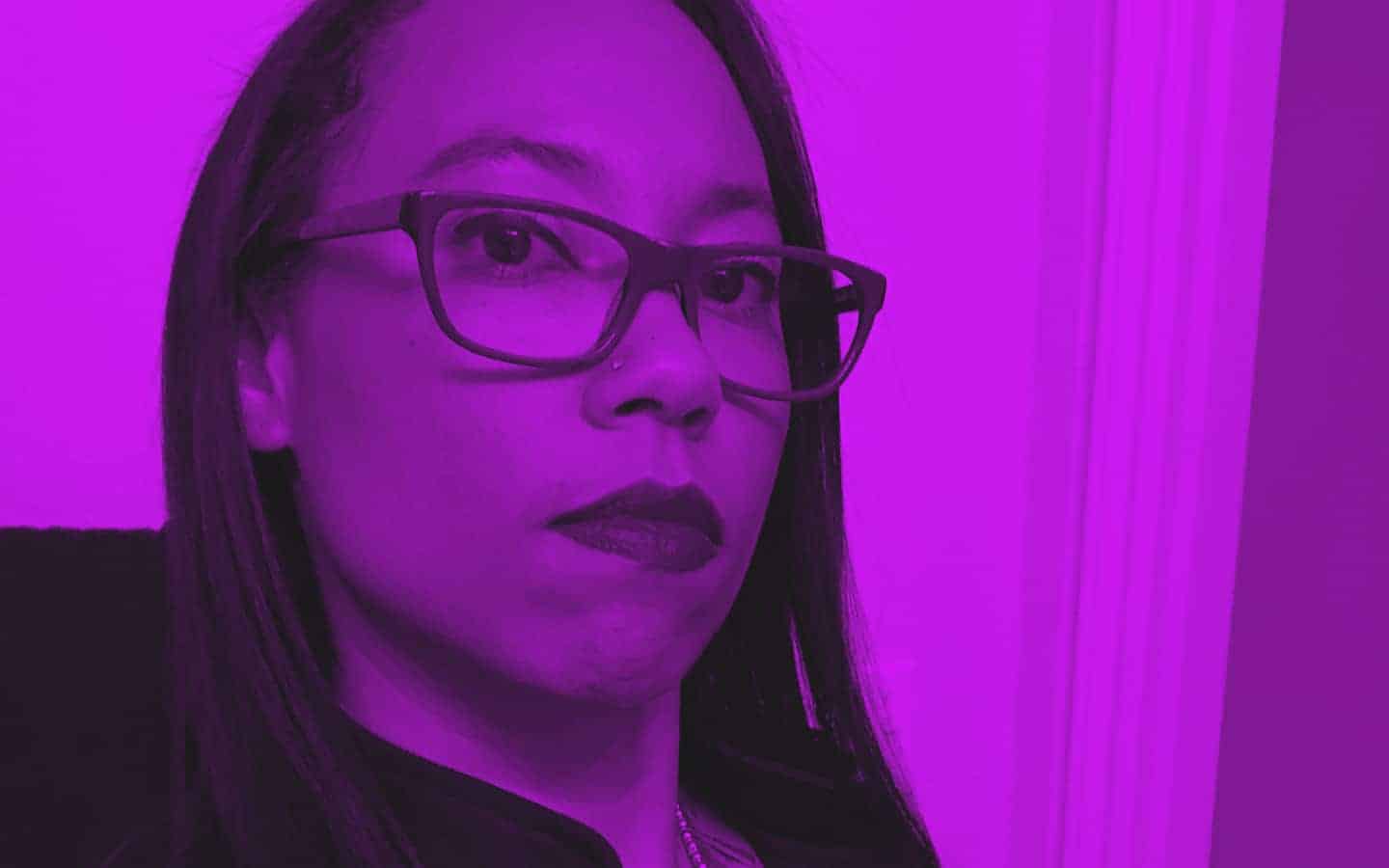 Tonia Ransom has been lending her voice and giving a whole new platform to black authors of short horror with her podcast, Nightlight; paying the authors for their work and turning them into audio productions to pulse through the ears of horror fans. In addition, Tonia is also an author herself, writing stories for her patrons on Patreon as well as her followers on Twitter and more.

An Interview With Tonia Ransom

What initially got you into horror and how old were you when you first became interested?

Tonia Ransom (TR): I’m the middle of 6 children and all of my older siblings are brothers who loved horror. Younger siblings always look up to the older ones and I was no exception. I watched horror movies with my dad and brothers from a young age—probably 8 or 9. I wrote my first horror story, Michael Myers fan fic complete with bloody knives and dead bodies, in 2nd grade. When my teacher scheduled a meeting with my mom, I thought it was because she was proud of my work…I was wrong. Ha! But I’ve been hooked ever since.

Can you tell us more about the Michael Myers story you wrote? That sounds super interesting for something a child in second grade would be writing!

TR: I sadly don’t remember much of it. I do remember that there were lots of knives and blood and dead bodies, and in the end, Michael triumphs. I was writing dark endings even then!

It’s been said that you really enjoy stories with a twist. Without spoiling the twists, do you have any favorite book/ movie/ TV Show episode twists that have inspired you?

TR: The Twilight Zone (my favorite show of all time) is full of episodes with twists. My favorite twist is the one from the episode called The Invaders where aliens land and terrorize a woman living alone. I once showed it to my class of 7th graders and the looks on their faces when the twist was revealed was priceless! When I write a story, it’s always my goal to throw readers/listeners for a loop just like that episode threw me for a loop.

What in your mind are some things that bridge the gap between a good horror story and a great one?

TR: For me, a great horror story keeps you asking questions beginning to end. How did a character die? Will they survive? Who is the killer? Is the ghost real? What dark entity is terrorizing this small town? The longer the story, the more questions it should raise. The more compelling the question, the better the story.

Are there any tropes or themes that you would love to see more of in short stories and novels?

TR: I would love to see more haunted house stories. I’m a sucker for a good ghost story, especially if the ghosts in question are children.

Horror is a genre that can definitely vary from person to person in that different things scare different people. Are there any things in particular that give you the creeps when reading a story?

TR: Very few stories creep me out or make me reluctant to turn off the lights at night, but ghost stories are the most likely tales to make me question what that strange noise was.

You’ve said before that you would love to see someone step forward and dethrone Stephen King, to rise to the same level of popularity; do you have a particular author or authors in mind?

TR: Tananarive Due! She’s been writing great horror for so long, and teaching the next generation of horror writers through her UCLA film classes. She’s an amazing writer and a wonderful person and she deserves all the success! Her novel The Good House is my favorite, but her collection of short stories, Ghost Summer: Stories, is full of great material for a TV or film adaptation.

When you write, do you find that a lot of your ideas and such stem from your real life experiences? Even if very loosely?

TR: Absolutely. Sometimes I don’t realize what experience the story stems from, but eventually it always becomes obvious that my stories are my subconscious way for working through things. A few years after my dad died, I started a novel. About halfway into it, I realized that I was basically writing the story of my dad’s death—the fears I had about what he must have felt and experienced. Once I realized what it was, I had to put it in a metaphorical drawer for a few years because it was just too painful to continue. I’ve since pulled it back out to toy with every now and then. I may even finish it one of these days.

As a writer yourself, do you ever find yourself reading a story and fantasizing about what different directions you might have taken it had you wrote it yourself?

TR: Yes…even more so now that I’m an editor as well. Sometimes I even forget the stories I read, then come up with a brilliant idea, only to remember that my brilliant idea is basically a story I’ve already read with one small difference. One of the most popular stories on my podcast, NIGHTLIGHT, is actually a re-imagining of an episode from the old time radio show, Suspense. In the original “Sorry, Wrong Number“, a woman overhears a couple of men plotting a murder on a party line (for the young folks out there, people once shared telephone lines rather than having their own dedicated line. These were called “party lines”). In my story, also titled “Sorry, Wrong Number”, a woman texts an immortal who stalks women. Both stories have a twist. I actually wrote the story as an assignment for a creative writing class where I had to tell a story only using dialogue, but instead of spoken word, I wrote it in the form of text messages. It was a fun exercise and a great way to think about re-imagining stories we know and love.

How do you go about finding authors and stories for the podcast?

TR: Most of the authors I find are either from the conventions I attend, or from reading anthologies and asking the authors if I can buy their stories for audio production. I speak at a lot of conferences, so a lot of authors find me that way, but I also seek authors out. If I see a Black writer at a convention, I always approach them and ask them to submit a story to me. I also follow small publishers that tend to publish work by Black writers. We’ve produced a lot of work originally published by Mocha Memoirs Press, for example. At this point, I’ve built a pretty strong network, so I can usually find more authors by checking Facebook to see if there are writers that I share a number of mutual friends with.

Do you ever find stories that you enjoy, but wouldn’t translate well to the audio format you have on the podcast? If so, do you feel they have to be written in a certain way to translate well?

TR: Usually, stories translate well with minor changes. Things like plays on written words have to be changed, for instance. Generally, the only reason a story wouldn’t translate well is because the pacing is slow. In audio, listeners can’t skim the way readers can, so parts that get description-heavy are much more noticeable. But I think all good stories have to have good pacing…it’s just that stories that aren’t paced well are a bit more obvious over audio.

I saw that you just announced that you will be beginning to do live shows every Friday. Can you tell us a little bit more about that and how that came to be?

TR: I’m still in the experimentation phase of the live show, but I’ve had this idea of starting a second podcast called “The Curious & Macabre” that’s just about random creepy topics, so I’m using the live show as a jumping point for that. I hadn’t really considered doing video live shows, but David Ginsburg, the creator of Tales From the Fandom podcast, invited me to be a guest on his live show. I’d appeared on his podcast  in October 2019, so we’d worked together before and when he asked, I jumped at the opportunity to join him on the live show. Get Vokl, the network he works with for his live show, was looking for more content creators and David suggested me. I met with them and it sounded like a great opportunity, so the live show was born! I’m really excited about it, both because I’ll get to talk about creepy things, but also because it’ll give me an opportunity to connect more directly with my fans. I also plan to start doing live shows specifically for my patrons, who I call the NIGHTLIGHT Legion, where they can ask me anything they want.

You can find and support Tonia on Twitter and Patreon. You can catch Nightlight pod here.