Modeling Our Imaginations with the Aurora Classic Monster Models

The Aurora Classic Monster Models gave young horror fans the chance to play around in the spooky worlds that lured them in and ignited their imaginations in ways they had never dreamed. 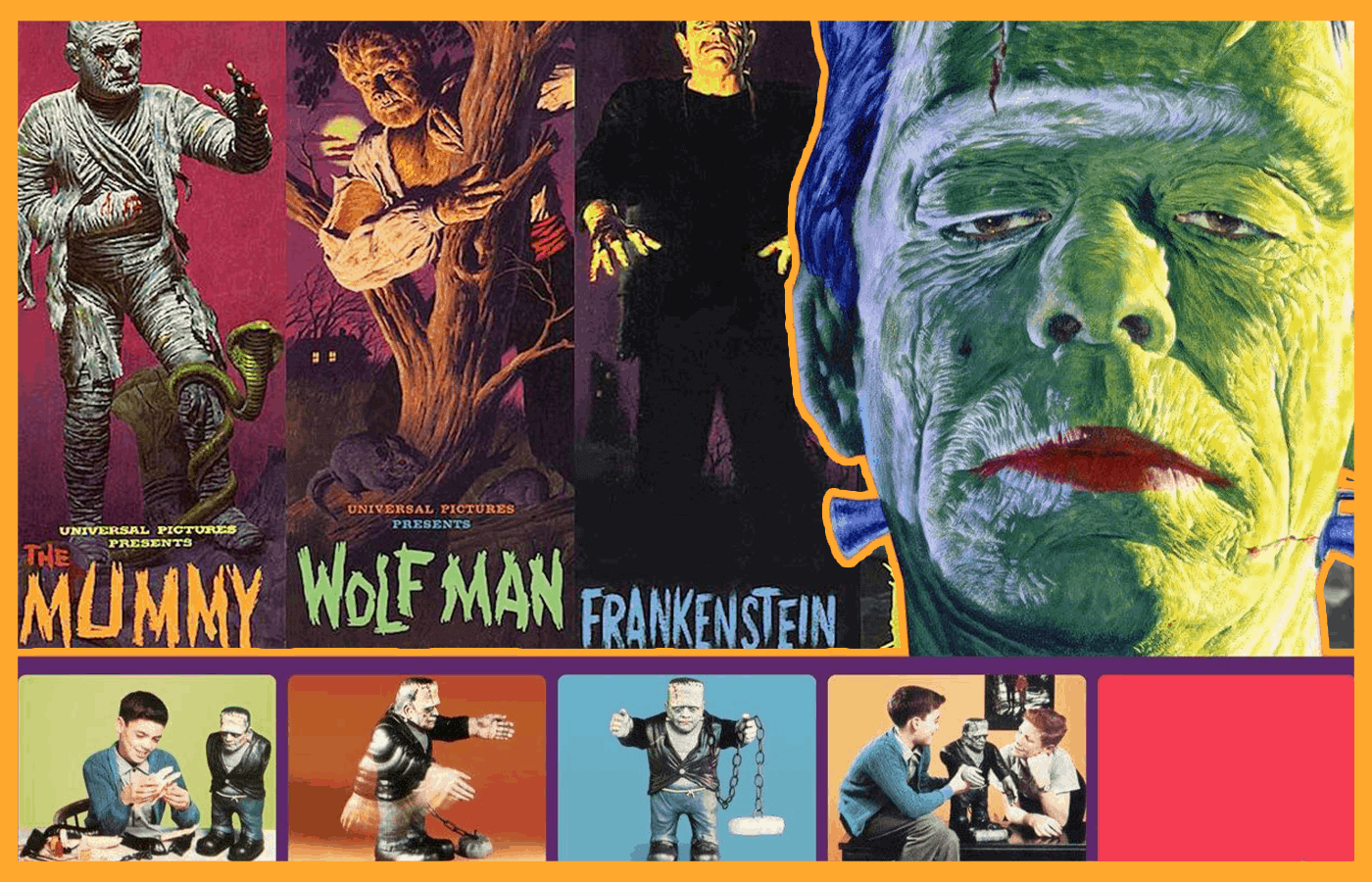 The Aurora Classic Monster Models gave young horror fans the chance to play around in the spooky worlds that lured them in and ignited their imaginations in ways they had never dreamed.

During the late-50s and early-60s, television was coming into its own as a driving force in American culture and entertainment. This period also gave birth to the Monster Kids, the horror fans at the center of the first big horror fandom boom with the 1957 release of the Shock Theater movie package. This syndicated stack of films saw the enduring Universal Monster films like Dracula, Frankenstein, and The Wolf Man hit the airwaves across the country for the first time ever alongside horror hosts who would soon become legends, like Vampira in LA and Zacherley in NYC.

Believe it or not, the original intent of these shows was to simply fill airtime with cheap syndication programming. Not a single station believed a significant amount of people would be willing to spend their weekend evenings watching monster movies. They did not count on the Monster Kids.

The Monster Kids were the first horror fans as we know them today. They were also kids who did not quite fit in with the rest of their peers; who were interested in more “traditional” fun like sports. These were kids who had been ignored by pop culture for so long that they were desperate for something to come along that they could call their own—something that spoke to their detachment—and monsters, the ultimate outcasts, certainly appealed to this desire. That outsider recognition is something horror fans will always be able to relate to, but it was particularly special for the kids then because it was so new and it happened more or less by accident.

Monster Kids continued to swiftly grow in numbers, and their thirst for horror would not be contained simply by watching Chiller Theatre or Creature Features on Saturday night. No, Monster Kids needed monsters 24/7, and that’s what they got. The merchandise that catered to Monster Kids was legion. If you had any hobby or interest, monsters invaded it and lit up the imagination of kids like nothing else could. This was when you started seeing publications like Famous Monsters of Filmland, the horror line of EC Comics, and horror toys from every major company on the market.

There were no products as popular during the Monster Kid boom of the 60s, though, as the Aurora Classic Monster Models.

Aurora had been producing model kits since the early 50s, when model building was arguably at the height of its popularity. Yet, they would see their sales dwindle at the advent of the Sixties—likely because their primary line of models featured cowboys, soldiers, and historical figures, which had become lame, quite frankly, and no longer fit in the burgeoning counterculture of Sixties America.

Horror was something of a counterculture for kids in its own way, though, and market research showed monster models would sell. Aurora marketing director Bill Silverstein was all for it, but had an uphill battle with the rest of the company’s suits, who were afraid that monster models would be psychologically damaging to kids (I hope you all can picture my eyes roll as I type that).

However, after Aurora had a group of child psychologists assure them that no damage could be done to a ten year old who builds a King Kong model (whoops, there goes that eye roll again), Aurora produced a single model of Frankenstein’s Monster for release in late 1961-early 1962 (the timeline is not clear) to test the waters. What Aurora believed was a financial and publicity risk turned into an overnight success.

The Frankenstein kit sold as quickly as stores could stock them, which never proved to be enough. Retailers and distributors told Aurora, “WE NEED MORE MONSTERS.”

The demand forced Aurora to operate its factory 24 hours a day and rush into production a full line of classic monsters like Dracula and the Wolf Man for Christmas 1962. The Mummy, Creature from the Black Lagoon, and the Phantom of the Opera would follow the year after, all adorned with cover art painted by iconic artist, James Bama, whose art would continue to grace all the Aurora Classic Monster Models, becoming synonymous with the line.

The two initial runs of the Aurora Classic Monster Models were widely successful, but this success paled in comparison to that of the 1964 lineup of three of the most popular kits Aurora ever produced: King Kong, Godzilla, and the Gigantic Frankenstein.

Monster Kids were overjoyed to be able to build King Kong and Godzilla. While the Universal Monsters on TV gave birth to their fandom, these two screen giants reigned supreme on the airwaves and would continue to do so for many years. Just as kaiju fans today do everything they can to bring their giant favorites down to size and into their collections, the same was true for the Monster Kids back then.

Not to be outdone by the giants, Aurora produced another Frankenstein’s Monster kit, only this time one that stood at nearly two feet tall. This massive model was easily Aurora’s most popular kit because there was never anything like it before, and that remains true today in the realm of vintage collectors, many of whom would give a kidney to have the behemoth Boris Karloff on their shelf.

The Gigantic Frankenstein sported an impressive deformed sculpt that accentuated the Monster’s already ghoulish features. Its rudimentary articulation allowed for far more actual hands-on playtime than the other models offered, and its monstrous size meant the Gigantic Frankenstein could stand in the corner of your room at night, haunting you while you slept or keeping you safe from even worse horrors.

Aurora’s monstrous success seemed like an anomaly at the time to many, but it certainly isn’t very surprising when you consider the perfect storm that had brewed in the model company’s favor. It goes back to the counterculture that was (and continues to be) horror.

The Monster Kids revelled in the opportunity to take ownership of something like model building, typically reserved for the “normal” kids who built plains and trains, and bring to life their own imagination. The Aurora Classic Monster Models were so immediately popular because they were special in this way, creating an experience in collecting and personal engagement that was really brand new in any fandom.

Aurora’s monsters gave young horror fans the chance to play around in the spooky worlds that lured them in and ignited their imaginations in ways they had never dreamed. Toys are wonderful but the Aurora Monster Models took time and, especially, dedication—the kind of dedication that you’ve always been able to find in the very passionate horror community. For the Monster Kids of the 60s, Aurora models were an avenue to play and create art in the weird worlds that were made only for them.

Aurora wouldn’t be able to hang onto the success of the mid-60s, though. They would make several production and marketing mistakes after 1964 that would prove disastrous, including a sticker calling their kits “Rated X…For Excitement” that inspired protests from outraged moral groups.

The writing was on the wall even after further attempts were made to revive the brand as the 70s began. Mismanagement, an oversaturated market, and increasingly dwindling customer numbers as Monster Kids left the fandom as quickly as they entered it a decade earlier to focus on teenage troubles forced Aurora to close its doors in 1977.

Despite the company’s quick decline, the legacy of the Aurora Classic Monster Models remains intact and continues to endure today. There is still something magnetic about the history of Aurora—a charm that inspires the imagination of modern day Monster Kids just as much as those back in the day.

It was like that for me when I saw my first Aurora model—naturally, it was their Godzilla. I was in a hobby shop, locked eyes with it, got my father to buy the behemoth, and built it with him that very night.

I was really impressed with myself. Sure, the pieces were all premade, and the sculpt could only ever look one way (barring any disasters, of course) but I had helped create this figure. I had helped create a Godzilla all my own to sit amongst my Bandai and Trendmaster toys. I still think about that experience today, and always consider a serious move into modelmaking when I do, just to try and capture that sense of fandom fulfillment again. I am not alone in this desire, as the Aurora Classic Monster Models truly have a fandom of their own, reigning supreme in the realm of collectors.

If you search on eBay, for example, you’re not going to find any of Aurora’s cowboys or soldiers. You’re going to find the monsters. And you’re going to see just how insanely valuable modern Monster Kids hold them to be. They’re holy grails. Even an old issue of a DC Comic or Famous Monsters with a simple advertisement for the monster models fetches a pretty penny!

Then there are the contemporary model companies that re-issue the classic kits every couple of years for a new batch of horror fans. Re-issues of the Godzilla kit also appear whenever the kaiju fandom has another one of its own booms. It’s because us Monster Kids will forever want to capture a piece of the magic that kids felt when it was a brand new world of monsters and monster models.