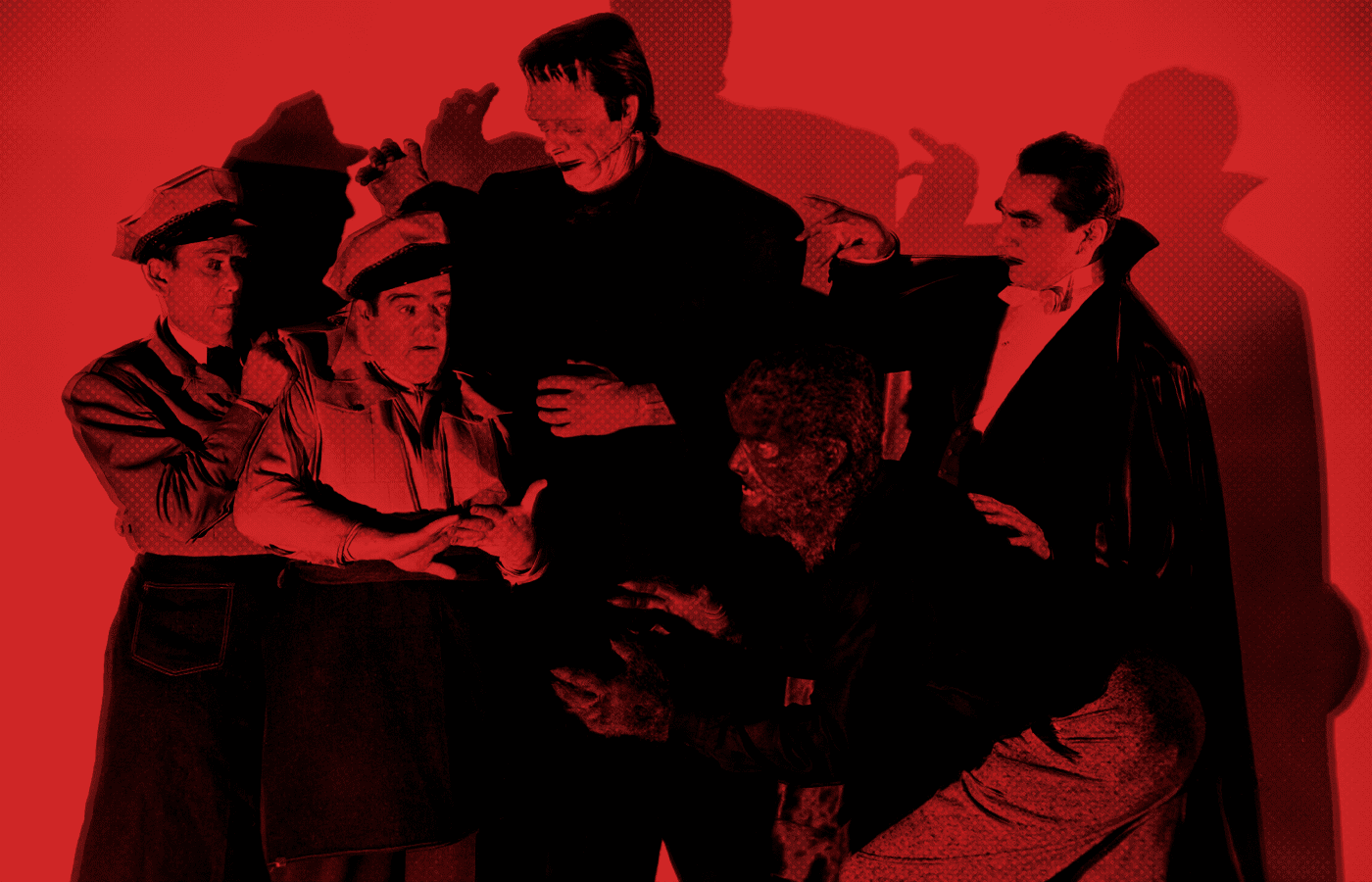 Horror was in an awkward place in the 1940s, stuck between two decades for more renowned by fans and critics—the 30s being the decade in which the genre came into its own, free from the Code, and the 50s for the heyday of low budget, independent drive-in classics were made with lots of ambition and plenty of rubbery monsters.

However, there is much creativity to be found in the best 1940s horror films, standouts that built on what came before, reacted to contemporary cinema and laid the foundation for what would come beyond. Join us as we count down the top ten terrifying 1940 horror movies!

Brendan Fraser’s Mummy flicks owes a lot to this first sequel to Universal’s original Mummy films. The Mummy’s Hand is heavy on the action and comedy, creating a far less dreadful atmosphere than its predecessor and fusing the horror, which still packs a pretty spooky punch, with a bit of fun. It’s an approach that many Mummy films would subsequently take, as there seems to be something alluring about this film’s adventurous overtones.

The Mummy’s Hand also helped revitalize what was, at the time, Universal’s least popular monster, re-focusing the menace as a mute brute that stalked his victims like a proper slasher, which was likely for the best as the change distinguishes the Mummy as a pure monster, while the other Universal Monsters would continue to be humanized.

The mind of a man put to death for a crime he did not commit is transplanted into the body of a gorilla by a mad scientist, and with his newfound animal strength, he takes revenge on the gangster who has “subjugated” his sister.

This one is a touch more obscure than other entries on this list, but it’s one of the more charming. I’m a sucker for any flick with a cheap gorilla costume, and this certainly delivers in that aspect, but it’s also a fascinatingly off-beat picture for the time.

Mixing horror and film noir elements (which we’ll see a lot of in 40s horror), The Monster and the Girl really anticipates the trend of quick-paced 50s creature features. The kind that prioritized ridiculous plots with healthy helpings of sleaze that sneaked past censors. In retrospect, it also benefits from the all-too-important camp factor that the modern horror fandom gravitates to so aggressively these days.

A mad scientist surrenders to his paranoia and uses radiation to shrink his colleagues. Now, they must contend with a towering psychopath and a world no longer their own.

To anticipate trends in 50s genre films, perhaps no horror film of the 40s is memorable as Dr. Cyclops, which was the first film to mythologize radiation after WWII and demonize the dangers of its application.

The film makes great use of the paranoia and anxiety the world felt after the dropping of the bomb—anxiety that the world was no longer as small as it once was, and that we now had the power to destroy ourselves at the push of a button. This anxiety made people feel small and insignificant as one of Dr. Cyclops’ victims.

Hollywood was not kind to Bela Lugosi, but the Count found work when he could, even in productions that were less than prestigious. The Devil Bat is one of those, a Poverty Row cheapie from Monogram that would have been unwatchable were it not for the magnitude of Lugosi’s presence.

He instantly brings a shine to the film and delivers one of his finest performances as a vengeful scientist with a scent-sniffing, sanguinating vampire bat. He truly does capture some of the authenticity he had as Dracula.

RELATED: Looking At How The Blood Flows: An Overview Of Must-See Horror Film Documentaries

Just look at how he marks his next victim. They cordially say good night to their supposed friend, to which Lugosi offers a somber, “goodbye.” It’s deliciously spooky!

Did you know that the Scarlet Claw is the first ever proto-slasher? This Sherlock Holmes classic sees the master detective and Dr. Watson travel to a village plagued by brutal murders that the townspeople attribute to a supernatural menace, a belief further encouraged by an honest to god occult society.

Of course, this is less a horror film and more a mystery, so the point of the picture is to be a fly on the wall as Basil Rathbone does his thing as Sherlock Holmes, and he does it better than any other actor in the role. Holmes pokes holes in the notion of monsters and the occult until he uses his logic to solve the case.

RELATED: How Shin Godzilla Became The Face Of The Franchise

However, with the uncertainty of the case’s otherworldly aspects as the bodies continue to pile up, watching the Scarlet Claw is a fun little B-Movie road map to what would eventually become slashers like Friday the 13th or Prom Night.

The Seventh Victim is a complicated tapestry of film noir and occult horror that would be more at home in either the pre-code era of Hollywood or today’s “elevated horror” subgenre. It’s production design is incredibly atmospheric; deep, black shadows and confined spaces create an à propos mystique to the plot as it unfolds while the tension grows more and more oppressive.

RELATED: #ContinueTheMonsterVerse: Where To Take The MonsterVerse After Godzilla vs Kong

Like any Val Lewton production, the Seventh Victim can be difficult, convoluted even, but there is much here thematically to read into and enjoy, especially in terms of the misuse of women in a secretive system built on the exploitation of humanity for gain. It’s a wonderfully sneaking condemnation of the Hollywood system that was still so powerful at the time of its release.

Cat People is another twisting, moody psychological horror soaked in shadows from Val Lewton that pushes the envelope of the standards set down by the Hays Code. However, where other films were far less impressive than they could have been after bending under the Code, Cat People revels in its mysterious, sexually suggestive atmosphere, which is ensured by the crisp and compact direction of Jacques Tourneur.

The best way to keep a monster kid happy is to give them more monsters! It would work years later in films like Destroy All Monsters and Freddy vs. Jason, but this one started it all.

The phrase “monster mash” isn’t a thing without Frankenstein Meets the Wolf Man. It truly is the first of its kind—a crossover putting two supremely popular characters on a collision course towards an epic battle. The first half of this film is fairly straightforward stuff. Larry Talbot (Lon Chaney Jr) is still alive, desperately seeking an end to his wolfish suffering. It’s a formula that several subsequent sequels starring the Wolf Man (and others) would take.

Here, the Wolf Man’s search brings him to the village Frankenstein, and the audience’s anticipation really boils when the Frankenstein’s Monster (Bela Lugosi) is discovered, waiting to be reanimated once again. With a fairly brisk runtime, we’re not kept waiting too long for the inevitable, and the terrible twosome soon engage in a gloriously fun battle. To be sure, Frankenstein Meets the Wolf Man certainly does not feel as prestigious as any of its 1930s counterparts from Universal, but the fun makes this picture a winner!

We move from the sequel to the original, and there’s nothing that beats the Wolf Man! This was yours truly’s favorite Universal Horror film growing up and was in constant rotation in my VCR.

To say nothing of this film’s atmospheric sets, which rank as high as Dracula and Dr. Frankenstein’s respective castles, it is the film’s lead that has continued to endear this film to audiences decades later.

Lon Chaney Jr gives a defining performance as the title terror, putting him in as high regard as Lugosi’s Dracula and Karloff’s Monster. His performance as the lycanthropic Larry Talbot is closer to Karloff’s in my estimation because of the natural sadness Chaney brings to the role. We meet him as a charming young man returning home to mend familial relationships, only to see his good will rewarded with a violent curse that ruins him.

There’s something devastating in Chaney’s eyes throughout the film, like they’re constantly pleading with us to help him. But, there’s nothing anyone can do to save poor Mr. Talbot. He’s doomed to stalk the foggy forests of his English home.

Parting is such sweet sorrow!

Not only is Abbott and Costello Meet Frankenstein one of the final monster movies of the 1940s, it marks the final appearance of Universal Monster mainstays Dracula, Frankenstein’s Monster, and the Wolf Man, as well as the end of the second cycle of the Universal Horror canon. However, they all go out with quite a bang!

Setting the pace for horror comedies yet to come like the Evil Dead franchise, this film is a perfect blend of the laughs and the monster mayhem. If you’ve ever wondered what you might do if you found yourself trapped in a horror film, Abbott and Costello bumbling around the petrifying proceedings is probably close to how we’d all react. Though, one wonders if we’d have quite as many zany one-liners in the pocket if we were to actually come face to face with Count Dracula like Lou Costello does.

Speaking of Dracula, this film marks the return of Bela Lugosi to the role that made him famous on screen, the role that launched Universal Horror 18 years earlier. As was mentioned before, Hollywood was never kind to Bela, so it’s incredibly gratifying to see him come back to Universal, the house he built, and close out this chapter. He works particularly well alongside Abbott and Costello, a perfectly straight man to their antics. Especially Costello, who it would appear Lugosi took extra glee in tormenting.

The production value here also seems a touch larger than the monsters were typically getting from Universal at this time. It’s possible the studio knew that these perennial spooky favorites were heading to the grave to slumber for a while and wanted to give them a proper send-off. It certainly appears that way watching the film now, as it feels like a celebration of all the thrills and chills that came before!

Did you like our variety of vexing films to give you all the thrills and chills? What’s your favorite 1940s horror movie? Did it make it on our list? Let us know on social media today!