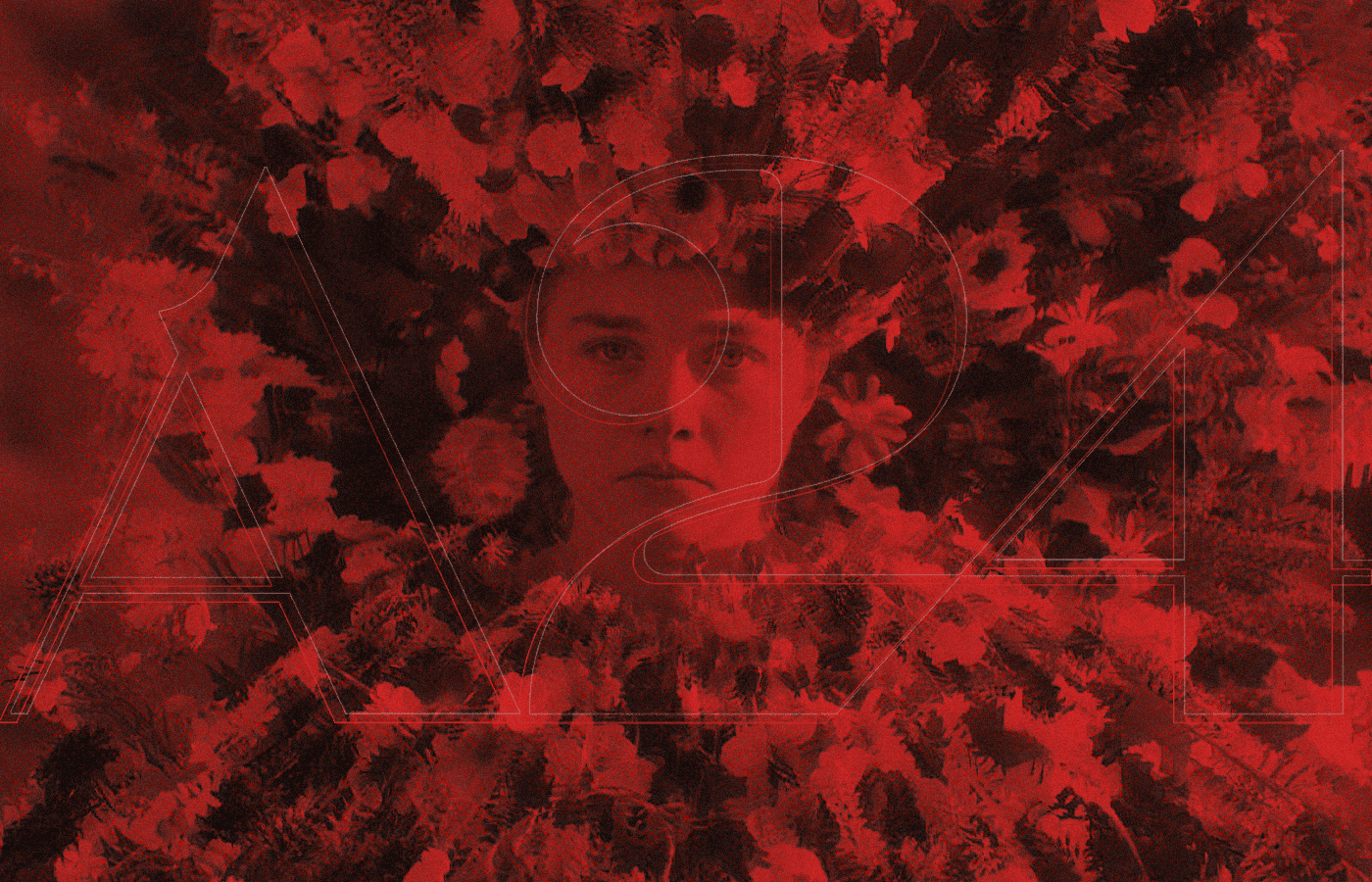 The Best A24 Horror Movies

A24 is a film and television distribution company that has taken the art house scene by storm. Besides being the group behind the hit television series Euphoria, A24 has been “killing” it in recent years with their genre film content. Since the release of their divisive folk-horror film The Witch, they’ve made a sizable corner for themselves in the horror movie fandom.

An A24 horror movie is often a slow-burn plot with disturbing imagery accompanied by complex themes. Whether you’re a die-hard horror movie fan or looking to explore the rest of A24’s filmography this list should familiarize you with their terrifying catalog. Today we wanted to discuss what we think is the very best A24 horror movie. Enjoy!

Midsommar stars Florence Pugh and Jack Reynor. It was directed and written by Ari Aster. The film was produced by Square Peg and B-Reel Films. It was distributed by A24. The film follows a group of friends who travel to Northern Europe to visit a fabled Swedish mid-summer festival. What begins as an idyllic retreat quickly devolves into an increasingly violent and bizarre competition at the hands of a pagan cult.

RELATED: Repackaging Fear: Elevated Horror in the A24 Era

Midsommar marks an interesting return of the folk-horror subgenre in film. Similar to its predecessors, Midsommar is shot entirely during the day, there’s no hiding what horrors lurk within the woods because it’s all exposed in saturated daylight. Midsommar is brutal, melancholic, and a great example of how those in grief can be taken advantage of. This is what makes it one of the best A24 horror movies.

The Lighthouse stars Willem Dafoe and Robert Pattinson. It was directed by Robert Eggers and written by Robert and Max Eggers. The film was produced and distributed by A24. The film follows two lighthouse keepers trying to maintain their sanity while living on a remote and mysterious New England island in the 1890s.

Between Willem Dafoe and Robert Pattinson, The Lighthouse is never short of all the manic energy you’ll ever need. True isolationist horror at its finest. With the upcoming release of The Northman, revisiting this Robert Eggers contemporary classic will serve you well.

The Witch stars Anya Taylor-Joy, Ralph Ineson, and Kate Dickie. It was directed and written by Robert Eggers. The film was distributed by A24. The film follows a family in 1630s New England who’s torn apart by the forces of witchcraft, black magic, and possession.

While shot in mostly all-natural lighting, the film is a gradient of greys. Its cold and depressing color palette only serves the film to hit even harder as it reaches its third act. Anya Taylor-Joy does a phenomenal job at expressing the wide complex range of emotions throughout the film.

Green Room stars Anton Yelchin, Imogen Poots, and Alia Shawkat. It was directed and written by Jeremy Saulnier. The film was produced by Board Green Pictures and distributed by A24. The film follows a punk rock band who’s forced to fight for survival after witnessing a murder at a neo-Nazi skinhead bar.

Green Room has to be one of my personal favorite horror/thrillers on this list. Director Jeremy Saulnier takes Hitchcockian levels of tension to a whole other level but designs a horrifying plot that no one can anticipate. Green Room is sickening, brutal, fast-paced, and visceral. Everything you’d ever want in a horror film. If you’ve seen Green Room already we also recommend checking out Blue Ruin.

Hereditary stars Toni Collette, Alex Wolff, and Milly Shapiro. It was directed and written by Ari Aster. The film was produced by PalmStar Media and distributed by A24. The film follows a grieving family is haunted by tragic and disturbing occurrences.

RELATED: VelociPastor – Being a Creator in the 21st Century

Though the horror side of A24 garnered its fandom through The Witch, you could argue it was propelled by Hereditary. The film examines the things we inherit that aren’t strictly genetic. How the traits of your ancestors may determine your future. Hereditary is nihilistic, cold, and nothing short of anxiety-inducing.

It Comes at Night stars Joel Edgerton, Christopher Abbot, and Carmen Ejogo. It was directed and written by Trey Edward Shults. The film was produced by Animal Kingdom and distributed by A24. The film follows a secluded family within a desolate home as an unnatural threat terrorizes the world, a man has established a tenuous domestic order with his wife and son. Then a desperate young family arrives seeking refuge.

It Comes at Night is A24 in their purest horror film form. The movie’s “monster” may leave you intrigued or disappointed but regardless, another dread-filled journey that made it an essential picture to include on our list.

The Killing of a Sacred Deer stars Colin Farrell, Nicole Kidman, and Barry Keoghan. It was directed by Yorgos Lanthimos and written by Yorgos Lanthimos and Efthymis Filippou. It is based on the play Iphigenia in Aulis by Euripides. The film follows a charismatic surgeon, who is forced to make an unthinkable sacrifice after his life starts to fall apart when the behavior of a teenage boy he has taken under his wing turns sinister.

Without context, The Killing of a Sacred Deer is incredibly bizarre, with context… well it’s still odd. The film plays out like a contemporary Greek tragedy with a Hitchcock-like ambiance. All the players deliver all their lines in a monotone, almost apathetic fashion. The result is an unsettling performance from the protagonists and antagonists alike. An intriguing A24 horror movie that should be viewed at least once.

Saint Maud stars Morfydd Clark and Jennifer Ehle. It was directed and written by Rose Glass. The film was produced by Film4 and distributed by StudioCanal. The film follows a pious nurse who becomes obsessed with saving the soul of her dying patient.

Saint Maud is a lot… and in the greatest kind of way. Rose Glass provides the viewer with a brilliant descent into pure terror with her A24 horror movie. The film is laced with religious zealotry along with subtle commentary on mental illness. Saint Maud is another film where its ending will determine your level of appreciation towards its overarching plot.

Ex Machina stars Domhnall Gleeson, Alicia Vikander, and Oscar Isaac. It was directed and written by Alex Garland. The film was produced by Film4 and distributed by A24. The film follows a young code monkey who is selected to participate in a world-changing experiment in synthetic intelligence by determining the human qualities of an advanced A.I.

Ex Machina plays out like a contemporary ‘Turing Test’ put to film. This A24 horror movie centers itself around one location but it makes full use of its set with its intelligent story. The special effects are superb and again the set design is just gorgeous. Not your typical evil robot movie, but one with softer edges that will leave you quite unnerved.

The Blackcoat’s Daughter stars Emma Roberts, Kiernan Shipka, and Lucy Boynton. It was directed and written by Oz Perkins. The film was distributed by A24. The film follows two girls who have to fight a mysterious force as they get left behind at their boarding school over winter break.

The Blackcoat’s Daughter is helmed by Oz Perkins, the same director of the highly underrated Gretel & Hansel film that came out a few years back. The film is brimming with atmosphere and tension. It’s an extremely psychological horror flick packed with angst and contemplation. This will not be every horror fan’s favorite picture but for those that do, The Blackcoat’s Daughter provides arthouse cinematic terror of the highest caliber.

What Are Your Favorite A24 Horror Movies?

There are several extremes of horror for every type of film fan. We hope you enjoyed the list of our favorite A24 horror movies! Did we miss any of your arthouse horror favorites? Maybe you found a few you haven’t heard of? Let us know on social media!