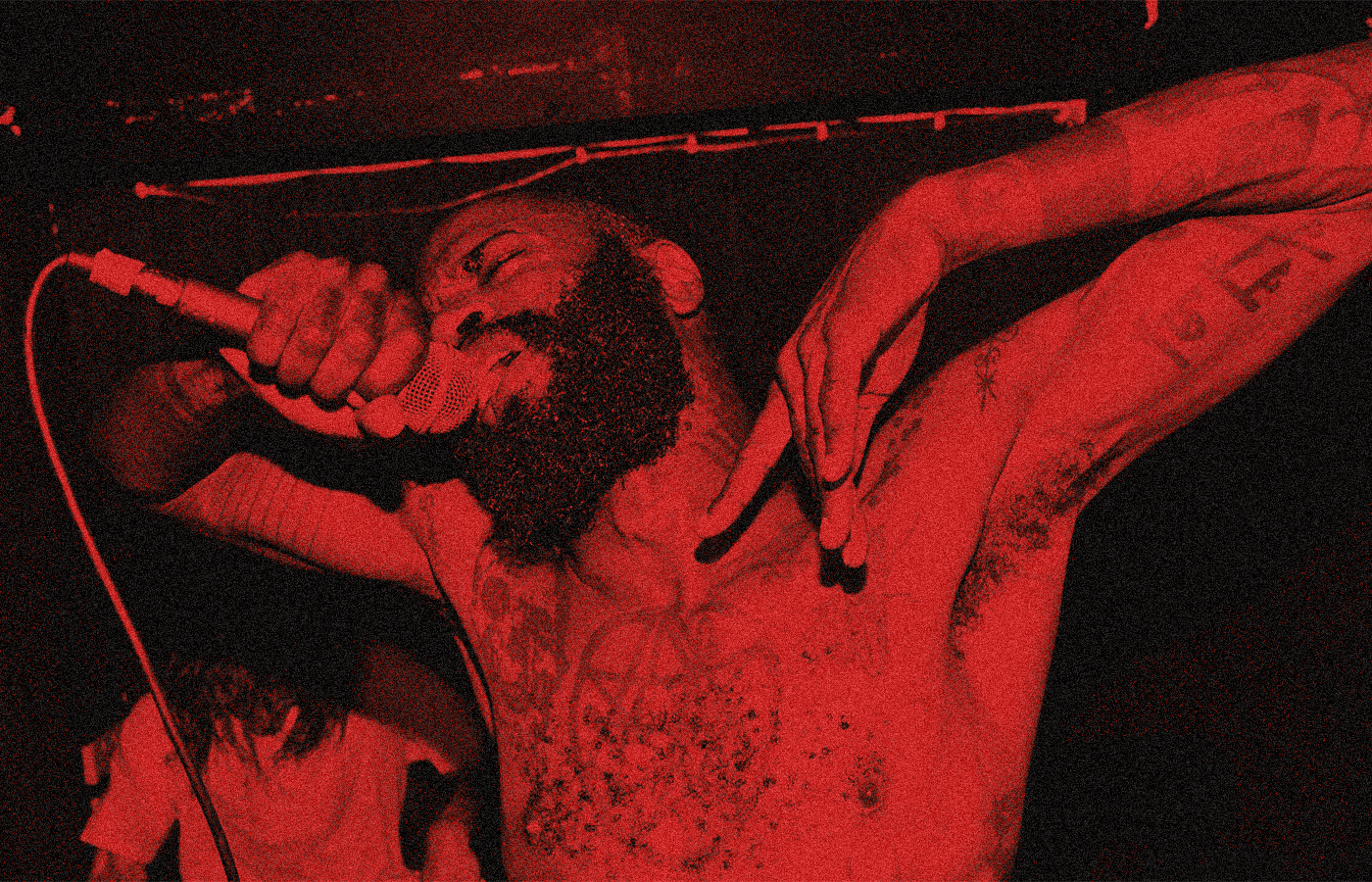 Death Grips is an experimental hip hop trio from Sacramento, California. The group is made up of vocalist MC Ride, drummer Zach Hill, and producer Andy Morin. Death Grips has released six full-length albums, and four EPs. Their most recent album, Year of the Snitch, was released in 2018.

The sound that Death Grips provides its listeners is often described as loud, angry, and dissonant. While this is true, Death Grips has developed their own unique sound that makes them stand out in the modern music landscape. They take the chaos of punk rock, the digital tones of electronic music, and the grooves of hip hop to make songs that sound full and unique.

Death Grips is hyper-creative when it comes to their production style. They take hip hop-based sampling techniques and turn them on their head. Their combination of live and electronic drums creates a lot of new and interesting sounds. There are two things that help create the controlled chaos that we all love.

Today we want to discuss our seventeen favorite Death Grips songs. They are in no specific order, so don’t take offense that Guillotine is the first track on the list. Just kidding, enjoy!

Beware is the first track on Death Grips 2011 album Exmilitary. The album begins with a long speech from Charles Manson, before MC Ride comes in with a chorus that is loved by Death Grips fans. I am the beast I worship.

OH SHIT IM FEELING IT! Takyon (Death Yon) shows MC Ride delivering hard rap lyrics. Much like Guillotine, this is one of Death Grip’s more straightforward hip hop songs. Even thought it isn’t Death Grip’s craziest song, it is one that has been loved by fans since it came out.

Getgetgetgetgotgotgotgot. Get Got is track one on Death Grip’s 2012 album The Money Store. The track features samples from Music From Saharan Cellphones. If you aren’t familiar with that album, I would suggest looking into it. The whole story behind music in Saharan Africa is very interesting.

Much like Get Got, Punk Weight also kicks off with a sample from Music From Saharan Cellphones. Honestly, this is a track that I don’t see a lot of Death Grips fans discussing, but it has always been one of my favorites. The intro is long, but well worth the wait to hear the blown-out drum and bass groove kick in.

What I love about Come and Get Me is the drum patterns during the intro of the song, and how they eventually blend into the rest of the beat. I have tried to recreate a similar sound myself many times and have failed.

Come Up and Get Me is track one on Death Grips’ 2012 album No Love Deep Web.

7. You Might Think He Loves You For Your Money But I Know What He Really Loves You For It’s Your Brand New Leopard Skin Pillbox Hat

Yeah, I know. It’s a great song title. It’s also a great song. What I love about You Might Think He Loves You is when the main beat kicks in. It is just so heavy and dirty sounding. The music video is great too, I think MC Ride shows off the full spectrum of human emotions.

You Might Think He Loves You For Your Money But I Know What He Really Loves You For It’s Your Brand New Leopard Skin Pillbox Hat is track one on Death Grips’ 2013 album Government Plates.

I first heard Hot Head when it was featured in Donald Glover’s television series Atlanta. I was listening to Death Grips at the time but had not ventured far outside of The Money Store. Hot Head is a great track, especially for Death Grips fans who typically listen to rock music. I feel that this track really embodies the punk rock aesthetic that is found throughout much of Death Grip’s catalog.

9. Bubbles Buried In This Jungle

I love the distorted bassline in this song. The beat in Bubbles Buried In This Jungle is really groovy. While many Death Grips songs can come off as disjointed and incoherent, this is one track you can really vibe to.

10. Three Bedrooms In A Good Neighborhood

RELATED: All I Know Is Pain – The 33 Greatest DMX Quotes

I’M DOING HANDSTANDS ON HER TRANS AM! What I love about Death Grips is Online is the main sample/synth they use for the melody. It almost sounds like it could be in the theme song for a superhero television show. This track has a lot of good parts to it and the song structure keeps everything moving.

Death Grips is online is track one on Death Grips’ 2018 album Year of the Snitch.

That may sound funny, but Linda’s In Custody is a bit of a weird track for Death Grips. This song, and MC Ride’s vocals are a bit tame and toned down compared to a typical Death Grips track. I still love it though. I often use it as a palate cleanser when I am listening to a lot of DG.

Linda’s In Custody is track four on Death Grips’ 2018 album Year of the Snitch.

No Love has always been one of my top five favorite Death Grips tracks. The track has a really nice groove it, and I’ve always loved the song structure. No Love also appears in season 1, episode 11 of the animated series Bojack Horseman.

No Love is track three on Death Grips’ 2012 album No Love Deep Web.

On GP is not a track to be discussed lightly. Most Death Grips fans, myself included, will tell you that this track is some of the group’s most emotional work to date. Death Grips is no stranger to discussing depression and suicide in their lyrics. However, On GP takes these concepts to the next level.

On GP is track nine from disc 2 (Jenny Death) of Death Grips’ 2014 album The Powers That B.

It is no secret that the first disc of The Powers That B contains a lot of Bjork samples. Out of all of her samples on this album, this might be my favorite. The track itself is very disjointed and chaotic, but the production is on point.

I STAY NOIDED! I’ve Seen Footage was one of the first Death Grips songs I ever heard. It ended up in a list of recommended songs in whatever music streaming service I was using at the time. I had no idea who Death Grips was, but I quickly fell in love. I’ve always been a fan of experimental and outside-the-box creative music. Death Grips definitely scratch that itch for me.

What Do You Think Are The Best Death Grips Songs?

We hope you enjoyed the list of our favorite Death Grips songs. Did we miss any of your favorites? Let us know on social media!