From cursed to possessed, the dolls sure are killer! 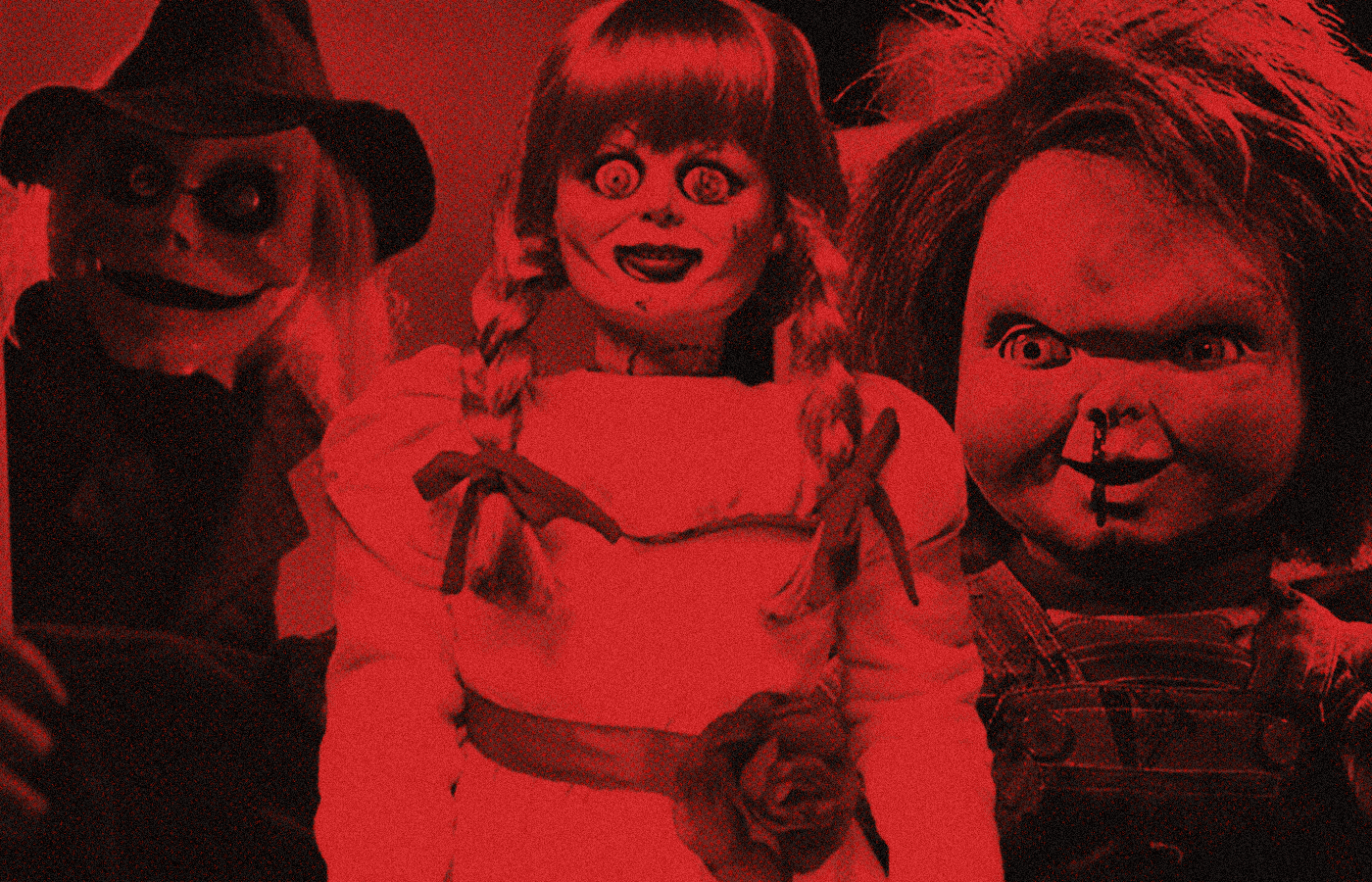 So is it unanimous at this point that dolls can be creepy as hell? So many children’s toys reside within the uncanny valley, something being so close to human but just slightly off and because of it our fight or flight response is triggered. Since dolls and similar inanimate objects can just unsettle us in many ways its led to a plethora of doll-focused horror movies.

Dolls provide children with love, warmth, and security – but what happens when those cute faces are hiding something completely sinister? From killer kids toys to Christmas creatures, today we wanted to go over ten of our favorite doll horror movies. If we missed any of your favorites, let us know on social media. Enjoy!

Tales from the Hood is directed and co-written by Rusty Cundieff with Darin Scott co-writing the screenplay. Tales from the Hood stars an ensemble cast that includes Clarence Williams III, Corbin Bernsen, Rosalind Cash, David Alan Grier, and Lamont Bentley. The film features four different stories that center on three drug dealers trying to buy from a strange and mysterious mortician.

Tales from the Hood is by far one of the most socially aware and underrated horror anthology films. The film tells four stories on many issues that plague Black communities such as police corruption, domestic abuse, racism, and gang violence. We included Tales From the Hood in our list of best doll horror movies because of its segment titled ‘Plantation Dolls’. A former KKK leader and politician sets up office in an old slave plantation, which sparks protests. Within the house are dolls that supposedly embody the souls of long gone slaves. The dolls comes to life and seeks revenge upon the new racist occupant!

Suddenly in the Dark is directed by Young Nam Ko and written by Sam-yuk Yoon. The film stars Il-bong Yun, Yeong-ae Kim, and Ki-seon Lee. This Korean horror film follows a wife who begins to suspect her husband is cheating after the arrival of their new housekeeper, who carries a mysterious wooden doll with herself.

RELATED: Understanding Undeath as PTSD in Deathdream (1974) and Sella Turcica (2010)

Suddenly in the Dark plays off of early Korean vendetta motifs and explores questionable morality in its characters. Shot in the early 80s, this doll horror film utilizes American horror imagery with a direct visual reference to Stanley Kubrick’s The Shining. The film sets itself apart though making itself one of the earliest films in the possession sub-genre. A great film for those looking to expand their exposure to Korean genre films.

Child’s Play is a horror classic that is written by Don Mancini and directed by Tom Holland. It stars Catherine Hicks, Chris Sarandon, Alex Vincent, Dinah Manoff, and Brad Dourif in the iconic role of Chucky. The plot follows a young boy named Andy who after being implicated in several crimes, turns out that his “Good Guy Doll” is possessed by a vengeful serial killer.

RELATED: Shadow and Bone Review (2021) – A Fantasy About Potential that Gambles Its Own

Chucky is back in his first sequel that was written by Don Mancini and directed by John Lafia. Child’s Play 2 stars Brad Douriff, Alex Vincent, and Christine Elise. The plot follows Andy, now in foster care, having to deal with the trauma of the first film while Chucky has been resurrected and wants revenge.

RELATED: A Tapestry of Horror – Genre in Your Vice Is a Locked Room…(1972)

While the first Child’s Play introduced Chucky to the masses, Child’s Play 2 solidified his status as a horror icon. Child’s Play 2 is arguably a better film as it embraces many of the tropes found in doll horror movies, mainly creepiness and dark humor. Because audiences know Chucky is alive, that means we get more of Brad Dourif’s stellar voice work as Chucky and he nails it as one of the best horror villains.

This prequel to The Conjuring spinoff Annabelle is directed by David F. Sandberg and written by Gary Dauberman. Annabelle Creation stars Stephanie Sigman, Talitha Bateman, Anthony LaPaglia, and Miranda Otto. The plot follows the origin of the infamous Annabelle doll and how it would house a demonic presence.

RELATED: His House and the Promising Future of Horror From the Margins

Next to Chucky, Annabelle is arguably one of the most iconic evil dolls in horror pop culture. While the first Annabelle film left something to be desired, this spinoff series to The Conjuring truly found itself in Annabelle Creation. Director David F. Sandberg made a fun haunted house-esque thrill ride with great scares and an eerie atmosphere. A great fusion of ghost and doll horror movies.

Annabelle Comes Home stars Mckenna Grace, Madison Iseman, and Katie Sarife. It was directed by Gary Dauberman and written by James Wan and Gary Dauberman. The film follows paranormal investigators Ed and Lorraine Warren as they take the Annabelle doll into their home then realize how it would soon become a beacon of supernatural events.

RELATED: 1BR – The Fine Line Between Cult and Community

Both a sequel to Annabelle and a prequel to The Conjuring, Annabelle Comes Home is something of a testbed for potential ideas to explore in The Conjuring film universe. Despite being a pilot episode of sorts, the film continues Annabelle Creation’s funhouse style of scares! There are several great sequences with the standout being The Ferryman ghost.

Puppet Master stars Paul Le Mat, William Hickey, and Irene Miracle. It was directed by Charles Band and written by Kenneth Hall and Joseph Collodi. The plot of Puppet Master follows a group of psychics trapped in a hotel as they are pursued by a group of killer puppets.

Puppet Master comes to us from prolific b-movie maestro Charles Band and his production company Full Moon Pictures. Band’s Puppet Master franchise is one of the most prolific direct-to-video horror franchises and the first film is a solid horror affair. All the puppets have unique abilities and powers that make them some of the coolest in the genre.

Dolls stars Stephen Lee, Guy Rolfe, and Hilary Mason. It was directed by Stuart Gordon and written by Ed Naha. The plot follows a family seeking shelter in the home of an elderly dollmaker, only to make the horrifying discovery all the dolls contain the souls of various criminals.

RELATED: A Devilish Month – It Comes From Within

Coming from the mind of Re-Animator and From Beyond, Stuart Gordon’s Dolls is a great bit of 1980s gothic horror. A hidden gem among doll horror movies, Dolls is a film that has a great atmosphere and feels almost akin to the works of E.C. Comics. If you are interested in the work of Stuart Gordon then this is a must-watch!

Dead Silence stars Ryan Kwanten, Amber Valletta, and Donnie Wahlberg. It was directed by James Wan and written by Leigh Whannell. The plot follows a young widower seeking answers to his wife’s death that seemingly involves a deceased ventriloquist from his hometown.

Something of a prototype of James Wan and Leigh Whannell’s supernatural films such as The Conjuring and Insidious films, Dead Silence is a ghostly horror fun through and through. The main antagonist Mary Shaw and her puppets are simply chilling whenever they are on screen. The film is also an engaging mystery and presents the characters in amoral light on whether their past actions were justified.

Krampus stars Adam Scott, Toni Collette, and David Koechner. It was directed and co-written by Michael Dougherty with a screenplay written by Todd Casey and Zach Shields. The plot follows a Christmas family reunion that soon runs amok as they encounter the Christmas spirit of punishment Krampus and his army of helpers.

While the film focuses on the titular demonic force Krampus, a good chunk of Krampus is very much one of the most enjoyable doll horror movies ever! Michael Dougherty essentially gave us a modern Hollywood version of a film that Charles Band would’ve directed as we see many different types of killer toys themed around Christmas. From a man-eating Jack-In-The-Box, psychopathic Christmas angels, and a monstrous Teddy Bear, Krampus provided a goody bag of scary toys from the characters and the audience!

What Are Your Favorite Doll Horror Movies?

We hope you enjoyed our list of the best doll horror movies. Did you discover any new films to watch? Did we miss any of your favorites? Let us know on social media!