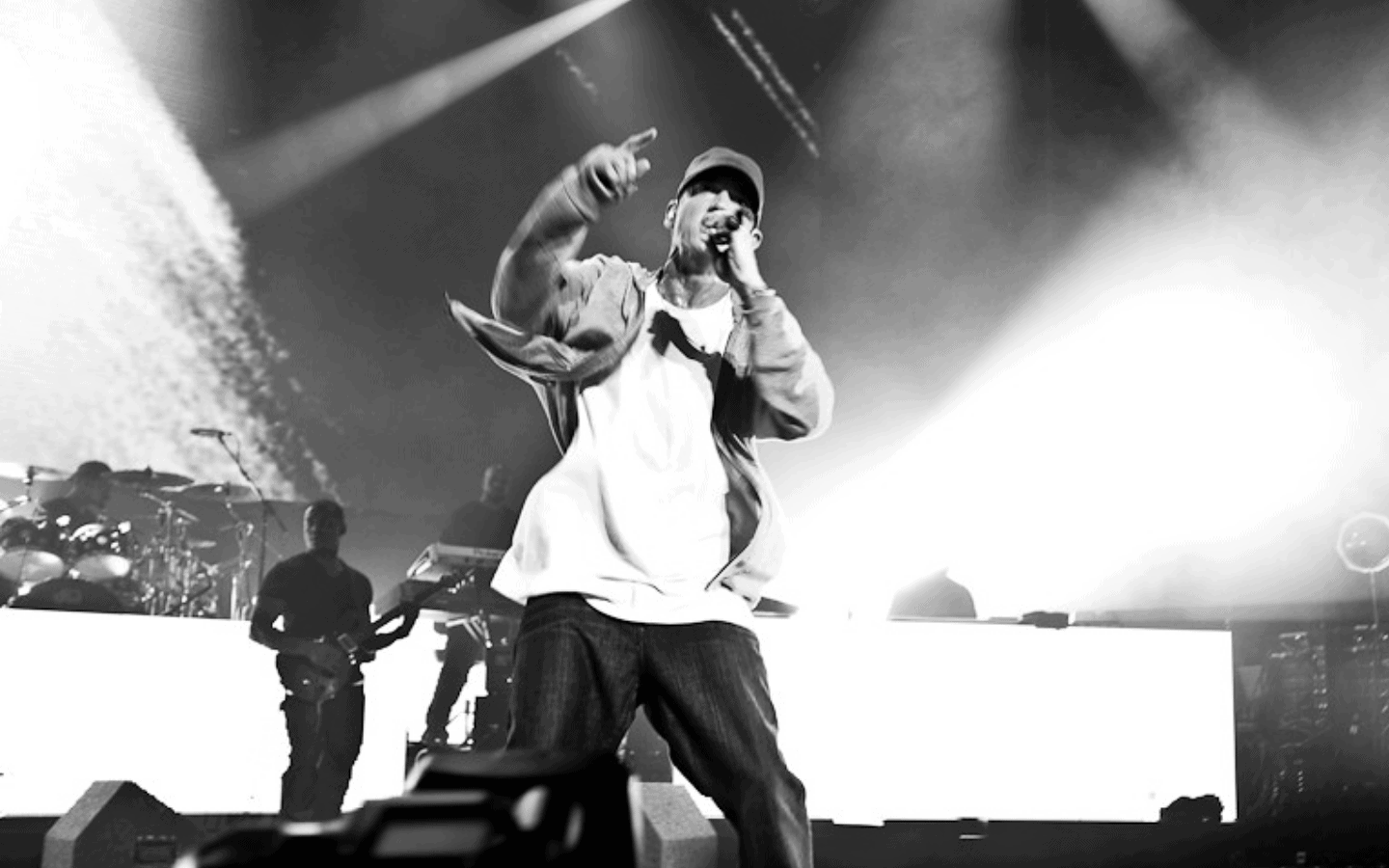 Marshall Mathers, known as Eminem, is a hip hop artist that needs no introduction. He has helped revolutionize hip hop since the release of his first full-length album. His lyrical content and technical skills are hard to beat.

Eminem has one of the most unique and interesting stories in hip hop. He has a history of humorous and offensive lyrics that often make fun of pop culture figures. He has had his battles with drug addiction. He has been able to make a name for himself in mainstream culture despite his unique style.

Today we want to go over our favorite Eminem quotes. We chose our favorite quotes based on the trajectory of his career and the interesting aspects of his journey. If we missed any of your favorites, let us know on social media!

Eminem Quotes About Art And Music

“A lot of my rhymes are just to get chuckles out of people. Anybody with half a brain is going to be able to tell when I’m joking and when I’m serious.” – Eminem

“Anybody with a sense of humor is going to put on my album and laugh from beginning to end.” – Eminem

“Anything I’ve ever said, I certainly was feeling at the time.” – Eminem

“I am who I am and I say what I think. I’m not putting a face on for the record.” – Eminem

“I might talk about killing people, but that doesn’t mean I do it.” – Eminem

“I stopped watching TV because of ‘The Wire.’ Like, ‘The Wire’ ruined everything for me because I don’t even want to watch anything else now.” – Eminem

“If people take anything from my music, it should be motivation to know that anything is possible as long as you keep working at it and don’t back down.” – Eminem

“If there’s not drama and negativity in my life, all my songs will be really wack and boring or something.” – Eminem

“Music is so therapeutic for me that if I can’t get it out, I start feeling bad about myself – a lot of self-loathing.” – Eminem

“Nothing on ‘Relapse’ and very little on ‘Recovery’ was produced by me.” – Eminem

“The emotions in a song – the anger, aggression – have got to be legitimate.” – Eminem

“The writing process, the way I go about it is I do whatever the beat feels like, whatever the beat is telling me to do. Usually, when the beat comes on, I think of a hook or the subject I want to rap about almost instantly. Within four, eight bars of it playing I’m just like, ‘Oh, okay. This is what I wanna do’.” – Eminem

“You know, not to sound corny or nothing, but I felt like a fighter comin’ up, man. I felt like, you know, I’m being attacked for this reason or that reason, and I gotta fight my way through this.” – Eminem

RELATED: 45 Will Smith Quotes That Slap

Eminem Quotes About Life And Fame

“Dealing with backstabbers, there was one thing I learned. They’re only powerful when you got your back turned.” – Eminem

“Everybody has goals, aspirations, or whatever, and everybody has been at a point in their life where nobody believed in them.” – Eminem

“Fame hit me like a ton of bricks.” – Eminem

“I come from Detroit where it’s rough and I’m not a smooth talker.” – Eminem

“I don’t even know how to speak up for myself, because I don’t really have a father who would give me the confidence or advice.” – Eminem

“If you’re the parent, be a parent. You know what I mean? I’m a parent. I have daughters.” – Eminem

“I love the attention but I don’t like too much of it.” – Eminem

“I try to treat all the money I’m making like it’s the last time I’m going to make it.” – Eminem

“It sometimes feels like a strange movie, you know, it’s all so weird that sometimes I wonder if it is really happening.” – Eminem

“My family has never been there for me. They expect things because we’re blood.” – Eminem

“Nobody likes to fail. I want to succeed in everything I do, which isn’t much. But the things that I’m really passionate about, if I fail at those, if I’m not successful, what do I have?” – Eminem

“Now that I understand that I’m an addict, I definitely have compassion for my mother. I get it.” – Eminem

“People can try to reinvent themselves. I don’t think you can really change who you are, though, because who you are is pretty much where you came from and what you’ve done up to now.” – Eminem

“The truth is you don’t know what is going to happen tomorrow. Life is a crazy ride, and nothing is guaranteed.” – Eminem

“Trust is hard to come by. That’s why my circle is small and tight. I’m kind of funny about making new friends.” – Eminem

“Ultimately, who you choose to be in a relationship with and what you do in your bedroom is your business.” – Eminem

“When you’re a little kid, you don’t see color, and the fact that my friends were black never crossed my mind. It never became an issue until I was a teenager and started trying to rap.” – Eminem

“Being a student of hip-hop in general, you take technical aspects from places. You may take a rhyme pattern or flow from Big Daddy Kane or Kool G Rap.” – Eminem

“Certainly, I’m not going to sit on the Internet all day and read what Sam from Iowa is saying about me. But I’m a sponge. I’ve always been a sponge.” – Eminem

“Say there’s a white kid who lives in a nice home, goes to an all-white school, and is pretty much having everything handed to him on a platter – for him to pick up a rap tape is incredible to me, because what that’s saying is that he’s living a fantasy life of rebellion.” – Eminem

“Sometimes I feel like rap music is almost the key to stopping racism.” – Eminem

“When ‘Paul’s Boutique’ came out, I was one of the fans that didn’t get it.” – Eminem

What Are Your Favorite Eminem Quotes?

We hope you enjoyed our list of Eminem quotes. Did we miss any of your favorites? Let us know on social media!