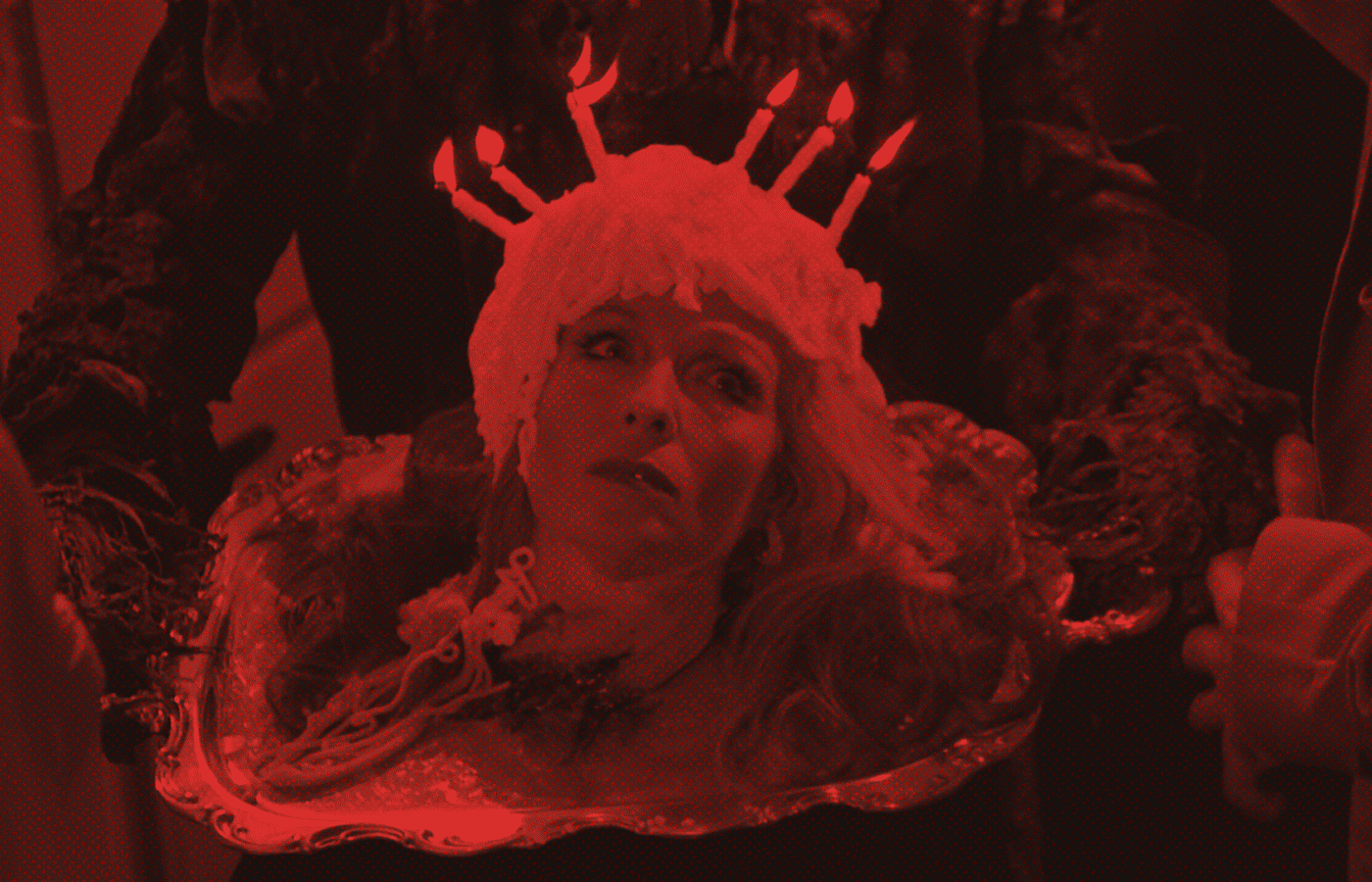 Along with full-length narratives, the horror genre has derived with short-form stories. And there is no better example than horror anthology movies! For those unaware, an anthology film is a feature-length film that contains several shorter narratives that are either connected through a framing story or are just a collection of short films with a central theme of some kind.

Creepshow comes to us from the minds of two horror masters with director George A. Romero and writer Stephen King in his debut screenplay. The film stars an ensemble cast that includes Hal Holbrook, Adrienne Barbeau, Fritz Weaver, Tom Atkins, Leslie Nielsen, Carrie Nye, E. G. Marshall, Viveca Lindfors, and even Stephen King himself. The film follows the contents of an EC Comics-esque horror comic called Creepshow filled with five horror tales such as a farmer dealing with alien plantlife and a man discovering a Yeti-like monster in an antique box,

Probably the most beloved entry on this list, Creepshow is THE horror anthology to end all horror anthology movies. With the powerhouse duo of Romero and King, Creepshow oozes with a style based on EC Horror comics such as Tales from the Crypt and The Vault of Horror. These include sequences that have comic-inspired editing and lighting to replicate the artwork of the comics. Add on amazing special effects from Tom Savani and a wicked sense of humor, it’s clear why Creepshow is a classic.

One could say Creepshow would be the most influential film on this list as after release many more horror anthologies would come to be in either film or television, From the HBO adaptation of Tales from the Crypt, Trick ‘r’ Treat (oh we will talk about it), to Shudder’s Creepshow television series, Romero and King truly defined the horror anthology.

Creepshow 2 is directed by the first film’s cinematographer Michael Gornick with George Romero and Violet Fletcher writing the screenplay. It stars Lois Chiles, George Kennedy, Dorothy Lamour, and Tom Savini. The plot has the framing narrative be animated story features The Creep, the “host” of the Creepshow comic, telling the audience three short segments as well as a sub-plot of a fan of the said comic evading bullies.

While not as beloved as the first film, Creepshow 2 is still a fun time. Based on short stories by Stephen King, all the horror shorts are solid morality tales that would fit right at home in an issue of Tales from the Crypt. The highlight is definitely ‘The Raft’ which is a very tense isolation horror story of several teens stuck on a raft in a lake as they are stalked by a mass of sentient oil. Plus the animated framing narrative is fun to see in an animated horror film, even if it’s a short one.

Based on George A. Romero’s horror anthology television series of the same name, Tales From The Darkside: The Movie is directed by John Harrison. The screenplay is written by George Romero and Michael McDowell. Tales from the Darkside: The Movie stars Deborah Harry, Steve Buscemi, Christian Slater, David Johansen, James Remar, and Rae Dawn Chong. The film is about a young boy trying to distract a witch from eating him by telling him different stories from a book called “Tales from the Darkside”.

A film horror fans consider an unofficial third Creepshow, Tales from the Darkside: The Movie is almost a gothic inverse of the oversaturated Creepshow. While the framing device has a sense of dark humor, the three short stories, one is based on the short story “The Cat from Hell” by Stephen King and another based on the Arthur Conan Doyle short story “Lot No 249”, are very much horror-centric. The best example of the almost gothic nature of these short stories is “Lover’s Vow”, which is a supernatural love story with a tragic end.

VHS features an ensemble of horror directors that include Adam Wingard, David Bruckner, Ti West, Glenn McQuaid, Joe Swanberg, and the filmmaking group Radio Silence. The cast includes the likes of Lane Hughes, Adam Wingard, Hannah Fierman, Joe Swanberg, Sophia Takal, and Chad Villella. The central story of VHS follows a group of criminals who stumble upon the home of an apparently dead man whose house is filled with dozens of different VHS tapes, each with its own horror story.

One of the most unique found-footage and horror anthologies, VHS came out of nowhere back in 2012 and continues to be a stellar example, of both sub-genres. Each segment is a unique found-footage film with each director giving it their own flair and style while keeping an authentic VHS aesthetic (which was seen as novel at the time). There are so many kinds of horror short films that are included such as vampires, slashers, and alien abductions to name a few. A high recommendation for fans of found-footage and horror anthology movies.

This Shudder original and features the ensemble directors of Jennifer Reeder, Chloe Okuno, Simon Barrett, Timo Tjahjanto, and Ryan Prows. VHS 94 stars Anna Hopkins, Kyal Legend, Shania Sree Maharani, Donny Alamsyah, and Christian Lloyd. The plot follows a police raid of what they believe to be a drug bust, only for the police to find almost all the inhabitants dead and dozens of VHS tapes that contain many horrific events.

While the reception of the sequels of VHS became a case of diminishing returns, VHS 94 was the shot in the arm this series needed. With a very diverse team of filmmakers, the newest entry of this list became a darling among horror fans and with good reasons. Each story is wholly unique and features some really good scares and impressive effects work.

The breakout segment is without a doubt “Storm Drain” (directed by Chloe Okuno) features the human/rat monstrosity Raatma that has become something of an icon among horror fans on social media. It may be less than a year old as of the writing of this article, but VHS 94 will delight any fans of horror anthology films!

Black Sabbath is directed and co-written by Italian horror master Mario Bava. The screenplay was also written by Marcello Fondato and Alberto Bevilacqua. The cast includes the likes of horror legend Boris Karloff along with Mark Damon, Michèle Mercier, and Susy Andersen. This anthology film includes three stories that involve a woman stalked by a mysterious man over the telephone, a man claiming to have slain an undead monster, and a nurse who finds a ring and is plagued by the former owner’s ghost.

An early major example of horror anthology movies, Black Sunday is a snack platter of many types of Italian horror movies from the “Master of the Macabe” Mario Bava. Black Sunday includes the classic Giallo thriller, a psychological supernatural tale, and an old-fashioned ghost story. Anyone interested in both Italian horror and horror anthologies owes themselves to watch one of Bava’s most well-regarded works.

Ever since its release, Trick ‘r’ Treat has become an instant classic among horror films and put Michael Dougherty on the map when it comes to genre filmmaking. Dougherty made a Halloween film about Halloween with the stories centered on many of the traditions and iconography associated with the holiday. The film also plays with the format of a horror anthology as the stories are all connected by each segment taking place at a different point on Halloween night with events and characters being seen in other segments.

But the breakout factor of Trick ‘r’ Treat is the enforcer of Halloween itself, Sam. Sam has become a new horror icon on par with the likes of Michael Myers of Freddy Krueger with dozens of merchandise, costumes, and artwork. It’s hard not to love the murderous pumpkin child, he’s adorable!

Twilight Zone: The Movie features a heavyweight team of directors that include Steven Spielberg, John Landis, Joe Dante, and George Miller. The film stars Dan Aykroyd, Albert Brooks, Scatman Crothers, John Lithgow, Vic Morrow, and Kathleen Quinlan. Twilight Zone: The Movie features reimaginings of different episodes of The Twilight Zone such as “A Quality of Mercy”, “Kick the Can”, “It’s a Good Life”, and “Nightmare at 20,000 Feet”.

It would be irresponsible to not address the tragic events of this film where actor Vic Morrow and two children Myca Dinh Le and Renee Shin-Yi Chen died due to a stunt helicopter accidentally crashing on set. It was a case of gross negligence on John Landis and his crew’s part and we feel we must let our readers be informed about this black spot on this film’s legacy.

Despite the tragic history of this film, Twilight Zone: The Movie is a very solid example of horror anthology movies. While the film doesn’t have the class and unparalleled intelligence of The Twilight Zone creator Rod Serling, the filmmakers made the smart decision of retelling these classic tales in that 1980s flair. The highlight is without a doubt Joe Dante’s reimagining of “It’s a Good Life” that features spectacular special effects from Rob Bottin.

Tales from the Hood is directed and co-written by Rusty Cundieff with Darin Scott co-writing the screenplay. Tales from the Hood stars an ensemble cast that includes Clarence Williams III, Corbin Bernsen, Rosalind Cash, David Alan Grier, and Lamont Bentley. The plot features four different stories with the framing narrative centered on three drug dealers trying to buy from what seems to be an eccentric mortician.

Despite its title, Tales from the Hood is by far one of the most socially conscious and relevant examples of horror anthology movies. Director Rusty Cundieff tells four stories on many issues that plague black communities such as police corruption, domestic abuse, racism, and gang violence. It doesn’t shy from the reality of the real horrors that affect many African-Americans and is still sadly relevant today as it was in 1995. Despite the heavy themes, Cundieff still makes sure the film is a fun piece of horror with the central figure Mr. Simms (Clarence Williams III) is a delight to watch on screen.

A classic example of classic Japanese horror, Kwaidan is one of the most acclaimed horror anthologies, so much as it won the 1965 Academy Award for Best Foreign Film. Masterful retellings of classic Japanese ghost stories, many of these are tales of vengeance and despair that make Japanese horror so chilling. If you are interested in the history of J-Horror and horror anthology movies, we implore you to lease give Kwaidan a watch!

What Do You Think Are The Best Horror Anthology Movies?

We hope you enjoyed the list of our favorite horror anthology movies! Did we miss any of your favorites? Let us know on social media!