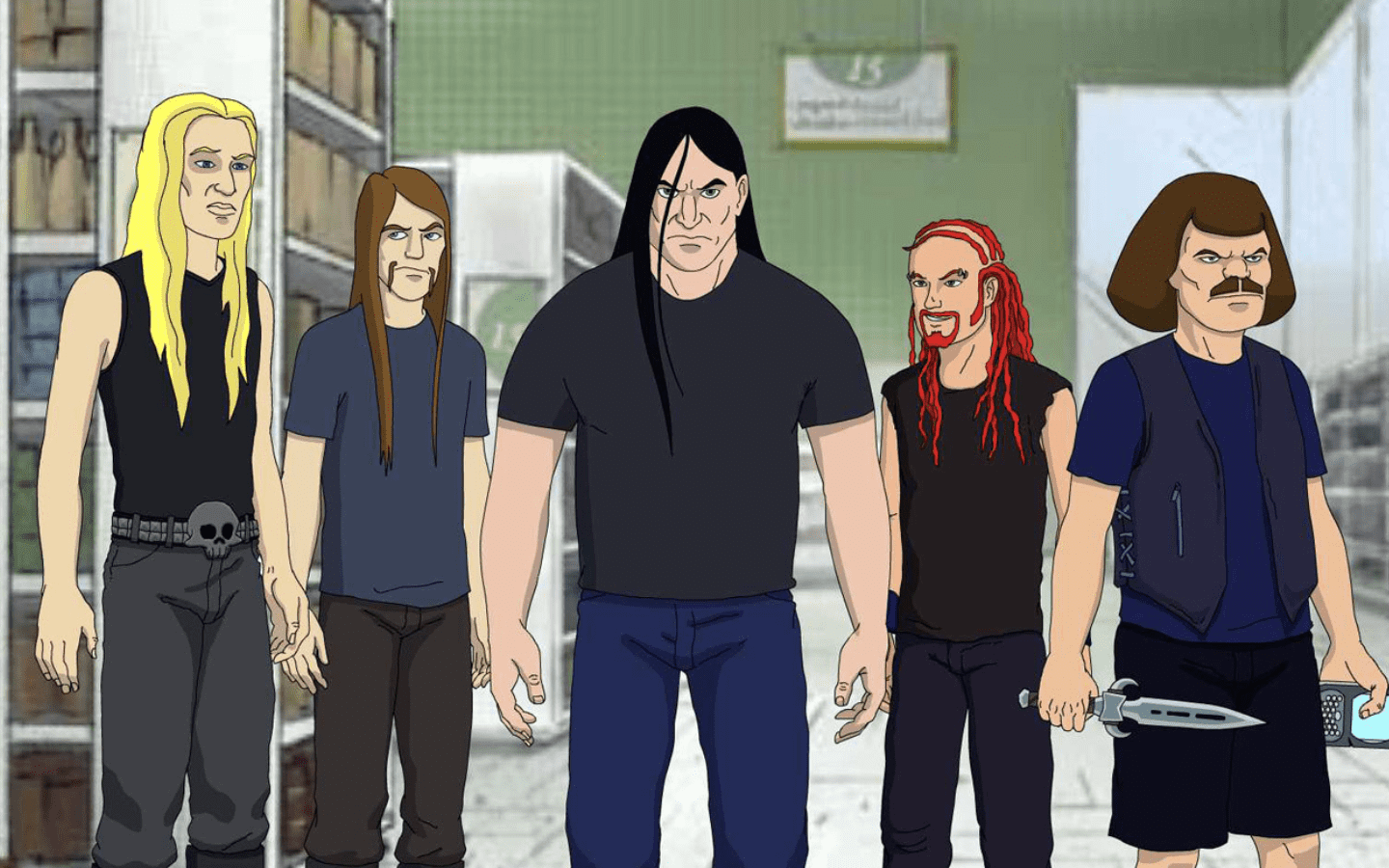 Metalocalypse is a horror comedy animated series created by Brendon Small and Tommy Blacha. It ran on Adult Swim for 61 episodes over the course of seven years. Small and Blacha do many voices on the show. However, Metalocalypse also features the voice talents of Mark Hamill, Malcolm McDowell, and Victor Brandt. The series also features cameos from many heavy metal musicians and people in the music industry.

Dethklok is the biggest metal band of all time. They are so wealthy and famous that their income exceeds that of many countries. Also, they are all pretty dumb. This leads to the band going on hilarious adventures and fighting against The Tribunal, an Illuminati-type organization bent on bringing the band down.

Today, we want to go over our favorite Metalocalypse quotes. If we missed any of your favorites, let us know on social media!

Nathan: Now shut up and listen to this, dick. This is metal for fish.
Skwisgaar: Fish don’t gots no good metal to listens to.

“And now, the blackest present for the most brutal of all bass players…NOTHINGGGGGGGG!” – Nathan Explosion

“I need a hundred beers, exactly. Exactly one hundred, thank you.” – Nathan Explosion

“I think I know what you are all trying to say. We need a space helicopter.” – Nathan Explosion

“Wait a minute, you mean that the murder rate in Canada is higher than Norway? Oh my god, that’s lame, this place is lame.” – Nathan Explosion

“The fact that my parents had sex in order to create me makes me want to be buried alive.” – Nathan Explosion

“We’re in a horrible depression, and I gotta admit, we’re starting to like it.” – Nathan Explosion

Murderface: Is there olives in it?
Old Woman: In what?
Murderface: LEMON TART, WRINKLETITS!

“I’d rather die than go to heaven.” – William Murderface

“I guess I really do have a dog face. Maybe I should throw up and eat it.” – William Murderface

“I woke up with a clown’s hand in my pants today. That’s what I did today.” – William Murderface

“Sorry about being a dick, but sometimes it’s hard to suppress the urge of ruining other people’s lives.” – William Murderface

“Why don’t we just record people dying, like all the world’s leaders or a bunch of ladies? That would be heavy.” – William Murderface

“Why don’t you drill a hole in your head and let all the sap run out?” – William Murderface

“How about you go play records backwards and go kill yourself?” – Skwisgaar Skwigelf

“She was the most promiscuous, womens in Swedens has sex with everybody. Thanks, mom!” – Skwisgaar Skwigelf

“There’s one two things to do in a power outage. Get drunk….one thing.” – Skwisgaar Skwigelf

“Try not to choke you fat tub of shit, we loves you!” – Skwisgaar Skwigelf

“How comes I can’t sits arounds and drinks like Pickle? How comes I can’t fucking sits around and screw sluts or something? But no, you are the cutesy guy that kids like, you gotta helps people gets over their problems. Well, fuck that! You do’s it!” – Toki Wartooth

“It hurts my face. Boy, I really hates it.” – Toki Wartooth

“That’s what families is, peoples you hates.” – Toki Wartooth

“I’m Toki. I slips in and out of diabetic coma. They should makes insulin-flavored candy.” – Toki Warthooth

“Nathan, you’re gonna kill me, but I totally forgot to press record, but here’s the good news, I’m sorry.” – Pickles The Drummer

“Right before I left home when I was a teenager, my dad turned to me and he said “Get out. You belong in a garbage can.” – Pickles The Drummer

“If I can leave you with any wisdom, it would be black out more during the times in your life. So that you don’t remember the life that you had. There.” – Pickles The Drummer

“It’s a grocery store you douchebags! I’m sorry about douchebags, I got low blood sugar.” – Pickles The Drummer

“Guys…it’s a beer.” – Pickles The Drummer

“Dudes, we partied too hard so now our bodies are in terrible shape. So we gotta trick the doctor by making it seem like we’re in really good shape, and there’s only one way to do that: bleach.” – Pickle The Dummer

“Death is an everyday part of the workplace, so when you see a dead body, don’t freak out. Just ring your death bell!” – Facebones

“My video was banned from music television ’cause you could see my junk through my jumpsuit.” – Dr. Rockzo

“Which one of you humps has a cigarette for Dr. Rockso?” – Dr. Rockzo

What Are Your Favorite Metalocalypse Quotes?

We hope you enjoyed the list of our favorite Metalocalypse quotes. Did we miss any of your favorites? Let us know on social media!