We're bringing our knives to the dinner table because these are some of the best Thanksgiving horror movies! 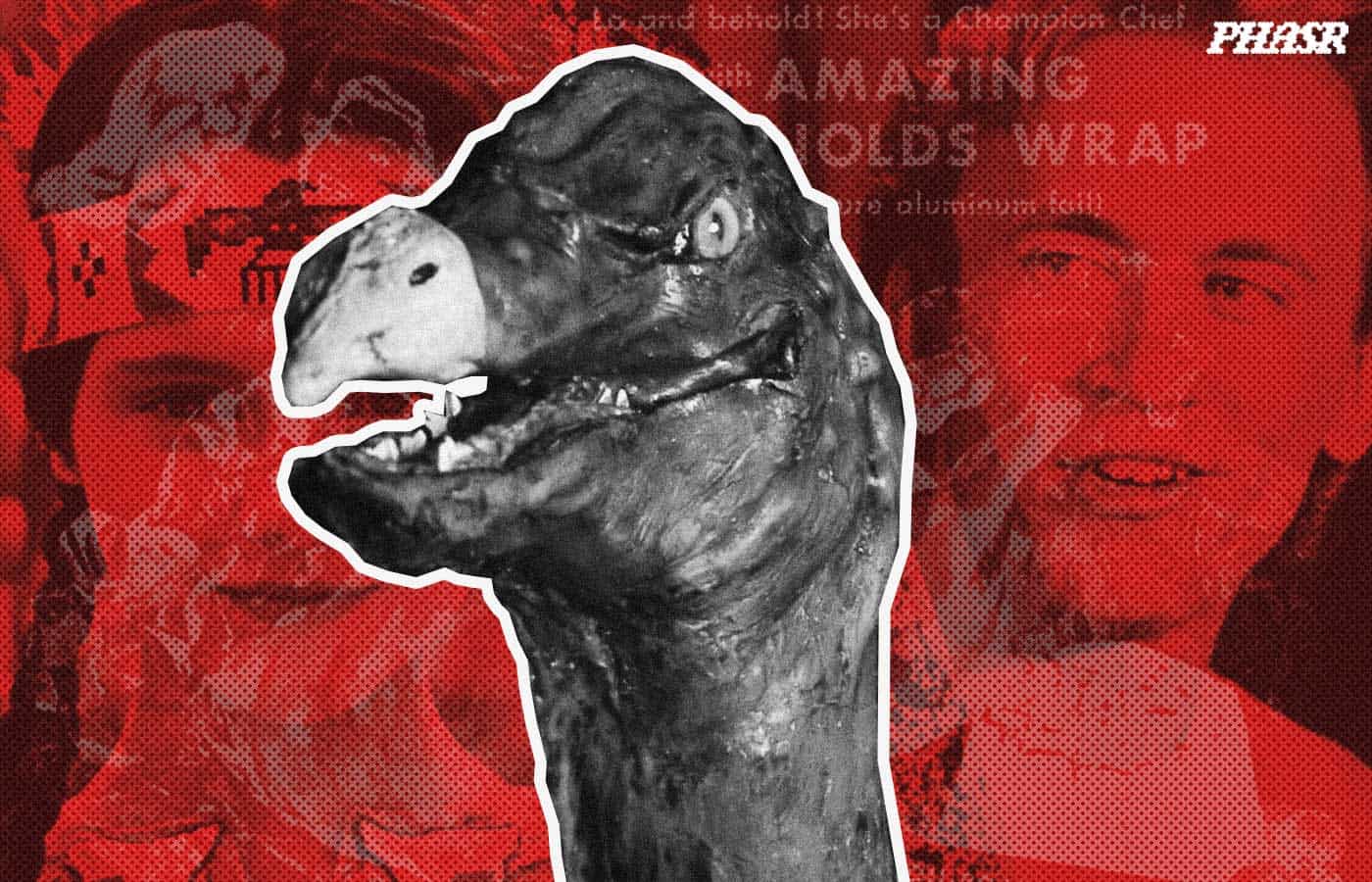 We pour our blood, sweat, and tears into the holiday season…so why not get rid of some stress with a few screams. Thanksgiving is always the awkward benchmark between Halloween and Christmas. That being said we wanted to take some of the scares from October and mix them up with some traditional family festivities December provides. So whether the horror comes from killer turkeys or your loved ones, PHASR is here to recommend thirteen horror movies to get you into the spooky mood this Thanksgiving.

Not all of these films are technically centered around the American holiday but they do share themes of community, warmth, and intense conversations over dinner… We’re bringing our knives to the dinner table today to gut out all the gory innards of our favorite fearful films. Without further ado, these are the best Thanksgiving horror movies. Enjoy!

Directed by Karyn Kusama and written by Phil Hay and Matt Manfredi, The Invitation follows a man who accepts an invitation to a dinner party hosted by his ex-wife, an unsettling affair reopens old wounds and creates new tensions. The film stars Logan Marshal-Green, Tammy Blanchard, and Emayatzy Corinealdi.

The film is a meditation on grief first and foremost, but the dinner party backdrop and the intense awkward conversations that spill late into the evening make this one of the best films to possibly watch this Thanksgiving. It’s a genuinely unsettling film with an ending that leaves most watchers divided. What’s Thanksgiving without awkward dinner conversations? The Invitation is one of the best Thanksgiving horror movies you can watch this holiday season.

MORE IN LISTS: 31 Halloween Movies for the Whole Family!

No that’s not cranberry sauce… Directed by John Grissmer and written by Bruce Rubin, Blood Rage follows a woman and her son who are stalked at their remote apartment community by the son’s unhinged twin brother who has escaped from a psychiatric institution after allegedly killing a man in cold blood years earlier. The film stars Louise Lasser, Mark Soper, and Julie Gordon.

What’s the best Thanksgiving horror movie list without a 1980s slasher flick? Blood Rage has made a revival in recent years among horror fanatics and for good reason. It made our list because it’s one of the very few slasher flicks to actually take place on Thanksgiving! The film is downright silly but surprisingly has a soundtrack that bops. With some legitimate kills, Blood Rage is certainly entertaining to fans of the midnight movie persuasion.

If you’re looking for something that’s a bit stranger and maybe all in on the holiday gimmick, then look no further than Into the Dark’s Pilgrim. Directed and written by Marcus Dunstan with additional writing by Noah Feinberg as well as Patrick Melton, the Hulu exclusive follows a woman who invites Pilgrim re-enactors to her family’s Thanksgiving celebration in an effort to remind them of their privilege and help them bond with one another. The film stars Reign Edwards, Kerr Smith, and Courtney Henggeler. Pilgrim gets way weird but not as weird as some of the other choices on our list.

You’re Next (2011) directed by Adam Wingard plays into the same vibes as The Invitation except for being way bloodier! The film follows an estranged upper-class family. In an attempt to mend their broken ties, Aubrey (Barbara Crampton) and Paul (Rob Moran) decide to celebrate their wedding anniversary by inviting their four children and their children’s significant others to their weekend estate. The celebration gets off to a rocky start, but when crossbow-wielding assailants in animal masks suddenly attack, the Davisons must pull together or die. If you’re looking for themes of damaged family relationships, tons of blood, genuine scares, and an absolutely brilliant final girl, then You’re Next is for you.

The plot description alone sells Blood Freak (1972), so I’m not even going to try. Just back from Vietnam, Herschell (Steve Hawkes) is at loose ends until one day he stops to help the beautiful Angel (Heather Hughes) fix her car. She takes him home, where her scapegrace sister immediately plies him with drugs in order to seduce him. Instantly addicted, he needs money for his habit and takes a job at a turkey farm, where he’s instructed to eat some experimental lab-grown turkeys. He does and undergoes a hideous transformation. Killer mutant turkey man? Sign us up.

ThanksKilling (2008) is the least horrific on this list but still deserves a spot for being as bat-shit insane as it is. Directed and written by Jordan Downey with additional writing by Brad Schulz as well as Kevin Stewart, ThanksKilling follows a possessed turkey that terrorizes five college students during Thanksgiving break. The film stars Wanda Lust, Natasha Cordova, and Lindsey Anderson. This low-budget, “fowl” mouthed killer bird will definitely bring some interesting conversations to the dinner table this holiday.

Run for your life. Directed by Olly Blackburn and written by Anthony Jaswinski, Kristy follows a college girl who is alone on campus over Thanksgiving break and is targeted by a group of outcasts, she must conquer her deepest fears to outwit them and fight back. The film stars Haley Bennett, Ashley Greene, and Lucas Till. Kristy is a contemporary take on the 80s slasher subgenre. The film offers plenty of scares while having fun throughout.

Be careful what you bring back. Directed and written by Mark L. Smith, Séance follows a group of college students over Thanksgiving break who inadvertently bring back the ghost of a little girl’s killer. The film stars Bridget Shergalis, Tori White, and Chauntal Lewis. The film is your usual ghost story fare but with an early 2000s flair.

Be it ever so humble, there’s no place to hide. Directed by Nettie Peña and written by Thomas Bush, Home Sweet Home follows an escaped mental patient who steals a station wagon and makes his way to the Bradleys’ Thanksgiving celebration, where he plans to make them a little less thankful… The film stars Jake Steinfeld, Vinessa Shaw, and Peter De Paula. Home Sweet Home is one of the few slasher films centered around the Thanksgiving holiday, and one of the few to be directed by a woman.

It’s Thanksgiving, and the Black Friday shoppers are coming for deals, bargains, and blood! Directed by Casey Tebo and written by Andy Greskoviak, Black Friday follows a group of toy store employees who must protect each other from a horde of parasite-infected shoppers. The film stars Devon Sawa, Ivana Baquero, and Ryan Lee. Inspired by Chris Columbus, John Carpenter, Joe Lynch, and Edgar Wright – Black Friday offers a horror comedy romp to the Thanksgiving season. With a lively performance from Evil Dead star Bruce Campbell, Black Friday will be sure to entertain.

You thought it was just a story. Directed by Stephen Kay and written by Juliet Snowden as well as Stiles White, Boogeyman follows a young man who tries to deal with the childhood terror that has never stopped haunting him. The film stars Barry Watson, Emily Deschanel, and Lucy Lawless. This horror film takes place on Thanksgiving and it is up to our main protagonist to dig up his childhood trauma to make it through this fearful endeavor.

The family just got a little stranger. Directed by Barry Sonnenfeld and written by Paul Rudnick, Addams Family Values follows the Addams Family trying to rescue their beloved Uncle Fester from his gold-digging new love, a black widow named Debbie. The film stars Anjelica Huston, Raul Julia, and Christopher Lloyd. Besides the focus of the film surrounding themes of family, this horror-comedy features a hilariously dark Thanksgiving scene that steals the show. Definitely one of the best Thanksgiving movies on our list by far!

What happened is true, now the motion picture that’s just as real. Directed and written by Tobe Hooper with additional writing by Kim Henkel, The Texas Chainsaw Massacre follows five friends who head out to rural Texas to visit the grave of a grandfather. On the way they stumble across what appears to be a deserted house, only to discover something sinister within. Something armed with a chainsaw. The film stars Marilyn Burns, Edwin Neal, and Allen Danziger.

What is Thanksgiving without your crazy family bickering at the dinner table as you try to find any way out? Though the film doesn’t take place on Thanksgiving, its main sadistic antagonists line up perfectly with the anxieties that come with the season of giving. A must-watch when it comes to Thanksgiving horror!

What Are Your Favorite Thanksgiving Horror Movies?

We hope you’ve discovered some new bloody good choices to bring to your family this Thanksgiving! Let us know some of your favorite Thanksgiving horror films on social media today!