Blank Generation: Nihilism in Return of the Living Dead

Return of the Living Dead seems to be commenting on previous generations when it comes to power. They act in ways that will only benefit them in the short term meanwhile creating problems for young people. 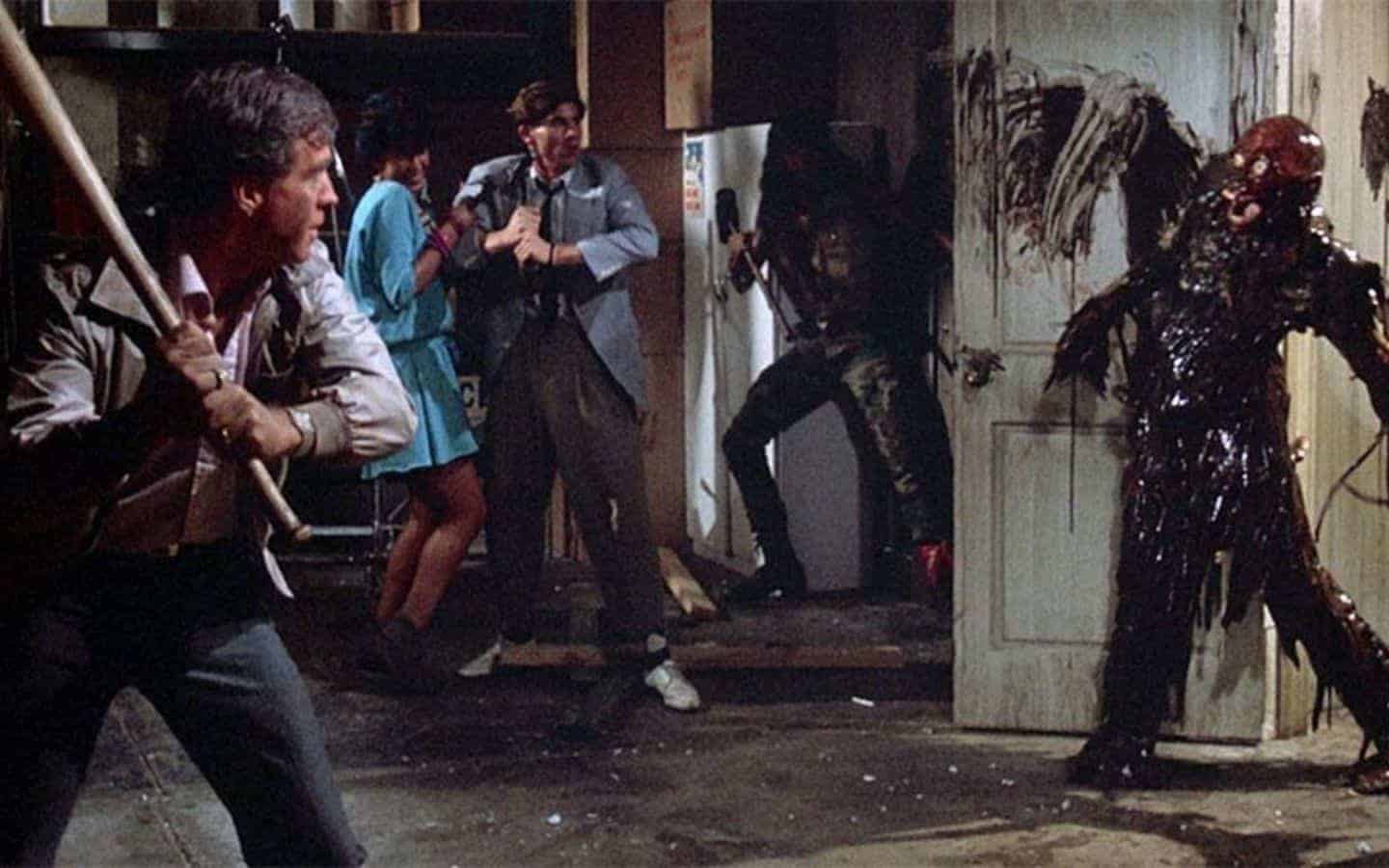 Return of the Living Dead seems to be making a statement on how the previous generation, the people in power, are acting in ways that will benefit them in the short term but are creating problems that young people will encounter in the future, problems they will simply be expected to survive. Or not.

I will preface this by saying no director in the horror genre has ever had their finger on the pulse of American social issues quite like George A. Romero, which is masterfully displayed in his first three Living Dead films. As perfect as those flicks are, though, none of them capture the same youthful nihilism that Dan O’Bannon’s Return of the Living Dead does, and certainly not with the same brash attitude or humor of this quintessential classic of 80s horror.

Of course, horror fans are well acquainted with Return’s campy, wacky, and unbridled exhibition of genre parody, punk rock aesthetics, and gore. It’s one of those films with a reputation that baby horror fans seek out in their education, and for good reason since it is quite possibly the most entertaining popcorn horror film of the decade of neon and New Coke.

But, all the gags and laughs have this cynical, almost depressing undertone to them once you consider the circumstances through which the zombie menace is allowed to spread and how our punk teen group of heroes are drawn into and respond to this peril.

From Confrontational to Cynical

Authority figures—Adults and especially the military—are regarded far differently in genre films of the 1980s than in those of the decade that is easily the heyday of their cinematic portrayal, the 1950s.

Where genre films of the 50s painted American authorities as preservers and gatekeepers of the U.S., and our only hope of defeating whatever monster happened to be running amok, in the 80s, authority figures were often cast as villains, secondary antagonists on the road to defeating a slasher, the monster, or said entity.

This change in direction was initiated by the sometimes deeply depressing 60s horror films but perfected in the always confrontational ones of the 70s like Jaws—films that put the ordinary person in the role of hero in conflict with both the authorities and monsters. This is retained in genre films of the 80s, but the major difference lies in the heroes. While Chief Brody wages a righteous war against the shark and mayor in Jaws, the heroes of 80s horror are very often dropped into danger and seem to lack the same skills for solving and combating the issues at hand.

The young people in Return of the Living Dead are like caricatures of the American punk subculture that was in full swing at this time. Much like the punks in the cautionary exploitation film Class of 1984, they are depicted rather unrealistically, but, unlike that film, this is used for some good-natured teasing and to illustrate the disconnect and hopelessness prevalent amongst the youth of America in the 80s, especially under the guidance, protection, and govern of older authority figures, who are just as disconnected but also wholly and hilariously inept.

Nobody Has Any Brains

In Return, authority figures who are supposed to have more common sense than they do are responsible for the zombie horde that ensnares the young group of friends. Like Frank, the foreman of the Uneeda Medical Supply Warehouse, who spins a ghastly tale for the new hire, Frank, about how Night of the Living Dead was based on true events. Zombies were actually spawned by government experimentation with the Trioxin chemical, all of which was covered up, naturally. And, it just so happens the warehouse is home to the remaining Trioxin and the remains of a zombie.

So, the responsible thing to do would be to go down to the basement and show off these creepy curiosities, right? Well, yes, it’d probably be pretty cool to do just that, but you probably shouldn’t. But, Frank does just that, and he definitely should not have since he thought it was a good idea to slap the side of a nearly twenty year old metal container that likely hadn’t been maintained since it arrived on his doorstep. The leak Frank causes is where the problems begin.

Frank proves to be completely ineffectual when he and Freddy come face to face with an angry human cadaver reanimated by the Trioxin leak in one of the zaniest and hysterical sequences you’ll find in horror. He cries and moans through the ordeal and requires the help of warehouse owner, Burt, to help dismantle the living corpse.

Throughout all of this, no one questions the physical degeneration of young Freddy, obviously caused by the Trioxin, because the matter at hand is covering this ordeal up. That’s why Burt the pieces of the cadaver brought to Ernie at the local mortuary for incineration, since that would be a quick and quiet way of disposal. No, Freddy’s condition is ignored as the adults take the easiest course of action and burn the contaminated corpse’s body, releasing the Trioxin fumes into the air where they will contaminate and reanimate the denizens of a nearby cemetery.

What is an easy fix for Burt and Ernie is really just another fumble, one that now also puts Freddy’s friends in mortal danger. They had already left their graveyard hangout to check up on Freddy, only to run right into Tarman, the infamous zombie that was allowed to rise from its metal tomb by Frank and take the life of Suicide (Mark Venturini). The rest of the group runs for their lives but have little hope since the dead have risen by Burt and Ernie’s idiotic design.

This trend fuels the hijinks for the rest of the film. The adults are no help in effectively fighting the zombies, the police are no match for them, and, in the finale, the government and military steal a move from Burt and Ernie’s playbook and literally burn it all to the ground. Any survivors lucky enough to survive the zombies are wiped out, but so are the zombies. Quick and easy, except their solution spreads the infection further than they could imagine.

Plight of the Punks

Rather unexpectedly, Dan O’Bannon seems to be making a statement on how the previous generation, the people in power, are acting in ways that will benefit them in the short term but are creating problems that young people will encounter in the future, problems they will simply be expected to survive. Or not. The previous generation does not care as long as they themselves are alright.

Freddy and his friends did not ask for trouble or seek it out, and they do not have the ability to take control and conquer when the zombies are dropped in their lap. How could they? They can only react as the problem has manifested and mutated beyond the point of reasonable resistance by the time they are forced into action. In fact, the problem of the zombies was created before they were ever born judging from the exposition provided by Frank of zombies and Trioxin in the 60s.

Therein lies the brilliance of the humor in the Return of the Living Dead. These unfortunate events occurring at such a relentless pace as they do would typically make for a brutal film, but the humor undercuts that. The humor distances the audience from the foolishness of the authority figures because the film’s young punk heroes are distant themselves. They know that no one cares about them.

They hang around cemeteries until their friend is off work so they can hang out some more. The character, Trash (Linnea Quigley), monologues about the sensuality of dying and dances naked on a grave.

If any of this comes off as cartoony, it is because O’Bannon is making a cynical joke at us. It’s like he’s telling the audience, “hey, see how quirky these damn kids are? No hope for them, eh?” And, that’s the sick joke. There is no hope. Their outlook is bleak, and these characters know it, so they go beyond convention to differentiate themselves, to position themselves in a world controlled by people who are mucking things up for their future, not the present. In a way, it’s like the dark, surreal millennial humor typical to that generation. Perhaps, Return of the Living Dead was a precursor to that?

Of course, O’Bannon’s script is full of these jokes, and the other big one he makes is the one that would make Frank, Burt, and Ernie most uncomfortable. “What if they people mucking everything up didn’t have the luxury of handing their toxicity off to the next generation? What if things went south in the here and now?” So, not only do the punks have to fight the zombies, but so do the adults. The director makes sure to let everybody be in on the fun and share in the mayhem, and that’s the authority’s worst nightmare.