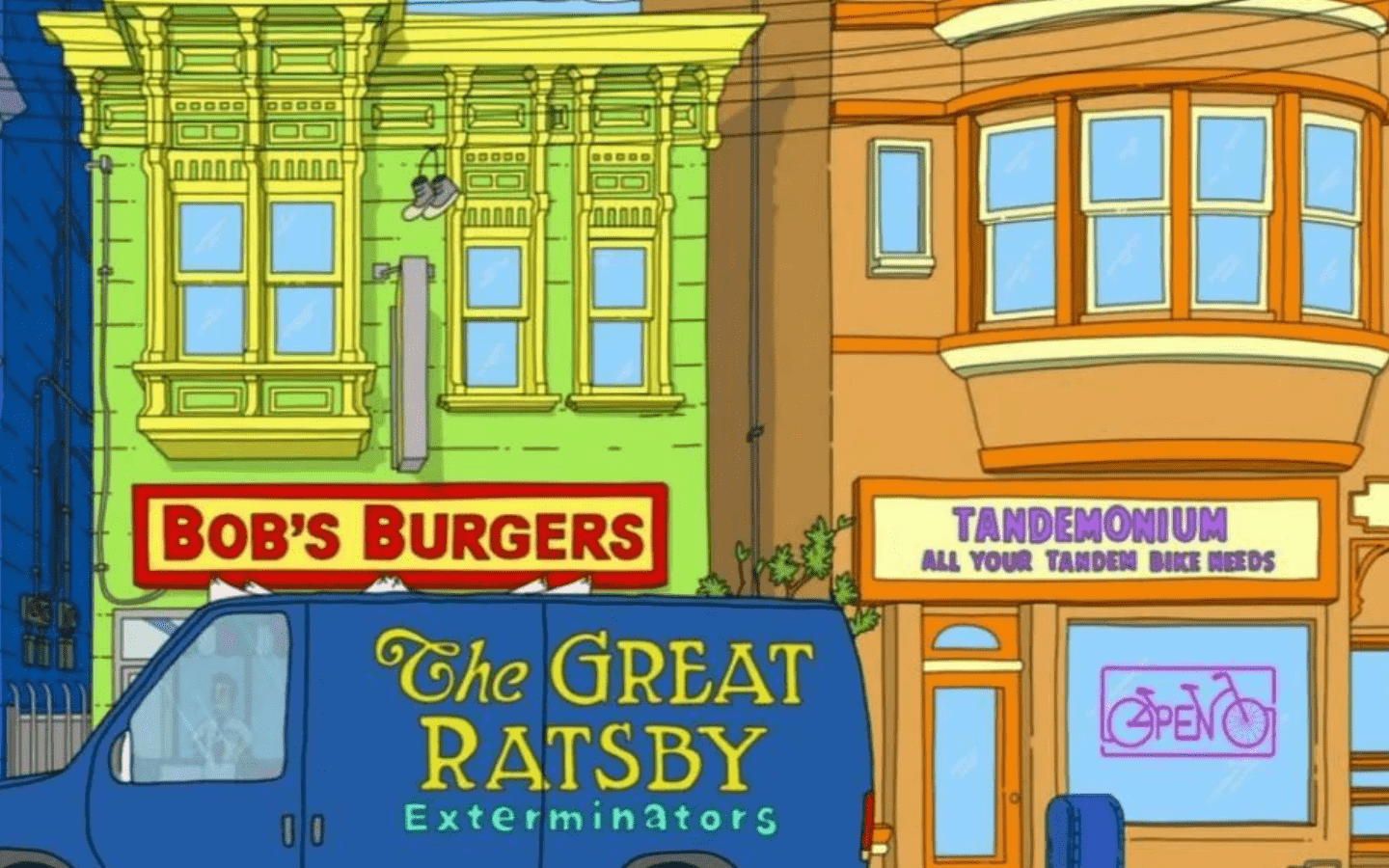 I have been painstakingly watching the first 30 seconds of every Bob’s Burgers episode to bring you all of the store next door gags. My Hulu account has been out of breath for the past three days. Regardless, here is every Bob’s Burgers season 4 theme song gag explained. Let me know your favorites on social media!

Note: Season 4 Episodes 21 and 22 are a two-parter called ‘Wharf Horse’ and ‘World Wharf II’. These episodes don’t have the regular opening theme song with the store next door.

Tandemonium: All Your Tandem Bike Needs

This store is a mash-up of the words ‘pandemonium’ and ‘tandem’. These tandem bikes are sure to make a lot of chaos. It is a subtle joke, but a good one. I also love the tandem bike neon sign in the window. The animators on Bob’s Burgers do an excellent job of making these stylized neon signs.

The store name is most likely referring to the yearly news stories/urban legends surrounding people putting dangerous objects into Halloween candy. Another thing I love about this store is that the sign is in candy corn colors.

I feel like a sign store would be hard enough to keep open, let alone one that only sells cautionary signs. Home Depot and Lowe’s have an entire sign aisel. How is this store staying in business?

This store is a reference to the phrase ‘A wolf in sheep’s clothing.’ This typically refers to a person who seems nice on the surface but is actually evil. However, in this case, it is just referring to pet clothes.

This is most definitely an homage to the 1964 Stanley Kubrick film ‘Dr. Strangelove or: How I Learned To Stop Worrying and Love the Bomb.” This film stars Peter Sellers, George C. Scott, and Sterling Hayden. Dr. Strangelove is an offbeat comedy about the crazy things that could have happened during The Cold War.

I don’t know who Betty is, but I wouldn’t expect someone with that name to be selling machetes.

This is a smart joke. ‘Yadda Yadda Yadda’ is a Yiddish phrase. It is typically used the same way someone would say ‘so on and so forth’ when they don’t want to keep explaining something. At the same time, dadaism is a type of art that was created as a response to the violence of World War I, and helped create the trend of surrealist artwork.

Egg Nog who? How dare this sign not finish a perfectly good knock-knock joke? You know what? I hope this store goes out of business by the next episode.

Tankin’ It To The Streets: Tank Top Shop

This storefront is a reference to the classic Doobie Brothers’ song ‘Takin’ It To The Streets.’ The song was released in 1976 and was track two on their album of the same name. If there is one thing that reminds me of tank tops, it’s The Doobie Brothers. Just kidding, I don’t think this store will last long.

This is a reference to the comedy club chain ‘Catch A Rising Star’. I am not sure how animals would take to the ‘yes, and’ nature of improv, but I would love to see it. This comedy club also has a sign on the door that says ‘No Dogs’.

Fire Distinguishers: Put Out Your Fire With Flair

Fire-fighting style is something that is very overlooked in our society. Sometimes you have to put out your house fire in style. Personally, I would love a leopard print fire extinguisher.

This store’s name is making a joke out of the legal phrase ‘guilty as charged’. This storefront also has a really cool window sign. It is a basic “Open” sign but made out of quilt patches.

I don’t get this one. What exactly is an indoor outhouse? Isn’t that just a bathroom? I have a feeling that is the joke here and it is meant to be absurd.

This is a pun based on ‘millionaires’ and ‘Brazilian Waxes’, a popular form of pubic hair removal. This store decided that its best strategy was to offer monetary services while removing people’s pubic hair? Did anyone realize how dirty money is? I hope this company is clean and safe.

In Bob’s Burgers, this store decided to base its marketing around selling skincare products to short people. That is quite a niche audience if I ever saw one.

I don’t want to buy tires from someone who has diarrhea. Or wait…do the tires themselves have diarrhea? I would never get the smell out of my car. To make matters worse, there is a sign in the window stating that the store is having an ‘Explosive Sale’. I’m not going anywhere near this place.

Get A Loom You Two! Couples Weaving

This is a reference to the common phrase ‘Get a room, you two!’ This phrase is generally used when a couple is showing too many public displays of affection, or displaying a lot of sexual tension.

This is most likely a reference to the song “A Bicycle Built For Two” by Nat King Cole. Bob’s Burgers really seems to love its tandem bike references. Also, what would a tandem unicycle look like? Where do the seats go? It must be impossible to keep balanced.

This is a reference to the classic television series The Twilight Zone. The program was an anthology-style series that was based on science fiction and horror. The original series ran from 1959 to 1964 and was created by Rod Serling.

What Are Your Favorite Bob’s Burgers Season 4 Store Gags?

We hope you enjoyed our list of every Bob’s Burgers season 4 store gags. Which one is your favorite? Let us know on social media!