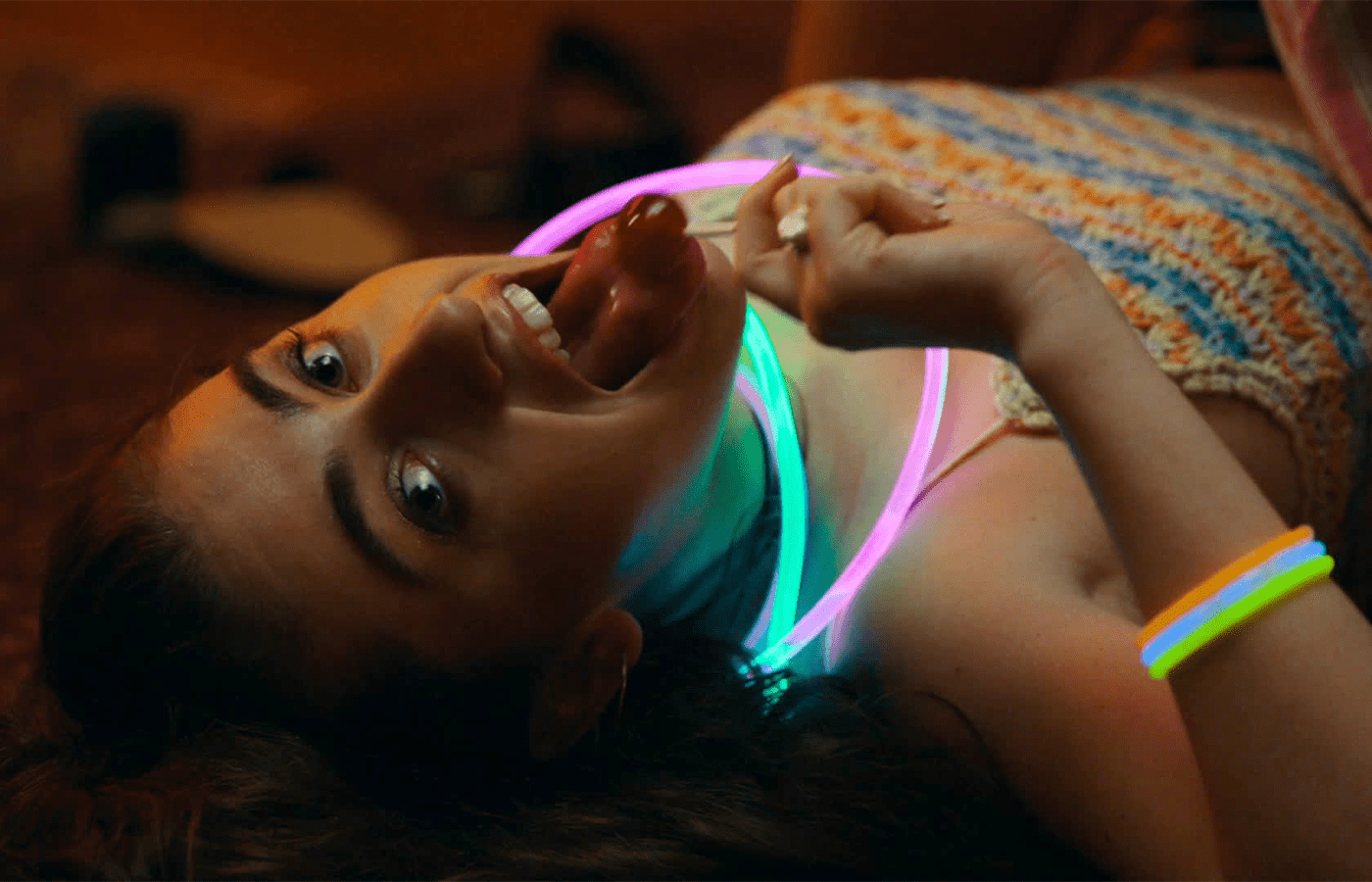 From Dutch actor, writer, and director Halina Reijn comes the whodunit of the Summer. Bodies Bodies Bodies (2022) is a fun subversion of the slasher subgenre while subtlely utilizing contemporary political culture and the popularity of therapy language to place a microscope on those terminally plugged into social media. The film tackles some pretty modern frustrations, ones that resonate with me on a daily.

Written by Sarah DeLappe, and produced by 2AM and A24, the film follows a group of rich 20-somethings having a hurricane party at a remote family mansion. A party game turns deadly in this fresh and funny look at backstabbing, fake friends, and one party gone very, very wrong. Bodies Bodies Bodies stars Amandla Stenberg, Maria Bakalova, Rachel Sennott, Chase Sui Wonders, Pete Davidson, Myha’la Herrold, and Lee Pace.

Bodies Bodies Bodies sets up the genre expectations for a horror movie pretty early on. Young adults doing drugs, having sex, a big spooky house in the middle of nowhere, a storm that traps them, no signal, no car, and a killer lurking within the shadows. Sounds familiar right? The marketing for the film didn’t reveal much besides a murder mystery at a house party gone wrong. Aside from the cast and production studio, I probably would have skipped this film – but I’m glad I didn’t.

The film’s marketing tagline was a brilliant little look into what we were getting into. “This is not a safe space” is what’s riddled across the posters for this film and on initiation, it’s a subversive tagline. A “safe space” has become the hot go-to phrase to describe a place intended to be free of bias, conflict, criticism, or potentially threatening actions, ideas, or conversations. So on one hand it plays with the threat of course of being killed but more so leans into the socio-emotional implications that come with it. What I would find out later is that this tagline perfectly encapsulates the themes of Bodies Bodies Bodies.

In all honesty, the way everything unfolds reminds me of The Twilight Zone episode The Monsters Are Due on Maple Street. In it, a neighborhood is threatened with the idea of aliens from another world invading their quaint suburban paradise and in turn, everyone tears one another apart. When it is all said and done, what’s truly happened is that man’s paranoia had gotten the best of them. It is man’s anxiety that undid them, not a monster. In the film, once Greg goes to sleep it’s not long after that everyone finds David with a slit throat bleeding out in the rain. This is the inciting incident that something is awry.

That’s just the tip of the social iceberg. We’re introduced to a group of friends that for all intents and purposes dislike one another, maybe even hate each other but have remained friends because of proximity. They’re all narcissists and enablers that truly bring out the worst in one another but put on a guise of being civil because… well their friends right? Already that’s a lot to unpack. I left seeing this film with a group of close friends and it shook us because we’ve known these people in our own lives.

Once David’s body is found, all of our characters unpack a myriad of therapy language to manipulate the situation at hand. By calling one another narcissists, gaslighters, and enablers they move the blame to someone else. It becomes a test of purity and ego, and the loser is the one who is perceived to do the most socially wrong. I think this is exactly what the film is trying to hit home in a lot of varying ways. Bodies Bodies Bodies put us in the shoes of Bee and so from the get-go we get an outsider’s look into these very broken relationships. But though Bee may be the most “innocent” I think it’s her motivation of wanting to be accepted that becomes the throughline for every character.

Bee wants to be accepted for who she truly is. She like many of our other characters put on this facade of a person but eventually is confronted. Bee must either die or let go of her mask and own up to her mistakes. In the end, as she tries to quietly escape the bloody party mansion, she is finally and begrudgingly found by her new girlfriend Sophie. Bee was vulnerable with Sophie right before she is told that Sophie could have potentially cheated on her. It is then that a seed of doubt is planted in Bee’s mind. They struggle over a phone in search of the truth. Sophie claws and fights to protect herself from yet another “betrayal”.

Bee gets a hold of it and it’s not Sophie’s phone but David’s. They unlock the phone and find out that David accidentally killed himself. In a grand twist of events, it wasn’t a secret murderer that killed everyone but it was themselves. Rather than apologizing, being vulnerable, and owning up to their mistakes every claim of wrongdoing is misplaced onto someone else. But because it was voiced with therapy language that our modern culture is so familiar with, everyone feels justified in their behavior. Everyone is vilified and nothing is fixed.

Bodies Bodies Bodies is a simple story but because of its use of popular contemporary language, social context, and innate bias, I believe it elevates the material in a very timely way. Very often you can go to your social media of choice and watch others put people under a microscope (despite not knowing a single thing about them) to find any sliver of wrongdoing or perceived injustice. This is just how the vast majority operate online now without any second thought that they could be the problem. The behavior continues without any type of humility or tact. What happens is we engage in this overnight activism when in reality we’re no better than the people on Maple Street.

RELATED: How To Watch The Scream Movies In Order