The Book of Boba Fett Season One Review 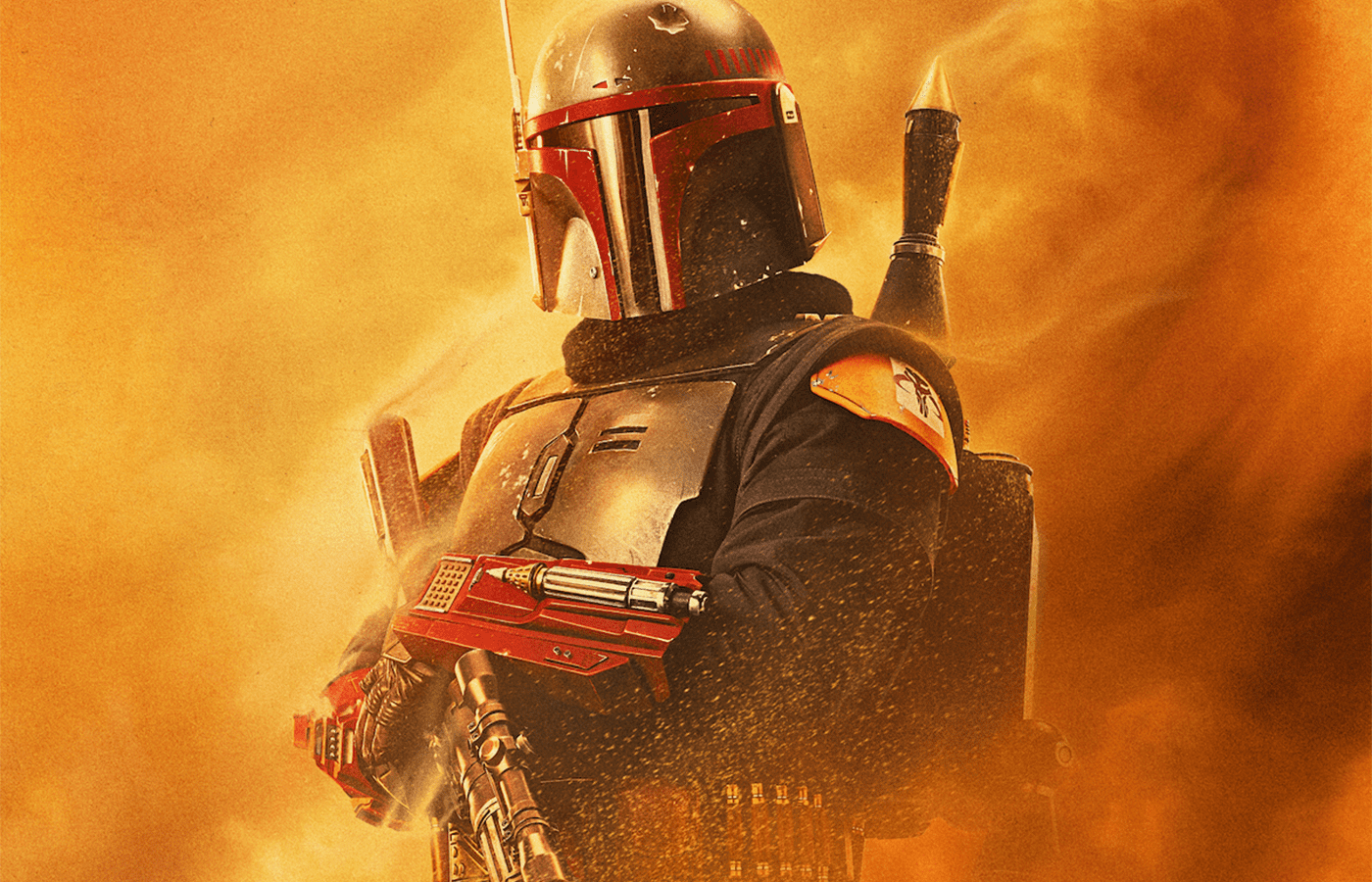 The Book of Boba Fett Season One Review

Even before the debut of Empire Strikes Back in 1980, Boba Fett has been an iconic and enigmatic figure in the wider pop culture consensus of Star Wars. From his early debut in the much-maligned Holiday Special, with his debut being considered by many the only good part of it, and a drop of early action figures. It was the already present mystery around him resulting from these early appearances that only grew with his lack of dialogue and never removed helmet in Empire Strikes Back and Return of The Jedi that made him immensely popular with the early Star Wars fandom.

The character’s popularity would grow so much that an entire culture, the Mandalorians, would become cemented in the original ‘Expanded Universe’ of Star Wars comics, games, and novels all because of his one design. As time went on, the Mandalorians themselves would grow beyond their original inspiration, with Boba Fett himself becoming more and more divisive of a character as more would be revealed, retconned, and debated.

RELATED: Star Wars and the Art of Subtle Worldbuilding

The major debate was he cool, or was he a wimp with his defeat in Return of The Jedi? This example is perhaps the most contentious besides his backstory retcon from the Prequel Trilogy. That and the mentioned possibility of his presence as a Mandalorian, the culture he had inspired, is no longer a thing in Disney’s canon.

The Return of Boba Fett

This all led up to his appearance in The Mandalorian Season 2 where his surprise cameo at the end of Episode 1 took many people by surprise. Even if speculation of Disney canon and by extension, the show using the EU’s lore of Boba Fett’s survival had been rampant. This only increased once Boba Fett joined Din Djarin’s, titular Mandalorian ranks as an ally with his easy victory against a legion of Stormtroopers and reaffirmation of his status as a Mandalorian renewing fan excitement for the character.

It was on the back of this newfound love for the character that in a post-credits scene during the finale for The Mandalorian Season 2 that a new spin-off centering on him and his newfound second-in-command Fennec Shand would be announced. That show, being The Book of Boba Fett, would have Temuera Morrison reprise his role of Boba Fett from amongst many other works, along with Ming Na-Wen as co-lead as the aforementioned Fennec.

RELATED: Star Wars: The Story Of How Too Much Of A Good Thing Turned Out Bad

Unpacking Episodes 1-4 of The Book of Boba Fett

It must be worth mentioning that I was a fan of this first half. I know plenty of other Star Wars fans were not, and I think I understand why. Episodes 1-4 of The Book of Boba Fett pick up right where the post-credits scene announcement left off, with Boba Fett having taken command of Tatooine’s crime from Bib Fortuna, Jabba’s main Twi’lek henchman in Return of The Jedi, and trying to affirm his position in power. This was about what everyone expected. What was not expected however, were flashbacks interlaced in the episodes explaining how Boba Fett survived the Sarlacc Pit.

It developed a new changed attitude that had already started being shown in Episode 2 of The Mandalorian. Boba Fett was now a much more merciful honorable character, one familiar to fans of the EU’s Boba Fett, but not what had been shown in the ruthless murderer of Disney canon, Marvel comics, or even The Clone Wars. This is where the show’s problems emerge.

In a show whose episodes ranged from 25 to 40 minutes without credits, it is not a lot of time for a live-action genre drama that only has seven episodes in a season. Because of this, these initial four episodes were heavily divided between these two plotlines. The modern-day Boba Fett crime lord plot and the flashbacks explain how Boba Fett changed. Both have the potential to be their own shows, and as a result, neither is fully fleshed out to their potential. Many would say the flashbacks ended up being stronger, and I would agree.

Its exploration of the Tusken Raiders, something which had already begun in The Mandalorian much like Boba Fett’s character change, was very enjoyable. The continued depth given to a species that had only been portrayed in one way outside of some notable exceptions in Star Wars, such as Knights of The Old Republic and A’Sharad’Hett is commendable.

Because of this, the crime lord plot suffered. Many times it would feel like it wasn’t going anywhere and felt aimless or small-scale beyond a vague notion of fighting the Pyke Syndicate for control of Tatooine, something which I figured would get resolved once the flashbacks ended and the show would fully devote itself to that plot. I was very wrong.

Unpacking Episodes 5-7 of The Book of Boba Fett

The biggest issue I feel with The Book of Boba Fett lay squarely in the laps of Episodes 5 and 6, and that is how Boba Fett himself doesn’t appear in Episode 5 at all and only appears for two minutes in Episode 6. Of a show meant to be about him, with his name in the title.

Now, who is the main star of Episodes 5 and 6 you might ask? Well, for Episode 5 that’s… Din Djarin of The Mandalorian, a character who had already had two seasons worth of exploring and fleshing out, with this new focus only being set up at the very end of Episode 4 when Boba Fett and Fennec Shand talk about needing help to fight the aforementioned vague threat of the Pykes as Din’s theme plays.

There is a certain irony in that what they created from Boba Fett would end up surpassing him. With Episode 5’s story of Din’s struggle with restoring the Mandalorian people being given precedence, a story which Boba Fett the original Mandalorian isn’t even a part of it seems.

This lack of focus was not a one-episode interlude as speculated, and hoped, by many but instead a sign of what the final two episodes would be to varying degrees. Episode 6 continued by only having Boba Fett briefly appear to greet Din, however, this only happened after Din went to go visit Grogu, perhaps better known as Baby Yoda, who is being trained by Luke Skywalker as his first student.

Now I’m sure anyone would wonder at this point what the relevance of this is to Boba Fett, and well that answer is… nothing. There is no relevance to Boba Fett. The episode is entirely focused on Din and Grogu’s struggles apart from each other, complete with multiple scenes with a CGI deepfake of Luke Skywalker with a computer-generated voice and an extended cameo from Dave Filoni’s favorite OC, Ahsoka Tano.

RELATED: Star Wars and Gender: The Galaxy Is Finally Female

Boba Fett’s realm of crime, bounty hunters, and yes even Mandalorians have little to nothing to do with the Jedi. So how come this was “forced” into what they titled his book? It is truly baffling and there are no simple answers as of the writing of this article.

Episode 6 tries to reroute itself by having some scenes of Cobb Vanth, the sheriff who had worn Boba Fett’s armor initially after it was stolen from him post-Sarlacc Pit. In his town, he’s the sheriff being recruited by Din to fight the Pykes which applies to the main story and is capped by the shocking appearance of fan-favorite bounty hunter Cad Bane making his live-action debut, although it feels too little too late. That leaves us with the finale and well with two episodes so divorced from the main story, it has to try to cram in a lot. This leaves the finale feeling rushed and inconsistent with how many plotlines it has.

The much-anticipated character of Cad Bane only has three scenes, with his main rivalry with Boba Fett hinging on literal unreleased episodes of The Clone Wars that only those who had been absolutely obsessive Star Wars fans who had tuned into/attended a specific panel at Star Wars Celebration 2017 or had read up on Wookieepedia would know about.

They contrast this with the reunion of Din and Grogu, a plot that has its own issues better served for its own article, that as mentioned, doesn’t have much if any relevance to Boba Fett whatsoever. The show ends with the Pyke Syndicate defeated after an extensive battle and Boba Fett ruling Tatooine fairly with Din and Grogu flying into space, the end. If that sounds underwhelming, well… it is.

Before I get into the final ultimate flaw of the show, I do want to discuss what I did like. Nothing in the show is the fault of the actors. Temuera Morrison is charismatic as usual with his performance of Boba Fett being just as good as it was in The Mandalorian Season 2, Ming Na-Wen is captivating as always, and many of the new cast, including a cameo from Danny Trejo as a Rancor trainer, was incredibly fun.

The practical effects work to bring creatures like a baby Rancor and characters like Krystantin, a Wookie bounty hunter from the Disney canon comics, it all looks incredible and deserves to be praised. The new theme for Boba from returning Mandalorian composer Ludwig Goransson is epic in scale and the show’s main OST by Joseph Shirley measures up. Robert Rodriguez’s direction, despite being criticized by some, I feel is full of personality and very much elevates what he was given and I feel all the directors on the show did their best with what they had.

I think, however, there is one core issue at the center of the Book of Boba Fett, and that is who is Boba Fett? This is the question that Book of Boba Fett should’ve been answering. Who is this character of mystery that so many have wondered about?

For many of the general audience, this would be their first time having this icon explored and unmasked since he was a child in Attack of The Clones, and that’s where it fails. There is only a surface-level exploration of who Boba Fett is. Yes, we get some of that with the Tusken Raider flashbacks, but not enough. How does Boba Fett feel about Mandalorians?

A people who have rejected him as shown by Bo Katan’s reaction in The Mandalorian Season 2 and Jango Fett, Boba’s father, being explicitly labeled a mere bounty hunter in The Clone Wars. It does not explore this either.

How does Boba Fett and everyone around him reconcile with his change in heart going from one who worked for the tyrannical Empire as mentioned by Cad Bane to protecting Tatooine? Barely addressed after this. That is the core of the issue. Book of Boba Fett is about everything else besides him. This is not The Book of Boba Fett, it’s merely Mandalorian Season 2.5.

Did You Enjoy The Book of Boba Fett Season One?

We hope you enjoyed our Book of Boba Fett Season one review. How did you like the series? Let us know on social media!