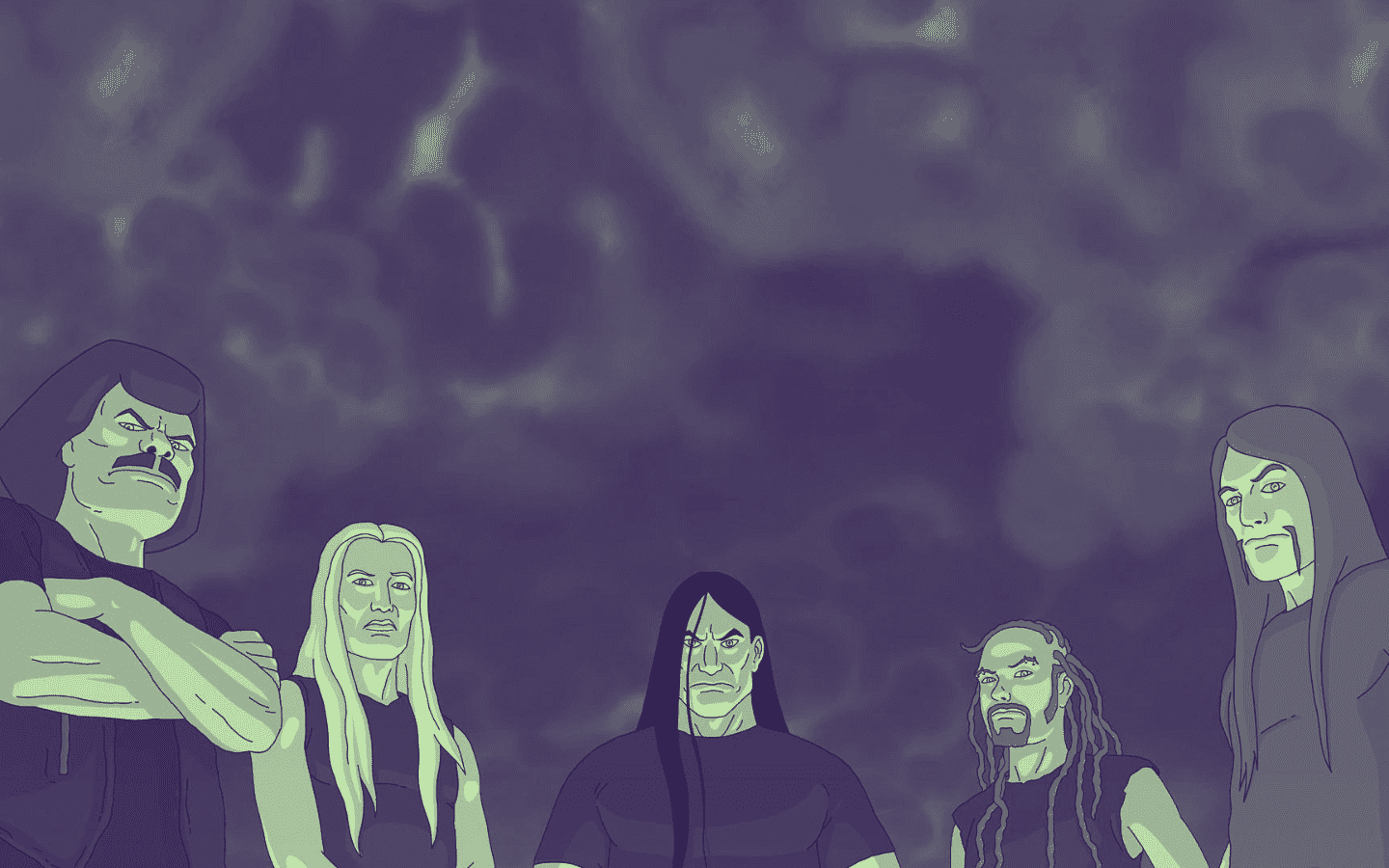 Metalocalypse is an Adult Swim animated series that was created by Brendon Small and Tommy Blacha. It ran on Cartoon Network for 61 episodes from 2006 to 2013. While Small and Blacha do many voices on the show, Metalocalypse also features the voice talents of Mark Hamill, Victor Brandt, and Malcolm McDowell. The series also features cameos from many heavy metal musicians.

Dethklok is the world’s biggest heavy metal band. They are so rich and powerful that their brand exceeds that of many countries. Also, they are all idiots. This leads to the band going on hilarious adventures and fighting against an Illuminati-type organization bent on bringing them down.

Nathan Explosion, voiced by Brendon Small, is the lead vocalist of Dethklok. The character is based on heavy metal icons George Fisher (Cannibal Corpse) and Peter Steele (Type O Negative).

Toki Wartooth, voiced by Tommy Blacha, is the rhythm guitar player for Dethklok. He is kind of the innocent and childish character on the show, similar to Meatwad in Aqua Teen Hunger Force. Who else remembers his happy Underwater Friends song?

William Murderface, voiced by Tommy Blacha, is the bass player for Dethklok. In my opinion, Murderface is one of the funniest characters on the show. He has very little regard for being socially appropriate. Also, we all wish we could play a slap bass solo with our penises. We are still waiting for Planet Piss to take off as a solo project.

Pickles, voiced by Brendon Small, is the drummer for Dethklok. He speaks with a hilarious Wisconsin accent that sets him apart from the rest of the band. I will never forget the Snakes N’ Barrels reunion show. Let’s hope Super Alabama Liquid Snake doesn’t actually exist.

Skwisgaar Skwigelf, voiced by Brendon Small, is the lead guitar player in Dethklok. He is a tall and thin man of Nordic descent. I don’t know this for sure, but I have always thought that the ‘elf’ in his last name is due to his similarities to elves in the fantasy genre. Skwisgaar is the most egotistical of all the band members as he holds the title of the world’s fastest guitar player.

Dr. Rockzo The Rock N’ Roll Clown (He Does Cocaine)

Dr. Rockzo, voiced by Tommy Blacha, is a crazy drug-addicted clown that annoys the members of Dethklok to no end. He is also constantly bragging about how he does cocaine. My favorite scene (and one of his first) is when he fart-inflates a balloon guitar and pops it in Murderface’s face. I can’t imagine that it smells great.

Facebones is an animated (in universe) character that is based on Dethklok’s logo. He is used as an animated host in Dethklok-based media. I love Facebones’ personality. He has a bright and cheery tone which juxtaposes well with his brutal appearance. Let us not forget that he is the mascot for a metal band.

Charles Foster Offdensen, voiced by Brendan Small, is Dethklok’s manager. He is a very serious ‘corporate suit’ kind of character. However, he knows a lot more about the world of Metalocalypse than he lets on. One of the most intriguing parts of this show is learning more about the lore of Charles Offdensen. He is always full of surprises.

Mr. Salacia, voiced by Mark Hamill, is the head of The Tribunal that is trying to take down Dethklok. While Mr. Salacia is a man of few words, he is very important to the plot of the show. He is in charge of the actions The Tribunal takes against the band, though he usually tells his colleagues to wait and do nothing. Mr. Salacia is one of the most mysterious characters in the series and adds to a lot of the intrigue found in the show’s lore.

Dick Knubbler, voiced by Brendon Small, is Dethklok’s producer and audio engineer. He has a vibe of the sleazy old-school music producers that you see in movies. He also has awesome robot eyes that he got after running from a mutant seahorse. Yeah, I can’t make this stuff up either. Knubbler adds a bit of bright comedy to this overall dark show, especially when he introduces the new water-based method of music production.

Who Are Your Favorite Metalocalypse Characters?

We hope you enjoyed the list of our favorite Metalocalypse characters. Did we miss any of your favorites? Let us know on social media!