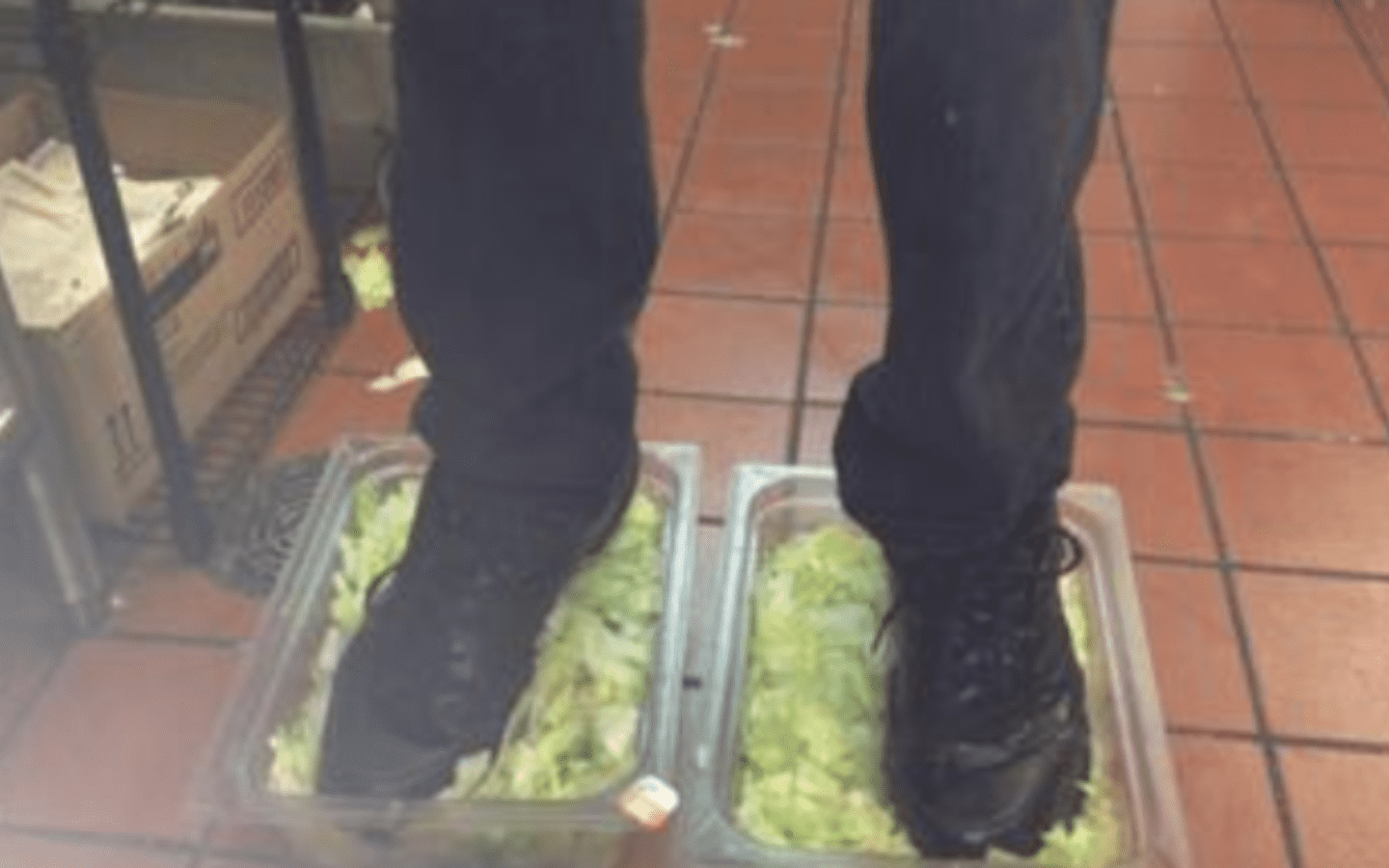 I worked at Burger King throughout most of high school and early college. While I never put my feet in the lettuce, I saw some of my coworkers do some pretty nasty things. It got so bad that I would only eat there if I cooked and prepared the food myself. It was against the rules, but I would rather get fired than eat food prepared by my crazy coworkers.

The Burger King Foot Lettuce Scandal starts in 2012. An anonymous poster on 4Chan posted a picture with the caption ‘This is the lettuce you eat at Burger King.’ The image was a picture of a Burger King employee standing in two bins of shredded lettuce.

Honestly, this is a pretty tame joke, especially when it comes to the stuff you see on 4Chan. However, this lettuce should most definitely not be served to customers. As an ex-Burger King employee, I can tell you that the non-slip shoes you wear at work get super nasty very quickly.

I don’t want any of that filth near my mouth or my food. It is bad enough that those shoes are on the floor a few feet away from the table where my food is made.

When it comes to the internet, there is no such thing as being truly anonymous. Your data is out there somewhere, waiting for others to find it. Commenters on this 4Chan thread were able to figure out who the person was.

The EXIF data on the photo had a location tag of Mayfield Heights, Ohio. For those who don’t know, EXIF is a standardized file format for pictures. It also contains metadata that provides details about the image.

Other 4Chan users began contacting local news stations and calling around to try and find the poster. They were to eventually get the attention of the manager at the restaurant, who quickly fired the employee.

It was at least nice to see that the manager cared about the quality of the food (at least in this circumstance). That wasn’t the experience I had when working at Burger King. That said, the manager could have only cared because of the publicity attached to the situation.

After this saga was completed, the Burger King Foot Lettuce Scandal became another internet legend. It is often discussed when talking about good things 4Chan has done as a community. It also tends to get brought up on many internet-based iceberg charts for weird internet activities.

The moral of the story, for all of you mischievous people out there, is to make sure you are covering your tracks. There are a plethora of signals placed in the data you transmit through the internet, and much of this data can aid internet sleuths in tracking you down.

Also, for all you fast food lovers, make sure you visit establishments that have high regard for cleanliness. You never know what is going on behind the scenes at your favorite restaurant. I mean, we have all seen the Ryan Reynolds movie ‘Waiting…’, right? Jokes aside, be careful and make informed decisions about where you choose to eat.

What Do You Think About The Burger King Foot Lettuce Scandal?

We hope you enjoyed our breakdown of the Burger King Foot Lettuce scandal. Have you heard of this event before? Let us know your thoughts on social media!