Butcher, Baker, Nightmare Maker and the Horror of Homophobia

In a field of thrilling 80s horror flicks vying for our attention, Butcher, Baker, Nightmare Maker may not be the flashiest, but it may just be the smartest. 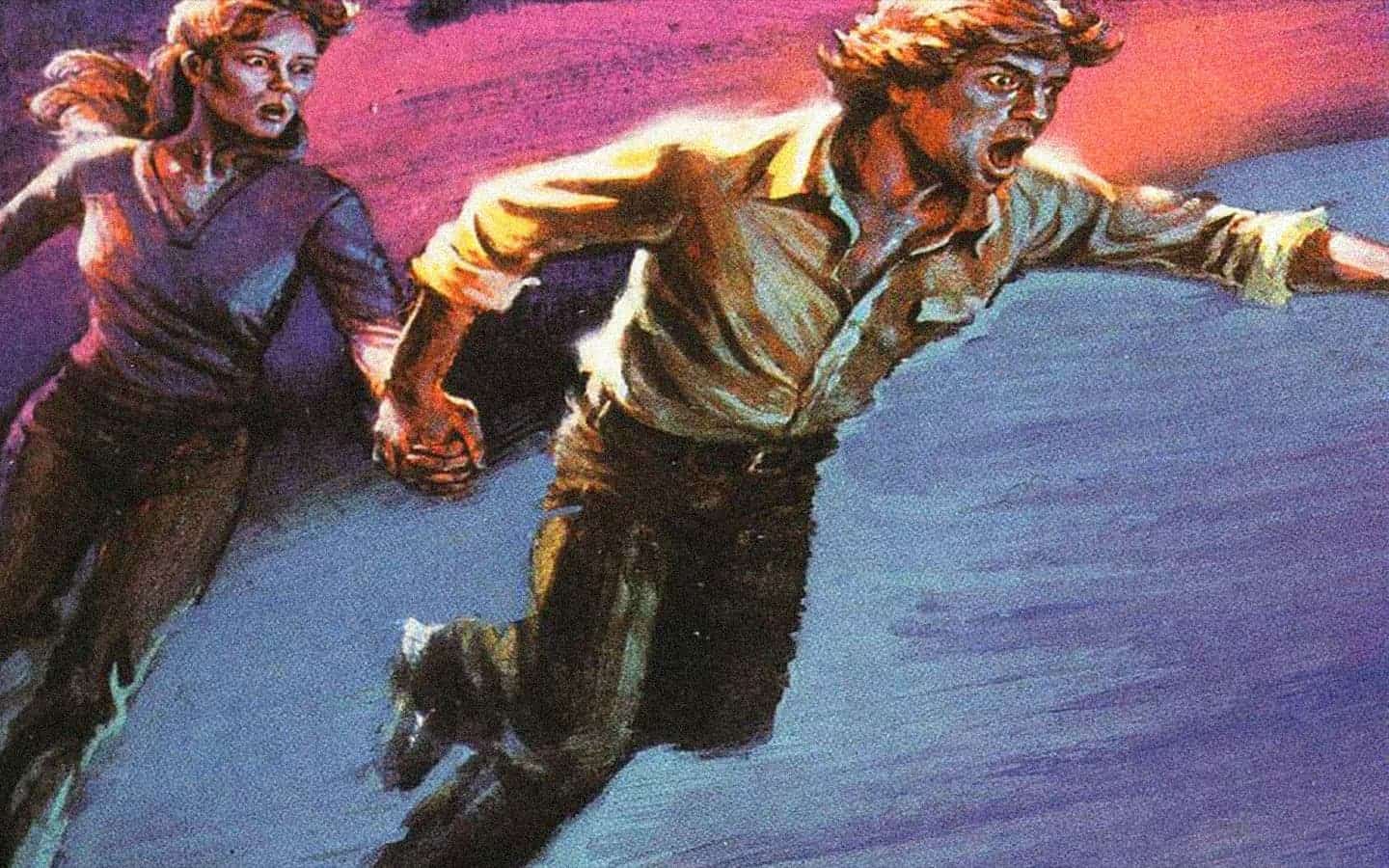 Also known as Night Warning during a re-release, Butcher, Baker, Nightmare Maker is an odd early 80s slasher that features Susan Tyrell as Chery, a woman who takes in her nephew, Billy after his parents die in a car accident that occurs in the film’s opening in a nicely done special effects sequence complete with a tree going through ol’ Dad’s head.

Years later, Billy has big plans to land a basketball scholarship and run off to college with his sweetheart. The only hitch in these plans is that Aunt Cheryl wants Billy all to herself. Yes, it seems Cheryl has eyes for her nephew, and mayhem ensues as she descends deeper into her mania, determining to manipulate the young man into sick sexual submission.

The plot is strange and sleazy in a quintessential drive-in sort of way, but the characters are richly defined by the performances of the cast, and the writing remains smart, even when dipping into the lunacy of the film’s premise, which should be attributed to the concise direction of William Asher, who executes a tremendous amount of control over the script with his concise, straightforward style.

He never allows the proceedings to devolve into camp, which it very well could have in the hands of another director given the queer elements that permeate the film, a significant departure from the handling of LGBTQ themes in horror at the time.

These themes first appear when Cheryl murders a man who rebuffs her advances, though she claims he tried to assault her, so she killed him in self-defense. However, Detective Joe Carlson doesn’t buy that story because he believes there is something more sinister at the heart of this tragedy: homosexuality.

Detective Carlson is played with an intimidating physical presence by Bo Svenson and is a deeply homophobic character obsessed with the narrative he has created that young Billy is in fact the killer.

He reaches this conclusion when he discovers that the deceased man was secretly involved with Billy’s basketball coach. So, naturally, Billy must also be gay and involved in a love triangle gone wrong. One is surprised that Carlson doesn’t hurt himself and walk with a limp for the rest of the film when he makes this stretch. But, once he does make that stretch, he turns the heat up on Billy, and his poor coach, in a frightening display of pure hatred.

He torments and berates Billy, always being sure to stand over the boy domineeringly, liberally using the f-slur like a slap in the face, and even threatening the coach with a lynching in a fruitless campaign to humiliate the poor boy into confessing that he is both gay and a killer, and, one is never quite sure which is more important to the detective.

Even as the evidence mounts against Aunt Cheryl, Carlson refuses to give up his theory. His misguided determination is unwavering, and the audience is left with our disgust over this character’s bigotry and disbelief over his incompetence.

This detective is not a complex character, but he isn’t meant to be. In a film where Susan Tyrell chews the scenery and makes our skin crawl every time she appears, Detective Carlson functions as a personification of the rampant homophobia prevalent in small-town America. His textbook b-movie villain unlikability creates a level of sympathy for queer people that was virtually unheard of in the American horror film up to this point.

In this respect, Detective Carlson also serves a similar purpose to Aunt Cheryl. They are both imposing, hateful characters who are positioned in the film to inspire outrage from the audience like heels in a pro wrestling match. They keep us engaged with the story as it progresses to its conclusion. It’s marvelous how this film so masterfully absorbs and commands its audience. It’s almost as though we are a part of the cast itself.

Throughout Detective Carlson’s cruel campaign, there remains the question of Billy’s sexuality. True, there is a softness to Billy, which is, perhaps, the only time the film offers a stereotype to support a gay theme, but what is really telling is how various characters interact with Billy after they hear of the detective’s concerns.

For example, Billy’s girlfriend, Julia, seems to have her doubts about him, especially after Carlson interrogates her about the young couple’s sex life. Julia voices her concerns to Billy gently yet pressing like she suspects or possibly knows something, as people close to people in the closet often do, and wants to bring out the truth.

Cheryl’s response is possibly the most ludicrous, though. She confronts Billy with Detective Carlson’s theory over dinner, demanding to know if he is gay or not and expressing her disgust with the homosexual lifestyle, which is laughable considering she touches and fusses with Billy in a previous scene, even, quite literally, clawing and meowing at the young boy in bed like a cat in heat. Cheryl’s comfort is ultimately the viewer’s discomfort.

Many retrospective reviews of Butcher, Baker, Nightmare Maker single out Susan Tyrell’s performance as being the film’s biggest achievement, and it’s hard to argue with that assessment. Cheryl is a complicated character, one that is peculiar to the slasher genre.

She is an archetype that would typically be found in a “horror hag” film of the 60s, but the damage and danger of her psyche and sexuality are at home amongst other psycho-sexual slashers such as ones seen in Don’t Go into the House or The Toolbox Murders as Tyrell certainly portrays Cheryl with the fragility of a fractured mirror—broken, with only a matter of time before she completely shatters and cuts someone bad.

In the context of queerness in relation to Billy, Cheryl reads like a classic case of parental narcissism. She is irrationally possessive of Billy, seeing him only as a fulfillment of her desires, and is threatened by his ambitions to be independent. She justifies her abuse as normal because, in her mind, it adheres to the heteronormative responsibilities of Billy, yet she falls to pieces at the thought of losing that control. For Cheryl, it does not matter how Billy really feels because she determines he must be straight for her. Her disapproval of Billy possibly being gay, then, reflects the selfishness many parents display when first encountering the issue of their children being queer, only taken to the extreme, of course.

This is why scenes wherein Cheryl and Billy are alone together in their home evoke feelings of imprisonment. In contrast to exterior shots and scenes taking place at the high school, for example, where constant action is layered beneath kinetic physical activity or sharp dialogue, creating space and movement, scenes between Cheryl and Billy are stagnant and eerily quiet, with shots set up to be stationary and tightly framed on the two. The scene composition not only forces the attention to Cheryl’s mania and helps build the tension but expresses the anxiety young queer kids feel in a home environment that is not conducive to their growth or supportive of their identities.

Over the last decade, horror has enjoyed quite the renaissance, with the exhumation and restoration of cult gems from the past being a large part. However, Butcher, Baker, Nightmare Maker has never taken off in the horror fandom as others have. It has popped up from time to time, occasionally playing on cable in the 90s, and has seen limited home video releases. The film seems to drift in and out of public consciousness, and that likely lies with the fact that contemporary reviews were lukewarm or dismissive, and it has never garnered the same lurid reputation that other films of this vintage enjoy, so there is not as much demand for its canonization.

However, in a field of thrilling, nostalgic 80s horror flicks vying for our attention, Butcher, Baker, Nightmare Maker may not be the loudest or flashiest, but it may just be the smartest, as it explores LGBTQ themes with surprising progressiveness, presenting the anxieties and tribulations that people in this community face, humanizing rather than villainize them, instead of endeavoring to cast the overbearing and irrational personifications of heteronormative societal acceptance in that role.