Let’s revisit a tale that began with police negligence, overcrowded public housing and murderers who crawl into bathroom cabinets. This is the story of Ruthie Mae McCoy and what would inevitably become Candyman. 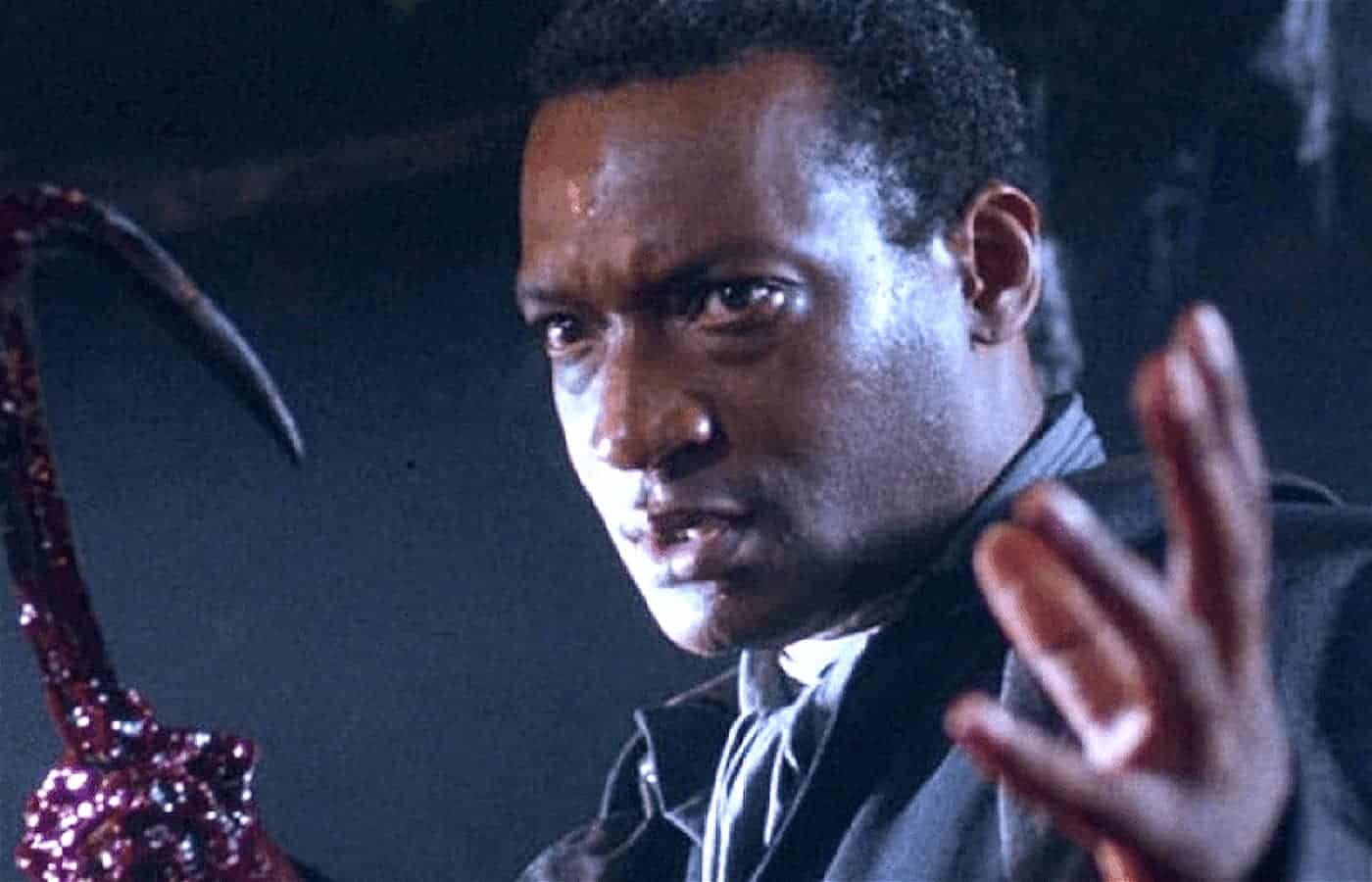 Let’s revisit a tale that began with police negligence, overcrowded public housing, and murderers who crawl into bathroom cabinets. This is the story of Ruthie Mae McCoy and what would inevitably become the horror movie classic – Candyman.

The 1992 release Candyman is nothing short of a modern horror classic. Following the urban legend of a hook-handed murderer that haunts the housing project known as Cabrini-Green, and one grad student’s valiant quest to chase the legend to the end, Candyman is finally due for its much-needed series reboot at the hands of director Nia Decosta and producer Jordan Peele.

But before the Candyman makes his long-awaited return to the screen hopefully later this year, let’s revisit the origins of a tale that began almost eighty years ago, and a history that includes police negligence, overcrowded public housing, and murderers crawling in through the bathroom cabinet.

The Origins of Cabrini Green

The Cabrini-Green housing project that contains the Candyman urban legend is very much a real place; designed in the late 1940s as a new means of affordable urban living, Cabrini-Green contained about fifteen-thousand residents during its first few years as a public housing unit.

Within the next couple of decades, however, Cabrini-Green and many others under the Chicago Housing Authority fell into disrepair when the city was unable to shell out the costs needed to maintain the developments for the units and the buildings. In the late 20th century, Cabrini and projects like it all over Chicago became a testament to the city’s callous neglect towards its poor residents and the stark differences between the classes in the city.

When the 1990s came, Chicago, and more specifically the area around the Cabrini-Green projects, saw a rise in middle-class white families taking up residence in the area, and with them, a new influx of money; public housing was torn down in a quest to make room for higher-income renters.

Spurred by the prospect of new money, the public discourse at the time centered around “welfare queens” and “urban poor”, and grants given to municipalities for tearing down high-rise public housing buildings and replacing them with more expensive smaller developments sometimes worth tens of millions of dollars. It was a fight against the city of Chicago versus the thousands of working-class families simply trying to stay afloat.

The battle took more than twenty years, but in 2010, the last resident of the original Cabrini-Green housing project was taken to court by the city when she refused to leave her high-rise home of twenty years and assigned a new unit in Chicago’s South Side neighborhood.

Arguably, the actual story of Candyman doesn’t necessarily begin with the Clive Barker short story The Forbidden, or the height of the occupancy of public housing in Chicago, but in 1987. In the high-rise, public housing buildings, referred to as ABLA Homes (short for Jane Addams Homes, Robert Brooks Homes, Loomis Courts, and Grace Abbott Homes) lived a 52-year-old woman named Ruthie Mae McCoy; known around the block as an ornery old lady with a mean streak and suffering from some mental illness that had her in and out of psychiatric centers. In the final few months of her life, Ruthie Mae was seemingly working her way out of the paranoia that so dutifully followed her.

Neighbors reported that she was more pleasant than ever before; reportedly, she’d been working with the psychiatric clinic in the neighborhood, she’d been going back to school and, most importantly, she was receiving a not-insignificant sum of money that she would hopefully save to find a way out of the high-rise projects to be closer to her family.

RELATED: Candyman – The Optics Of Gentrification

On April 22, 1987, Ruthie Mae put in a frantic 911 call, saying that someone was trying to break into her home; more specifically, they were coming in through her bathroom cabinet.

“They want to come through the bathroom,” McCoy reportedly said on the call, terrified. A confused dispatch sent a car, but for some reason did not report McCoy’s frantic call as a break-in; shortly after that, two more concerned residents reported hearing gunshot noises and screaming coming from the same vicinity, yet the police were hesitant to break in McCoy’s door on account that, if she were alive, they would have to deal with the possible repercussions of a lawsuit.

Two days passed before someone finally answered McCoy, and they managed to get into her home, but by then it was far too late. She’d been shot four times by the men who entered her bathroom, likely knowing that she was a single, old senile woman and therefore easy prey, and she’d died when a bullet sheared through her pulmonary vein. At that point, her body was already beginning to rot.

A victim of the “bathroom-break ins” of the 1980s, the Abbott project suffered from much of the cheap architecture that plagued these high-rise homes; in the housing projects of Chicago, it was more than possible to access your neighbor’s homes via the pipe chase. Mere feet in between one cabinet to another, although it wasn’t as simple as the 1992 Candyman movie made it look—take, for example, the scene where Helen slides her bathroom cabinet out of place and finds herself shoulder-deep in the neighboring apartment—reportedly, only a handful of nails that could be dislodged with ease stood in between one unit and another.

Many of the rooms had back to back medicine cabinets separated by absolutely nothing except for the pipe chase, for easy access to the plumbing, but it didn’t take long before people plagued by poverty and stricken with desperation would use it for other purposes.

Residents reported seeing figures darting out of their bathrooms, and out the front door, and noises in the bathroom of people trying to get in, to the point where some would position furniture outside their bathroom doors, or keep a bucket nearby so they didn’t have to go near that room at night. The harrowing story of the bathroom break-ins of 1987 was its own home-grown horror alone, but how exactly does this relate back to Candyman?

Steven Bogira, the author who wrote the in-depth piece covering the murder of Ruthie MaeMcCoy and the terror of the bathroom-breaks in’s in the Chicago newspaper The Reader (which I highly suggest that everyone read; it’s a very compelling story), actually got a call from American actor John Malkovich, shortly after the piece ran; he had wanted a movie adaptation of what was occurring in the Abbot Homes high-rise, supposedly to bring these issues to a bigger audience.

But the catch was that he requested a white reporter star as the individual investigating the medicine-cabinet killings, to resonate with a larger crowd. When Bogira expressed being uncomfortable about this change, he didn’t hear back from Malkovich again, reportedly—until Candyman hit theaters in 1992.

Malkovich has no credits on the movie release, but it’s not a far cry to suggest that he perhaps talked to the right people in the industry to weave in the thread of the bathroom horrors. Also worth noting that in the film, the first woman we hear of to die by the Candyman’s bloodied hook, and who is not taken seriously until they stumble upon her dead body, is a woman named Ruthie Jean.

In 1985, British horror author Clive Barker published his fifth volume of horror short stories, known as the Books of Blood; and brought to the world the story known as The Forbidden, the basis for the 1992 Candyman film.

The Forbidden centers around a familiar character—Grad student Helen Lyle, but this version of Lyle has her studying the graffiti of low-income neighborhoods and the art that is produced there, where she inadvertently stumbles upon the urban legend of a hook-handed killer that is non-discriminatory towards those he claims as his victims. Known in hushed whispers to terrified residents as the Candyman, locals placate him by leaving out candy mixed with bloody razor blades. While Tony Todd’s baritone delivery of “be my victim”, is iconic in itself, Barker provided the actual line.

And, where The Forbidden’s version of The Candyman legend is simply a waxy-looking, thin-lipped and red-eyed man, the film version of the Candyman, played by Tony Todd, chooses to make him the spirit of a black man killed by white mob justice for getting a white woman pregnant. Arguably, this was to drive home the racial tension in the United States, and perhaps to play on the ways that white supremacist society makes monsters into black men, especially after their deaths.

The upcoming teaser for DeCosta’s new Candyman film features a puppet version of the many ways in which the United States has provided the “origin stories”, so to speak, of potential urban legends, including the death of 14-year-old George Stinney Junior, convicted and sentenced to the electric chair at the hands of an all-white jury after just ten minutes of deliberation for supposedly killing two white girls. In a more contemporary example, police offer Darren Wilson made teenager Mike Brown into a thing of legends when he described the then 18-year-old as an “an angry-looking demon”.

As stated previously: Candyman is a horror masterpiece, and the way a story about an enigmatic, supernatural killer based in Britain traversed a thousand-mile terrain to cover topics like class disparities, white supremacism, and hood violence in the United States is nothing short of extraordinary. Reportedly, the new film will be taking place in a Cabrini-Green that has been radically altered by gentrification, the iconic high rise that inspired shows like Good Times, long since torn down and its residents displaced. Only time will tell what direction DeCosta and Peele take their modern Candyman, but what we know so far about the film seems to be very, very promising.