Captain Michael Burnham encapsulates why Star Trek: Discovery is boldly going where no show has gone before. 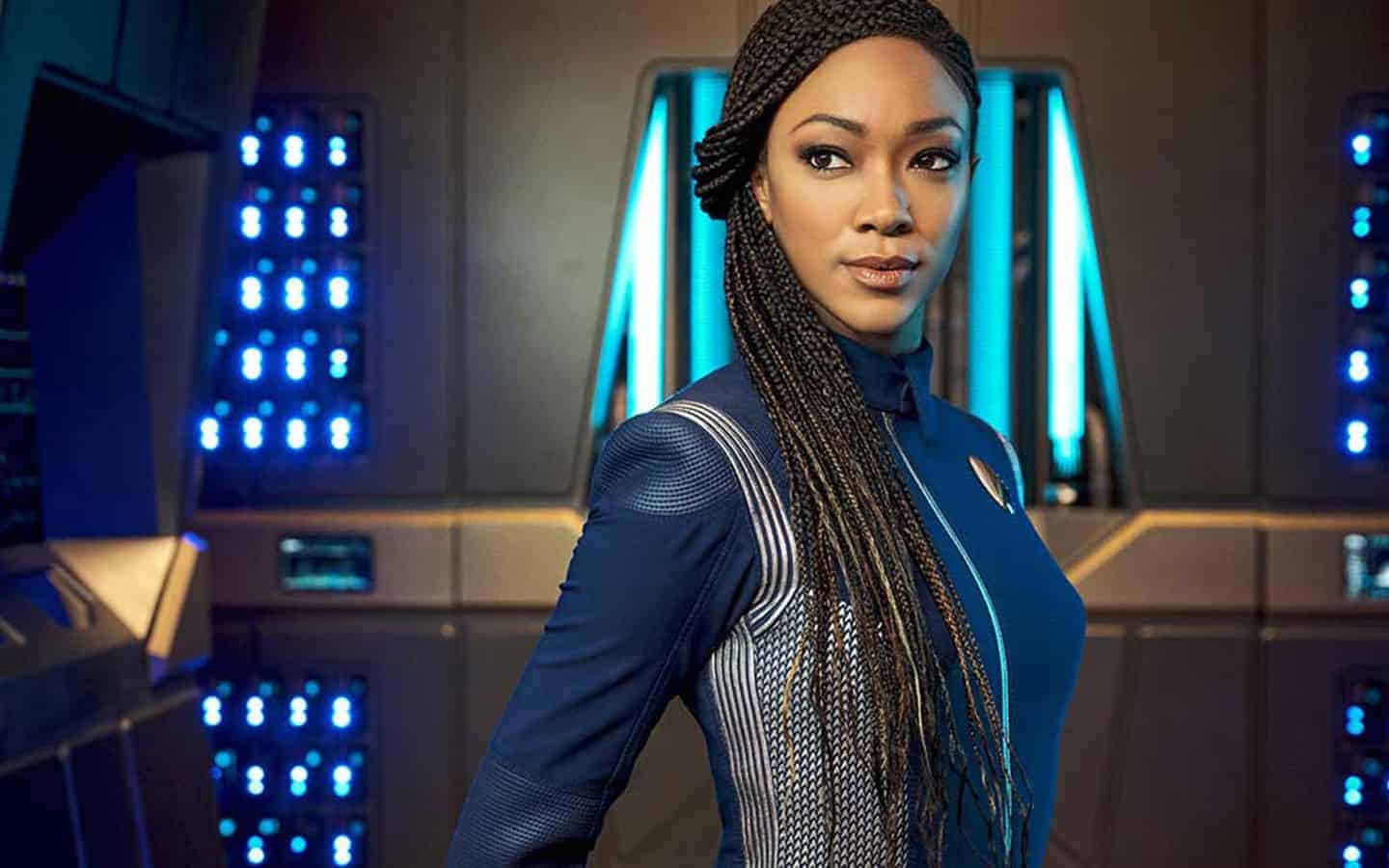 To date, there has never been a Black female lead in any of the Star Trek visual mediums.

Common complaints about the Star Trek: Discovery (2017) series thus far have been its overarching seasonal narratives, with no one-off episodes, and I’ll agree with that. The nature of television these days is like films, one and done, no room for stargazing. The neglect of some of the Discovery characters has certainly left some of the payoffs of the series lacking. To include, it would be nice to have some quieter episodes to really learn more about this amazing cast and crew. The snippets that we’ve experienced have been delicious, albeit crumbs in the grand scheme.

Moreover, there’s a subset of viewers who realized very early on that this was solely the ‘Michael Burnham show’ and they weren’t wrong. It was in the marketing and promotional materials so it wasn’t a surprise or a rug-pull.

I haven’t scoured the Internet from top-to-bottom to see if they mean this in the heavily coded racial/gendered way that I’m interpreting; they probably are and I won’t subject myself to intentionally reading someone’s sexist or racist rants, but this pointed commentary really pinged on my radar because to date there has never been a Black female lead in any of the Star Trek visual mediums and anti-Blackness can exist blatantly or insidiously within fandoms. Before we begin the merry-go-round of what about-isms, tertiary or cast member in the back is not what I mean.

Much love and respect to Lieutenant Uhura played by the legendary Nichelle Nichols, but she was an aside in the original series where she could have shone in some solo episodes or been expanded in the films that came thereafter. Thus, I side-eye the individuals whose commentary is that there’s just too much Sonequa Martin-Green when we haven’t seen any Black female characters as leads or in the series proper in decades. Small clap for the sole other Black woman crew member (with screen time) aboard Discovery (with lines) besides herself played by the amazing but still limited in characterization, Oyin Oladejo.

In retrospect, the last prominent Black woman in the franchise was Guinan played by Whoopi Goldberg from the 1980s whose last appearance was in 2002. To include, she was adrift in a sea of no Black Women co-leads and that’s what I take umbrage with. Star Trek, as a brand, seems to be trying at least to make up for lost time by casting Michelle Hurd as Raffi Musiker in Star Trek: Picard (2020). However, she’s the only Black woman with a prominent recurring role in that series, so the cycle of sole Black woman continues.

I suppose I should address the larger elephant in the room regarding the sci-fi fantasy genre as a whole. There’s still a lot of work that needs to be done in diversifying the medium. And yet, the glimmer of light is that Black Women actually have a lot of representation NOW in this particular genre but not always as leads mind you. From Thandie Newton in Westworld (2016–) to Adriyan Rae who is the titular star of Vagrant Queen (2020) on SYFY, there’s an ever-growing list of Black Women who have carved out niche spaces in science fiction.

For now, it seems like the visual medium where Black Women are welcomed, can thrive, and most importantly survive. However, my sense of unease and trepidation about this boon is not invalid or the musings of conspiracy theorem. There is an instability in the ‘Hollywood’ machine that’s built upon racism and following trends, which include hiring all of the Black or people of color for everything and then the inevitable dry spell.

Thus, seeing Commander, and now acting Captain Michael Burnham every week on my screen is the normalcy we should have had years ago and why she’s been saddled with so much ‘representational’ baggage. She doesn’t have many references to compare herself to or against in the larger Star Trek canon and it makes her an easy target for scrutiny.

Sadly, Sonequa Martin-Green, i.e., Michael Burnham has to do all the heavy lifting in this narrow space where the larger sci-fi/fantasy genre and media itself has failed to broaden, and thus this game of retroactive catch-up oftentimes feels lopsided in the larger narrative surrounding her character.

When Black Women are the leads or the faces of anything, it’s still a humongous deal because their presence is still sparse in the broader landscape of entertainment. The phrase ‘representation matters’ is more than a slogan—its a buoy in the storm for many marginalized people—and a lifeline of hope in a hostile world.

Broadly, film and television is a fantasy replete with escapism, but the images generated hold incalculable power. This is where gaze, experience, and critique becomes paramount because the viewing public coupled with media executives can erode or elevate an actor’s career prospects. Understandably, there are other cogs in the machine of an actor’s longevity but I’m focusing on the key metrics here: viewers and funders.

Behind the scenes, Black Women are not allowed to have off-days, sick days, or diva-days. They always have to show up at 100 or else they’ll be cancelled, replaced, written out, written off, black-listed, or killed and swept from our collective memory and the series proper entirely. Misogynoir, a definition created by Moya Bailey describes the unique and particular race and gender biases directed towards Black Women in visual and popular culture. This phenomenon fuels many of the turbulent behind the scenes experiences of Black Women in media’s past and present.

An example where misogynoir is a rampant and infamously ugly problem is within the CW series The Flash (2014–). Candice Patton’s character Iris West, the Black co-lead and primary love interest has received consistently disparaging and violently racist comments and death threats throughout her tenure on the show.

I will not make space here or link to any of these remarks, but I will let her most recent comments from the SXSW panel speak to the problems and support that Black women (and other marginalized people) need from people in positions of power and their colleagues.

Question and Answer begins at the 1:54 mark.

As we are seeing more representation (in media), my concern is how can networks do better to protect those actors?

I think in a lot of ways it is a new frontier. What I would have hoped and would like to highlight for the future of network television and any kind of creative endeavor is if you are making the choice to hire diverse talent you need to be aware of what comes with that. There is all kinds of educational training that needs to come with that.

It’s not enough to just hire a Black actress, a queer actor, etc. for your shows and say, ‘look we checked the box we’re diverse.’ You then have to make sure that those people are set up to succeed and win and feel safe. That comes with a lot of things and I don’t think networks, in general, are equipped to handle that. I speak about it all the time…I mean even things as simple as you know me in or at my work…

Me asking for that is not me being difficult, it’s me being a diverse talent on this network asking for something that’s different…and if you hire me with the intent of knowing that I have different requirements and different needs that’s just what it is. So, I think there’s just a lot of education that still needs to happen.

For another infuriating and heartbreaking example, last year, Nicole Beharie of Sleepy Hollow (2013–2017) fame revealed that she was ultimately fired as the lead and subsequently blacklisted from acting due to the powers that be taking issue with her auto-immune disease. *So, to be clear, this opens an even bigger Pandora’s Jar surrounding race, gender, and disability issues.*

She was gradually written out of her own series and her character’s fate was death in the season 3 finale. All of the behind the scenes details were kept under wraps at the time, but the fandom had eyes and were incensed at the visible maltreatment of Nicole Beharie by the network.

The silver lining was the fandom’s collective protest to expose the show for its racism and ultimately the show was shelved and cancelled due to a collective drop in viewership and engagement. With a screenplay written and directed by Channing Godfrey Peoples who is also a Black Woman, Miss Juneteenth (2020) is the first major film/leading role that Nicole Beharie has had in years.

“My costar and I were both sick at the same time but I don’t believe that we were treated equally… He was allowed to go back to England for a month [to recover while] I was given Episode 9 to shoot on my own. So I pushed through it and then by the end of that episode I was in urgent care. And all the doctors, including the doctors that the studio was sending, were all confirming, ‘Hey, she can’t work right now’… But I was labeled as problematic and blacklisted by some people.”

Sometimes I think that some people I was working with didn’t like that I was unwell but loved by the audience. I would think they’d support that. But everyone of color on that show was seen as expendable and eventually let go.”

While writing this retrospective (and binge-watching these past three seasons again) I realized just how protective I’ve become regarding Sonequa Martin Green’s role of Captain Michael Burnham. In the 21st century she’s a rarity, an anomaly even. Amidst the sea of programs on television or movies at the box office, she’s an outlier, but in the 32nd century, she’s THE rule—not the exception. (Here’s a mathematical equation for you. Black Women have been fighting for basic human rights for the past 400+ years, so how much longer do you think it will take to for us to get to Michael Burnham?)

After shedding some of the trappings of her Vulcan-raised conformity—aka those notoriously straight smooth bobs most Vulcans wear; her beautifully sculpted natural hair in seasons one and two became a signature, which transitioned to a cascading waterfall of braids in season three. These varied representations of Black beauty and adornment in the modern era still need legislation to keep from being discriminated against but in the future, they’re THE standard.

Upon reflection, she has more screen time and overarching presence than her white male and female co-stars and that makes her a maverick. She’s admired, respected, loved, and cherished by the show itself and her crew aboard the Discovery. She’s been allowed to grow, be imperfect, win, fail, learn, teach, and embody everything that a good well-written character should be. Without her, the entire show’s inquisitive ethos about the future would collapse.

Space is considered the final frontier in the original series, but its claim to fame was a smaller more impactful 4×3 space: television. Sonequa Martin-Green is the dilithium that’s powered Star Trek Discovery’s resounding success and her historic role of Captain Michael Burnham encapsulates why the show is boldly going where no show has gone before.