2021 marks the 60th anniversary of Mothra and for her birthday let's giving the winged goddess a much deserved retrospective! 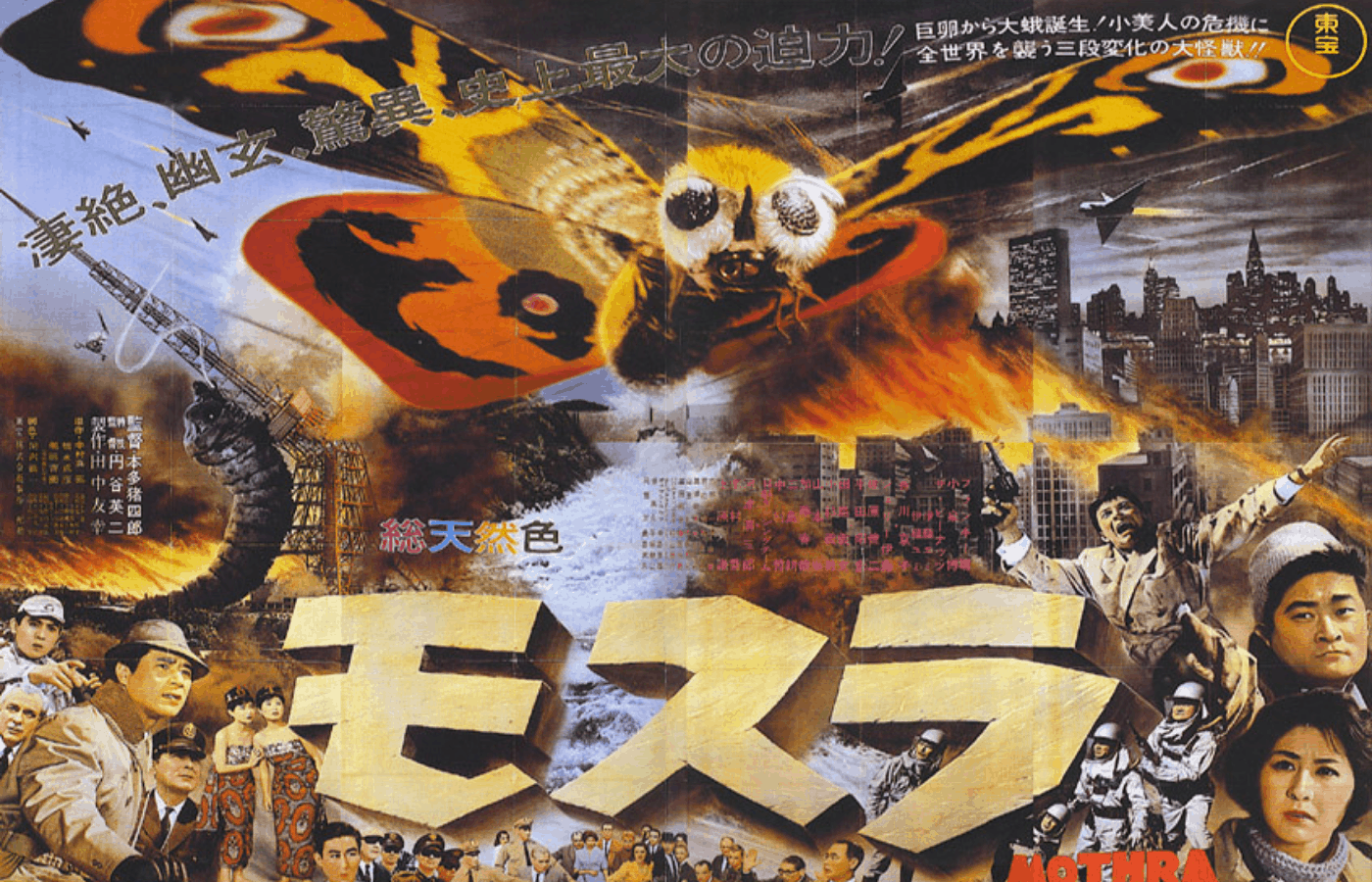 2021 marks the 60th anniversary debut of one of the most popular kaiju of all time: Mothra! For her birthday let’s give the moth goddess a deserved retrospective!

2021 marks the 60th anniversary of the Queen of the Monsters: Mothra, debuting in her solo film fittingly named Mothra which was released in Japan on July 30, 1961. Directed by Ishiro Honda (who had directed the original Godzilla/Gojira film and the Rodan solo movie in years before and would later helm many beloved entries from the Showa era), it is a real work of art, boasting evocative visuals by Eiji Tsuburaya, a classic musical score by Yuji Koseki and nuanced storytelling by Shinichi Sekizawa.

Based on the original story “The Glowing Fairies and Mothra” (which was written by Shin’ichiro Nakamura and commissioned by Toho producer Tomoyuki Tanaka), the movie is the opposite of the hauntingly somber Gojira. It is vibrant, colorful and playful, but still packs a political punch. The story goes as follows: An expedition to Infant Island discovers a native civilization and two tiny fairy priestesses known as the Shobijin (“small beauties”). Mothra, the island’s deity, would be awakened and sets out to Japan to rescue the fairies after they are kidnapped by the shady leader of the expedition.

Few cinematic monsters are as iconic as Mothra, especially in an era in which a large number of creature designs seem influenced by the Cloverfield beastie, lacking not just originality, but also an identity of their own. The simplicity of her design is one of her biggest strengths, as her shape is instantly recognizable by fans and non-fans alike – something she has in common with Godzilla and King Kong. A great example of how less can be more.

Though she’s inspired by insects (specifically caterpillars and moths), Mothra isn’t unpleasant nor scary to look at. She’s fuzzy and adorable, with big, bright blue eyes and large, beautiful wings sporting colorful patterns. Even her larval stage is really cute: it’s hard to not be endeared by a chubby, squeaky caterpillar that is nonetheless brave enough to take on King Ghidorah or Godzilla on her own.

She’s elegant, feminine, and majestic, a true goddess in every sense of the word. But there’s also a sense of vulnerability, unlike what you may see in Kaiju with a fiercer or more dangerous appearance. In six decades since her debut her design has barely changed goes to show that Honda and his team got it right in their first attempt. The one major redesign came in 2019 with Godzilla: King of the Monsters, and yet both the larva and imago forms retained most of the features fans know and love about the character.

It’s no exaggeration to say that it’s thanks to Mothra that I now have a greater understanding and appreciation of the endlessly fascinating world of real-life moths and butterflies. It’s fairly easy to be unaware of the many trials and tribulations of creatures that are so much smaller and fragile than us human beings, but before I get carried away with the topic, I would just say that it’s worth being informed about insects that tend to be considered pests or nuisances but are harmless to us (to be clear, some larvae can damage textiles or clothing, but there are ways to keep them away and protect your items).

Going back to the film, it should be mentioned that Mothra broke new ground by introducing a novel concept: that of a benevolent monster. In most creature features, you’d expect to see monsters wreaking havoc, destroying cities, and being a threat to humanity. Mothra, however, means no harm, however.

She’s gentle and virtuous by nature and won’t hesitate to risk her own life (or even sacrifice herself) to protect her people, her allies, or the world at large. Any destruction that results from her actions is largely unintentional. When making her way through Japan and Rolisica, she’s merely acting out of a need to rescue her fairies.

In the standard monster movie template, the existential threat is the driving force of the narrative. The human characters have to scramble and find a way to either contain or destroy the monster, which usually appears as a result of human misbehavior (pollution, atomic testing, among other things). Here, it is the human drama that moves the story forward, as the real villain isn’t the titular kaiju, but the greedy Rolisica capitalist Clark Nelson (Jerry Itô), who took the Shobijin away from their home in order to exploit them for profit, by making them sing and perform in shows.

The ethical, moral side of humanity is represented by a trio of unlikely heroes. Reporter Zenichiro “Snapping Turtle” Fukuda (Furankî Sakai), photo-journalist Michi Hanamura (Kyôko Kagawa), and a scientist, Dr. Shinichi Chujo (Hiroshi Koizumi). They are able to communicate with the fairies and push for their release. Rolisica initially defends Nelson’s right to keep the Shobijin, but the country eventually changes its tune when Mothra begins advancing and human weaponry is unable to stop the giant caterpillar.

Though the fictional country of Rolisica is very obviously an amalgamation of Russia and America, and the film has an anti-capitalistic theme (that works as both a critique of Western ideals and a cautionary tale for Japan about the consequences of putting profit over everything else), it is thinly-veiled rather than overt.

The filmmakers opted for subtlety and that works better than explicitly referencing the United States, in my opinion. It probably also had to do with Columbia Pictures co-financing the project (the climax taking place in an “American-style city” was in fact something Columbia stipulated in the contract).

It’s no overstatement to express what a marvel is to see Mothra in motion. It is a triumph of the imagination of Honda and Tsuburaya. She doesn’t come off as a puppet or a person in a suit, but as a living and breathing creature, crawling in an undulating wave motion the way a real caterpillar would. After she emerges from her cocoon as an imago, she’s even more striking. A fluffy, gorgeous savior with an impressive wingspan, creating powerful gusts of wind with each flap.

By the end of the movie, the relations of Japan and Rolisica have improved, Clark Nelson has been stopped and the Shobijin are reunited with their goddess. It is a hopeful, positive ending in which justice prevailed and international cooperation produced a happy resolution.

It is clear Mothra wasn’t a menace that needed to be vanquished or a misunderstood freak of nature. People were empathetic to her plight and so, when she flew back to Infant Island, they smiled and waved goodbye. No hard feelings from either party.

After six years of frontline military service that left Honda with nightmares that accompanied him for the remainder of his life, plus a near-death experience when a mortar shell landed in front of him (but failed to detonate) it’s perhaps not too surprising (though I would say noteworthy nonetheless) that he moved away from propaganda films and documentaries to sci-fi and fantasy and more optimistic (if usually bittersweet as well) stories.

Mothra is required viewing for anyone with an interest in kaiju or Godzilla. Despite not being as action-packed as some would expect, its lighthearted tone keeps things entertaining to watch. Jerry Itô plays the smarmy businessman with gusto and Furankî Sakai, who comes from a comedic background, is presented with plenty of opportunities to let his humorous side shine.

More than being a mere visual gimmick, Japanese pop stars Emi and Yumi Ito (who together were known as “The Peanuts”). made the Shobijin iconic and also lent their vocal talent to the movie. Their unforgettable performance of “Mothra’s Song” (written by composer Yuji Koseki) went on to become as emblematic as Ifukube’s theme for the king of the monsters.

Aside from all its technical achievements and top-notch casting, Mothra’s biggest success is the message that lies at its heart. Even though it’s a family-friendly movie, it makes no attempt to hide some of the unfortunate realities of our world, such as the suffering caused by capitalism exploitation, colonialism, imperialism, nuclear testing, greed, and political strife between nations. And in spite of all that, it offers a sentiment of hope. It says that a better world is possible.

It’s easy to feel cynical, looking at the current state of things. We’re more than a year into an ongoing pandemic that shows no sign of stopping, there’s political violence and polarization all around the world, the effects of global warming continue to get worse and billionaires spend millions in playing at being astronauts instead of solving the many problems they create by hoarding obscene amounts of money.

Movies are mainly escapism, but we can learn from them. A common theme we can find in Honda’s films featuring Mothra is that working together and putting differences aside for the greater good can help the characters to reach their goals.

Suggesting to be gentle or to support good causes could sound corny or like a banality. However, I’d say that there can’t be too much of that in our modern world. Our society can be deeply individualistic, apathetic, and/or toxic. You can see a lot of that in social media, which tends to be fueled by outrage, dogpiling, and negativity.

Showing kindness to others can go a long way towards creating sensible, and welcoming spaces and have a positive impact on the lives of people or other living beings. Happy Birthday, Mosura!