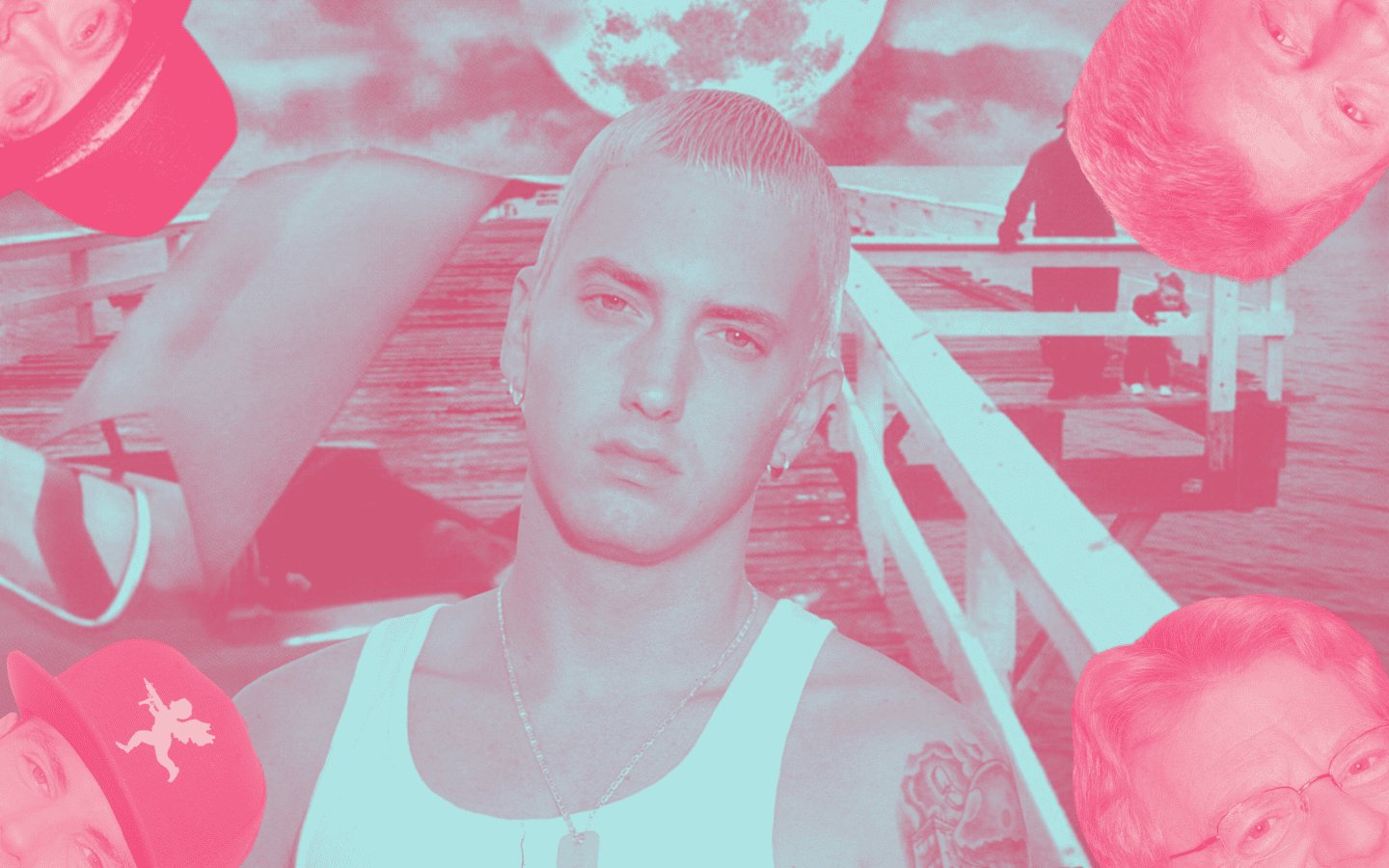 About The Slim Shady LP

The Slim Shady LP was the second studio album from hip-hop megastar, Eminem. The album pushed him into massive celebrity status with quickness, being that it was certified QUADRUPLE platinum 1 year after its release. There are many celebrity jokes on The Slim Shady LP, named for Eminem’s insane alter ego.

Although this album is not very friendly for youth, women, or the celebrities outlined below, it is a satirical piece of musical theater according to the artist. The darker content would be propelled even stronger by the dark musical production from Dr. Dre, placing the Michigan native within a worldwide spotlight. With MTV’s Total Request Live being very popular at the time, you could bet you were going to see an Eminem music video most days you tuned in.

Here are our favorite celebrity jokes on The Slim Shady LP. Make sure you’re not too close to the edge of your seat as you read on.

“Hi, kids! Do you like violence?/
Wanna see me stick Nine Inch Nails through each one of my eyelids?”
-Eminem, My Name Is

Honestly, I don’t really see the overt diss here. Much of The Slim Shady LP revolves around Eminem feeling like an outsider in mainstream culture, especially with his offensive lyrical content. Nine Inch Nails was a very popular band at the time.

“My brain’s dead weight, I’m trying to get my head straight/
but I can’t figure out which Spice Girl I want to impregnate”
-Eminem, My Name Is

“Got pissed off and ripped Pamela Lee’s tits off/
smacked her so hard I knocked her clothes backward like Kriss Kross”
-Eminem, My Name Is

This is a great double diss. At the time of this album, Pamela Anderson was (and still is) regarded as one of Hollywood’s classic beauties. Eminem also references hip hop duo Kriss Kross, who were known for wearing their pants backward.

“You know you blew up when the women rush the stands/
Try to touch your hands like some screamin’ Usher fans”
-Eminem, My Name Is

“Hilary Clinton tried to slap me and call me a pervert/
I ripped her fuckin’ tonsils out and fed her sherbert”
-Eminem, Role Model

Both Clintons get fun poked at them on this album.

“I’m cancerous, so when I diss you wouldn’t want to answer this/
If you responded back with a battle rap you wrote for Canibus”
-Eminem, Role Model

“You beef with me, I’ma even the score equally/
Take you on Jerry Springer and beat your ass legally”
-Eminem, Role Model

When the Slim Shady LP came out, Jerry Springer was the king of trashy daytime television. During this time, The Jerry Springer Show was causing a lot of controversies. The constant violence on the show brought up legal concerns about what is and isn’t considered assault when it comes to reality television.

“I get blunted off of funny homegrown/
cause when I smoke out I hit the trees harder than Sonny Bono”
-Eminem, Role Model

This is another disturbing and offensive lyric about death from Eminem. Sonny Bono, of Sonny & Cher fame, died when he hit a tree while skiing. Nothing is sacred when it comes to old Eminem lyrics.

“So if I said I never did drugs/
That would mean I lie and get fucked more than the president does”
-Eminem, Role Model

This album came out when the Bill Clinton/Monica Lewinsky scandal was a common joke in mainstream culture. While this joke may not have aged well, it was relevant at the time.

What made Eminem stand out in the world of hip hop was his attention and dedication to hip hop culture. A lot of other white rappers, and rappers in general, at the time were corny. They were just trying to cash in on a new trend.

Around the time this album was made, there was a rumor that singer and hip hop artist Lauryn Hill made comments about not wanting white fans. The initial allegation was made by a caller on The Howard Stern Show, who said they saw these remarks during an MTV interview. The rumor spun out of control afterward.

Lauryn Hill has denied these statements over the years, and no one has been able to find the aforementioned interview. Regardless of if it is true, it was still used by Eminem to crack a few jokes on The Slim Shady LP.

OJ is innocent. You heard it right here. It was Eminem the whole time.

“When I drop this solo shit, it’s over with/
I bought Cage’s tape, opened it, and dubbed over it”
-Eminem, Role Model

The beef between Cage and Eminem goes way back. Not only does Eminem take shots at Cage on the Slim Shady LP, Cage also takes shots at Eminem on his debut album Movies For The Blind.

“My mind won’t work if my spine don’t jerk/
I slapped Garth Brooks out of his rhinestone shirt”
-Eminem, Role Model

This one is just tasteless. However, this type of crass humor is what shot Marshal Mathers into the mainstream.

White rappers were hard to come by back in the day, and the Beastie Boys took up a lot of space in the hip-hop genre. Eminem is so overshadowed that he can’t even get recognized in his own city.

Eminem has to come after other Detroit-based rappers on his debut album. That’s just how hip hop works sometimes.

“I’m comin’ out swingin’ so fast it’ll make your eyes spin/
You gettin’ knocked the fuck out like Mike Tyson”
-Eminem, Just Don’t Give A Fuck

What Are Your Favorite Celebrity Jokes On The Slim Shady LP?

We hope you enjoyed our breakdown of the many celebrity jokes on the Slim Shady LP. Did we miss any of your favorites? Let us know on social media!