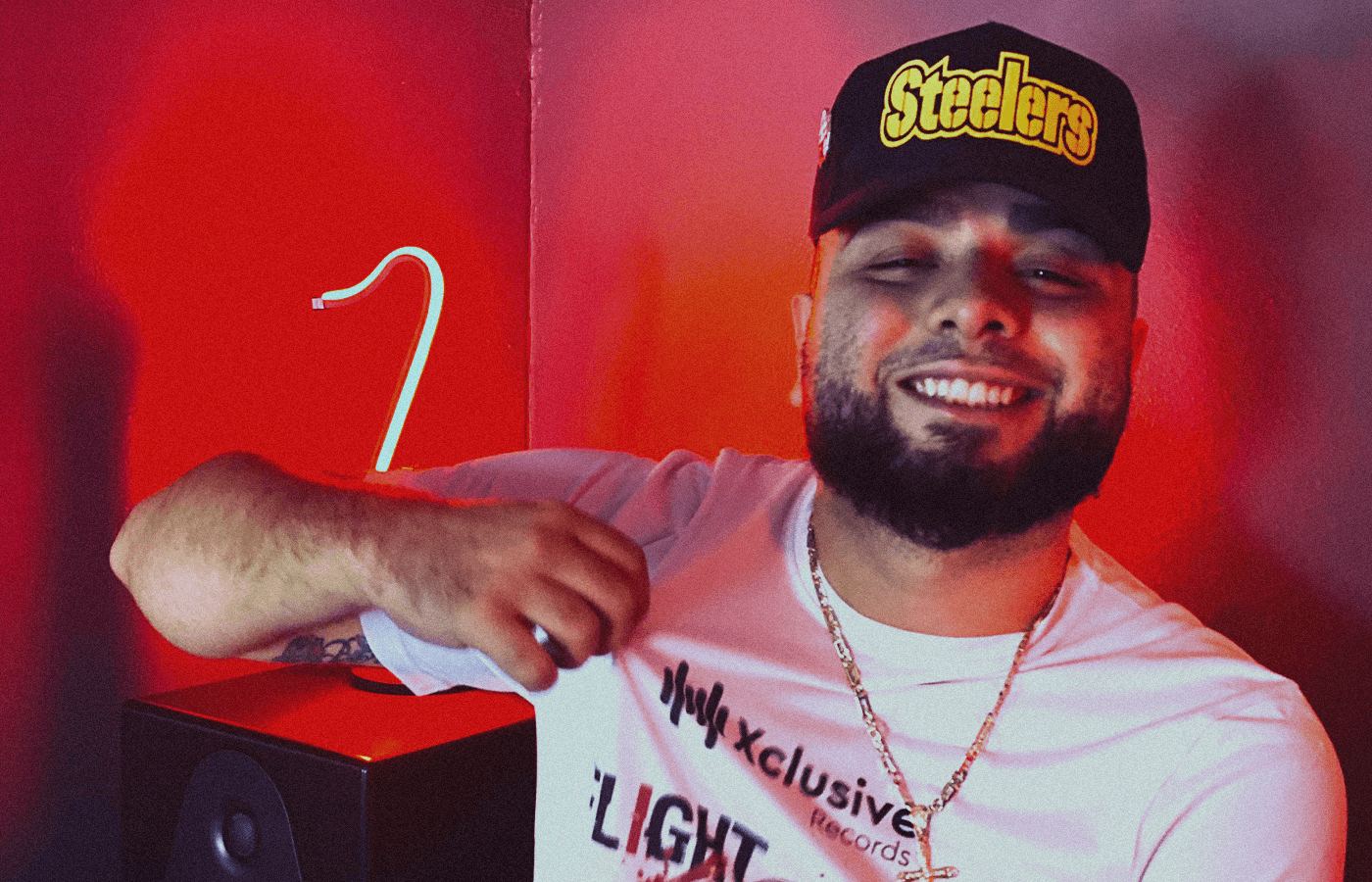 Orlando is a thriving city for mad talent. From the vast suburban punk scene to the booming downtown hip-hop crowd. I had the pleasure of linking up with Chreezus, a multi-talented hip-hop artist based out of the Orlando area. I reached out to host an interview and in turn, he had me follow him along to his place and the studio where he works. A lot of artists chase fame before putting in the leg work, but not Chreezus. Signed with Xclusive Records, Chreezus is blending fast-paced lyricism, booming beats, and an attitude that just commands respect.

After listening to a couple of tracks, any hip-hop head can tell Chreezus has a future career in the competitive medium. I also came to this conclusion by watching him work with his team and how he talks about his music. The interview was an insightful opportunity to see an up-and-coming artist in their element and how getting started really means surrounding yourself with the right team. Please note this interview was edited for clarity. Enjoy.

You’re originally from Jersey, when did you move down to Florida?

Chreezus: Yes! East Bay Street, welcome to the crib, my boy! My mom and pops took me out here when I was a baby man. I always say that I carry the Jersey swagger and you know what I’m saying? If you were to ask me, I will always tell you I’m from Florida. So Orlando Florida is definitely the home base.

Do you think (if at all) moving to Florida has affected your music?

Chreezus: I say it affected my sound because I don’t really make New York music. I feel like up there, it’s a different energy, a different vibe, a different culture. They’re surrounded by different things than me. I don’t even want to put myself in a box.

I can’t really say that I’m just a hip-hop artist, because I like being able to do different things and I feel like that’s what separates me. That’s obviously a benefit that I got from living here in Orlando. At the end of the day, Orlando is really like a melting pot. At this point in time, as they said, New York was the melting pot, but I feel like everybody from New York is moving down here.

Now you’ll see a bunch of different people from different races, different cultures and that definitely played a big part in my music.

When did you start to consider music a serious career option?

Chreezus: We were about to go do a podcast, that’s how I got my feet wet. I remember I was working at a call center at the time and there was this girl named Free. We were selling vacation packages. She just heard how I was talking, how I was finessing you know, doing my thing.

She would see me interact with people over the phone and everything and she came up to me asking “What do you do after work? You should come to this show with me.” So it was, she ended up taking me to the studio that we’re about to go to for the first time, that was probably four years ago now.

She sent me to the studio for the first time and we shot a pilot episode for her show, the concept of the show was really just interviewing local artists. See how they’re moving, you know what I mean? Just getting their insight, see their taste in music, their opinions on stuff that’s going on in the city, things like that. That’s what really made me get into this.

After she left, I took over. I did the show for probably two years and just doing it kind of got me frustrated. I mean you run an outlet – when you put your heart, your fucking soul, and countless dollars into something it can get frustrating managing it all. It’s a lot of responsibility and I’m not going to lie there were times when I got complacent. After rebooting the show for the third time with different co-hosts I was like, I think this is done and I want to switch it up now.

I know for a fact that whether it’s music or radio, entertainment is definitely going to be the lane that I succeed in. Coming off the radio show, dealing with all that frustration, I knew for a fact that I was going to be doing something in this game. After we would interview artists, we would have a recording studio right next door, which is where we’re actually shooting the new podcast.

We have a whole DJ booth and next door is where artists would record. So they would get their interview done and then after that, as a thank you for the interview they would pay for a session. After I’m done with my show, I’ll go to the studio, wind down, have a couple of drinks, smoke a little bit and that’s really it.

If you look at me, you would think I was an outsider, you know what I’m saying? Like, I’m the lightest one, the shortest one, probably even the chubbiest one there too. It’s all good at the end of the day, I’d never fuck around with who I am. You could love me or leave me alone. That’s one thing I love about these people, this family, literally accepted me with open arms.

Xclusive Records always made me feel like I was home, you know what I’m saying? Everybody over there is extremely talented and we’re all at the point where we just want to win. So we’re not going to fucking hold back for anybody.

As a creative person, it can be years before you ever see any type of tangible success, what helps you stay motivated?

Chreezus: I’ll be honest with you, I feel like I did burn out but it wasn’t really because of the music. I feel like I was in a fucked up living situation. I have an ex that I was extremely unhappy with and they were draining. She just took the music out of me. She was very controlling and she was just doing shit for the wrong reasons.

At that point, I wasn’t performing and I wasn’t making songs because I didn’t want to get her mad. I have a couple of songs coming out from when she left and I feel like ever since that happened, I got all that motivation from when I first started right back.

My motivation is my family and at the end of the day, I don’t want them doing anything. I want to be able to support them, I want to be able to just be there for them as much as they have been there for me. I want them to just chill and not have to worry about anything. They raised me man, and they raised me right too. They’re the best, shout out to Moms, Pops, and Breezy B.

Do you feel you have more of a producer’s mindset or a lyricist’s mindset when you’re making songs?

Chreezus: I feel like that’s something I got to work on because if you think about it, there are great lyricists that get no play, they get no time to shine. Everybody wants radio hits, but what always stuck with me is the lyrics. People like Cole, Fab, Hopsin, Eminem, Game, Little Wayne, you know what I’m saying? One thing that I’m working on right now is being able to transition the lyrics to something that could be slowed down, like Joyner Lucas.

I feel like he hit it perfectly on the head when he first came out. He wasn’t really getting a lot of play from a lot of people because all his shit was bomb, pop, pop, pop! You have to fucking slow it down for people to actually understand, now he’s learned how to twist it and make radio hits. He’s been able to develop that skill set and I’m sure he’s always had it, but now he’s just putting it into music for us to see. Joyner is another one for me, he’s the GOAT.

As you’ve been developing your own style, have you found it difficult separating yourself from other artists?

Chreezus: When you don’t have the support of people that you thought you would have, at the end of the day I listen to a lot of people that have made it and people that are here in the city that have more buzz than I do. But I’m listening to this shit. I feel like I bring a whole other perspective of music to the game. I’m not a closed box and I can hit you with anything. You could put me on any beat and I’m there.

So that’s one thing that I want to do this year is not only prove to everybody that I can do this but also prove to myself that I can do this. Cause last year, I took a hiatus and I think I dropped one music video and two songs. It was all at the beginning of the year and everything else was towards the end. This year it’s no-holds-barred, I’m ready to take this shit off!

Where do you see yourself in five years with this?

Chreezus: I just want my voice to be heard. Whether it’s music or on the radio. Cause I do love the radio, Flight 407 that’s my baby! We’re coming back but now I’m in debt with the radios again, that was my first love. So I went to school for television and radio broadcast and I remember all my boys would be playing sports and shit but I just wanted to be the guy that I was on the side announcing the games. I don’t know what field it is it’s going to be in, whether it’s production or what.

All I know is entertainment is definitely going to be it. I’m going to crush it and I’m gonna make the most out of it. You can find me on Instagram @chreezus3, you can find me on YouTube as well. The music video for Space is at 27,900 views and we’re almost there to 28. Let’s get that final push!