Color Out Of Space: The Perfect Lovecraft Adaptation 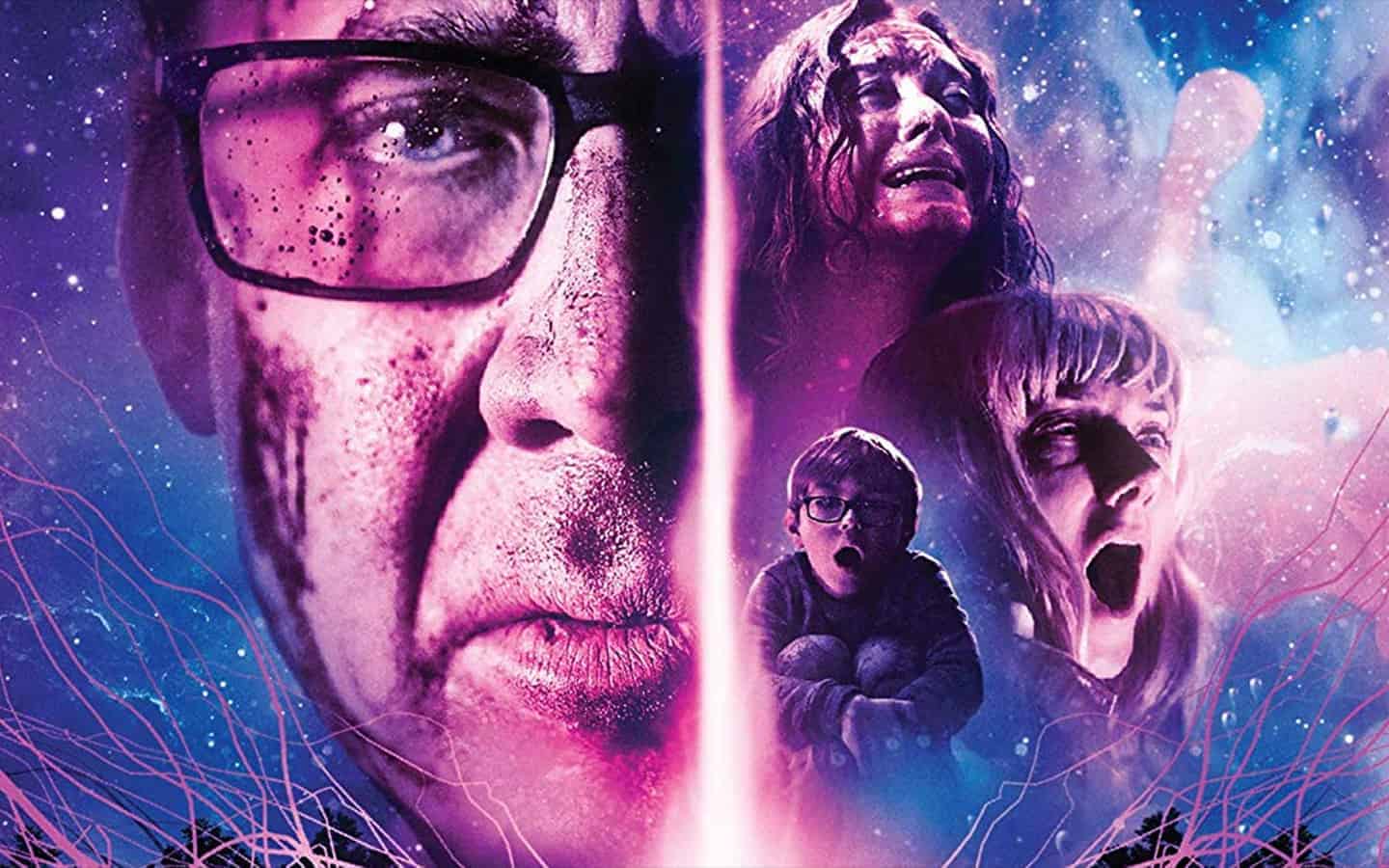 About Color Out Of Space

What makes something Lovecraftian is the universe not giving a shit about us. This is exactly what Richard Stanley did perfectly in Color Out Of Space.

H. P. Lovecraft, what can we say about the man that hasn’t already been said? Creator of Cthulhu. Yep. One of the originators of Cosmic Horror. Everyone knows that. His works have been adapted for comics, music, radio, audio dramas, and movies. Yep, but that last one causes problems.

For many a fan, they claim that his particular brand of weird tales is unfilmable. And this comes from the fact that the beasties of his creation are never described because they are unimaginable and the human mind cannot fathom them.

But, there have been countless films adapted or inspired by his works. Some, like Stuart Gordon’s Re-Animator, are cult favorites. While others, vanish into obscurity. Is this because H. P. Lovecraft is unfilmable? Or could it be that the right mind mixed with the perfect team and a particular vision had to come together at the right time to make one?

If so, then perchance Richard Stanley’s 2020 adaptation of Lovecraft’s 1927 short story, The Colour Out Of Space, could be the exception to the rule.

Color Out of Space Summary

When a meteorite strikes the farm of Nathan Gardner (Nicolas Cage) and his family. They find themselves at odds with a beautiful infection that’s not of this world. It begins to mutate everything in its vicinity into vibrant monstrosities.

The Return of Richard Stanley

For those who don’t know, Richard Stanley is a South African writer/director who most famously was fired after one week of shooting on The Island of Dr. Moreau, the one with Val Kilmer and Marlon Brando. But, don’t let that put you off, he also wrote and directed Hardware and Dust Devils, plus a whole lotta short films. And in a way, he is the perfect choice for a Lovecraft adaptation produced by the same guys who released Mandy (which has similarities to cosmic horror).

In interviews for the movie, Stanley has told about how his mother would read him, Lovecraft, as a child. And H.P. Lovecraft’s The Colour Out of Space was his all-time favorite tale.  Which makes Stanley the right man for this job. But, I’m getting off track here. Before we can talk about this new entry into the pantheon of Lovecraft adaptations, we must first look at the original short story that inspired it and then question why Lovecraft is so hard to adapt.

First published in 1927 and by all accounts was Lovecraft’s personal favorite tale of his. The Colour Out of Space takes place after the actual events and is told, like most of Lovecraft’s tales, as a first-person narrative. This time though it is a tale within a tale, as an unnamed narrator is being told the story by a local of the ‘blasted heath’. What follows is different to most Lovecraftian tales of horror, there is no Elder God, nor a sign of an Old One.

Hell, Cthulhu doesn’t even appear. And this is just fine, for Lovecraft has created a truly alien life form that spreads and corrupts everything it comes into contact with. And for those of you who have no idea what this alien being is…it’s a color beyond the spectrum of anything we humans can perceive. But, don’t let that fool you, for as with every cosmic horror tale, it is what lies beyond the ether that gets us.

Part of the reason, most scholars believe, that Lovecraft wrote about things outside the spectrum of human sight, is because he was tired of the all-too-human style aliens found in most science-fiction tales of the time. Which, makes sense.

At the forefront of cosmic horror, Lovecraft was the man to bring forth another kind of alien. One that defies all explanation and powers of description. Similar to Who Goes There?’s The Thing, or any of Junji Ito’s own works. There is the perfect melding of Science-Fiction, Cosmic Horror, and Body Horror to be found in this one tale.

Which brings us back to the beginning and why is it so hard to adapt Lovecraft to the cinema? And to be honest, this question has been asked time and time again with no proper concrete answer. YouTuber Rossatron in his own video “Where Are All The Big Lovecraft Films?” said this,

“Lovecraft’s fiction was predominantly grand in scale and although a story like Herbert West Re-Animator, works on a smaller canvas. So much of the imagination within Lovecraft’s work is kept to the page. Maybe it is only your imagination that can create anything as chilling as what Lovecraft intended.”

And maybe that is the problem with Lovecraft’s work, which does include a lot of vague descriptions and passages about how “the horror of what was before us was indescribable” and no description is given. Which would mean that for anyone who reads him, their imagination would conjure up creations unlike anything seen on the screen. And therefore any director’s version of a Lovecraftian horror would be fighting an uphill battle.

But then enter Richard Stanley and company. Speaking about his approach to making the movie, Stanely said:

“I felt there was an onus to keep suggesting that sense of ultra-dimensional intrusions into this world while things are coming from outside space and time in the first part.”

This meant that for the cast and crew, their mission was to bring not only the story of The Colour Out of Space to the big screen but also the same feeling one has when reading Lovecraft.

And from the outset, the cast and crew bring the creeps. From the opening shots of woodland, the trees have this other-worldly appearance and that combined with the score from Colin Stetson instantly sets the vibe and tone for this adaptation, which has a similar feeling to Mandy, and makes me think they are in the same universe… But, I digress.

Ramping up the tension is the star of the show, Nicolas Cage as the patriarch of the Gardner family. If you are a fan of Cage’s over-the-top acting style, you’ll be in for a shock. Here, he plays Nathan as an average uninteresting Dad. Only with something bubbling under the surface that you know will come out once the Color invades.

This isn’t a review of the movie, so you can all breathe easy. We’re just discussing whether or not, Color Out Of Space is the perfect Lovecraft adaptation. And to be honest, I’m sure it is. And this is the reason why… Unlike any of the previous Lovecraft adaptations, Stanley wanted to take it further than any other movie had before.

“But in the last reel, I felt that we needed to actually go there. We needed to actually show more of the thing that was causing it…but I hope in the final third we go further into the Lovecraftian universe than any movie has been crazy enough to go so far.”

And it is this desire, this need, to go further than any other movie before that makes Director Richard Stanley’s Color Out Of Space, the perfect Lovecraft adaptation.

Because when you watch any adaptation, no matter the budget, there is always that one thing missing. Pushing the boundaries of what has been put on the screen before. This is what Lovecraft did with his writing and anyone who thinks that putting some monsters in their movie with tentacles automatically makes their movie Lovcrafitan is dead wrong.

What makes something Lovecraftian is the element of the universe not giving a shit about us. This is exactly what Richard Stanley accomplished with Color Out Of Space. Is this the start of a Lovecraft renaissance? It is hard to say. But, given the choices available you’d be hard pressed to find anything as close to Lovecraftian proper.

RELATED: 8 Films In 7 Days – How I Spent My Shudder Vacation

Are You A Fan Of Color Out Of Space?

We hope you enjoyed our breakdown of Color Out Of Space. What are your thoughts on this Lovecraft adaptation? Let us know on social media.