The weekend of April 18th was supposed to be the premiere of the Wisconsin branch of the Scares That Care Charity Weekend, but the state of the world forced the con to be cancelled. Author Kelli Owen decided to do something about it. 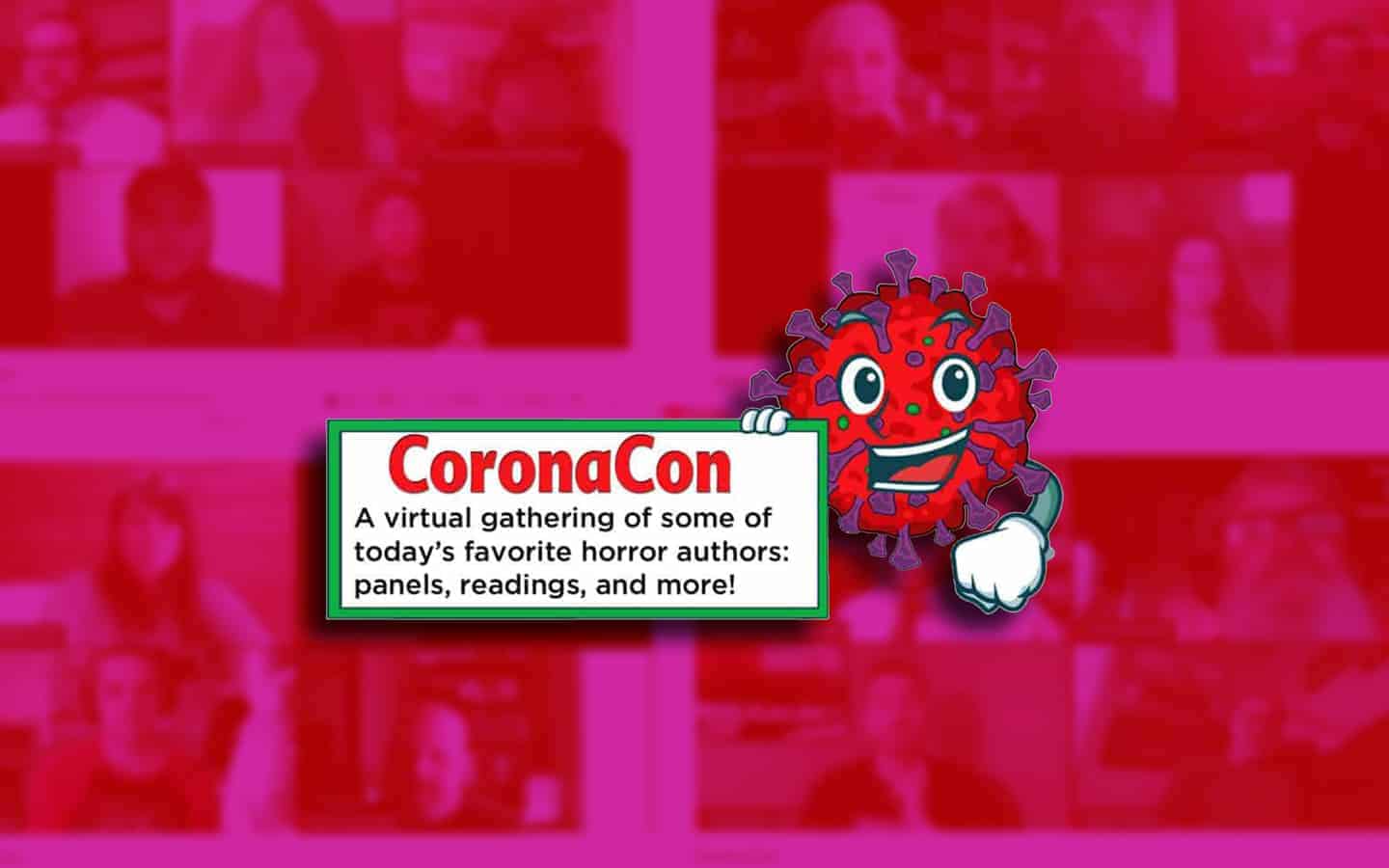 The Horror Community Will Always Find a Way and CoronaCon Was What We Needed.

There are many phrases thrown around in the Twitter-sphere of fandom and one that I am drawn to is the #horrorfamily or #horrorfam for short. Many conventions and their corresponding Facebook groups create our found families in life. The idea that we have families we are born with and ones that we create by the people we meet and bond with explains so much of what fandoms do for many of us.

When times get tough we look to our real-life families as well as these found families to help us get through. In this time of COVID19 and quarantine existences all over the world, one of the things we are missing out on are horror conventions. And the people we would usually be spending those weekends with are finding ways to survive the combined depression of missing out on events we looked forward to and the general boredom of having to stay home.

The weekend of April 18th was supposed to be the premiere of the Wisconsin branch of the Scares That Care Charity Weekend, but the state of the world forced the con to be cancelled. Author Kelli Owen decided to do something about it. She decided to organize the group of authors and put together a schedule for a live streamed virtual event.

In the true spirit of social distancing, I spoke with Kelli Owen via email.

An Interview With Kelli Owen

PHASR Media (PM): How did Corona Con come together?

Kelli Owen (KO): Quite simply, because Scares That Care (Wisconsin) was cancelled. Upon that notification, several of us were immediately in a group text lamenting how much we’d been looking forward to it. Someone said, “We should do live readings online or something” and it went from there. After watching Tim Meyer host several authors, I had him show me how he did it, and then I literally whipped it all together in a week. A blur of a week, but yeah, a week! I started with those who were slotted to be guests (me, Mary SanGiovanni, Jonathan Janz, and Brian Keene) and then I put out a call to anyone who had been planning to table there (dealer’s room authors) and grabbed several of them. I couldn’t include everyone because we didn’t know for sure the length limits on the services we were using to pull it off, but it could have literally included dozens more and gone on for DAYS if we’d let it.

PM: What was the reaction from authors that you invited to participate?

KO: They were all onboard from the start, and needed it as much as the audience did. As the day got closer, I think we all felt a bit like when you pull into the convention parking lot—you know it’ll go fast, but it’ll be a blast along the way. Except this time, it wasn’t just a convention, it was as close as social distancing was going to let us come to a “seeing” each other. It didn’t disappoint. And I think the casual, at-home, atmosphere of everyone’s attitudes really let their true, awesome selves shine through.

PM: Did the event meet your expectations? What kind of feedback did it generate?

KO: I have been overwhelmed at the reception. I didn’t realize how badly it was truly needed, nor expect it to be so well received, attended, shared, liked, etc. I was literally bombarded with hundreds of messages and DMs throughout the day and far into the night, only to begin again in the morning. It’s fantastic, in a worn-out-need-a-nap kind of way. In the end, I am so so pleased it seems to have done exactly what we set out to achieve. And even with technical difficulties at the beginning, I think it went really well.

PM: Since the event went off so well, would you be part of putting together another virtual con in the future?

KO: I am definitely doing more. I went from no, to maybe, to “okay, let’s start lists of guests.” When? How frequent? How many? Those questions haven’t been answered yet. But I do have enough bodies on the short list to do at least two more. As the world continues to hunker down (to flatten the spread of COVID-19), we’ll figure out when to schedule them according to need, because it was all about needing to “see” each other and not feel so isolated, with the bonus of readings and panels to entertain. And after the world goes back to whatever we end up calling “normal,” maybe we’ll do similar things during the convention off-season (winter).

PM: For people that could not attend, are the events archived online?

KO: Absolutely! bit.ly/covidcon1 is now available. And we’ve also created a Facebook group for centralized discussion of the event, basically a post-con depression support group, but also somewhere we can eventually use to plan future events.

The line-up for the day kicked off with Joe Ripple, the head of the Scares That Care Charity. STC is a 501c3 charitable organization that identifies three families every year to raise money to help “fight the real monsters of childhood illness, burns and breast cancer” (https://scaresthatcare.org/ ). Ripple gave an update on the charity and the convention while assuring everyone that we are here for each other. The rest of the day, much like the author room of the in-person convention, went back and forth between author readings and panel discussions.

From 15 minutes before the event was going to kick off at 9:45AM on Saturday, the YouTube chat area was already filling up with authors and con attendees greeting each other and gearing up for the day. There was a definite energy of excitement and genuine happiness to be part of something that would replicate our time honored traditions of catching up with con buddies. One person even mentioned that as we waited for the stream to begin, it felt like we were waiting on line for the doors to open. After a brief hiccup on the tech side, a new link was established and we were off and running. Seeing Kelli and Joe talking about the group and the con was reassuring and made it start to feel real.

Scares That Care is a con that thrives on its horror fiction side. Hearing authors read their words and discuss their craft and the genre is the heart of the STC experience. Readings are both intimate and shared experiences in the room at the convention. Having these events take place in a live YouTube stream heightens both of these feelings. As Bob Ford kicked off the readings, it felt as if he was talking straight to our living room.

At the same time, it was impossible not to notice the chat group commenting as the reading progressed. Bob has a reputation in the scene as one of the best live readers and was a great way to break the gates open on this con. The content today was not going to be for the faint of heart or rated PG.

A little later in the morning, Brian Keene read the perfect story for our times, “Intersectionality” about an author at a con and his trusty bottle of hand sanitizer. Aaron Dries reading of a heartbreaking tale from his upcoming collection Cut to Care was another highlight of the day. Jonathan Janz, Stephen Kozeniewski, and Bracken MacLeod rounded out the readings for the day and kept us entertained with their stories.

And it wouldn’t be a convention without some panel discussions, so a virtual con needed the same treatment.  Thirteen authors, including the readers from the day and joined by Kelli Owen, Mary SanGiovanni, Matt Hayward, Wile E. Young, Somer Canon, Weseley Southard and Tim Meyer made up four panels. Topics looked at collaboration, finding new readers, likable vs. compelling characters and versatility. Moderators were from various websites that cover the genre, review the books and are well known members of the community online.

The day’s events were a breath of fresh air to this horror fiend. Seeing and hearing some of my favorite authors was a wonderful way to spend a Saturday. Being able to ask the authors questions in the chat and say hi to friends was great and made the community feel together even if we are miles and miles away from each other.

Knowing that I was here on the East coast, some tuned in from the Midwest and many were on the West coast as well as participants from England, Ireland and Australia (those are just what I was aware of – there may have been many other countries involved), this event truly brought together the world of horror books in a delightful way. At the end of the day, I wanted to pick up my t-shirt and hug my con buddies goodbye.

Horror fans are a tough tribe. The true horror of the corona virus pandemic doesn’t keep us away from consuming our favorite content. Horror novels, movies, comics and video games are part of our comfort food in these trying times. The other things that help us persevere is knowing that we are getting through these strange times together. Humans are drawn to each other and even when we can’t do that in person, we find a way to get an equivalent feeling.

Conventions are bright points in the monotony of our daily lives in normal times, in these not normal times we need to have shared experiences too. I am happy to have been in the audience, albeit from my couch, to witness Corona Con happen. It was the warm blanket horror fans need and helps us remember that we will make it to the other side and do these things in person again. Hats off to Kelli Owen and everyone that helped bring Corona Con to life. Hopefully, we will see each other soon, but we will definitely see each other online even sooner!