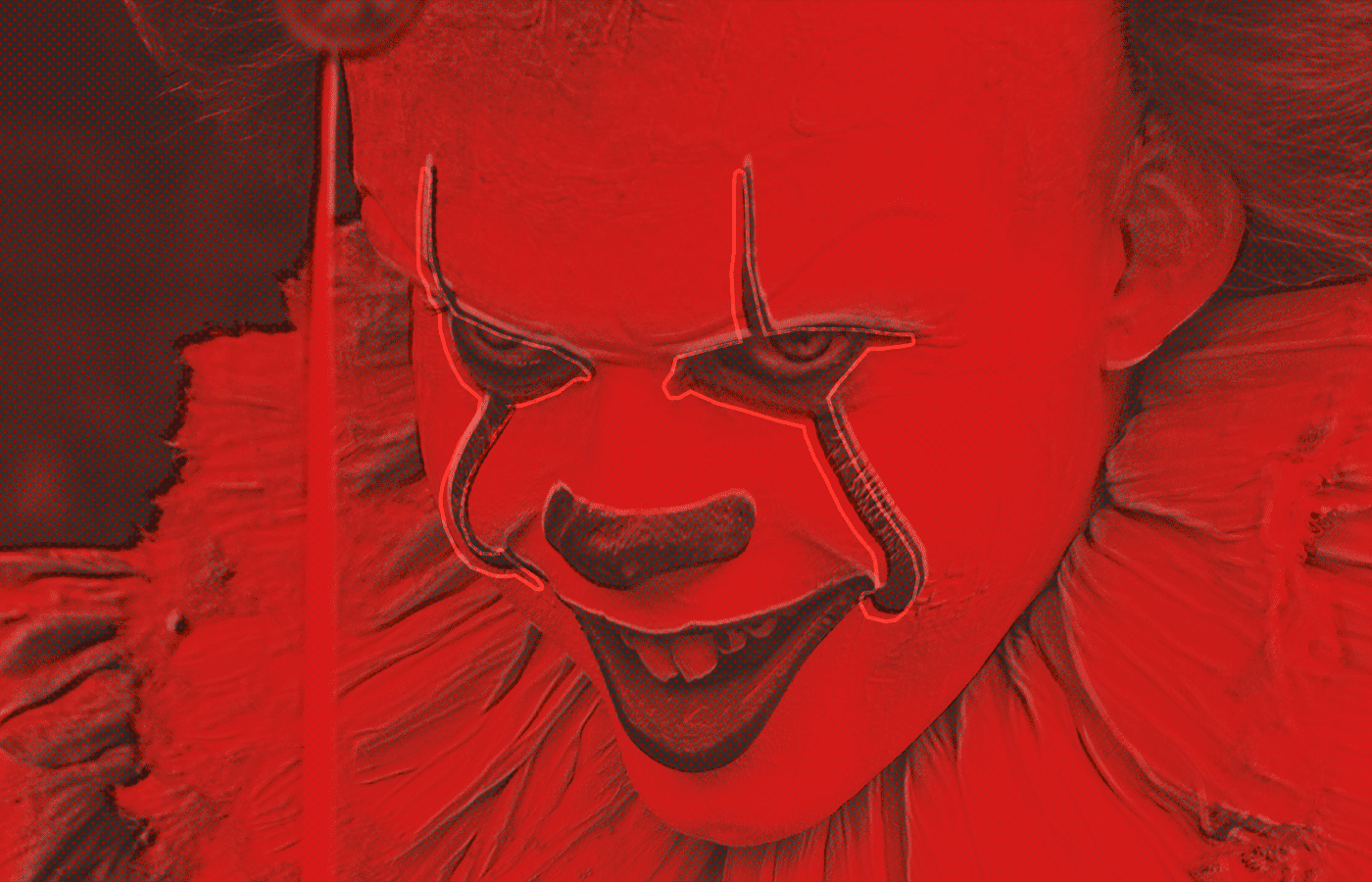 In the realm of horror movies, antagonists are written to play on the fears of humans. This also includes fears held by children. Killer clowns are one great example of this. The overexaggerated features of clown makeup are disturbing for a lot of children and adults alike. Who else remembers all of the creepy clown sightings from a few years ago?

Today, we want to look at some of the biggest invokers of fear and maybe a few that were a little slapstick in delivery. Here are some of our favorite killer clowns from popular media franchises. Enjoy!

Pennywise, The Dancing Clown (It)

Stephen King is no stranger to horror and suspense. In his stories, there are often no victims that are off-limits. In the film based on Stephen King’s novel IT, an evil clown is unleashed on the inhabitants of a small town called Derry, Maine.

That said, he is not a true clown. Pennywise is a shape-shifting entity known as The Deadlights. He decides to manipulate his form to resemble a clown to the people of Derry, and will often appear at zero provocation to terrorize or take his prey out of the fold and into the sewers. These films (either the original or the remake) and novel will take away your sense of comfort and dead to rights in the deadlights. “Would you like a red balloon, Georgie…?”

As with most gritty horror films, the Halloween season is often deadly. In Terrifier, we see the residents of a small town running into and being attacked by a very foreboding black and white circus man named Art the Clown.

Art sees their storyline pick-up in Terrifier, where he is vocally mute and voluminously violent. He could be imbued with some of the same “you can’t kill me, I’m the bad guy” energy of Jason Voorhees and Michael Myers we’ve come to know and appreciate. If you are a fan of slashers and gore heavy films, this isn’t one to miss. There is speculation that there will be more Art the clown storyline dropping fall of ‘22 with the release of Terrifier 2.

JoJo The Klownzilla And Klowns (Killer Klowns From Outer Space)

In Killer Klowns from Outer Space, we are introduced to extraterrestrials modeling their behaviors and aesthetics from clowns..with some deep-fried violence on the side. In another small town story, we have a ship transporting extraterrestrials that is believed to be Hailey’s comet. These beings feast on their human counterparts by using popcorn (clown larva) and by cocooning them into cotton candy for a refreshing drink later. This storyline has come to a stall but there is still some chatter that there may be additional films or stories to be made.

In a horror storyline curated by Rob Zombie, this character is seen with a troubled life and an upbringing in Texas. In the first movie, House of 1000 Corpses, he is seen creating Captain Spaulding’s Museum of Monsters and Madmen, and drawing tourists to see the Murder Ride and Dr. Satan.

Captain Spaulding would work in tandem with members of the Firefly family to carry out grizzly murders of tourists and those that believed the family was worth investigating. Although it’s a Zombie production, you will be at the edge of your seat for this and The Devil’s Rejects as you see this clown’s story play out. Tutti F* Fruity

To return to the world of the paranormal and curses, Clown sees a real estate agent throwing a birthday party for his son, but lo and behold, the hired help cancels. As a good father does, Kent McCoy searches and locates a clown suit in a house they are selling. However, once he puts it on, the world goes sideways. The cursed suit becomes skintight and the red nose replaces his own. The curse involved with this outfit will have you pulling for anything to stop the main character.

The horror brought to life in this movie is based on true events about the serial killer. A man with a troubled childhood and life becomes a prolific clown-turned-killer and would go on to murder many men and children. This movie (Gacy) is a dramatization based on his life that ranges from interactions with his dad that are anything but pleasant, to a failing family life and difficult relations with people he employs and associates with.

If there’s one constant feature in Gotham City that isn’t Bruce Wayne or Batman, it’s the Joker. There are a few storylines that discuss his arrival, one being that he was dropped in a vat of chemicals that left his skin burned and altered. The more recent lore alludes to the social provocation that morphed his mind.

Either route, he is methodical, cold, and always cracking a joke in even the most sinister of times. He constantly challenges Batman’s character and resolve to kill no one. It is speculated that maybe the Joker is the truly dark side of Bruce Wayne’s mind. In any event, Gotham City will constantly live in fear, so long as The Batman doesn’t break his one rule.

Violator makes his appearance within Todd McFarlane’s Spawn universe attempting to groom Spawn (Al Simmons) into doing the hell army’s bidding against mankind and the army of Heaven. Violator believes mortals are extremely weak and has no need to resist harming and killing them. Although this clown form may look like a tub, Violator’s true form see’s the face painted individual being a true weapon of wrath.

American Horror Story is one of the most famous horror TV shows of all time. Twisty The Clown made an appropriate appearance within season four of American Horror Story season 4, Freak Show. Twisty as an infant was dropped on his head which caused mental disability. When he was grown up and performing as a clown, his teammates spread rumors of inappropriate relations.

He would eventually attempt to take his own life but would remain alive. Twisty believes he is liberating children from mean parents that only give chores and deny candy, but his method of freeing the children is extremely gruesome and he leaves blood in almost every setting he is a part of.

In another entry from Rob Zombie, The Heads appear in the movie “31” and are anything but pleasant entertainers. A group of carnival folk is captured and forced into a game called 31, where they must survive The Heads in a maze-like environment for 12 hours.

They are spectated by a group that appears to be early Victorians who place bets on the events and participants. The Heads are effective at ensuring that outside groups playing 31 do not go on to be victorious, with the Victorian spectators helping to ensure that stays true, but small odds are still great enough for some characters to change a storyline.

RELATED: Extreme Cinema – The 40 Most Disturbing Horror Movies Ever Made

Who Are Your Favorite Killer Clowns In Media?

We hope you enjoyed our list of the best killer clowns in the media. Did we miss any of your favorites? Let us know on social media!