Fabricating The World Of Theme Parks With David Hyde (Interview) 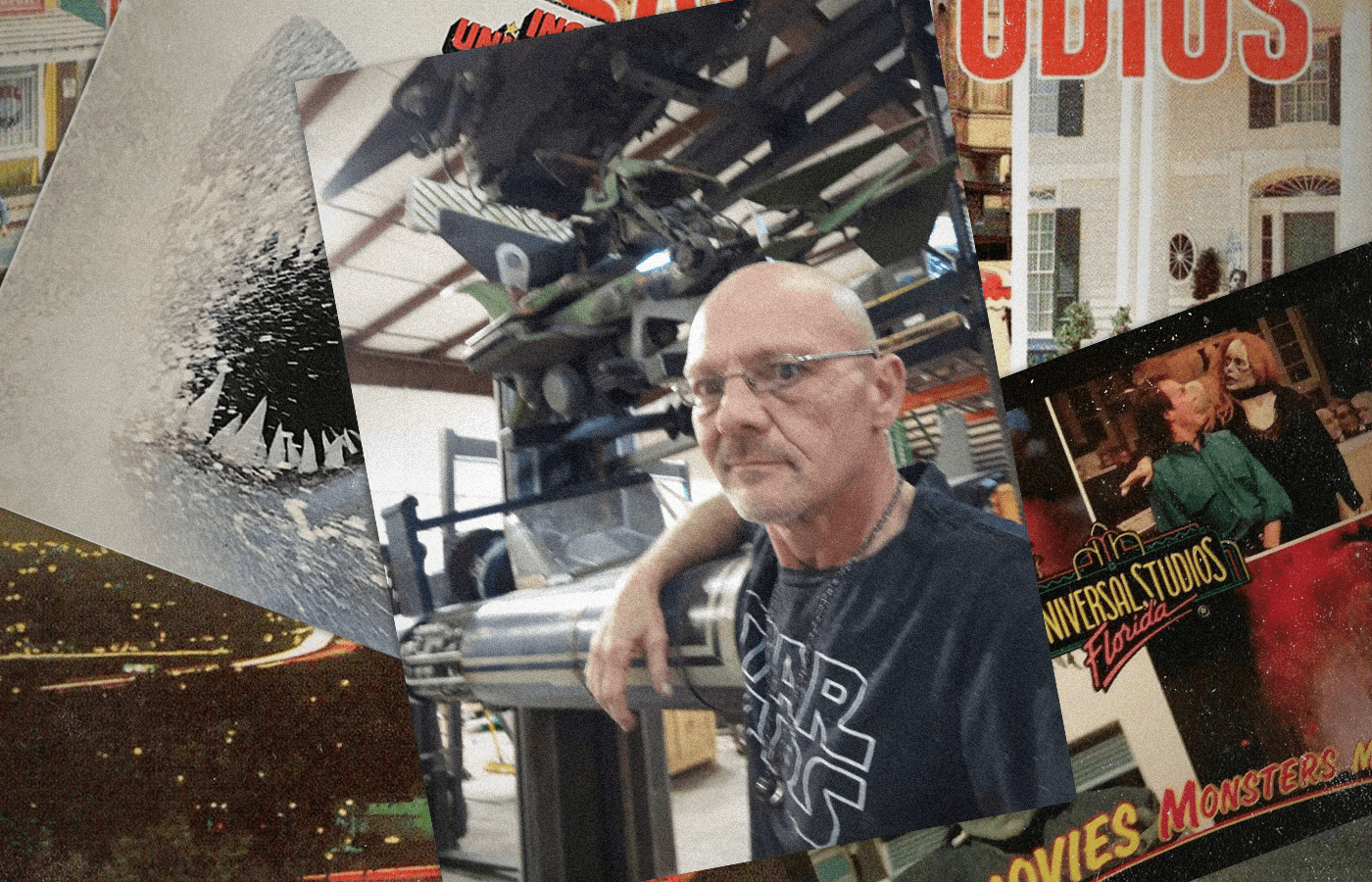 In the past few years, theme parks such as Disneyworld and Universal Studios have created more and more ambitious ways to recreate the settings from fictional worlds such as Harry Potter and Star Wars. But one aspect that no one talks about when we enter these amazing areas is who exactly built the many props and scenery in the first place.

Today we are talking to the amazingly talented prop maker David Hyde, who has frequently built amazing props used at both the Disney and Universal theme parks and even helped create the immersive horrors of Universal’s Halloween Horror Nights. We break down the common roles of a prop designer, the early days of Halloween Horror Nights, and advice for any future prop designers out there. Enjoy!

Hey Dave! Thanks for allowing us to interview you! Care to tell our readers who you are and what you do?

My name is David Hyde. I’m a professional scenic artist, designer, and fabricator for the general entertainment industry. That basically means I build a lot of different things for a lot of different people. Much of my work can be seen in the local theme parks here in Orlando in areas such as the Wizarding World of Harry Potter at Universal Studios and Star Wars Galaxy’s Edge at Disney.

The term ” prop” can be used to generally describe an item that helps set a mood or tell a story. It can be parts of a costume like a Ghostbusters proton pack or a vehicle like the Batmobile. It can be something as simple as a painting hanging in the background or the focus of an entire series of movies like the One Ring. As a prop maker, it helps to have skills in a variety of areas because the nature of the job is flexibility. The ability to use whatever materials necessary for the project at hand.

RELATED: Revisiting Back To The Future The Ride

Some of your major work includes working on Universal Studios Orlando’s Halloween Horror Nights events since it started as Halloween Fight Nights in 1991. What was it like working in the early days of the events and how it has changed up until today?

For the first year of HHN (Fright Nights), there were few resources. A crew built the maze in the old Jaws queue. I and a very talented artist and friend Jennifer Mayfield made heads, arms, legs…dozens of bodies, and body parts. Some to dress the set with and some to be used by the scare actors. We did the bulk of the work in my garage shop at home as there wasn’t yet a site on the property.

Though at the time nobody was really certain it would become an annual event those parts were stored and reused for years afterward. Over the years the event has grown, expanded to two parks, shifted parks, and run through a variety of themes and layouts. My last involvement with HHN was in 2012 though I have attended since then.

Speaking of Universal, you have worked on other projects such as working on Hogsmeade in the Wizarding World of Harry Potter section of Islands of Adventure. What are some of your favorite memories working for Universal?

My HHN experience was mainly through the Entertainment dept. While there I also worked with the design department making things like the animal on the clock tower in the Curious George land, the wall of weapons at MIB, the various corpses that populated the Sindbad stunt show, and much more. I transferred to Universal Creative (which is kind of like Universals Imagineering group) when we built the first Wizarding World and again when Diagon Alley was in its early construction phase through its opening, props for the King Kong queue, and prototypes for the Nintendo Park.

You have also worked for Disney as well, specifically the Star Wars: Galaxy’s Edge within Disney’s Hollywood Studios. How would you describe your experience in bringing the world of Stars Wars to life for general audiences?

Personally, I felt I had the best job on the Galaxy’s Edge project. While there were teams of people working on the rides. The Millennium Falcon, the X-wings, and so on…the icon pieces. I was charged, along with my crew, with filling all the stuff in between. Making the walls and shelves come to life with details. There’s no place you can stand in GE that you can’t see something that our shop made. And almost 100% by hand.

A lot of materials were repurposed from other closed venues like the Great Movie Ride and the Lights, Motor, and Action stunt show. And we were building for two parks as Disneyland was opening their Galaxy’s Edge a few months before the Orlando one. Everything had to be made twice!

RELATED: Everything We Know About Halloween Horror Nights 31 So Far

What would you say are the biggest challenges of being a professional prop maker?

Some projects are simple one-off items that only need to be used a couple of times. But sometimes you get a big multi-prop job such as a shop interior that’s full of many different things. In Diagon Alley, for instance, the Wiseacres Wizarding supply shop has a balcony filled with magical astronomy props. Or the Toydarian ToyShop in Galaxy’s Edge has display shelves and hanging ceiling displays. All these pieces were designed and built by me. The challenge with these kinds of sets is making everything look like it wasn’t all designed and built by the same person. Follow patterns when you need to but learn to break those patterns when necessary.

Thanks to the advent of the internet, many artists are creating and sharing their own props for either cosplays, independent productions, or homemade artwork. What advice would you give to aspiring prop makers?

My advice to anyone starting out is to stay current with technology but find a hands-on skill… painting, sculpture, metal, or woodwork, that you can bring to the table. Practice it till you own it. I don’t 3-D print a lot mainly because I don’t have to but I know how much it currently rules the industry.

We also gotta ask what are some of the coolest creations you have made over the years.

Some pics of my favorite personal pieces from both Universal and Disney.

Thanks again for chatting with us Dave! Please tell our readers where they can find your work!

I have things all over the parks in Central Florida but the greatest concentration can be seen at Universal Studios and Islands of Adventure…the Harry Potter areas, and Disney Hollywood Studios….Star Wars Galaxy’s Edge.