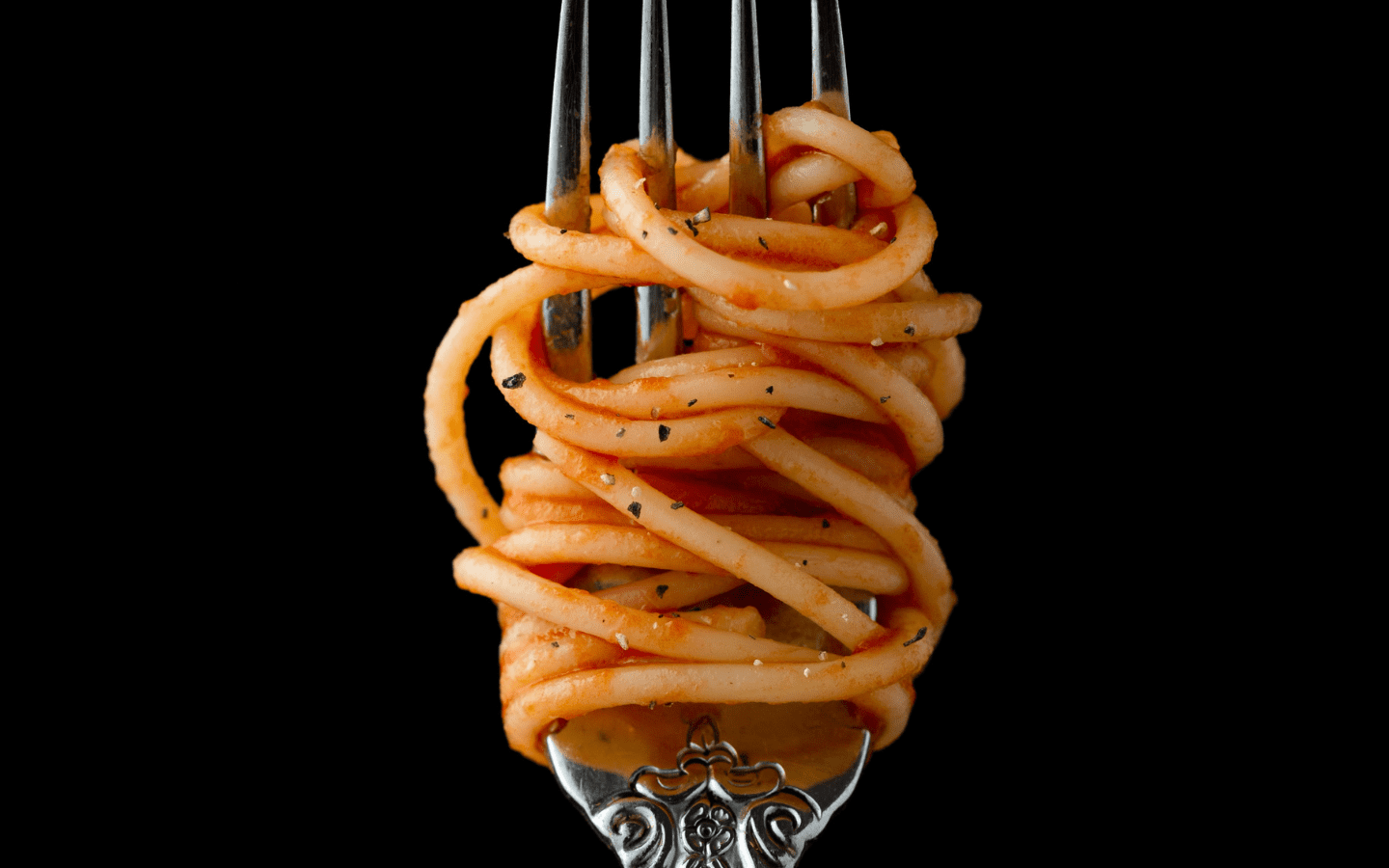 Did you know that there are over 300 pasta shapes? That seems im-pasta-able! Long pasta, short pasta, stuffed pasta, and the list goes on and on. Some shapes and sizes are better for holding sauces, while others are better for baked dishes. Whether dried or fresh, boxed or homemade, pasta plays a big role in our diets. Let’s take a look at some of the most popular types of pasta. Let us know your favorites on social media.

We will start with the long pasta including spaghetti, bucatini, angel hair, fettuccini, linguine, pappardelle, tagliatelle vermicelli and lasagna.

The ever-popular spaghetti or “little strings” is a classic with its long, round, shape. Originally, spaghetti measured about 20 inches long! Imagine trying to fit those boxes in your pantry. Now spaghetti is about half that length. Much easier to fit in the pot. It pairs perfectly with sausage or meatballs. Don’t forget the Parmesan.

Bucatini is the celebrity look-alike of spaghetti. It is thicker and has a hollow center that runs through it. It’s kind of like a pasta straw! Bucatini is ideal for holding all the extra sauce. The name originates from the Italian word buco, meaning “hole.”

Angel’s Hair Pasta is my personal favorite. Also known as capellini, or “fine hair,” it is thinner than spaghetti, it is a splendid choice to pair with a lighter sauce. Anything too heavy or chunky will overwhelm this delicate ambassador of the long pasta.

Someone flattened out the spaghetti! This dense, thicker noodle is flat, like “small ribbons”. Coincidently, that’s the Italian translation. It combines well with a meat sauce but, come on, we all know its true purpose is to be tossed with a creamy alfredo sauce. Mmmmmm…

Linguine, pronounced “lin-GWEE-nee”, is not quite round like spaghetti but not quite as flat as fettucini; it is more elliptical in shape. The name linguine means “little tongues” in Italian. Still great with the rich creamy sauces but throw in some seafood to make it extra special. National Linguine Day occurs on September 15th every year.

Pappardelle is Fettucine’s fatter cousin. Pronounced pop-ahr-dell, it is wide and sturdy and goes well with Bolognese. This pasta’s name comes from the Italian pappare, a verb that means “to gobble up.” Sounds like a plan to me!

It is often difficult to differentiate between fettuccine and tagliatelle. The shape of tagliatelle is long and flat while the texture is relatively rough compared with other types of pasta. It works well with a thicker meat sauce. The name derives from the Italian verb tagliare, which means “to cut”.

Lasagna is made of very wide, flat sheets. Lasagna can refer to either the type of noodle or a dish made with several layers of lasagna sheets and other ingredients like sauce, meats, and cheese.

Vermicelli directly translates to ‘little worms’ due to its long, thin appearance. This Italian pasta is thinner than spaghetti in the US. On the other hand, in Italy, vermicelli is actually a thicker pasta noodle than spaghetti. Please do not confuse this version with rice vermicelli. That’s a different noodle altogether. Vermicelli pasta goes well in soups and broths, as well as sauces.

Short pasta need not be ostracized for its smaller stature. Pasta like elbows, penne, rigatoni, gemelli, farfalle, orecchiette, pipe rigate, wheels, and ziti holds a place near and dear in our hearts.

Elbow pasta has such versatility! One of the most common tube shape pasta, it lends itself well to a wide variety of dishes including the chart-topping macaroni and cheese and the BBQ staple, macaroni salad.

Penne is a very adaptable pasta that can be used pretty much anywhere. It is often found paired with sauces or oils, salads, soups, and even in baked casseroles. The cylindrical-shaped pasta with angled edges is great for collecting all kinds of yumminess. From the Italian penna (meaning feather) it sort of looks like a pen.

Rigatoni is a tubular pasta that has ridges running down the length. Unlike penne, both openings of rigatoni are straight cut, not angled. Like many pasta types with grooves, rigatoni is a favorite for its ability to hold onto sauces and cheese. Not to mention, all the lovely bits that get trapped inside.

Gemelli looks like two thin ropes twisted together. However, that is merely an illusion. Gemelli is one noodle twisted to look that way. Its name is aptly derived from the Italian word for “twins”. Gemelli collects sauce well and is a popular choice for pasta salad.

Farfalle, pronounced far-FAHL-ley, has nothing to do with bow-ties! Though with its zig-zag edges and crimped center, it certainly looks like one and is commonly referred to as the bow-tie pasta. Farfalle is “butterfly” when translated from Italian. From sauces to casseroles and salads this functional pasta is another example of one that can do anything.

Orecchiette, say oh-reck-ee-ET-tay, literally translates to “little ears” and it sort of looks like that. A small oval pasta with a slight dome shape, the center is thinner than the edges. This gives the pasta an interesting, variable texture.

Pipe Rigate is pronounced pee-pee ree-gaa-teh and if you like elbow macaroni, you will want to experiment with pipe rigate. A fun, curved pasta that looks like it could house a snail, it has a wide opening at one while the other is flattened and mostly closed. Thanks to this shape pipe rigate can capture all kinds of sauces and liquids.

It’s the invention of the wheel – wagon wheel pasta, that is. Also called rotelle or “little wheels” in Italian, this is a kid favorite. Close in size to a quarter, this fun shape lends itself well to both cheese and tomato-based sauces.

Who doesn’t love a baked ziti? Similar to rigatoni, ziti is a pasta that has a couple of definitions. It can be the pasta itself, tubular in shape, may have ridges, and is about one to two inches long. It can also refer to an Italian-style baked casserole, not totally unlike that lasagna we mentioned earlier.

While not technically pasta, Gnocci is routinely served similarly so we are including it here. Most gnocchi uses potatoes as its base. They are light, tender, and airy. The word “gnocchi” is derived from the Italian word “nocchio,” meaning a “knot in wood.” Is anyone else getting Pinocchio vibes here?

Moving on to filled or stuffed pastas. Oh, that pasta-bilities! From ravioli to agnolotti, cappelletti to tortellini, and manicotti to cannelloni, stuffed pastas are so worth the work (or the wait).

Ravioli is the most well-known stuffed pasta. They are typically made by putting a filling (usually some form of cheesy goodness) between two sheets of pasta. They are cut into squares or sometimes circles. The word ravioli is derived from the Italian word riavvolgere meaning “to wrap”.

Agnolotti is a type of ravioli. However, it is made from a single piece of pasta. The pasta is folded over to form a rectangle. Typically filled with meat and vegetables, they are a special little package of goodness.

The word cappelletti means “little hats,”. The shape of this filled pasta looks like a tiny hat. Formed from a piece of dough, it is filled with meat, folded over, and the ends pinched together. Traditionally, they are served in broth.

Tortellini is a lot like cappelletti and is recognized for its distinct ring or navel shape. Often filled with meat or cheese, it is commonly served in a broth. They tend to be on the smaller side. Legend has it that the shape of tortellini is meant to mimic the navel of the goddess Venus. That sounds pre-pasta-rous!

Tortelloni is torellini’s big brother. This keyhole-shaped pasta is larger in size, and often hold ricotta cheese, leafy greens, or pumpkin. Frequently served with a sage and butter sauce they can also be served with a variety of sauces like marinara, pesto, or a cream sauce. Oh, and they are most often vegetarian.

Manicotti is like jumbo penne noodles with the same texture and shape but much larger. The word translates to “little sleeves”. Bigger, in this case, is better. With more space to stuff a tasty cheese filling, these beauties are a showstopper when paired with a flavorful red sauce and baked.

Cannelloni, Italian for “large reeds,” are where lasagna meets manicotti. Cannelloni starts as a sheet of pasta, is filled, and then rolled up like manicotti. As a rule, it is topped with a sauce, and baked.

What Are Your Favorite Types Of Pasta?

That sums up our breakdown of different types of pasta. Because pasta is so versatile, it can lend itself well to a variety of flavors to meet all tastes and moods. The goal of every human being should be to explore all the pasta-bilities. Eat heartily!