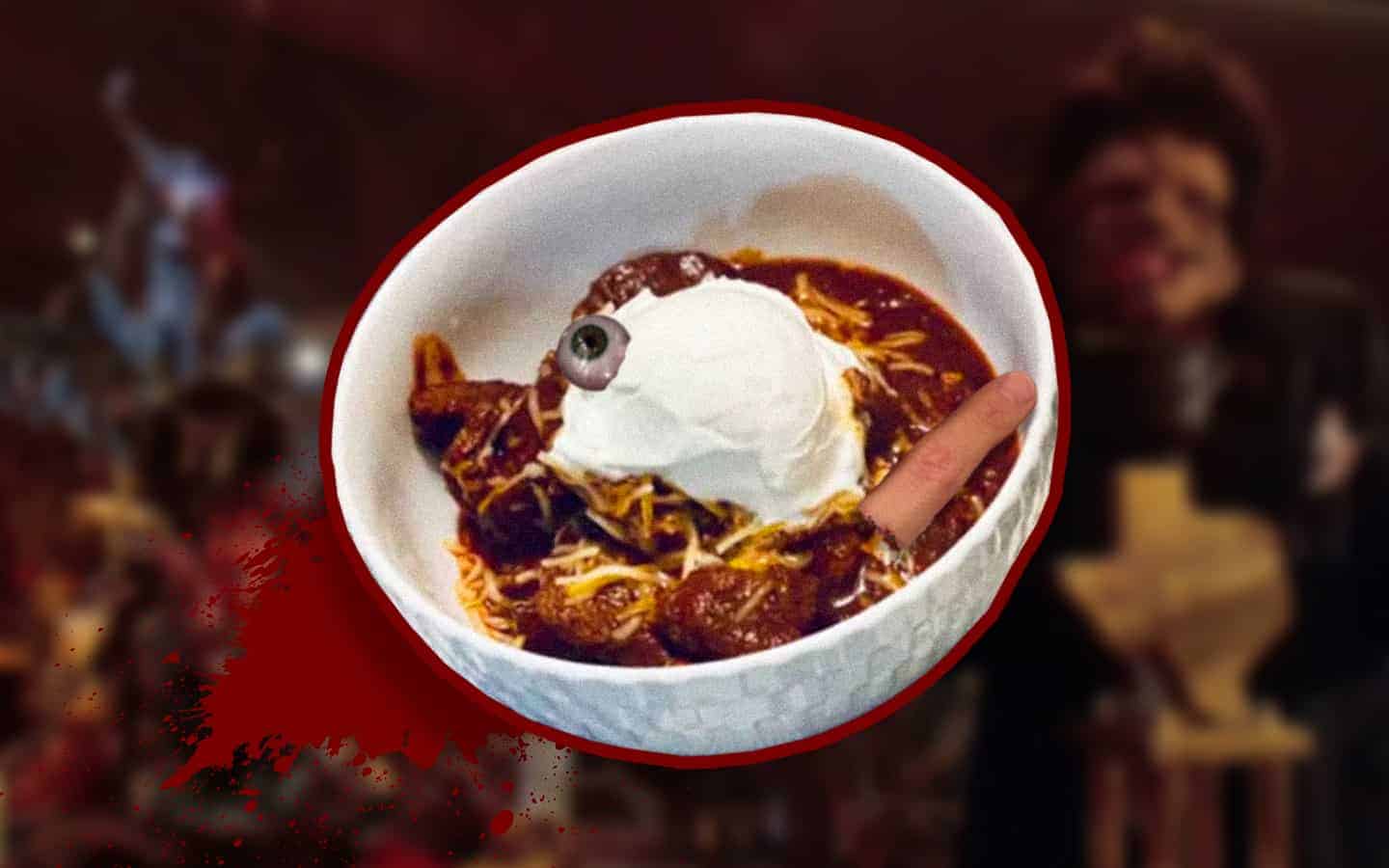 In The Texas Chainsaw Massacre, the patriarch of the Sawyer family, Drayton Sawyer, is a cannibal that can make a mean bowl of chili! Drayton’s original chili recipe is presumed lost in the Muerto County sheriff’s department evidence room fire back in 1973. Drayton decided it was best if he committed to memory.

Only to have perfected it in 1985 and went on to win the Texas Oklahoma chili cook-off twice. It was believed that Leatherface actually carried on the tradition of making the chili as an homage to Drayton’s legacy. It is believed that this is that same recipe. Tweaked over the years but at the core, it still has the same bones or hardshell peppercorns as Drayton use to say…

Place the chiles in a straight-sided large skillet over medium-low heat. Be sure not to crowd the pan, you need to do this in batches. Toast the chiles until fragrant, flip chiles, and repeat on the opposite side. Careful not to burn them as they will get bitter. The process will take 1-2 minutes. Transfer the chiles to a large bowl and soak chilis in hot water until soften.

Drain off excess water from chiles; deseed them and remove stems ( it’s okay if you can’t get them all). Place the chiles in a blender and add the cumin, black pepper, 1 tablespoon salt, and 1/4 cup water. Blend until the mixture until smooth, adding more water as needed. Once the chiles will take on a paste consistently, set aside.

Place a skillet to medium-high heat. When it begins to smoke, swirl the skillet add half of the flesh. Lightly brown on at least two sides, just a couple a minutes per side. Transfer flesh to a bowl and cook the other half of the meat on both sides and transfer to a bowl, reducing the heat on the skillet.

Return heat to medium-low add the onion and garlic and cook gently for 3 to 4 minutes, stirring until onions turn translucent. Add the stock, the water, and gradually whisk in the grit to avoid lumps. Stir in the reserved chile paste, scraping the bottom of the skillet with a spatula to loosen any browned bits. Add the reserved flesh (and any juices that pooled in the bowl) and bring it to a simmer. Reduce heat and cook for about 2 hours, stirring occasionally until the flesh has turned tender.

Once tender add in the brown sugar and vinegar thoroughly and season to taste. Allow additional simmering for 10-15 more minutes. It may appear that there is too much sauce at this point but that’s okay. Turn off heat and allow chili to stand 30 minutes. If chili is too dry add more stock to balance out your sauce.

Check seasoning one last time, once satisfied you’re ready to enjoy a big ole bowl of Texas Red! For more on my thoughts about the Chainsaw franchise check out the Kill the Dead Podcast episode The Texas Chainsaw Massacre (2003)!