Eiji Tsuburaya’s Influence On The Origin of Godzilla

Godzilla’s cinematic storytelling also extends to the film's design, which is due in part to special effects legend Eiji Tsuburaya. 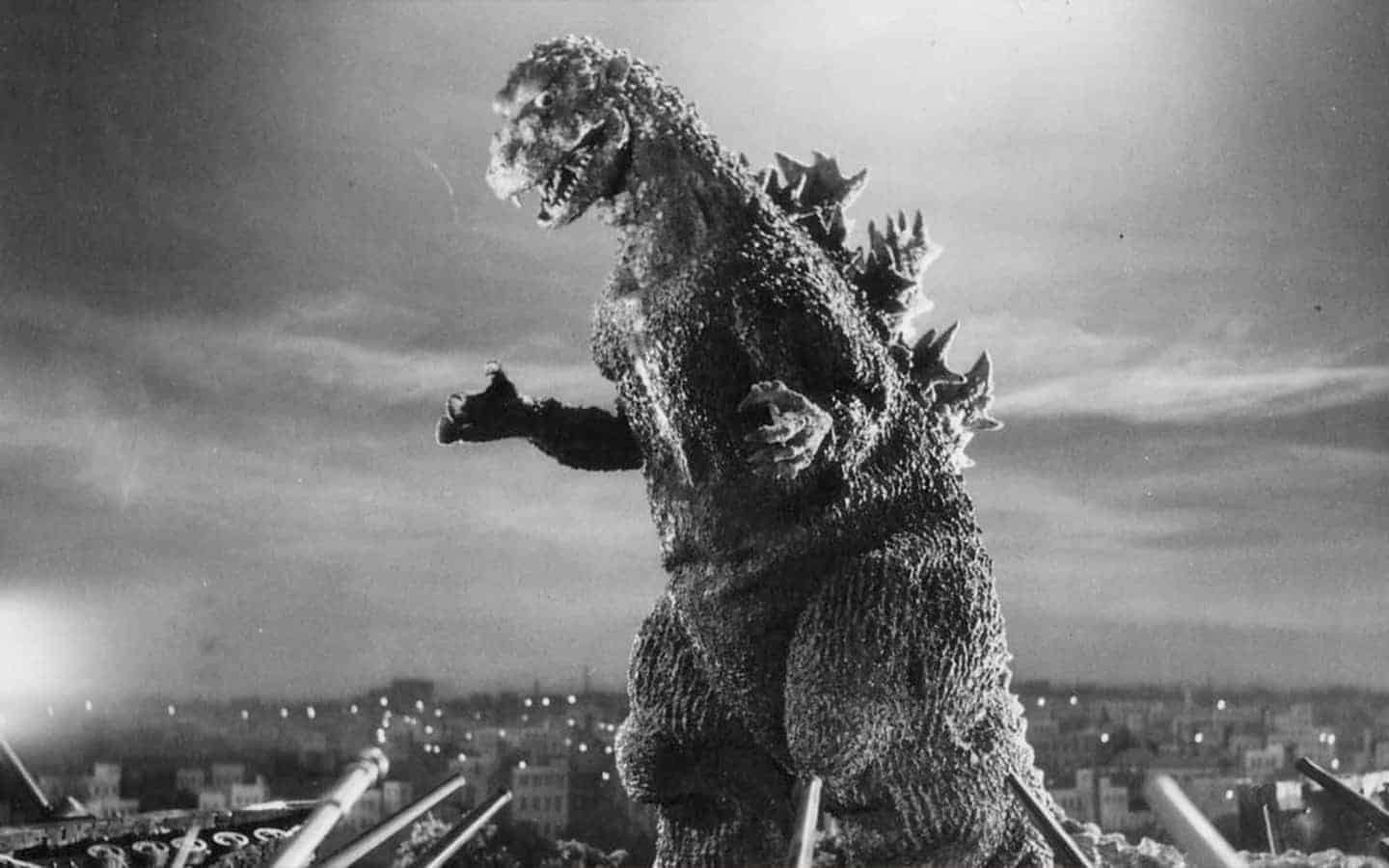 1954’s Gojira Directed by Ishirō Honda is one of if not the most influential monster movie ever made, and believe me when I say that despite the association contemporary audiences may have now with the giant monster, it was a horror film – at least for Japanese audiences.

Gojira (Godzilla) was a cathartic release for Japan post World War II, a meditation on Japan’s place in the world, and it raised important questions regarding humanity’s ethical responsibilities in the atomic age. What’s often overlooked, though, is that Godzilla’s cinematic storytelling also extends to the film’s design, which is due in part to special effects director Eiji Tsuburaya.

What Is Godzilla Based On?

Eiji Tsuburaya began his film career as an assistant cinematographer in 1919. From there he worked at various production companies until he landed a full-time career as a cameraman at Shochiku Kyoto Studios. There he experimented with several brand new film techniques, including the first use of a camera crane in Japanese filmmaking. Soon he would find himself working for Nikkatsu Studios, one of Japan’s oldest movie production companies.

During his time there, King Kong was beginning to screen in theaters across Japan. Tsuburaya got a copy of the film reel and would watch it repeatedly to reverse engineer the stop-motion effects. Eiji Tsuburaya would also begin to experiment with front and rear projections. Just like Ray Harryhausen, Stan Winston, and many others inspired by the film, Tsuburaya’s personal connection with it would result in a lifelong love of monster making.

In 1936, a series of production companies, including Nikkatsu Studios would merge to form Toho Tokyo Studios. Eiji Tsuburaya would be made the head of Special Visual Techniques, transitioning from a cinematographer to a special effects artist. One of his first jobs would be to design the company’s new logo, which has evolved to be one of the world’s most recognizable intros, standing shoulder to shoulder with Universal and Paramount.

Unfortunately, he wouldn’t be there too long though due to Japan’s involvement in the Second World War. Tsuburaya was employed by the Japanese imperial government to create a series of propaganda films, some of which were so technically impressive they were said to be used by America as actual footage of the attack of Pearl Harbor. Though it was an opportunity for Tsuburaya to gain technical filmmaking experience, the brief encounter would stain his resume. He found it difficult to find work again and inevitably founded his own production company. It wouldn’t be until the 1950’s that he would return to Toho.

In 1954, a group of fishermen found themselves near an American nuclear bomb testing site. They were out of the danger zone but the bomb had twice the anticipated power and radius. The men were stricken with rain and nuclear ash. When the fisherman returned, it was established that they and their catch were dangerously radioactive.

This resulted in a country-wide panic, and because of it nearly five hundred tons of fish were destroyed. The U.S. government estimated that 856 fishing boats were exposed to the test. This would be known as the Lucky Dragon No. 5 event, named after the first boat. Inspired by the work of Ray Harryhausen in The Beast from 20,000 Fathoms along with the Lucky Dragon No. 5 tragedy, Toho producer Tomoyuki Tanaka approached Tsuburaya regarding a new monster movie idea.

The Origin of Godzilla

With nearly thirty years of experience, a proper budget, and a team of sixty men to assist in production, Tsuburaya signed on with the intent of doing whatever was necessary to bring this new creature to life. Tsuburaya originally wanted the monster to move in stop-motion but settled instead on suitmation, a type of character design where an actor would don a full body suit with extreme hyper-realism. This would mark the beginning of the daikaiju genre in Japan.

The design of the creature was inspired by various dinosaur designs, but since Japan was still recovering from war, they didn’t have the rubber to make the suit. Instead, it was made out of a type of mixing concrete and weighed over 200 pounds. This also caused it to be a sort of makeshift oven and the character actor blacked out from heat exhaustion on more than one occasion. Stories from onset have confirmed that at the end of every day, the team would have to drain a full cup of sweat from the cotton lining within the suit.

As for the set design, Tsuburaya took advantage of camera angles and miniature sets to create the illusion of a giant creature. He first photographed areas in Tokyo and obtained building blueprints when he could, then diligently recreated the city from scratch at 1:25th scale. The team would meticulously examine every small detail, from electric poles down to the hand-lettered signs strewn across buildings.

Explosives were hidden inside the models to simulate the creature’s fiery breath and were even used on set with the character actor, often putting him in danger. It took 30 to 40 workers from the carpentry department to build the scaled-down version of one of the cities featured in the film. And when a shot wasn’t right and needed to be redone, the special effects team was tasked with recreating the destroyed set nearly identically.

If done in stop motion, it could have taken seven years to make but by using suitmation, production only took seven months. Tsuburaya won his first Film Technique Award for Godzilla and from there, his resume only blossomed. During his 50-year career, he worked on approximately 250 films in total – including Mothra vs Godzilla, Ghidorah, the Three-Headed Monster, and War of the Gargantuas. That’s also not including his creation of the Ultraman series.

One of the largest debates in film communities lately is Practical vs Digital Effects and it’s fairly easy to understand where people are coming from. On one side, there’s a long-practiced live-action art form that is slowly being taken over by something that’s often less than believable. And on the other side, when the digital effects are good, they accomplish what would be impossible, or at least prohibitively expensive, to do on set.

Cheaper and easier software means that practical effects are slowly falling out of fashion, but genre enthusiasts seem dedicated to the craft more than ever. Tsuburaya spearheaded contemporary Tokusatsu or Japanese special effects unlike anything seen previously. Even today, his legacy resonates with production companies across the world and the techniques he pioneered can be seen within western blockbusters.

Japan is still utilizing many of these systems in tandem with digital effects, search for a symbiosis between them. There’s no sense making something fully digital when it could look just as good, if not better, practically. But that’s not to say we should get rid of digital effects completely.

One of the most recent examples of this being used is in Toho’s Shin Godzilla, which utilized detailed model and suit techniques with digital tweaks that made the monster seem more alive than ever. An example from the dawn of the digital age that borrowed heavily from the Kaiju genre, the original Jurassic Park, had only 63 visual effects shots in the whole film. It relied on practical effects in closeup to set audience expectations, then switched to computer shots so our brains could fill in the details they already “learned,” making up for any unreality associated with digital effects.

Kaiju films and monster movies are more than men in rubber suits stomping on cardboard buildings. A lifetime of craftsmanship passed down from years of learning has culminated in an ever-evolving art form that still informs how we create films to this day. Tsuburaya’s impact is as relevant today as Ray Harryhausen’s and Stan Winston’s. I’ve really only scratched the surface to introduce you to the art form, now it’s up to you to find the beauty in it.

What is Godzilla About?

American nuclear weapons testing results in the creation of a seemingly indestructible beast. Dr. Daisuke Serizawa (Akihiko Hirata) and team seek a way to get rid of the infamous Gojira anyway possible while saving Japan in the process.