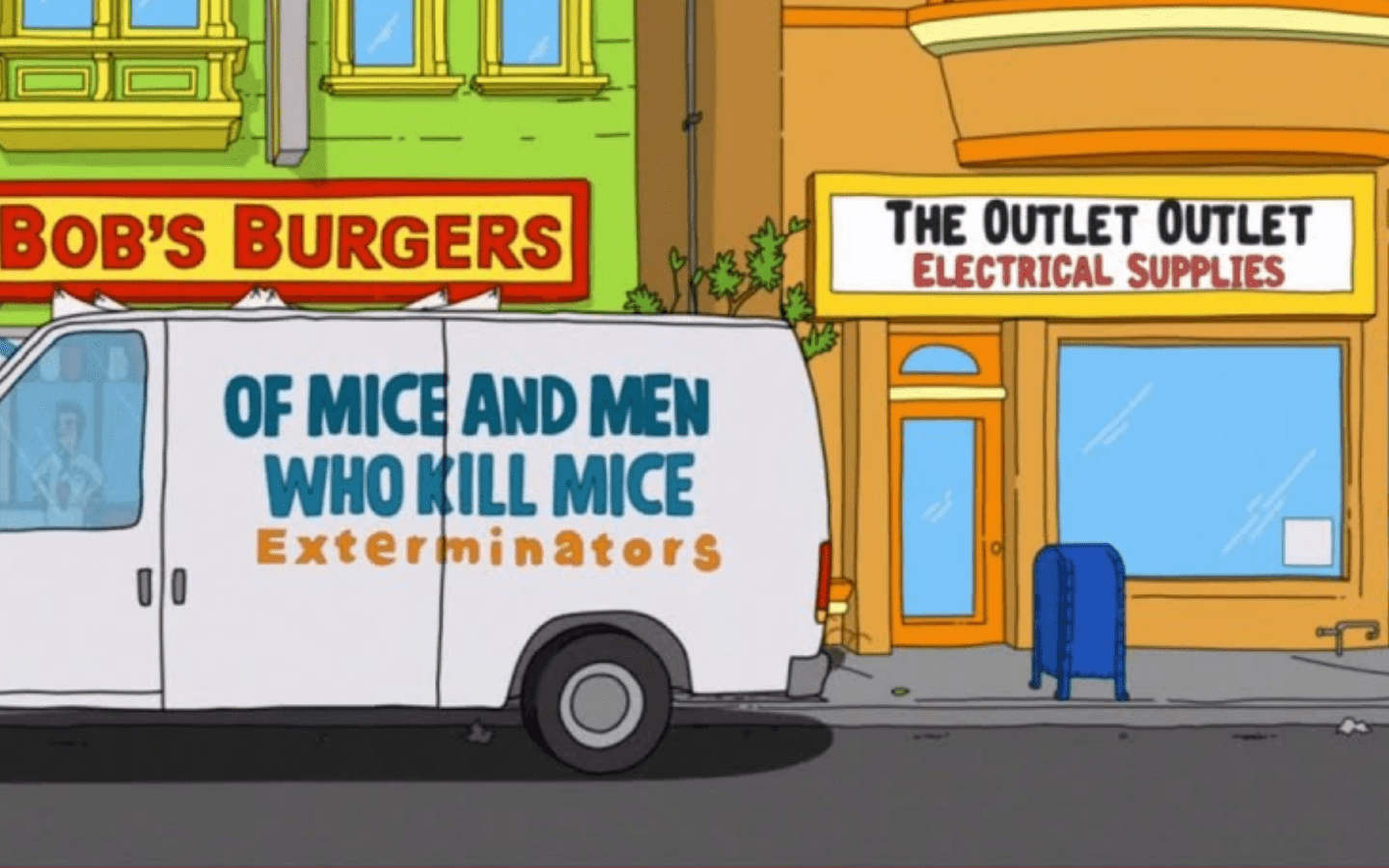 This is a play on words for the multiple meanings of the word ‘outlet’. You have outlets in your walls that provide electricity, and outlet stores that offer clearance goods.

This store’s name is a reference to the crime ‘resisting arrest’. I wonder if this sleep therapist was successful? ‘Resisting A Rest’ kind of puts the blame on the clients. I don’t see people liking that idea much.

This is a great horror-themed store for the season 6 Halloween episode. It is an homage to the department store Bed, Bath, And Beyond. That said, who wants to decorate their bathroom red? Most people use chill and calming colors for their bathrooms. Red is a bit aggressive, especially with the activities that take place there.

This is a play on the double meaning of the word ‘pad’. Pads can refer to the feminine hygiene product. It is also a slang term for an apartment. I think the idea of a realtor only selling large apartments is pretty cool. No studios here!

This is a reference to the common phrase ‘you’re missing the point’, used when someone doesn’t understand the meaning of something.

Bidets And Confused: Bidets For Beginners

This store’s name is a reference to the fairy tale phrase “Happily Ever After”. Do you think this is just marketing? Or does this casting agent only book actors for fairy tale and fantasy television shows and movies?

This is one of my favorite store next door gags. I am a grown adult and still think finance is very boring. I can’t imagine kids being interested in escrow. In general, escrow is money that is held during a contract that is not released until certain contractual conditions are met.

This store is a reference to the 1984 movie Footloose. The film stars Kevin Bacon, Lori Singer, Dianne Wiest, and John Lithgow. It tells the story of a town that has banned dancing, and the people trying to get the law abolished.

The hilariously-named accessory ‘fanny pack’ is a small purse that is worn around the waist like a belt. This is actually brilliant marketing as I believe the elderly are the only people who use them regularly.

This is a deep cut. ‘I Think Therefore I Am’ is a famous quote from philosopher and mathematician Rene Descartes. The quote was meant to prove human existence. You must exist if you are able to think about your own existence. I don’t know what that has to do with preserves, but I have a feeling this store owner is pretty nerdy.

The Way We Grrr: Dog Trainers

‘The Way We Were’ was a 1973 drama movie starring Barbara Streisand and Robert Redford. Barbara Steisand also sings a song of the same name on the soundtrack. The film tells a Romeo and Juliet-esque story set just before World War II.

Regret Me Not Tattoo

This is a play on the phrase ‘forget me not’. Many people end up regretting their tattoos. This tattoo parlor wants to make sure you are certain before they give you some ink.

This is a funny homage to the Journey song ‘Don’t Stop Believin”. The issue here is that you want people to stop bereaving. You don’t want them to be sad forever…or do you?

Get Off My Back: Tramp Stamp Removal

If you tell someone to ‘get off your back’, you want them to leave you alone for a while. Tramp stamps are a type of lower back tattoo that was once popular but are now seen as somewhat cringy. Many people want their tramp stamps off their back.

Boob jokes! Bob’s Burgers loves to slip a couple of dirty puns into the storefronts every season.

In 1995, hip hop group TLC dropped one of their most famous songs, called ‘Waterfalls’. This song is track eight on the group’s second album ‘CrazySexyCool’.

100 Cent Store is a play on dollar stores, shops where everything is a dollar. This gag was placed her because it was Bob’s Burgers’ 100th episode.

What Are Your Favorite Bob’s Burgers Season 6 Store Gags?

We hope you enjoyed our list of every Bob’s Burgers season 6 store gags. Which one is your favorite? Let us know on social media!

Bob’s Burgers tells the story of a family-owned burger restaurant trying to get by, usually with hilarious consequences. Bob is trying to support his family, which includes his manically-optimistic wife Linda, his socially inept teenage daughter Tina, his creative and silly son Gene, and his mischievous younger daughter Louise.