Forbidden Planet set a high bar for all science fiction in film and television. 65 years later and we're looking back on why it's still an incredible piece of genre media. 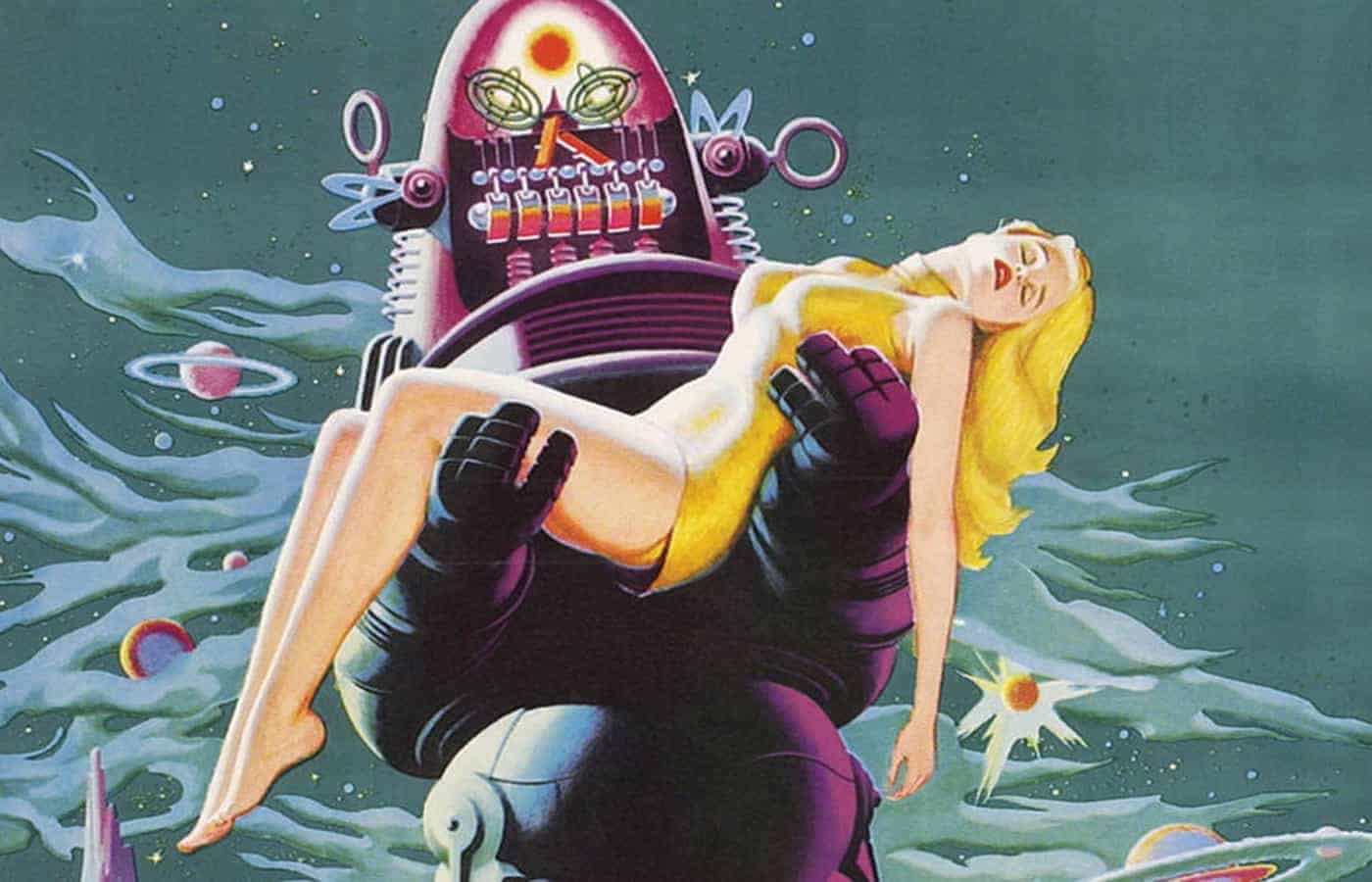 Forbidden Planet (1956) set a high bar for all science fiction in film and television.

From the very beginning of its production, Forbidden Planet was meant to be unlike any “spaceman movie” that had come before it. Granted, it centered around an all-white, all-male crew of a starship exploring the cosmos. It had a space monster too. At first blush, it might not seem so different from the likes of The Angry Red Planet or Flight to Mars.

However, when we make a deeper examination of Forbidden Planet, we discover that it possesses far more strengths than weaknesses. The filmmakers favored high quality production value and strong storytelling. Which is evident only minutes into the movie when we first see the starship C-57D zooming towards its destination, Altair IV, at faster-than-light speeds. It is noteworthy that this is the first time a film ever presented a human made spacecraft moving faster-than-light.

This commitment to high production value in service of the storytelling is in part what makes Forbidden Planet an immediate classic. Many science fiction films of that era and the decades that would follow often failed to use their production assets in such a focused way, and thus were unable to propel a plot built on a foundation of concept rather than thrills and the nationalistic fervor created by the space race.

And while Forbidden Planet is among a myriad of science fiction films from that era that focus on space exploration, it is vital that we understand the impact that it had on the genre thanks to the high standards that it set.

A Touchstone of Sci-fi Cinema

On a distant and alien world, a dashing starship commander leads his crew as they meet the strange scientist Dr. Edward Morbius (Walter Pidgeon), his robotic creation Robby and beautiful daughter Altaira (Anne Francis). All the while, a sinister monster lurks around them, eventually forcing the team to escape both it and the world it has made into its home.

Sound familiar? Possibly a pitch for an episode of Star Trek, Doctor Who, or Babylon 5?

A number of elements from Forbidden Planet would come to influence Roddenberry, including: the brash and powerful presence of Commander John J. Adams’ (portrayed by the legendary Leslie Neilson), the trio of starship officers trying to unravel a mystery with Adams in the lead, faster-than-light travel, a desolate world in need of exploration, a peaceful coalition of planets, and even the mention of men and women exploring the stars.

Forbidden Planet has not just inspired Roddenberry, but also George R.R. Martin and J. Michael Straczynski, both of whom have stated that this is their favorite science fiction film. Appropriately enough, Straczynski was even tasked by Warner Brothers to write a screenplay for a new Forbidden Planet film.

The connections do not end there, though. Numerous props, costumes, and even the character Robby, were reused in everything from completely unrelated movies to episodes of The Twilight Zone. It was this cash grab by MGM that created a deep fear of exploitation in Stanley Kubrick when making 2001: A Space Odyssey. Having seen the recycling of items from the Forbidden Planet production, Kubrick had everything from the 2001 production destroyed.

This included the typical teardown of sets to the destruction of blueprints, unused prints and every other possible component from the production to be destroyed. While it has been discovered that some of these items did survive, it is almost a crime against the history of film that such a thing happened. But I digress.

The ways that this movie has influenced science fiction film makers could be an article unto itself, so why don’t we move onto one of the most important aspects of Forbidden Planet?

The Evils We Take to and Find in the Stars

In the end, the monster that kills four crewmembers of the C-57D is an abstract construct. It is given an intangible form by technology from a species of extinct extra-terrestrials known as the Krell. The level of their science and technology is beyond anything humans can imagine. So much so, in fact, that Adams tells Morbius that this knowledge must be shared with Earth. Bordering on wisdom, Morbius informs Adams that our species is not ready for the near unlimited power that the Krell technology could grant us. Through two decades of research into the history of the Krell, Morbius determines that they were destroyed in a single night.

At the heart of all this super science is a device known as the plastic educator. It can enhance the intellect of anyone that uses it. Morbius himself used it briefly to double his intelligence, and it gave him the ability to build his robot servant Robby. This miracle of science can do even more: it can create anything from a thought!

Think of it. A device that could allow its user to end world hunger in an instant. Or reverse climate change. Or… any other wonderful thing you could think. However, the device has one fatal flaw. It has no safeguard against “monsters from the id.” The subconscious desires of the Krell were let loose with unlimited power and destroyed them in an instant.

And it was this same fatal flaw that slew all but two crewmembers of the colony ship Bellerophon (of which Morbius and his wife were members) when they tried to escape on the Bellerophon. With Morbius and his wife marooned on Altair IV, they started a family and he built Robby. And until the C-57D landed on Altair IV, the monster that had been born from the darkest parts of Morbius’ mind was at rest

In the end, Morbius sacrifices himself to destroy the monster that is a part of him and aids in the destruction of the Krell technology by destroying the world of Altair IV.

This monster and what it was born from contains a simple message – if we do not take care as a developing society, we risk bringing our own darker halves to other worlds and seed them within future generations.

Of course, there is hope. Morbius was willing to pay the ultimate price to save complete strangers and the only person left that he loves. He helps destroy the machines that could lead to untold destruction and chaos. He does not do this out of fear of humanity, but out of hope that someday, we will arrive at the level that the Krell society reached and learn from their errors.

Forbidden Planet is Still the King of Classic Sci-fi.

Whether it is the superb production value or the simple fact that it is a complex story told in a fun and challenging way, Forbidden Planet remains a pinnacle of 1950’s science fiction that still has quite a bit of luster. It stands the test of time as a film made during the McCarthy era and the second Red Scare, yet manages to avoid sneaking in anti-communist messages in favor of following in the footsteps of other great science fiction films such as War of the Worlds and The Day the Earth Stood Still.

While Forbidden Planet adopts an adventurous tone that many highbrow sci-fi films of that era chose to eschew, this movie is not without its serious undertones. The question of humanity overreaching into new realms through science and technology does come up before the film has run its course. As does the idea that while many of us might have good intentions, they may also come with a darker aspect that we cannot always foresee, as in the case of the eccentric Dr. Morbius.

This, of course, is all accented against a counterpoint dressed in the hope of human space exploration and the possibility that if we reach out to the cosmos in a spirit of progress, we might discover more about ourselves and possibly neighboring civilizations that dwell in other solar systems. Just like its predecessors, Forbidden Planet manages to temper a balance between a wary fear of exploring the unknown or unchecked technological progress and the hope that comes with such progress and exploration.

In the end, it is all these things that make Forbidden Planet (in my opinion) one of the greatest, if not the greatest of all vintage science fiction films. Let us just hope that if Warner Bros. does eventually remake it that they honor the spirit of this essential piece of sci-fi cinema.