While amazing forms of science have helped humanity tremendously, there are just as many uses that cause indescribable horrors. 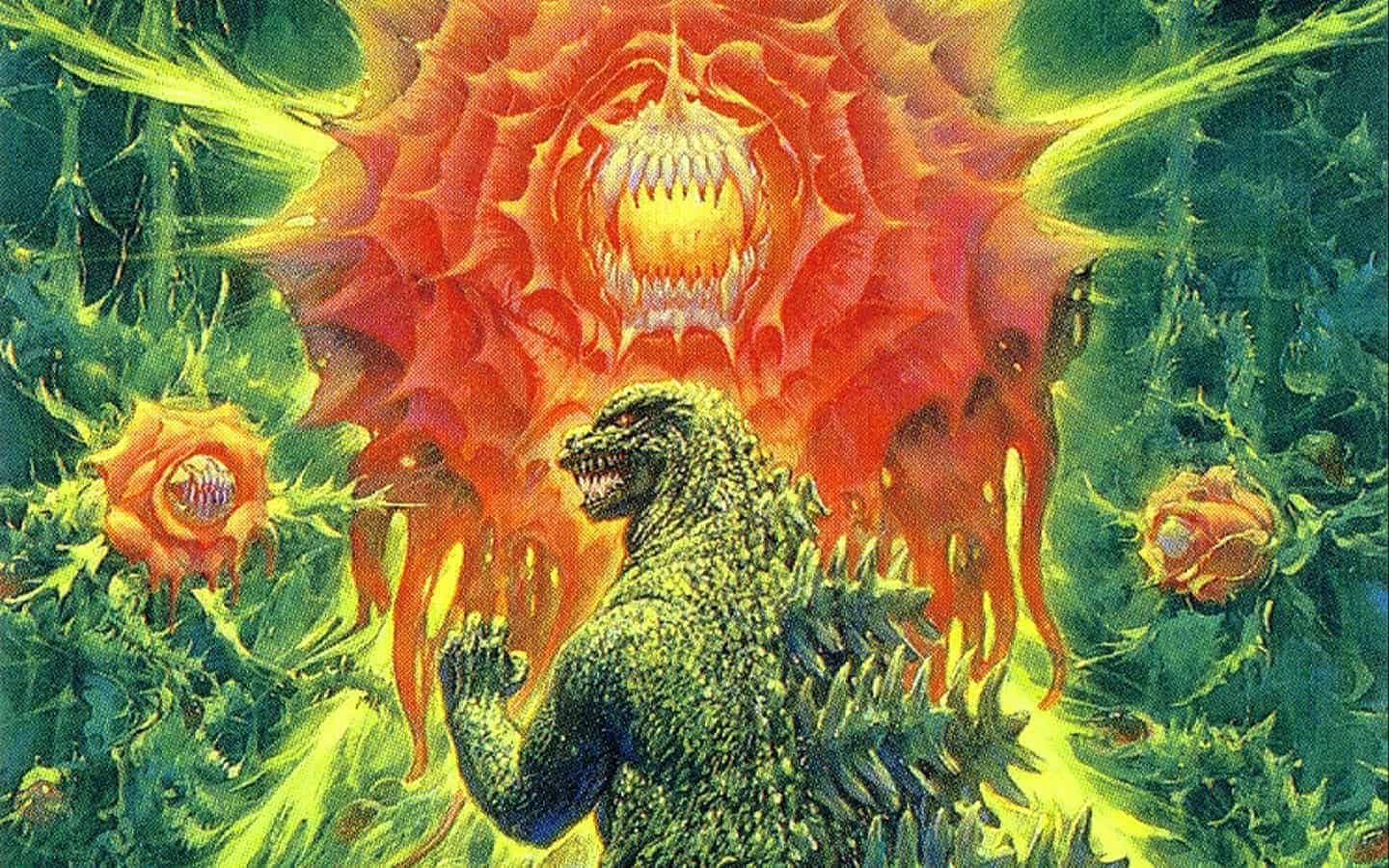 “Godzilla and Biollante aren’t monsters. It’s the unscrupulous scientists who create them that are monsters.”

In 1990, The Human Genome Project began as a research effort hoping to map out the entire human genome. It wouldn’t be until 2003 where researchers fully mapped out the human DNA sequence. Then in 2013 the United States Supreme Court case Association for Molecular Pathology v. Myriad Genetics, INC ruled that corporations cannot patent and own human genetics.

Yet many scientists have studied the capabilities of genetic engineering such as in 1996 where Scottish scientists made the first cloned mammal, Dolly the Sheep, and the ongoing “Chickenosaurus” Project by Paleontologist Jack Horner which aims to “awaken” dinosaur genes within a chicken.

It’s always interesting to see how science-fiction and horror reflect the fears and uncertainties of society at the time of release. One of the best examples of this is in the “Atomic Age”. During the 1950s many monster films reflected the fears of nuclear power, such as the Kaiju masterpiece Gojira which is a poignant metaphor of the horrors of nuclear war.

But it was around the 1990s and through to the 2000s where a new fear was asked: the ethics of genetic engineering. While scientists had found many breakthroughs in the field of genetic engineering such as life-saving medications and much heartier food, many feared what happened when a line was crossed. Many classic sci-fi and horror media spawned during this time such as Jurassic Park, GATTACA, and Okja, one film not only was ahead of its time but is a prime example of seeing these fears transitioned from the Nuclear Age to the Genetic Age: Godzilla vs. Biollante (1989).

If they play around with cells, genetic engineers might well create their own Chimera—a new life form, totally alien, totally different to what God intended for Earth.

Originally released in 1989 with directing/writing by Kazuki Omori, the 17th entry in the Godzilla series and the second in the “Heisei Era” (which is the series of Godzilla films from the 1980s and 1990s) where it follows the events of 1984’s The Return of Godzilla. With Godzilla imprisoned in a volcano, the world begins to fight over his very cells in order to advance the new world of bio-engineering.

One of the film’s core plots is when scientist Dr. Genshiro Shiragami, who is grieving the death of his daughter Erika, begins to experiment on the Godzilla cells in finding a way to “keep her alive” as he already spliced her DNA with a rose and decides to essentially make the roses immortal via the “G-Cells”.

But after a team of American mercenaries tried to steal research for the “Anti-Nuclear Bacteria” Shiragami was also working on, the now mutant rose attacks them and escapes into a nearby lake, becoming Biollante’s Rose form.

Not long after the King of the Monsters, who was released by the same US mercenaries in a ploy to threaten Japan for the G-Cells research, is drawn to Biollante as both creatures share the same genes. But once Godzilla arrives to meet his “sibling”, Godzilla battles Biollante and the rose Kaiju is seemingly killed.

But later in the film’s climax Biollante survives via spores in the Earth’s upper atmosphere and returns to earth in her much more monstrous appearance. Godzilla would battle Biollante’s final form and while he manages to defeat her again, he temporarily succumbs to the Anti-Nuclear bacteria that infected him earlier in the film and retreats to the ocean.

Sadly Dr. Shiragami is killed by another mercenary from his previous employer of the fictional country of Saradia, but not before he renounces his research as seen in both the existence of Godzilla and Biollante.

“More than just the same family…”

Despite not being a hit in the Japanese box office, Godzilla vs. Biollante would garner acclaim from both critics and Godzilla fans for its much darker approach to the franchise with the new Toho monster herself Biollante becoming a major fan favorite.

One of the reasons many consider it one of the best is how director and screenwriter Kazuki Ōmori was able to update one of the central fears that has loomed over the franchise since the original 1954 film: man playing god.

As many would know Godzilla was interpreted as a metaphor for the suffering caused by atomic weapons. And having experienced the horrors of Hiroshima and Nagasaki along with the Lucky Dragon Incident were many Japanese fishermen, who were exposed to nuclear fallout via atomic testing, Japan channeled those fear powerfully.

But with the Cold War coming to an end in the late 1980s, the fear of nuclear holocaust was becoming less and less of a concern. So it seemed right for Godzilla to evolve with the changing times.

It also helped that Ōmori wanted to elevate the series after being rebooted in 1984. But what made the film much more interesting was when Toho held a contest for the plot for the next Godzilla film (yes this happened), the winner Shinichiro Kobayashi submitted a script that commented on bio-engineering, a plot point that Ōmori gravitated towards.

“Are you proud of this?”

One of the most unique aspects of Godzilla vs. Biollante is unlike the Showa Era Toho films in which scientists are portrayed universally heroic, Kobayashi and Ōmori’s screenplay had the central scientist Dr. Genichiro Shiragami be much more morally grey.

In the film his driving goal is fueled by the grief from the loss of his daughter along with a corporate conflict over the use of Godzilla’s genetic material. This led to Shiragami recklessly creating the creature that would become Biollante.

This is very chilling as this is one of the few examples a human explicitly created a kaiju within the Godzilla franchise and Shiragami essentially opened Pandora’s Box. And with many nations within the film fighting over the use G-Cells, parallels to the nuclear race are very apparent.

In an interview with Brett Homenick of Vantage Point Interviews, Ōmori would state:

I thought that it was necessary for Godzilla films to have realistic mad scientists rather than the caricature (cartoon-like) mad scientists who appeared in many movies. In other words, my idea was to have a genius scientist, a type of scientist like a modern version Dr. Serizawa, a scientist who is much too smart.

The comparison to Serizawa from the original 1954 film is very appropriate as many have compared Serizawa to American physicists J. Robert Oppenheimer, who was instrumental in creating the atomic weapons used at the end of WWII.

Like Oppenheimer after WWII, Serizawa and Shiragami would become horrified by their creations. While Serizawa’s creation the Oxygen Destroyer would be used to stop Godzilla, Shiragami essentially made a new Godzilla with Biollante.

In a way Godzilla vs. Biollante presents the idea for every form of science, there is a monster ready to be created if we are not careful. Godzilla obviously represents the dangers of nuclear power while Biollante herself now represents bio-engineering.

In genre fiction, many creators tackle the advancement of science with both optimism and caution. For every Star Trek, there’s an Alien. The idea of the misuse of science creating monsters dates all the way back to Mary Shelly’s Frankenstein. And like Victor Frankenstein in the novel, Shiragami is blinded by his arrogance and lack of foresight that he never realized the obvious issues of merging the DNA of Godzilla with another organism.

Along with the themes of science abused through human folly, the film also points to the abuse of science via capitalism. As said before one of the film’s central conflict is many nations and companies fighting over access for the use of Godzilla’s DNA.

Dr. Shiragami himself was first employed by the fictional country of Saradia in finding ways to use Godzilla’s near invulnerability to produce heartier plants and then essentially tricked Japan to gain access to their G-Cells, claiming to be research for “Anti-Nuclear Bacteria” but tries to keep the roses he already spliced with his deceased daughter’s DNA metaphorically to keep her alive.

The film was very much ahead of its time as while bio-engineering was a new science, history has shown corporations frequently tried to patent genetic research and even genes. And it wasn’t until 2013 where the US Supreme Court made it illegal for companies to patent genes. But the fact it took nearly two decades to stop companies from patenting genetic material is very horrifying from both a scientific and existential level.

“How long have we been living in such an age?”

In the end, Godzilla vs. Biollante comes in a long line of genre fiction that suffers from the curse of foresight that many failed to see. Whether it’s nuclear energy, bio-engineering, or any other form of science, it’s clear that man’s use of it is on a slippery slope. While amazing forms of science have helped humanity tremendously, there are just as many uses that cause indescribable horrors. In the end, Biollante is simply a different shade of Godzilla.