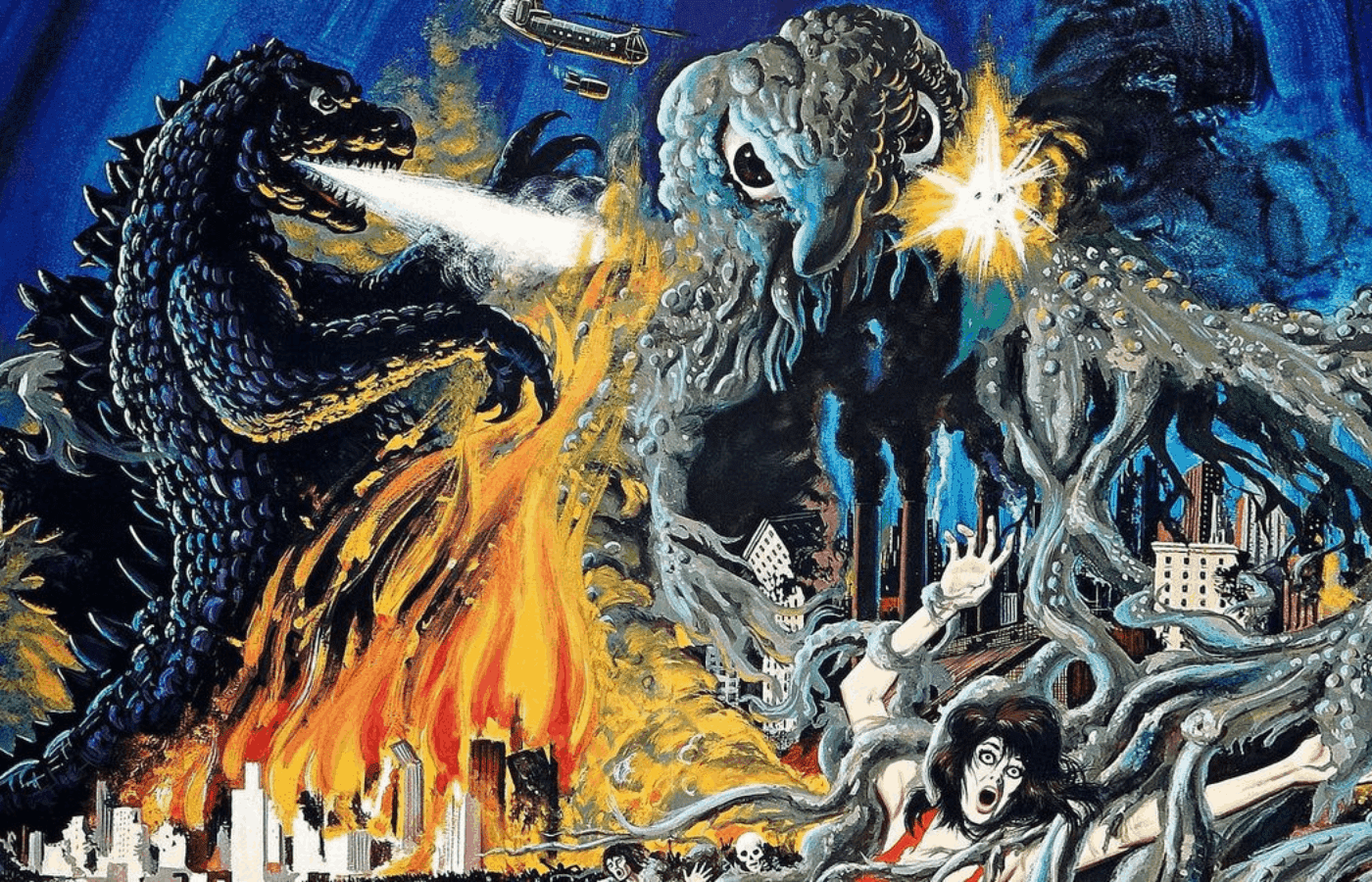 For 50 years, fans have been divided on their feelings for Godzilla vs. Hedorah. Let’s look to see if it’s one of the franchise’s best films or simply its weirdest.

Released in 1971, Godzilla vs. Hedorah (or Godzilla vs. The Smog Monster for westerners) remains one of the most iconic yet divisive entries in the King of the Monsters’ historic filmography. Sure this was bound to happen to any long-running film series, but there’s something unique about Godzilla vs. Hedorah.

With its wacky visuals, surreal storytelling, and one of the least subtle environmental themes in any film, these elements seem to either click with viewers or have them head straight for the hills.

Fans of the film see it as a surreal masterpiece of Japanese art house weirdness akin to other acclaimed films such as 1977’s House. Detractors of Godzilla vs. Hedorah, on the other hand, see the film as schlocky so-bad-it’s-good at best and is just a product of 1970s psychedelic schlock.

Still, after 50 years people are continuing to talk about it, and with Toho celebrating the film’s anniversary with various merchandise around it, it’s clearly a cult following worth diving in. As such let’s examine this anomaly of kaiju cinema and see why it’s so remembered.

The Creation Of Hedorah

Banno joined Toho as an assistant director and had worked with many veterans of Japanese cinema including the legendary Akira Kurasawa. He would eventually direct his own film with 1970s Japanese Nature and Dream which played at Osaka’s Expo 70 at the Mitsubishi Future Pavilion. The film was said to be more an audio and visual stimulant than a traditional film and drew in large crowds for its screening.

Once Tanaka got word of how Banno’s unique directorial debut became a crowd-pleaser, he decided to bring the fledgling director the helm his first major studio film with the next Godzilla film. Unfortunately, or fortunately, in some perspectives, Tanaka fell ill during production began, and as such Banno took this opportunity to have complete creative control over the film.

During this time Japan was facing severe pollution issues such as cities like Yokkaichi covered in black smog and the ocean filled with foam from dumped detergent, as such Banno wanted to address Japan’s pollution as its central theme with its antagonist Hedorah. Despite having a significantly smaller budget and only 35 days to complete the film, Banno went full steam ahead with the production.

During production, Tanaka had veteran Godzilla director Ishiro Honda drop in to observe Banno’s direction and give advice every now and then. Though it was said that during one of Honda’s visits, he walked in the filming of the infamous psychedelic dance party scene and he simply walked out without saying a word.

Once the final film was released, it was reported (though never confirmed) that Tanaka was absolutely furious over the final film and fired Banno from future Godzilla projects. It was even said that Tanaka told Banno he “ruined” Godzilla.

Despite Tanaka’s reported hatred for the final film, Godzilla vs. Hedorah would be a decent hit in both Japan and its western release. In Japan, it would gross 300 million yen at the box office and would become a staple amongst western Godzilla fans thanks to its frequent TV airings and VHS rentals during the 70s through even the 90s.

Though this is most likely due to how, to be frank, fucking bizarre the film is. Despite the simple plot of Godzilla fighting against Hedorah, a monster that feeds on pollution in order the get stronger, the film is presented in a very surreal way. Some infamous moments from the film include an acid trip of a dance scene, random sequences of animations, and the infamous scene of Godzilla flying with the use of his atomic breathe. Cinemassacre’s James Rolfe once described the film as akin to a “children’s variety show” and yeah that is a fair comparison. Though one must wonder why this sudden change to be seen in the series.

First off one must look at what the Japanese film industry looked like at the time. See during the 1970s Japanese film studios were struggling to bring audiences to watch theatrically released films thanks to the explosion in the popularity of television. This was very evident in Kaiju and Tokusatsu films which had decreasing returns as television series such as Tsuburaya’s Ultraman franchise capturing audiences’ attention, especially children.

As such Toho came up with a new plan for Godzilla with the start of the Toho Champion Festival. Essential the Toho Champion Festival was a summer-long annual marketing campaign to rerelease classic Godzilla films and premier new entries along with other Tokusatsu properties. These Festivals were heavily marketed towards children and became a huge hit for Toho and as such the franchise would progressively be aimed towards a young audience.

Thematically this also fits with Banno’s vision towards the film as Godzilla vs. Hedorah was what many could argue as Godzilla’s first true heroic role as beforehand he was more or less an anti-hero after his turn in 1964’s Ghidorah, The Three-Headed Monster. As the years progressed since his debut in 1954’s Gojira, the nuclear allegory of Godzilla was slowly put in the background due to his growing popularity amongst audiences and different concerns around the world.

By the time Godzilla would face Hedorah, the biggest concern Japan had to face was the ecological disaster faced from the industrial boom of the 1960s. Not to mention Japan had built its first nuclear power plant in 1968 with the Tōkai Nuclear Power Plant. Essential the biggest fears for Japan’s people at the time would be shifted from nuclear power to pollution. So Godzilla’s role as the destroyer was replaced by Hedorah and now having Godzilla as the hero is fitting as now Japan had harness nuclear energy into a safe energy source (relatively speaking that is).

This doesn’t explain the film’s style as while many other Kaiju and Tokusatsu movies and shows have their fair share of bizarreness, Godzilla vs. Hedorah was weird even amongst its peers. Well, this all stems back to Yoshimitsu Banno.

Banno had always been a bit of an eccentric and has a vision that is truly his. He was hands-on during the entire production of Godzilla vs. Hedorah from the script, to the monster designs (including infamously designing Hedorah’s eyes to be based on female genitalia) to filming both the human and kaiju scenes.

As such Godzilla vs. Hedorah is one of the most director-driven Godzilla films since Ishiro Honda on Gojira. With Tomoyuki Tanaka sick and not having any say on the creative process, Godzilla vs. Hedorah is a Yoshimitsu Banno first and foremost. He was able to experiment with the film’s style to give it that pop-art style akin to a comic book and say the themes he wanted to address without any compromise.

After 50 years Godzilla vs. Hedorah remains one of the genre’s most unique films. Hedorah would become a staple in Godzilla’s rogues’ gallery and would frequently appear in many tie-in media such as video games, toys, and comics. Hedorah would even be referenced in other pop culture media such as Powerpuff Girls, Captain Planet, and on the album covers of Frank Zappa’s Sleep Dirt and Dinosaur Jr’s Sweep It Into Space.

Banno himself knew his film resonated with people as he would spend the rest of his career trying to make a direct sequel to Godzilla vs. Hedroah. One of his efforts, a potential IMAX 3D film called Godzilla 3D To The Max, would catch Legendary Picture’s attention, and soon it would help be the start of the Monsterverse with the production of Godzilla (2014). Banno would sadly pass away on May 7th, 2017, and the third entry of the Monsterverse Godzilla: King of the Monsters (2019) would be dedicated to him.

Despite his passing, fans of his film would celebrate his legacy and even though some are still turned off by the film’s eccentricity, in the end, one has to admire how much love and artistic vision went towards Godzilla vs. Hedorah. And with climate change still being relevant, Godzilla’s own battle with pollution might still be relevant half a century later.