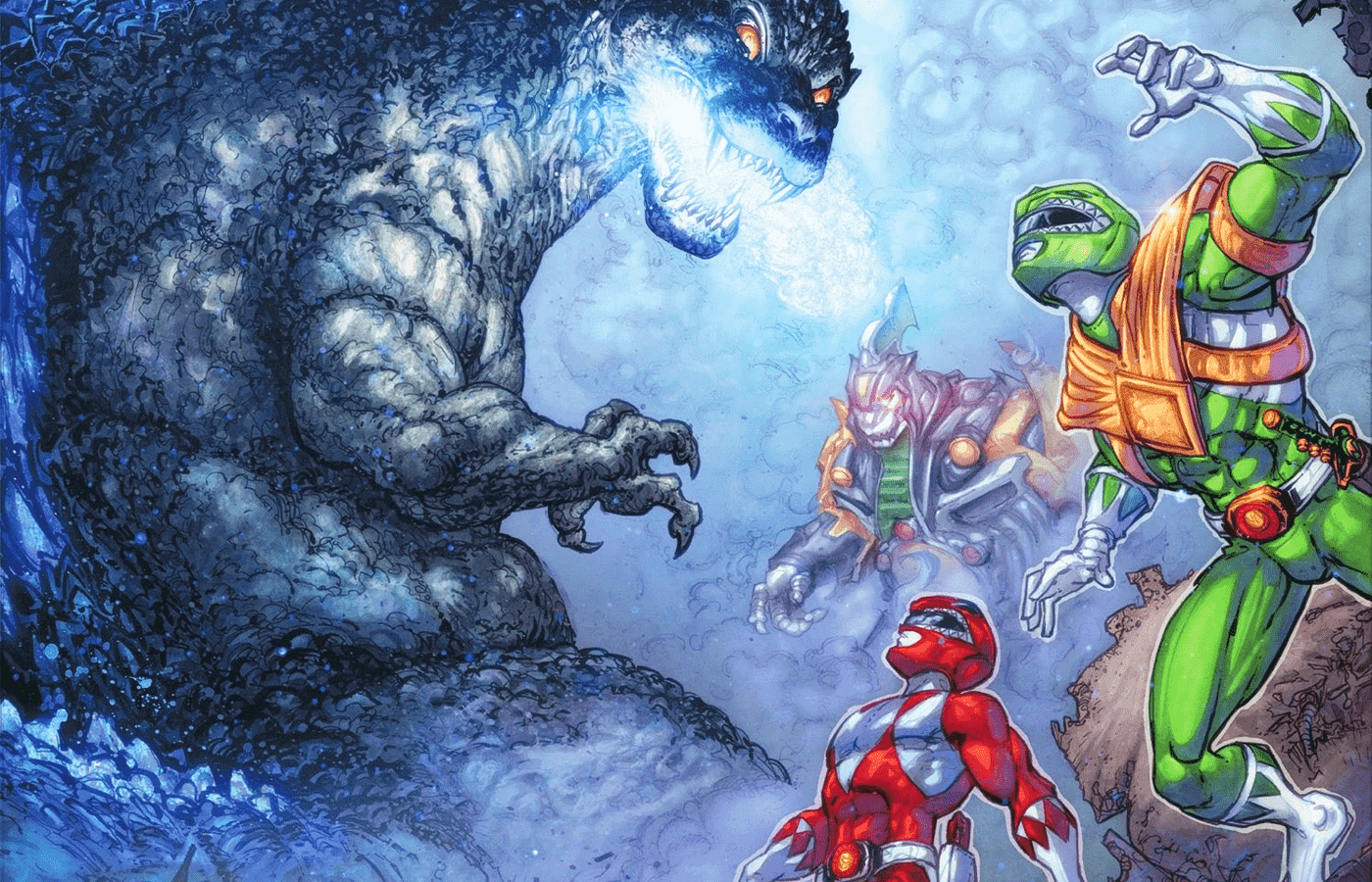 When it was announced that IDW Publishing and Boom! Studios would collaborate with their licensed comics to give the world an official crossover comic miniseries between Godzilla and Power Rangers, fans of kaiju and tokusatsu (Japanese special effects media) exploded with joy as this was something long dreamt up by fans of both franchises.

Now that the first issue has arrived on comic store shelves, did Godzilla vs. Mighty Morphin’ Power Rangers Issue 1 leave a good first impression on this giant-sized crossover? The short answer: hell yes! The long answer: let’s dive right in it!

RELATED: 10 Things We Want To See In The Godzilla vs. Kong Sequel

Clash of the Toku Titans

The villains are then intercepted by the Green Ranger Tommy Oliver just as Rita uses the artifact to travel to another universe, taking Tommy for the ride. They soon land in what seems to be the ruins of the Power Rangers’ hometown of Angel Grove and soon realize what caused the damage: Godzilla battling the insectoid kaiju Megalon.

Rita soon spots an alien spacecraft and boards it, fighting off the inhabitants who turn out to be classic Godzilla series aliens, The Xiliens. After fighting them into submission, the Xiliens strike an alliance with Rita. They have been sending their own monsters to take over the earth, only for Godzilla to thwart them time and time again.

Unfazed, Rita tries to control Godzilla with her magic but finds out it only enrages the King of the Monsters. Soon The Green Ranger awakens and faces off against the Big G via his Dragonzord as he assumed Godzilla was another creation of Rita’s. While Tommy valiantly fights off the radioactive kaiju at first, the Dragonzord proves to be unmatched by Godzilla and is defeated. Just as all hope is lost, the rest of the Power Rangers come to Tommy’s aid (as they were sent by their mentor Zordon after Tommy’s communicator went silent). The issue ends with the Rangers ready to summon their Zords to fight against Godzilla.

The 90s Rises From The Depths

If there is one thing that can describe Godzilla vs. Mighty Morphin’ Power Ranger Issue 1, it’s that this is a book that is perpetually in the 90s. And that is meant as an honest compliment. The 90s was the heyday of crossover comics such as Aliens vs. Predator or RoboCop vs. The Terminator, with most of those books looked upon with fond memories for how cheesy they are. As such, it’s clear that is the energy and tone this miniseries is going for from what we see from this first issue.

This miniseries already has a great start from the get-go as the creative team is near perfect for this project. The writer for Godzilla vs. Mighty Morphin Power Rangers Issue 1 is prolific comic genre writer Cullen Bunn. Bunn has a history with kaiju as he wrote one of the better IDW Godzilla mini-series Godzilla: Cataclysm along with writing 90s era comic book characters such as Deadpool and Carnage for Marvel. As such, Bunn is taking full advantage of the Godzilla side of things as already in this first issue we have classic Godzilla deep cuts such as Megalon and The Xiliens (who first appeared in Invasion of Astro-Monster).

Bunn also captures the 1990s cheesy goodness that is a staple of the Power Rangers, especially the classic Mighty Morphin’ incarnations. The Rangers are the straightforward serious yet bantering heroes while Rita and her minions are very much over-the-top Saturday morning villainy. If anything, this comic feels akin to the classic Marvel Power Rangers comics and both Dark Horse’s interpretation of Godzilla and Trendmasters Toys’ version as well.

Another incredible aspect of Godzilla vs. Mighty Morphin’ Power Rangers Issue 1 is the art. Penciler artist Freddie E. Williams II and colorist Andrew Dalhouse’s artwork is a feast for the eyes with the colorful Power Rangers and the almost apocalyptic take on Godzilla, especially Dalhouse’s use of blues and reds. Freddie E. Williams II already has a history of crossover comics as he has provided pencils for Batman/Teenage Mutant Ninja Turtles and He-Man/Thundercats so it’s clearly one of his main talents is keeping both sides of the crossover mesh well yet remaining true to their different sources.

Yet despite the creative team clearly channeling 1990s energy, Godzilla vs. Mighty Morphin’ Power Rangers Issue 1 isn’t a self-parody or farce of those 1990s crossover comics. It almost feels like this comic was lost to time and was recently unearthed with only some modern comic sensibilities. This feels like the story a kid growing up watching Power Rangers on TV along with their collection of Godzilla VHS tapes would come up with.

For a first issue, Godzilla vs. Mighty Morphin’ Power Rangers Issue 1 kicks the door down and embraces the ridiculous yet that both franchises bring to the table. We get classic kaiju action with Godzilla and the tokusatsu cheese of the Power Rangers. If you are a fan of either or (most likely) both franchises, this first issue is a must-read!

What Did You Think Of Godzilla vs. Mighty Morphin’ Power Rangers Issue 1?

Did you enjoy seeing Godzilla and the Rangers clash in Godzilla vs. Mighty Morphin’ Power Rangers Issue 1? What do you hope to see come out of this crossover? Let us know on social media today!