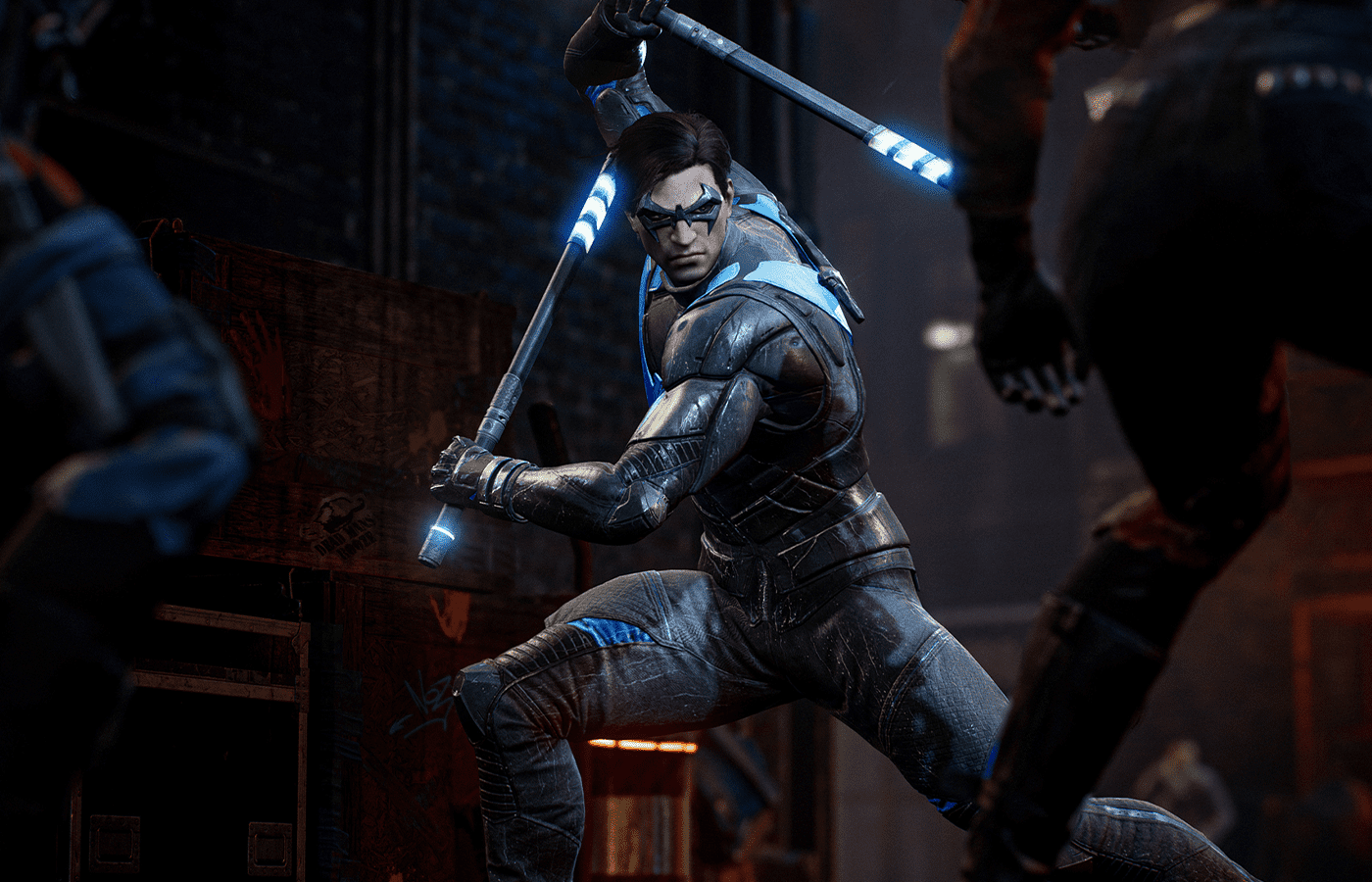 On Tuesday, May 10th Warner Bros. Games released a gameplay demo trailer for their upcoming title Gotham Knights. In the world of Gotham Knights, Batman is dead. A new criminal underworld has arisen and it’s up to the remaining Bat-Family; Batgirl, Nightwing, Red Hood, and Robin; to protect Gotham, bring hope to its citizens, discipline to its cops, and fear to its criminals. Gotham Knights is an open-world, action RPG set in the most dynamic and interactive Gotham City yet. In either solo-play or with one other hero, patrol Gotham’s five distinct boroughs and drop in on criminal activity wherever you find it.

In this brand new thirteen-minute gameplay demo, we get a better look at the combat system, fast travel, AR abilities (detective vision), and skins offered throughout. Game director, Geoff Elenor kicks off the walkthrough by showing players what they can expect from Nightwing and Red Hood in the upcoming title. We’re first introduced to the map of Gotham Knights, which features a sprawling and dark Gotham City. Large neon-lit buildings are masked with fog and rain. We get a brief look at Wayne Tech tower, the Gotham City Police Department, and some peculiar graffiti.

The graffiti appears to be of a clown, Scarecrow, and a tag that reads “Dr. Zero”. The name Dr. Zero could be an allusion to Mr. Zero which was the original name of Mr. Freeze all the way back in Batman #121 (1959). This doesn’t seem too unlikely of a connection since Mr. Freeze was a prominent focal point in the first few trailers of Gotham Knights. One of the other interesting aspects of the Gotham City map is the inclusion of street civilians that aren’t enemies. People will say hello and congratulate you on stopping crimes as you pass them by. This is a change of pace from past Batman-inspired video games.

Your main home base throughout Gotham Knights will be in the Belfry. A shared HQ by all the Bat-family members. There you can access the Bat-computer to choose challenges and continue the main story. You can also access the workbench in the Belfry to upgrade equipment as you play. You’ll have options to upgrade your suit, melee attacks, and ranged abilities. You’ll find blueprints and crafting materials as you take on more missions to assemble additional gear. Each blueprint offers different stats so players can choose how they want to play.

As you play, other members of the Bat-family will give you support and tips. Like past Batman games, you’ll want to rely on stealth as you traverse new areas. Sneak up on enemies and silently take them out one by one, or barge right in and take the fight to them. Every hero has unique takedowns and finishing moves. Ambush strikes are faster than silent takedowns but will obviously make more noise.

Dick Grayson is a natural leader, an optimist, and the most charismatic of the Batman Family. He grew up in an unorthodox but loving circus family, so he values close personal bonds. Dick believes that, for the fight to be worth it, there must be something real to fight for; and that something has always been other people. He was Batman’s first protégé before becoming a hero in his own right.

We’re first introduced to Nightwing about mid-way through the game as he perches above Gotham. Nightwing leaps off a building and summons his glider which seems to be his main way of travel across the map. Players will also have the option of fast travel later on with a larger glider known as the Fast-Bat. Nightwing flies overhead to stop one of the common enemies in Gotham Knights known as the Regulator Gang. Each fight acts as its own mini-game with separate rules and optional objectives.

Nightwing plays very much like an acrobat, with swift and timed combat that moves effortlessly. Nightwing’s escrima sticks allow you to fight enemies quickly while offering a variety of attacks. Though you can play solo, Gotham Knights offer the ability to play co-op with a friend in the role of another Bat-family member. Timing proper attacks and building combos creates a large momentum bar, this allows players to storm through enemies. Once the bar is full, it’ll unlock powerful abilities for your respective vigilante. One option for fighting is to hit your enemies with a cryo-freeze attack, which will take them out of the fight temporarily.

Jason Todd is an intense and volatile anti-hero. It all stems from dying a violent death and then being forcibly resurrected by one of Batman’s most dangerous foes. He has trouble keeping his temper in check, but he will not hesitate to step into the line of fire when a friend is threatened. Red Hood wants crime to pay because Gotham City is built on a foundation of corruption, and he’s been on the receiving end of it far too often.

In the trailer specifically, we’re introduced to Red Hood as they display the full capabilities of co-op mode. Red Hood can jump through the air with Mystical Leap, which acts as a double jump of sorts. Director Elenor explains that Jason Todd obtained some magical abilities after being resurrected by a cult of assassins. As Jason, you can also utilize a grappling hook to zip onto buildings. One of the other methods of traversal throughout the game is with the Bat-cycle. This mode of transportation is available to all characters. When you pre-order the game you’ll get access to the 233 Custom Bat-cycle skin.

Red Hood utilizes non-lethal rounds to fire at enemies and with his barrage ability he can interrupt armored attacks. It’s also worth noting that while in co-op you can tag-team enemies, especially with specialized finishers. Red Hood’s fighting style is that of a brawler, a little slower but with a bigger punch. As Red Hood, you can also attach bombs to enemies to send out a shock wave affecting other opponents nearby.

What Consoles Will Gotham Knights Be On?

Gotham Knights will be made available on PS5, XBOX Series XS, and PC for digital download.

When Does Gotham Knights Come Out?

Are You Excited for Gotham Knights?

What Bat-Family member are you most looking forward to playing as? What villain do you hope will appear in the game? Let us know on social media today!