I Took Cutie For A Ride In My Death Cab 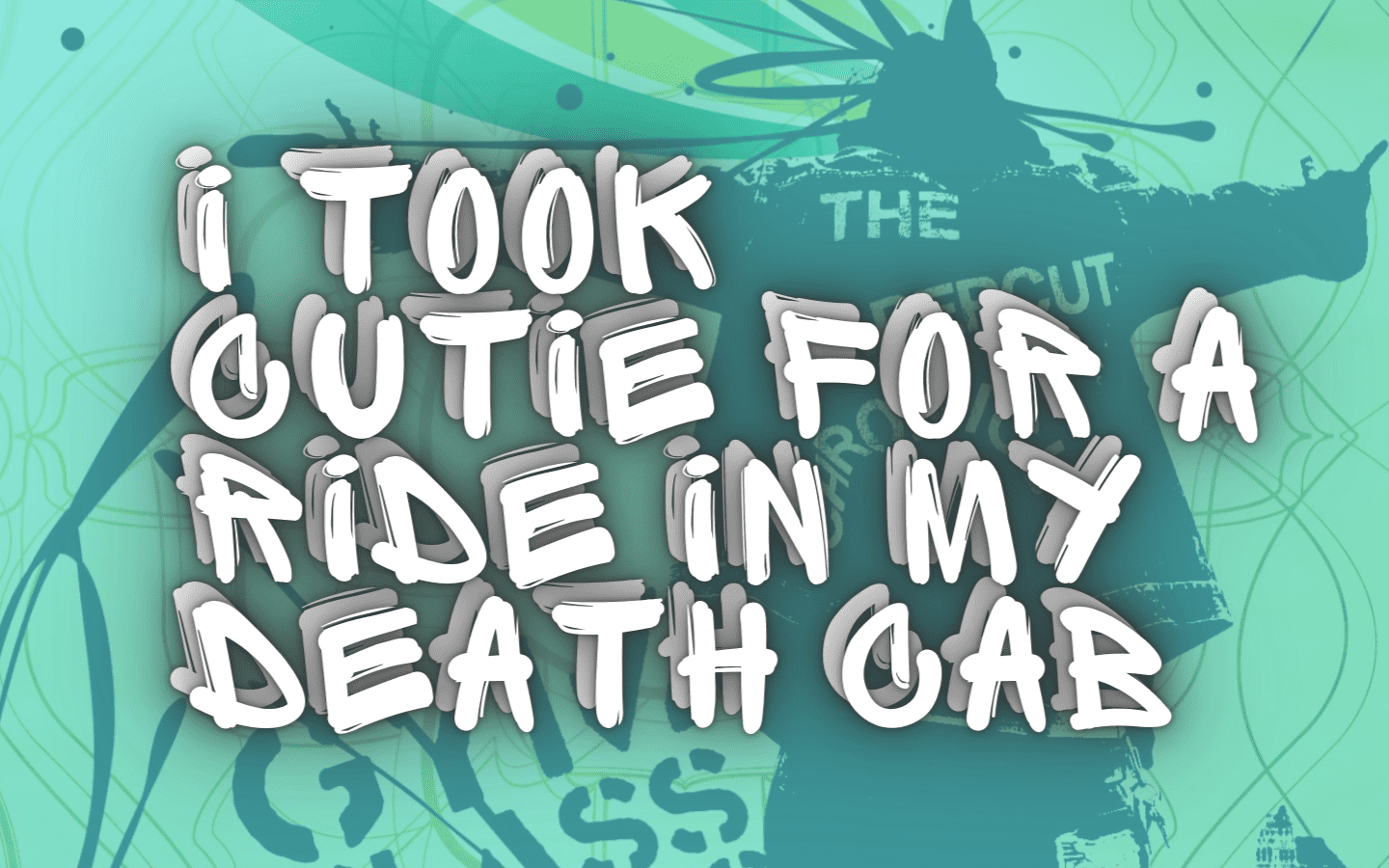 ‘Taxi Driver’ is track five on Gym Class Heroes’ 2005 album ‘The Papercut Chronicles’. The track tells the story of a taxi driver, and the customers they interact with throughout their day. What makes this song special is that the lyrics are comprised of many emo, punk, pop-punk, and post-hardcore bands that were popular and influential in punk rock culture.

Today we are going to take a look at every band referenced in Gym Class Heroes’ ‘Taxi Driver’. If you are an old emo kid, this will be a fun nostalgia trip. If you are just getting into these genres, the bands listed in ‘Taxi Driver’ will give you a well-rounded view of this facet of punk rock. Enjoy!

I Took Cutie For A Ride In My Death Cab

Death Cab For Cutie is a band from Bellingham, Washington. They formed in 1997, originally as a solo project from frontman Ben Gibbard. The band’s first album, ‘Something About Airplanes’, was released in 1998.

Before She Left, She Made A Dashboard Confessional

Dashboard Confessional is an emo/indie rock band from Boca Raton, Florida. The band is led by singer and songwriter Chris Carrabba. The band’s first album, ‘The Swiss Army Romance’, was released in the year 2000.

Then Spilled Her Guts In Cursive

Cursive is an emo/post-hardcore band from Omaha, Nebraska. Their first album, ‘Such Blinding Stars For Starving Eyes’, was released in 1997. However, the band did not find widespread success until their 2000 album ‘Domestica’. Cursive is a very influential band in modern emo and punk rock.

I Could Still See Her Bright Eyes

Bright Eyes is an indie-folk/emo band from Omaha, Nebraska. The group is led by singer-songwriter Conor Oberst. Bright Eyes is known for collaborating with many other musicians, and Conor’s songwriting is widely renowned.

I had the pleasure of seeing Bright Eyes a few years ago, after the release of their 2007 album ‘Cassadaga’. While I didn’t know a lot of Bright Eyes songs at the time, it was one of the best concerts I have ever attended.

Sunny Day Real Estate is an emo band from Seattle, Washington. Their first album, 1994’s ‘Diary’, is an integral work in the development and evolution of emo as a genre. To this day, ‘Diary’ is one of my all-time favorite albums.

My Little Chemical Romance Left A Bad Taste In My Mouth

My Chemical Romance is a band that needs no introduction. They are one of the most popular bands in pop-punk and emo. They did an excellent job of mixing pop-punk with horror and goth influences. I think of My Chemical Romance as the natural progression of this style, set by predecessors such as The Misfits, Alkaline Trio, and AFI.

Hey Mercedes, Why The Long Face?

Hey Mercedes was an emo/pop-punk band from Milwaukee, Wisconsin. During their time together, they released two full-length albums and four EPs.

Just Put On This Coheed

Coheed And Cambria is a post-hardcore/progressive rock band from Nyack, New York. They are one of the most successful bands to come out of the early 2000s emo scene. While many of their songs sound like emo songs on the surface, listening to their albums in order will tell you an epic and sprawling science-fiction story. Most of their albums also have comic books that align with the stories in the songs.

Fall Out Boy is a pop-punk/emo band from Wilmette, Illinois. While Fall Out Boy is seen as a mostly-pop band in the modern age, their contributions to punk and emo cannot be overstated. Their first EP, 2002’s ‘Fall Out Boy’s Evening Out With Your Girlfriend’, is a perfect pop-punk album.

I was lucky to see Fall Out Boy live right after the release of their first full-length album ‘Take This To Your Grave’. I got to see them play a bunch of songs from Evening Out With Your Girlfriend that they do not often play live anymore.

Boy Meets Girl is a pop duo that was popular in the 1980s. Their biggest song was ‘Waiting For A Star To Fall’.

Jimmy Eat World is a band I don’t often see discussed when it comes to pop-punk and emo. They always seem to be brought up with alternative rock bands. However, they will always be an influential emo band in my heart. Jimmy Eat World is from Mesa, Arizona, and began making music in 1993. They currently have ten full-length albums under their belt.

Not Once, Not Twice, She Was Thrice Times A Lady

Thrice is a post-hardcore band from Irvine, California. They formed in 1998 and have had a long career spanning over ten full-length albums. Most fans will remember their third album, ‘The Artist In The Ambulance’.

Actin All Brand New But I Had To

Brand New was a pop-punk/emo band from Long Island, New York. Like many other early 2000s emo bands (like Taking Back Sunday and Fall Out Boy), Brand New is known for its blunt, tongue-and-cheek lyrics. Their first two albums, ‘Your Favorite Weapon’ and ‘Deja Entendu’, are some of the most influential emo albums of all time.

Bounce To The Postal Services

The Postal Service is an indie-pop/electronic group from Seattle, Washington. The group is fronted by Ben Gibbard of Death Cab For Cutie. To this day, the group has released nine full-length albums.

I Saw Planes And Mistook Them For Stars

Planes Mistaken For Stars is a post-hardcore/emo band from Peoria, Illinois. While the band was influential in the post-hardcore and emo scenes, they had their own unique sound that blended elements of metal in their songs.

At The Drive-In is one of my all-time favorite post-hardcore bands. In my opinion, their second album ‘In/Casino/Out’ is a perfect punk/post-hardcore album.

You Could Tell By The Trail Of The Dead

…And You Will Know Us By The Trail Of Dead (usually referred to as Trail Of Dead) is a post-hardcore band from Austin, Texas. The band has released eleven full-length albums, with their newest album coming out in 2022.

I began listening to Trail Of Dead in 2002 after the release of their third album ‘Source Tags & Codes’. While this was my introduction to the band, my favorite album has always been their second release, ‘Madonna’.

Hop In My Cab, Destination Midtown

Midtown is a pop punk band from New Brunswick, New Jersey. They had three full-length albums before breaking up in 2005. That said, the group has reunited a few times over the years for concerts and appearances. Many emo fans will recognize frontman Gabe Saporta from the early 2000s pop group Cobra Starship.

The Get Up Kids is a pop punk/emo band from Kansas City, Missouri. They are one of the most influential bands in modern punk and pop punk culture. They have been cited as an influence by many bands, including Fall Out Boy and Taking Back Sunday.

In Between The Frowns And Scraps And Heart Attacks

Scraps and Heart Attacks was a hardcore punk band from Long Island, New York. While they did not release much music during their time together, they were an influential band for many post-hardcore artists.

I Seen Her Ass Early November

The Early November was an emo/post-hardcore band from Hammonton, New Jersey. They have released three EPs and five full-length albums.

Thursday is a post-hardcore band from New Brunswick, New Jersey. They have released six full-length albums since their formation in 1997. Their second album, ‘Full Collapse’, is known as a staple work in emo and post-hardcore culture.

Taking Back Sunday For a Refund

Taking Back Sunday is a band from Long Island, New York. They play a blend of pop punk, emo, and post-hardcore. Their first two albums, ‘Tell All Your Friends’ and ‘Where You Want To Be’, were very influential in early-2000s emo. Taking Back Sunday is known for their unique song compositions and layered vocals.

Then She Jetted To Brazil, Man

Jets To Brazil was an indie/emo band from Brooklyn, New York. The band was created by Blake Schwarzenbach who is known for being the frontman of the influential punk band Jawbreaker. The band put out three albums before going silent in 2003.

This The Story Of The Year Right Here

Story Of The Year is a pop punk/emo band from St. Louis Missouri. They made it big with their 2003 album ‘Page Avenue’, and have gone to put out four more full-length albums since.

This Is Hot Water Music

Hot Water Music is a punk rock band from Gainesville, Florida. They started in 1993, and have released nine full-length albums and a variety of splits and EPs.

What Is Your Favorite Band Referenced In Taxi Driver?

We hope you enjoyed the list of every band referenced in Gym Class Heroes’ Taxi Driver. What was your favorite band that was mentioned? Let us know on social media!