When it comes to Halloween - Michael Myers is just a man, not evil incarnate. This is Laurie Strode's life, not just fodder for a true-crime podcast. 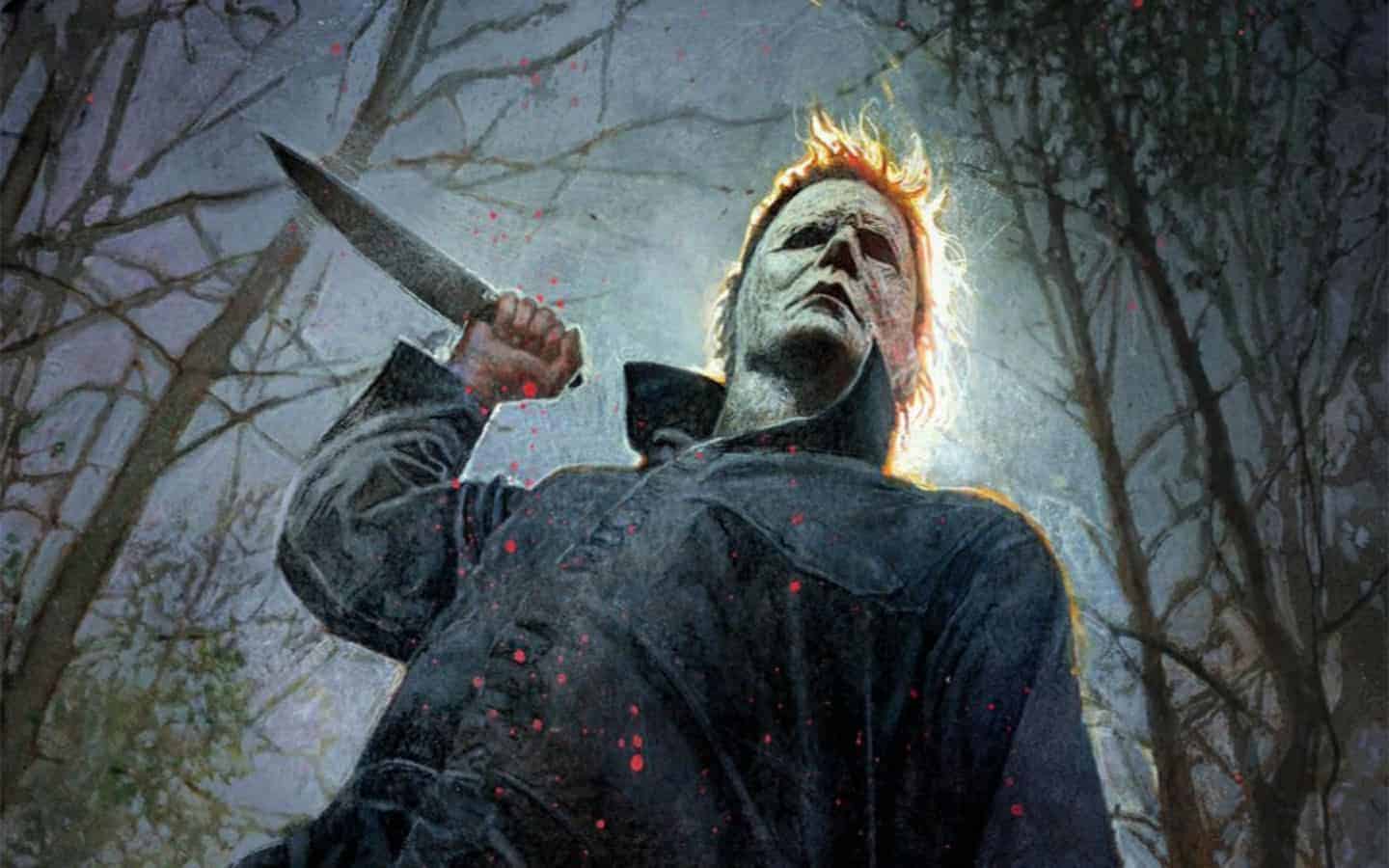 On October 19th , 2018 fans of the Halloween franchise got something we never would have expected, a sequel that put a mature woman in charge and showed us life through her eyes. Laurie Strode had grown up and so had the film she was featured in. As we prepare for two more films in this re-boot trilogy, let’s take a look back to why 2018 was such an important film for Laurie Strode, women in horror and also see if there is proof that there is a trend emerging for the future of Hollywood genre fare. Laurie returning for a sequel to the original film was nothing new. Jamie Lee Curtis has been back before.

First in Halloween II, which continues the story of the 1978 classic minutes after the credits rolled and then again in Halloween: H20 as a survivor twenty years after the events of the first film living under an assumed name and using alcohol to cope with her past (as well as its sequel Halloween: Resurrection). Fans will debate endlessly about the validity of these installments in the series, but in the end, none of these films address the world of Halloween the way director David Gordon Green and his collaborator Danny McBride did for this film.

They were able to take a cold, hard look at how a grown woman deals with trauma, how it affects the rest of her life and how it will impact the generations of women in her family. 2018 marked the 40th anniversary of the original film. It would also put Laurie Strode in her late 50s; a senior citizen as it was. In the past Hollywood has traditionally aged actresses out of leading roles when they reach their 40s. After that women are banished to the realm of grandparent characters, leaving leading lady roles far behind them (even though men are able to continue being the love interest well into their senior years, sometimes decades older than their co-stars).

In the past few years, we have seen an active movement by both actresses and filmmakers to push back on this ageist and sexist mode of thinking. And, as always, genre films are excellent platforms for bucking the systems and traditions of mainstream cinema. When making the decision to make a film honoring the 40th anniversary of a franchise, there are a few elements that must be in place to reel in the fan base: it must take place in Haddonfield, it must take place on Halloween night, it must feature John Carpenter’s score, Michael Myers must be the killer and he needs a familiar adversary.

To make the most of the importance of 40 years later, only one person can fit the bill as Myers’ foe (especially since Donald Pleasance sadly passed away not long after filming part 6). Green brought Jamie Lee Curtis on board and made the conscious decision to wipe all of the previous sequels away in order to tell Laurie’s story, to focus just on seeing who she became.

This gave Curtis the amazing ability to flex her skills as an actress and put herself into the character that launched her career and try to truly imagine what her world would look like now; to try to understand how Laurie Strode would feel today. And that was a great risk to the actress and the filmmakers. They risked alienating fans and at the same time putting their trust in the story of a 57-year-old woman dealing with trauma. And the result was wonderful.

The realistic approach to the effects of traumatic events is one of the things that lured Curtis to the project and brought her back to the character again. Especially in this day and age where women are actively taking a stand and fighting back against sexual violence, confronting their assailants, and dealing with the trauma in their lives, Curtis wanted this movie to have something important to say. Women who have been assaulted or attacked deal with violence in their lives every day and it has a deep emotional impact on themselves and their loved ones.

Women aren’t just victims and survivors; they navigate through the complex aftermath of traumas that they have endured. Laurie Strode would have been haunted by what she experienced back in 1978 every day of her life and it would have affected the decisions she would make for the past 40 years. It would have had an influence on how she raised her own daughter and what her relationship with her granddaughter would have been like.

All of these things needed to be addressed. One of the most powerful moments in the film to me is when the documentary podcasters are sitting in Laurie’s living room interviewing her. Curtis’s body language is distinct. Her arms folded over her chest serve as a barrier to her emotions. She is immediately closed off to them. She is not a victim and will not be portrayed as one. Michael is just a man, not evil incarnate. This is her life, not just fodder for a true-crime podcast.

She is in charge and they will not take any power away from her by painting her as some wacko hermit living in the past. Michael Myers’s actions then still impact her present day. She will not have anything to do with their sensationalistic approach to the anniversary of the Haddonfield killing spree. Throughout the movie, we are given clues to what has happened in the last 40 years of Laurie Strode’s life.

We discover that she has been divorced twice, her daughter was taken away from her and she lives alone continually preparing for the eventual return of Michael Myers. She has become a survivalist and created her entire property as a massive booby trap to keep her and her loved ones safe. Her entire life is the result of PTSD and her determination to never be victimized again. Laurie is paranoid, has had troubles with alcohol, and sees herself as the protector of her family.

She is also the watchdog of Myers’s case, keeping track of his court dates and stay at the sanitarium (to the point that she never leaves the Haddonfield area to be closer to him). When her daughter, Karen, was younger Laurie had been training her in surveillance and weapons so she would be able to defend herself in any situation. Today that relationship is strained as Karen is dealing with her own feelings of trauma from the way her mother raised her. She has inherited her mother’s paranoia and psychosis. Laurie sees a sense of hope, though, in her granddaughter Allyson who seems to be establishing her own relationship with her grandmother by going behind her mother’s back.

All three generations of Strode women are dealing in their own ways with the aftermath of Laurie’s traumatic history. In some ways, Laurie’s life has stayed the same since that fateful Halloween night in 1978. Much like how she was the protector of the children she was babysitting that night, she is now the protector of the women in her family.

When Laurie was 17 she was the only one of her friends that knew something was wrong in their town. She was highly aware of things happening around her and had a heightened sense of watchfulness even though the other girls told her not to worry. Today Laurie is keeping constant vigil, being the watchful guardian knowing that one day Michael would return, while others tell her to calm down. Both in 1978 and in 2018 Laurie turned out to be right.

Another very telling moment in the film is the early morning when Myers is being transported from Smith’s Grove Sanitarium to a new facility. Laurie is parked across the street waiting to watch the bus leave with Myers. She has been drinking and has a gun at the ready. She contemplates just killing him now, but seeing Michael get walked out to the bus and board with the other inmates is enough to dredge up all of those old feelings and she is overtaken with emotion. Laurie breaks down crying alone in her car. As strong as Laurie may be today, with all the years of weapons and survival training, once she sees her one time assailant Laurie is instantly brought back to that Halloween night so long ago.

She is not a superwoman, but just a regular woman that is human after all. And this moment is too much for her to take. In the end, Laurie and her daughter and granddaughter are forced to come together and work together in their time of need to take on the perpetrator of their family’s suffering. They use their strength together and claim their freedom from the man who has removed the sense of safety from all of their lives. Even if Karen resents how her mother used their time together when she was a child, now that training turns to instinct. She is an excellent shot. And Karen’s daughter Allyson is a lot like her grandmother. Even when life goes sideways, she doesn’t back down, instead, she fights back and stays tough. Just like Laurie at 17, Allyson doesn’t give up.

All three generations of Strode women stand strong and work together towards a triumphant ending. Last year there was another franchise reboot that took a page from Halloween 2018’s book. The weight of Terminator: Dark Fate’s success was placed squarely on the back of another mature female icon, Sarah Connor. Linda Hamilton, much like Jamie Lee Curtis, returned to the role that kick-started her career in order to bring the story full circle. Both Laurie Strode and Sarah Connor started out as normal young women, but both survived a traumatic event in their past that shaped the strong women they became.

They learned how to not only defend themselves but went on to train their children and teach them to be prepared for impending danger. Both became vigilantes, waiting for the moment to stand tall against their assailants again, even if it took 35-40 years for that time to come. As a woman in her 40s that grew up watching these women (both their characters and the actresses), I was excited and proud to see their triumphant returns as they kicked ass for women everywhere.

It gives me hope that women will be given the opportunity to reclaim their voice and importance as survivors not just victims, but also in a future for genre film (horror, sci-fi, action, etc.) that will no longer be afraid to put mature women at the helm.