Hatching (2022) Review: The Grotesque Beast Lurking Under the Peaceful Surface 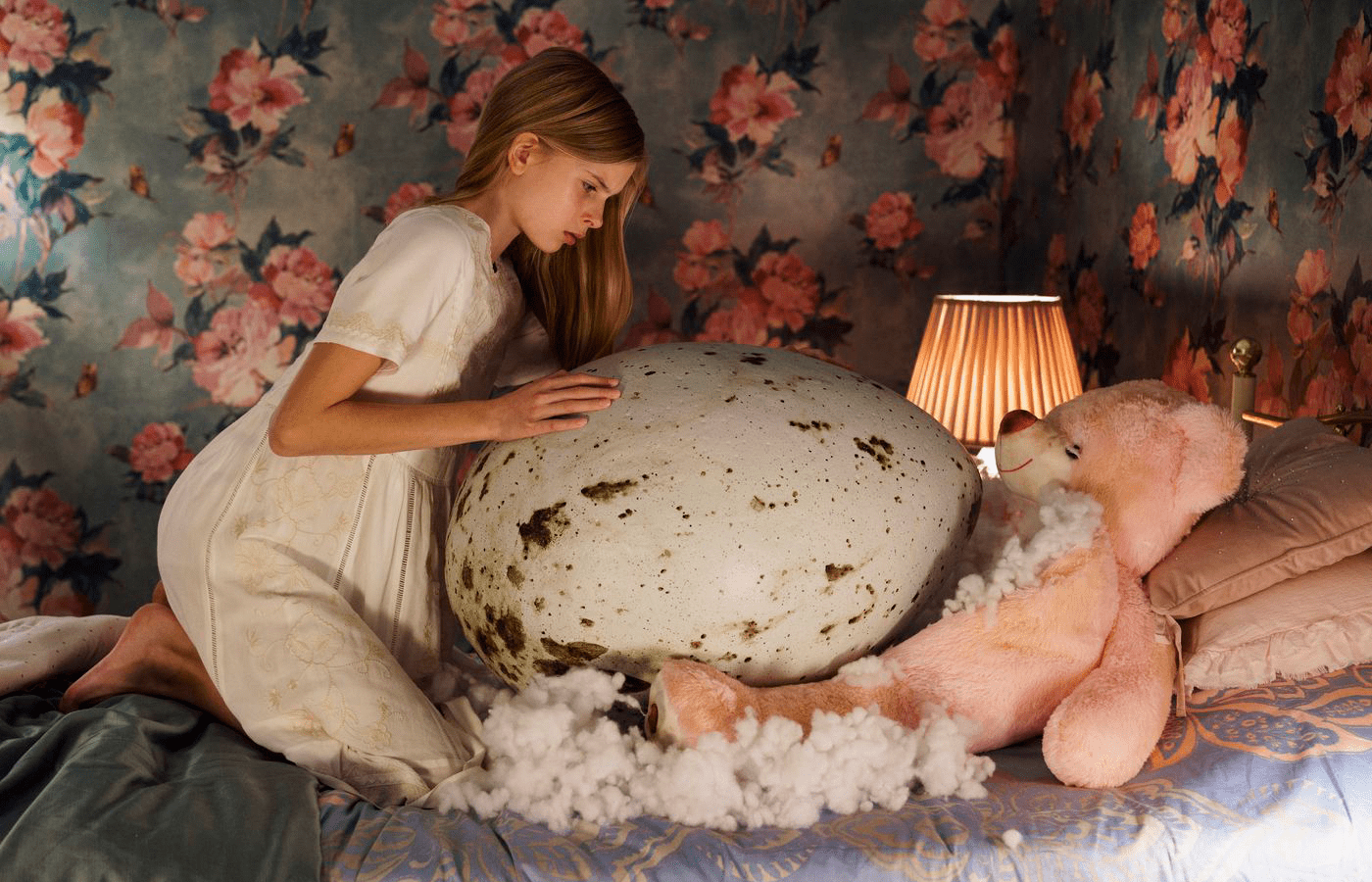 One popular subgenre of horror for well over half a century has been the tale of monstrous children. Whether they appear in the form of human children with a hidden terror beneath the surface or as beasts that take external shape, these stories have a lasting impact due to their timely perspectives on contemporary issues of nature vs nurture and autonomy.

Hatching (2022) is a film that was under the radar of most filmgoers. While large-budget Hollywood productions filled the screens, this little film, despite its limited presence, was able to stand out with its thematic depth and impressive use of practical effects.

RELATED: Here’s Every Title Coming To Streaming In June 2022

This is a unique film within the “evil children” sub-genre. While the films within this genre can be a mix between exploitative schlock and meaningful studies, they fascinate in the way that they portray children as losing their innocence and becoming monsters. This film changed directions by focusing primarily on the psychological aspect rather than mere physical brutality, though it does have its share of body horror that fits with the overall tone.

Hatching begins simply enough: An upper-middle-class family, living in a clean, bright suburban neighborhood, is shown to be happy and close-knit. The mother, proud of this structure and lifestyle, vlogs the family’s experiences to give the outward appearance of perfection. No blemish or rot can be found within the tranquil walls. The household is filled with smiles and the appearance of healthy connections.

During one of the vlogging sessions, a raven flies into the home and breaks numerous decorations. With the floor covered in shattered pieces, panic ensues. This tranquil paradise is broken up by a terror from the deepest parts of the dark woods beyond. The family attempts to catch the bird, but it only causes more damage. It isn’t until the daughter, Tinja, throws a blanket over it that the chaos ends.

In the aftermath, Tinja cradles the captured bird. Despite the damage caused, she shows kindness to the panicked animal. In a seemingly gentle gesture, the mother asks to hold the bird. All is calm until, suddenly, the mother snaps the bird’s neck and orders for the corpse to be thrown into the vile trash. This violent action, being a sharp contrast to the previous blissful scene, is the catalyst of the horrors to come.

The narrative unfolds into a creature feature with a wit as sharp as its bite. Tinja, seeing the raven still moving, takes the bird to the woods. When she comes to the realization that there is nothing more she can do, she kills the animal with a rock, putting it out of its misery. Through mysterious means, the dead raven miraculously has an egg. Tinja, feeling a new sense of responsibility and genuine guilt for the outcome of the raven, takes the egg home to care for it. All seems to be going smoothly until the egg grows to be as large as her. Despite this, she is not alarmed. This is the beginning of a new stage of her life that will allow her to be more expressive and not restricted by her mother’s demanding nature.

As expected, the large egg hatches. The creature that eventually emerges from the shell is a large bird with slight human features to it. Tinja begins to raise the bizarre beast as her own child. With its mix of animal and human qualities, the creature is cared for in numerous ways, from eating chewed-up birdseed to being bathed by Tinja. It even gets to the point when Tinja gives the creature the name Alli. While grotesque in appearance, Alli is shown to look up to Tinja as a mother and does her best to behave and please Tinja. Things begin to turn dark as Alli slowly reveals a new personality. Since Alli has supernatural characteristics, she is able to have a sixth sense that connects to Tinja’s repressed rage.

While Tinja outwardly presents herself as a girl who is well behaved, Alli represents her darkest feelings. Alli, on Tinja’s behalf, will injure or even kill anyone or anything that disturbs Tinja’s tranquility. Unease settles in when Alli is on the prowl. It’s disturbing that Alli mainly targets pets and children because of Tinja’s jealousy of them. These smaller targets make sense as they are the ones that Tinja shows annoyance towards. The source of Tinja’s true frustration, her mother, is able to be unscathed throughout the film due to Tinja’s continuous struggle to impress her.

Alli and Tinja’s mother represent two sides of a coin. Alli is genuine in her nature, as horrifying as it may be. Tinja’s mother, on the other hand, starts off presenting herself as the perfect housekeeper, only to reveal her true self when things begin falling apart. Whether it’s Tinja’s imperfect gymnastics performances or her unhealthy relationship with the man she’s having an affair with, she loses any form of empathy and physically lashes out.

RELATED: Titane Review: Beyond Expectations of Narrative and Identity

The narrative, with the introduction of Alli into Tinja’s life, begins to reveal the cracks in the facade that the mother outwardly expresses. The most passionate Tinja is throughout the narrative when she is beyond the grasp of her mother and the quiet suburbia she is trapped in. This comes in the form of not only Alli but surprisingly the man who Tinja’s mother is having an affair with. Living in a rundown house with his infant child, he shows nothing but kindness towards Tinja. This is a relationship that’s more healthy than the toxicity of her family life. It’s only until Alli’s intrusion that this connection is strained in a violent and haunting case of mistaken identity.

Hatching is a compelling work that, whether you like body horror or character studies, will tick many boxes for film buffs. With its rich cinematography and allegorical flow, the film draws the viewer in with its unique style. Clocking in at just under 90 minutes, it’s able to tell a classic tragedy that does not drag or lose focus. Instead, it allows the viewer to dwell on relevant themes of independence and external sincerity that are difficult to glance over.