David Weiner is the director, writer, and producer of the 2019 horror film documentary In Search of Darkness. He's back from the future with his sci-fi doc In Search of Tomorrow. 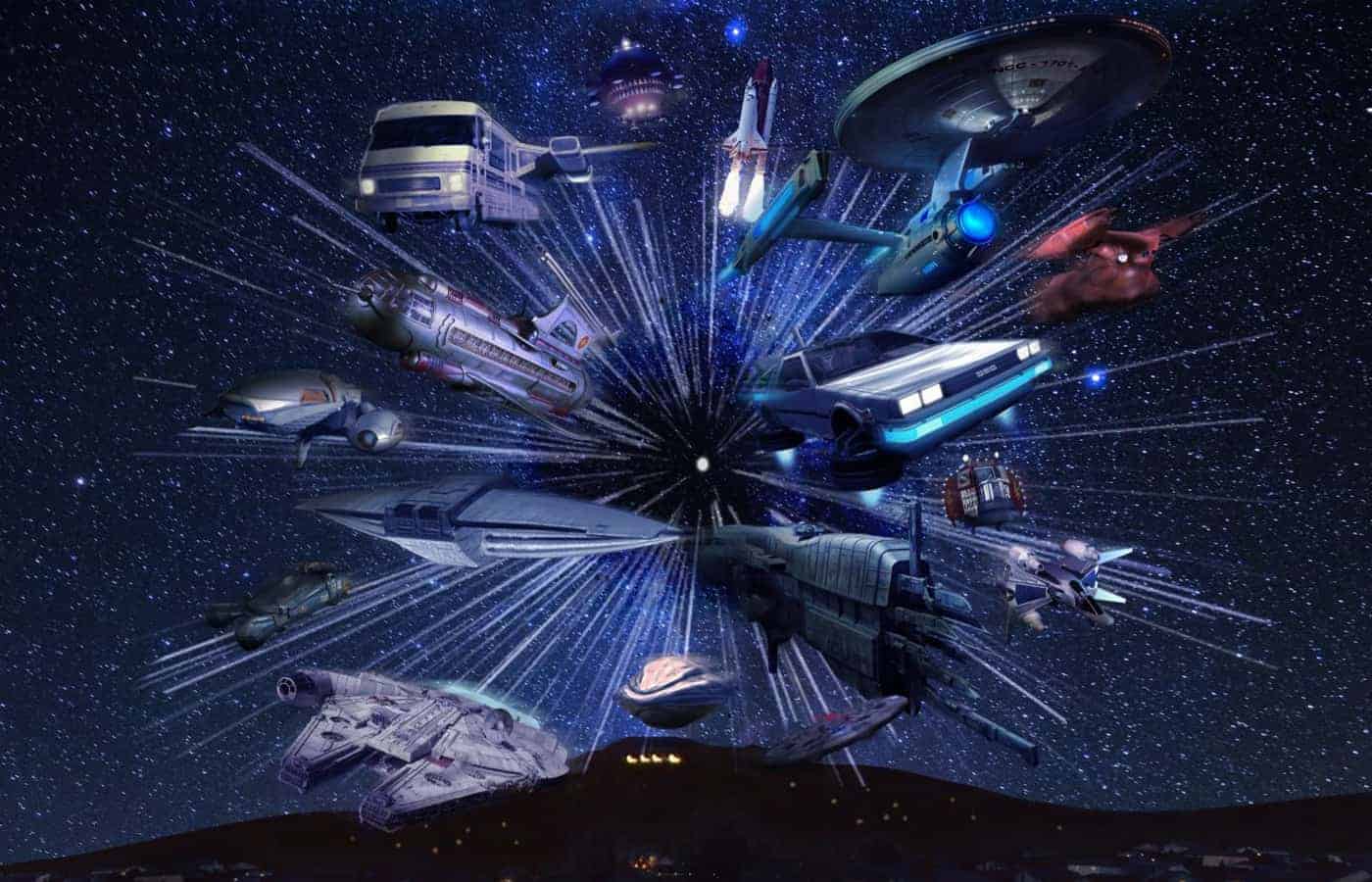 In Search of Tomorrow is a sci-fi documentary of epic proportions that must be enjoyed by genre fans at every level. Dive headfirst with us into the mind of the documentary’s director, David Weiner.

An Interview With David Weiner

Tell us, what culminated into making In Search of Tomorrow?

David Weiner: When it came to genre entertainment in the ‘80s, there was so much imaginative output. Great filmmakers and producers ranging from Steven Spielberg and Ridley Scott to Gale Anne Hurd and Roger Corman were populating theaters and video stores with escapist entertainment in the sci-fi, fantasy, action, and horror realms.

After tackling the action genre with In Search of the Last Action Heroes and the horror genre with In Search of Darkness (parts I & II), Robin Block’s CreatorVC established a winning documentary/community-driven formula that tapped directly into every fan’s nostalgia for the content of this amazing decade. The positive response to those films was huge. A super doc on Sci-Fi movies was the natural progression — and a personal favorite landscape of mine.

Why do you think nostalgia is so important in the film industry?

David Weiner: We all have fond memories of where we were — and who we were — when we first saw these films during our childhood and adolescence, whether it was in the theater, the drive-in, our homes, or a friend or relative’s den. There’s a sense memory, like a summer song, of why so many of these films brought us happiness into our hearts, if not simply a couple hours of escape from reality.

Being able to return to so many of these films, to share the love of these projects with new stories from the actors and filmmakers themselves, and to discover new facts and perspectives on them is an invaluable proposition.

We touched on this in our first interview together. You just simply can’t tackle every movie you want in documentaries like this. Was your process in deciding who to have be a part of the film different in any way?

David Weiner: The first In Search of Darkness had a cast of close to 50 interview contributors, and it was important to me to include a solid variety of actors, filmmakers, artists, composers, and experts to tell the tale of ‘80s horror. For In Search of Tomorrow, we have more than 75 contributors and counting, but the approach remains the same — a wide variety of voices and perspectives from icons of the era who have the best experiences to share.

There are too many films in a decade to tackle in one documentary, even at four-plus hours, but the idea is to bring attention to as many as possible through the voices of the era, and then let the viewer explore even more about them if they choose to.

In what way do you think the Sci-Fi genre is headed?

David Weiner: The sci-fi genre has always been popular to a niche audience, and in the past few decades it’s really opened up to a broader, more welcoming community. Science fiction is incredibly rich in that it often straddles many subgenres in its storytelling, limited only by one’s imagination or fields of interest. The best sci-fi tales reflect present-day issues, of which there are more than our share to tackle these days, directly and metaphorically, in any type of media format.

David Weiner: In Search of Tomorrow will be structured similarly to In Search of Darkness, charting film releases from 1980-1989 with larger-context-theme chapters in between. Visual and special effects are strongly tied into the sci-fi genre, and the ‘80s represented an explosion of ideas and capabilities in the craft of filmmaking, with companies like Industrial Light and Magic leading the charge and becoming the film industry standard.

I’m excited to have the likes of SFX legends John Dykstra, Dennis Muren, Phil Tippett, and Douglas Trumbull joining us in In Search of Tomorrow to talk about that era, and the evolution of special effects.

It looks like In Search of Tomorrow made a killing with crowdfunding backers. In Search of Darkness wasn’t anything to turn your nose up at. But this time around, the backer turnout was amazing! What do you think made people want to back this project so strongly?

David Weiner: We were just as surprised as anyone at the impressive response to our initial In Search of Tomorrow Kickstarter. It just goes to show that not only is there a huge audience looking to walk down memory lane when it comes to ‘80s sci-fi movies.

However, if you cast a wide net over a decade’s worth of genre filmmaking, you can include a sizable amount of disparate fans who can come together to celebrate films as diverse as Star Wars, Back to the Future, The Terminator, The Road Warrior, Ghostbusters, Spaceballs, Repo Man, Akira, Brother From Another Planet, Buckaroo Banzai, Escape From New York, WarGames, Weird Science, Transformers: The Movie, and the Christopher Reeve Superman movies. I can go on and on.

We are running an Indiegogo for pre-orders from April 8 through May 4, and I invite people to check it out at 80sscifidoc.com.

We read this quote on Nerdist. [Following In Search of Darkness] “In Search of Tomorrow promises to be an even more ambitious film journey worthy of the amazing content”. Tell us a little about what you meant when promising this to the fans.

David Weiner: So many films, so much imagination, so much love for a genre by so many. It’s a tall order to tackle, but given the wider scope of filmmaking — from studio tentpoles to indie scrappers — there is a lot of ground to cover. We won’t be able to do it all, but I am incredibly ambitious in my approach to such a massive subject.

David Weiner: The No. 1 film that people singled out as missing from In Search of Darkness was Aliens. While that film is the ultimate hybrid of sci-fi, action, and horror, I’ve always considered it to be a science-fiction classic. Knowing I would be able to direct In Search of Tomorrow, I chose to save it for the new documentary.

The trick now is to find a way to cover such films as The Thing, The Fly, They Live and other films featured in In Search of Darkness in such a way that it does not tread too much similar ground as my ‘80s horror documentary — and that would be to focus more on the big ideas, concepts and technology and less on the blood and guts.

When and where can everyone find In Search of Tomorrow?

David Weiner: In Search of Tomorrow is currently in production, aiming for a Christmas time 2021 release — go to 80sscifidoc.com now to pre-order, get your name in the credits, and receive a cool package of exclusive posters, shirts, enamel pin, and other goodies. I’m actively interviewing the cast as we speak, and happy to be able to do so safely, considering the complications and delays we’ve experienced over the last year due to COVID.

The most important question of all: What’s next?

David Weiner: Great question. CreatorVC has a lot on its plate right now, including a pair of videogame-related documentaries in development, In Search of Pixels and First Person Shooter, and In Search of Darkness ‘90s. Next up for me in terms of writing/directing is In Search of Darkness: Part III, as so many viewers, have expressed a desire for yet another installment of the series. After that, I’d love to tackle fantasy films of the ‘80s and another chapter of In Search of Tomorrow. So much nostalgia, so little time!

What David Weiner does best with his documentary epics is making sure the viewer gets a full idea of the genre. The encapsulation comes from the heart and it shows. Go to 80sscifidoc.com now to pre-order your copy of In Search of Tomorrow, today!