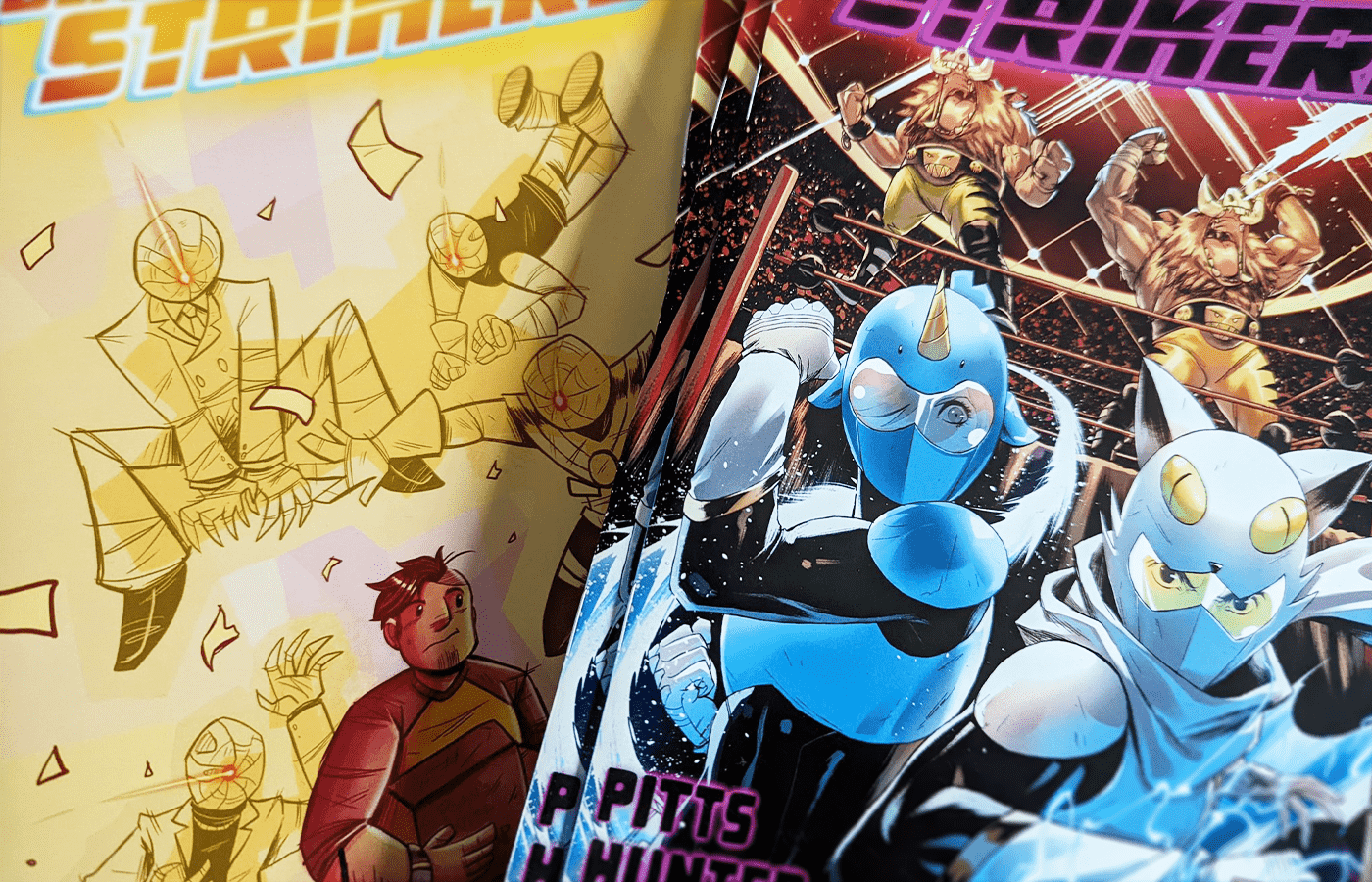 We have been seeing a rise of comic books from both major publishers and indie creators that are heavily inspired by the Tokusatsu genre. From Marvel’s Ultraman comics, Boom! Studios’ various Power Rangers series and the new indie series Ultra Mega, the comic medium in the west has been increasing with Toku-related stories.

Hello Joe, it’s nice to get to talk to you! Mind giving our readers a quick introduction to who you are and your comic Beast Heart! Strikers?

Hi there! I’m Joe Hunter, I’m a comic artist from the desolate hellscape of Ohio, and I make a comic called Beast Heart! Strikers along with my friend and co-creator Lan Pitts.

BHS is a love letter to tokusatsu, 80s and 90s anime and manga, cryptozoology, and a dash of pro wrestling in handy comic book form. It’s about five young people from across time brought together and given powers by the magical space-time ghost of an alien princess to defend the Earth from the machinations of her twin sister and the forces that destroyed her planet 10,000 years ago.

It’s clear your comic Beast Heart! Strikers is a clear love letter to the Tokusatsu genre a la Power Rangers/Super Sentai, what led you to create a comic on this genre?

Well depending on how far you want to go back, it kinda started with watching Godzilla and Wuxia movies and Batman ‘66 with my grandmother? I watched Power Rangers like any other 90s kid, but my love started with a Godzilla suit being dragged by wires in a clumsy facsimile of a flying kick while fighting alongside a mildly creepy Ultraman knockoff.

I met Lan through Twitter and we got to talking, turned out to have a lot of the same interests, and BHS just… happened from there. I remember his original idea was something similar to Jetman, so we ended up talking about different animals. I had suggested the Pangolin for our Yellow and he went with it. He suggested Narwhal for our Blue and it just went from there.

Our collaboration process is pretty simple as we’re pretty much on the same level with what we want out of our story and characters. Plus, we’re both giant fucking weirdos so it works very well.

What would you say are the major influences on your artwork for Beast Heart! Strikers?

Oh god uhh… where to start. I’m so bad at talking about art because I don’t feel like I’m smart enough. I feel like there’s a lot of Shane Glines/Bruce Timm and Rumiko Takahashi in my art? Maybe? I started getting into the idea of making my own comics after I bought the original printing of the Nintendo Power Legend of Zelda comic by Shotaro Ishinomori when I was 10 so that’s sort of always in the back of my mind. Chynna Clugston Flores, Naoko Takeuchi, Go Nagai, Ken Ishikawa, Kenichi Sonoda… if I keep going I’ll wind up typing forever.

Lately, we are seeing major influences of the Tokusatsu genre within both mainstream comics and indie comics (ie Marvel’s Ultraman comics, Boom! Studios’ Power Rangers comic, Image Comics’ Ultra Mega). What do you think the Tokusatsu brings to Western comics that is different from usual comic tropes and conventions?

That’s a good question, but also brings to mind why it isn’t bigger over here in the States. Manga and anime are thriving in areas of sales with all sorts of merchandise and exposure, but Kamen Rider, Ultraman, and all that sort of thing still feel like a subculture of fandom. What Kyle, Ryan, and now Mat have been doing with the Power Rangers mythos has been absolutely phenomenal.

What James was doing with Ultramega felt new, but at the same time very familiar as well. What I think Toku brings to comics is that it all feels very high stakes. Usually, certain angles and stories are reserved for say, Silver Surfer, Green Lantern, or even the Avengers but with Ultraman, those battles are an almost everyday occurrence.

Plus just look at these monster designs! The only thing that comes too close to character design is maybe Saga for just being so out there.

When working on Beast Heart! Strikers with your creative team, mind telling our readers the process of making an issue of the comic?

Well, we have a vague outline/plan for 36 issues that we laid out in a haunted bar in Baltimore. Lan writes a script, I start drawing, and stuff changes based on ideas that crop up in the process of doing the thumbnails and pencils, ink, and color, Lan will write a final lettering script that we’ll go over, before handing off the script and art to our absolutely kickass letterer Frank Cvetkovic to… letter.

What would you say are the major difficulties of working as an indie comics creator?

Time, money, burnout, having to do your own promo…it all adds up

What is some advice you would give to aspiring independent comic creators?

Just go for it. The bar to entry is insanely low anymore.

Thank you again for speaking with us! Let our readers know where to check out your comic!

Thanks for having me! We’re going to try and get BHS back online in the next month or so since Comixology hit the self-destruct button. #ThanksBezos