We look NOPE in the eyes to unravel the mysteries and motifs of Peele’s latest sci-fi-thriller. 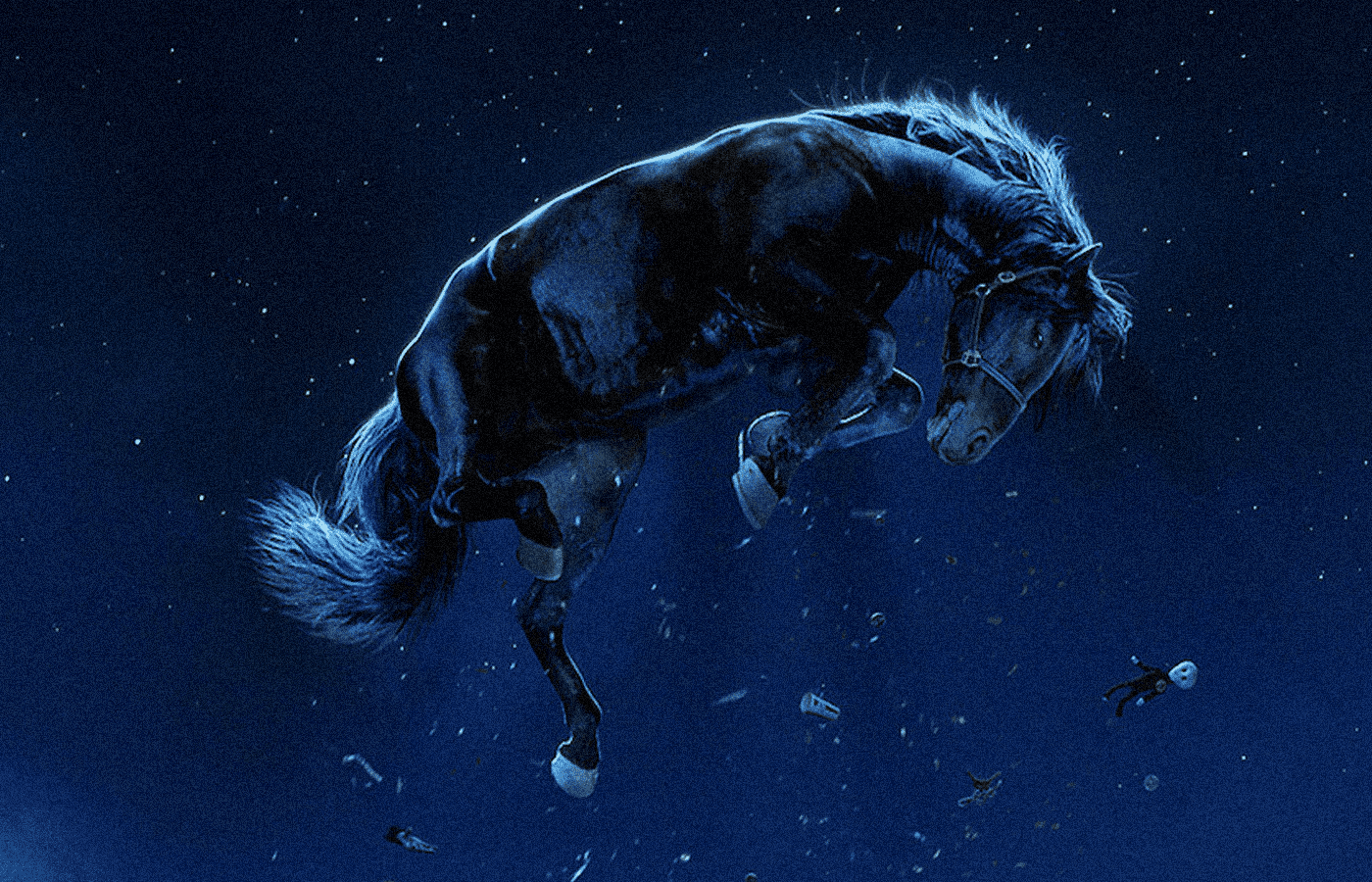 In his third time in the director’s chair, Jordan Peele tackles extra-terrestrial terror and so much more. NOPE is far more subdued with its messages and morals than Peele’s previous outings Us and Get Out, but is loaded with breadcrumbs and puzzle pieces about what’s happening at the Haywood ranch and the deeper commentary beneath the surface.

That said, massive spoilers from here forward as we break down the characters, themes, and motifs of Jordan Peele’s sci-fi Summer spectacle.

The film opens with a shot of the “Gordy’s Home! Incident”, the horrific crux of the story. Gordy’s Home! was a popular sitcom in the mid-90s about the Houstons and the newest member of their family, Gordy. The show is a twist on ALF, where instead of featuring an alien living with a suburban family, Gordy was played by a pair of live chimpanzees. The comparison goes further because in the opening sequence for the show Gordy can be seen wearing a Hawaiian shirt (which can also be seen in Jupe’s mini-museum), and his name might be a wink at Alf’s TV character – Gordon. Gowan’s (You’re A) Strange Animal serves as the show’s theme song, its lyrics tie nicely into the parallel between ‘Gordy’, and the strange saucer later in the film. You’re a strange animal, that’s what I know.

During the taping of the Season 2 episode “Gordy’s Birthday” in 1998, one of the chimps is upset by a popping balloon and attacks the cast. We are shown glimpses of the violent aftermath, which is strikingly reminiscent of real news stories of chimp attacks. Miraculously, Ricky ‘Jupe’ Park makes it through the ordeal physically unharmed. But he carries the trauma of that experience with him for the rest of his life, and in that sense, Gordy paves the way for much of the havoc on Haywood ranch.

A former child star, Jupe’s past haunts him and his memories of Gordy influences his decisions whether he knows it or not. When he notices the UFO, he envisions that it is a craft full of people who have come to watch him – just like everyone has since he was young. He dubs them “Viewers”, like a TV audience. During the 6 month lead-up between the UFO’s first arrival until OJ spots it, Jupe has been “training” it to become an attraction for his amusement park. But really he’s just been teaching it that Agua Dulce is prime real estate for steady meals.

Jupe’s namesake is his character Jupiter from “Kid Sheriff”, a movie he was in before Gordy. Jupe wears his Kid Sheriff history on his sleeve but carries his Gordy history in his head. At his Star Lasso Experience show, he sells dolls and costumes of what he perceives these Viewers to look like and they bear a striking resemblance to his former chimp co-star. At the first performance with an audience, Jupe claims that he has a connection with the UFO and that it has visited him every Friday at 6:13 pm. A few scenes earlier, his only direct description of his experience in the tragic taping was that it was “6 minutes and 13 seconds of havoc”.

He believes that he has a special bond with the Viewers now because he was spared by “Gordy”, he learned the wrong lessons about working with wild animals and he wasn’t so lucky the second time. Jupe’s big scheme backfires big time when the saucer forgoes the horse to instead grab Jupe himself and his tasty-looking audience. The shocking scene is made all the more gruesome when you realize the 40+ attendees were invited guests for a special “Friends and Family” performance. From his mini-museum of Gordy swag to cashing in on his child star fame as Jupiter, and finally, Star Lasso starring the hungry cloud – Ricky Park made a living harnessing spectacle (both good and bad) for clout, and that’s what did him in.

RELATED: Seeing Red: The Adelaide In ‘Us’

Otis Jr is on the opposite side of the same coin as Jupe. Both grew up in showbusiness, and both worked with animals. Jupe was in front of the camera, but OJ worked behind it. When OJ studies the movements and behaviors of the UFO, he realizes it’s not a craft at all. It’s a hungry predator who has been enabled by their naive neighbor, Jupe. OJ hangs the nickel that killed Otis Sr. in much the same way Jupe keeps the remnants of the Gordy disaster. The coin might be a nod to Nickelodeons, the earliest movie theaters named for their cost of admission.

After the loss of their father, OJ and Emerald handle the grief in opposite ways. OJ becomes very reserved and narrow-minded, focusing on his duties around the ranch and keeping his father’s legacy. Emerald is very impulsive and tries a laundry list of skills (like sewing, and motorcycle stunts, all of which come in handy in act 3!) for notoriety.

That obsession with fame, with being seen, is soon focused on their otherworldly visitor. OJ and Em’s views start to merge when her obsession with getting it on film, and his need to put their father’s teachings to the ultimate test to tame the beast – go hand in hand. When shit hits the fan on the Ranch, their reaction isn’t to get the hell outta dodge and save themselves. It’s to devise a plan to beat the creature at its own game, lure it out and show the world. Get the “impossible shot” by looking at it, and living to tell the tale. That’s the catch-22 of the beast, it craves to be seen so it can eat. But it punishes all who look at it. It demands your attention and consumes you for obliging it.

The most direct notion of NOPE’s anti-voyeurism is personified in the “TMZ”, “Man In Black”, a character credited as Ryder Muybridge. The name is a reference to Edward Muybridge, who published the horse/jockey photographs referenced early in the film. The mysterious character arrives once OJ, Em, and the gang are in full Jaws mode. He is obnoxiously reliant on his camera and is obsessed with capturing every moment and being seen.

He arrives and quickly interrogates Emerald, and offers to put her “on TV” as if it is a big reward. When he ignores their warnings and rides his motorcycle in the range of Jean Jacket, he is horribly mangled in the crash and spends his final moments begging OJ – not to save him – but to capture his injuries on film. He’s the embodiment of Jupe and Emerald’s need to be seen, amplified to ludicrous extremes.

The creature itself, lovingly dubbed Jean Jacket after a horse that caused a rift in OJ and Emerald’s relationship, represents a chance for them to come together. Reminiscent of a giant eye-in-the-sky, the creature takes the shape of a 50s-esque flying saucer to evade detection. Jupe describes that the saucer is not perfectly round, as it has flat edges in the front of the disc. This is a clever nod to the Kenneth Arnold UFO sighting in 1947, in which Arnold reported seeing crafts with that unique shape. It’s regarded as the first modern UFO sighting, and coverage of the report coined the term “Flying Saucer”. Even it desires to be seen. Yet it rewards those that look upon it by eating them. The ultimate spectacle, the mythical proof of alien life, something all characters can’t resist gazing at.

Jean Jacket is parallel to OJ’s horse Lucky, and Jupe’s co-star “Gordy”. The three are wild animals, who need to be respected. At the film shoot, Lucky is mishandled against OJ’s warnings. “Gordy’s” chimp actor is treated as a performer and not a wild animal. And Jean Jacket is treated by Jupe the same way. Another connection is balloons, “Gordy” is upset by a balloon popping in the heat of the stage lights, and Jean Jacket is ultimately undone by a popping balloon. It’s like poetry, it rhymes. Ricky ‘Jupe’ Park accidentally invited Jean Jacket for dinner, and a cartoon balloon of Jupiter sends the creature packing.

A very strange and unusual thread throughout the film is allusions to The Wizard of Oz. After Emerald and OJ see Jean Jacket, Emerald falls asleep while watching interviews about UFOs on her phone. The interviewee mentions not having “a way home, I couldn’t click my ruby slippers together”. Jean Jacket’s ‘tractor beam’ also resembles dusty tornadoes on the farmland. And the day is saved by what’s kind of a hot air balloon. Jupe’s co-star he invited to the Star Lasso show is wearing a hot air balloon brooch, which connects to the finale, and what triggered “Gordy”. If you think that’s a stretch, then considering Jupe imagines the Viewers look like Gordy… the UFO is kind of filled with… flying monkeys. There’s even a promo for the film set to “Somewhere Over The Rainbow”!  Not to mention Jean Jacket is ultimately beaten by Emerald – who shares a name with the name of The Wizard’s hometown. It’s definitely a weird connection.

NOPE is a rare treat that’s fully loaded with tiny details and connections that make a rewatch incredibly rewarding. It’s also full of amazing set visuals, from the blood-soaked farmhouse to Jupiter’s Claim amusement park. The most quirky note is that being a Universal Picture, the production teamed up with Universal Hollywood and had Jupiter’s Claim set carefully disassembled and moved to the backlot. Making NOPE the latest entry at Universal Studios Hollywood’s Tram Tour. It’s been announced as a regular feature of the daily tour for the foreseeable future. But who knows if the film will also take a starring role at Hollywood’s Halloween Horror Nights as well? With only a few weeks until opening night, we won’t have long to wait!